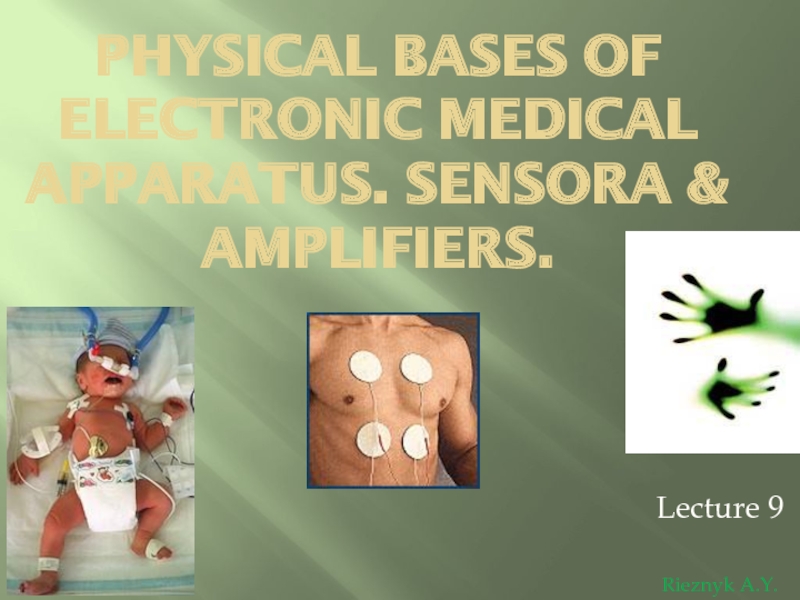 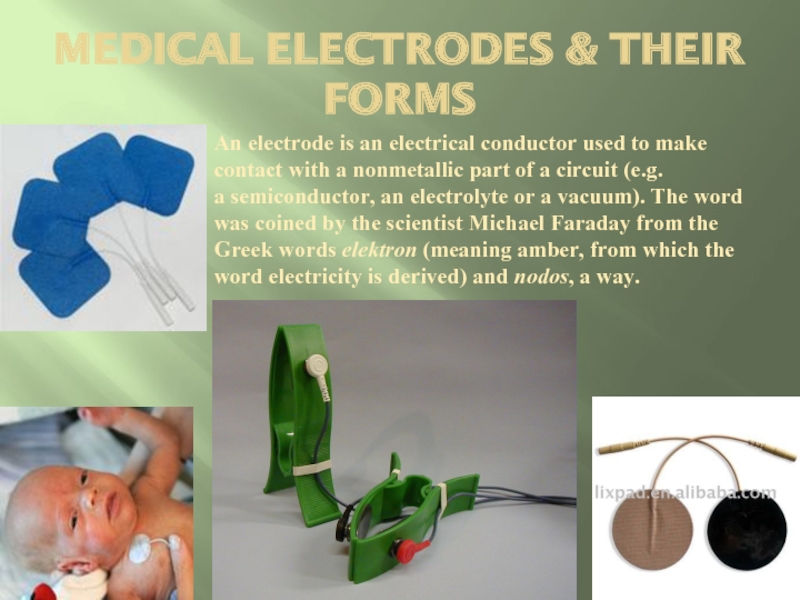 An electrode is an electrical conductor used to make contact with a nonmetallic part of a circuit (e.g. a semiconductor, an electrolyte or a vacuum). The word was coined by the scientist Michael Faraday from the Greek words elektron (meaning amber, from which the word electricity is derived) and nodos, a way. 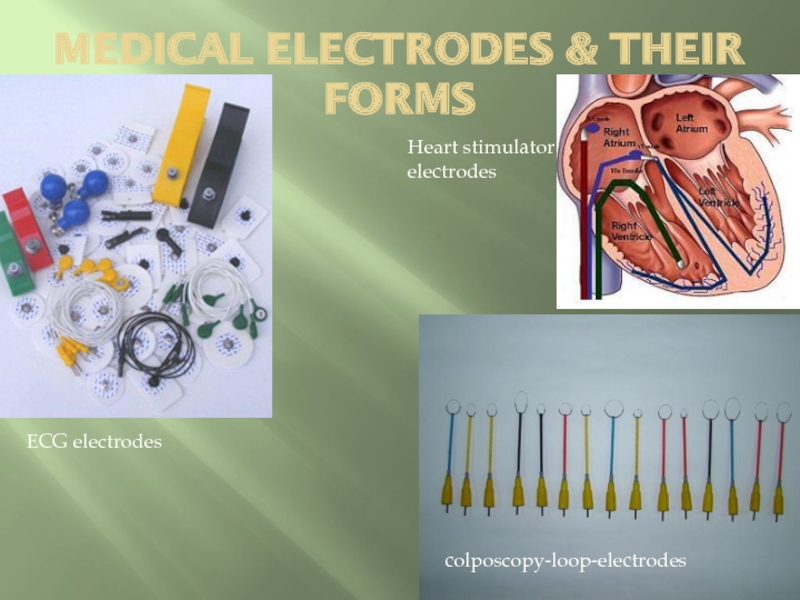 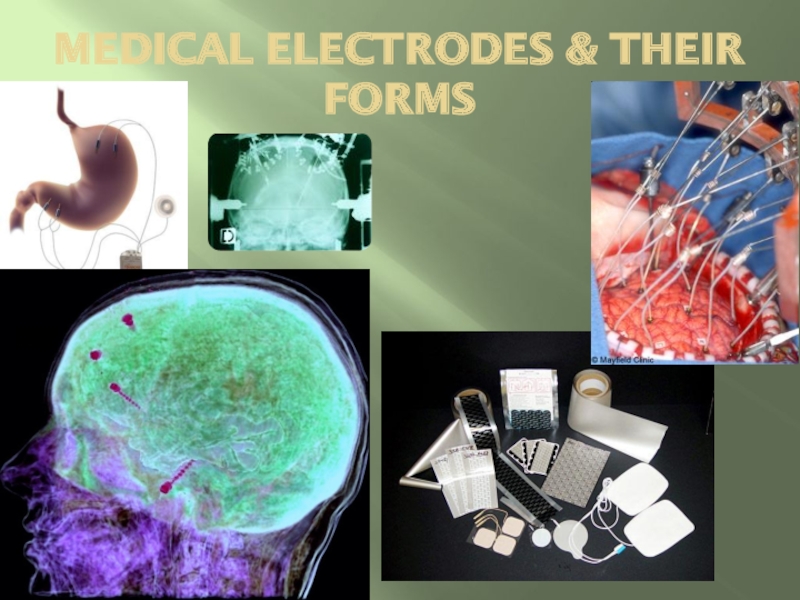 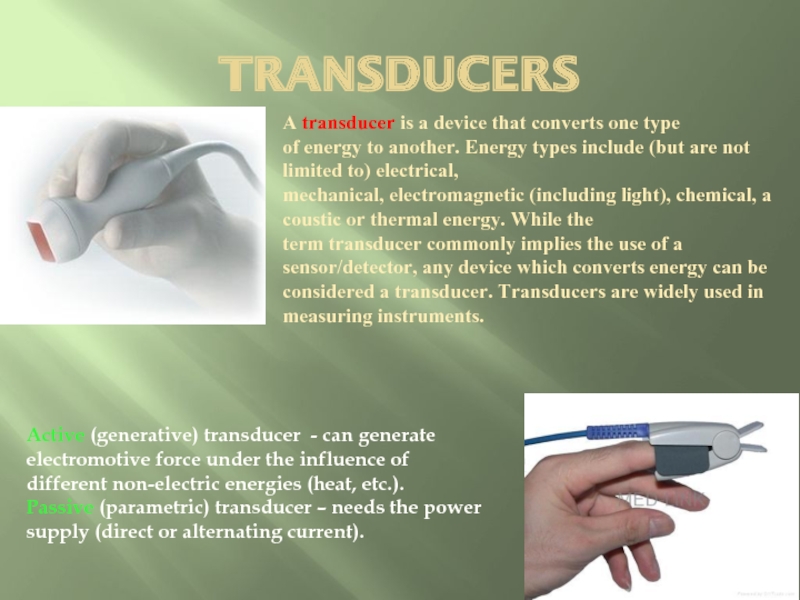 A transducer is a device that converts one type of energy to another. Energy types include (but are not limited to) electrical, mechanical, electromagnetic (including light), chemical, acoustic or thermal energy. While the term transducer commonly implies the use of a sensor/detector, any device which converts energy can be considered a transducer. Transducers are widely used in measuring instruments. 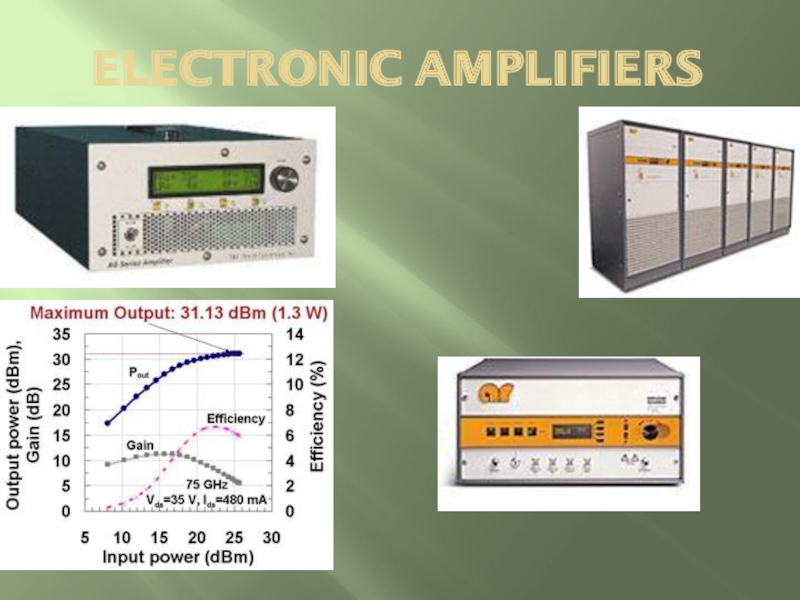 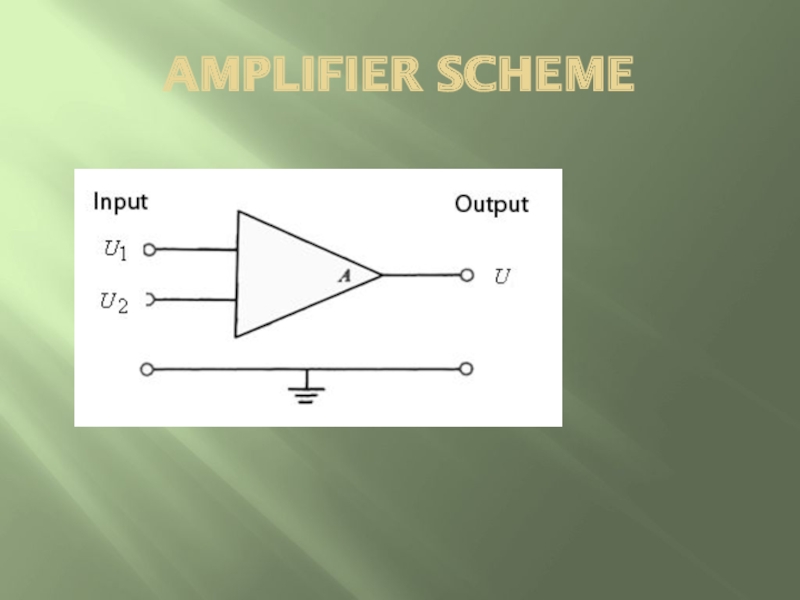 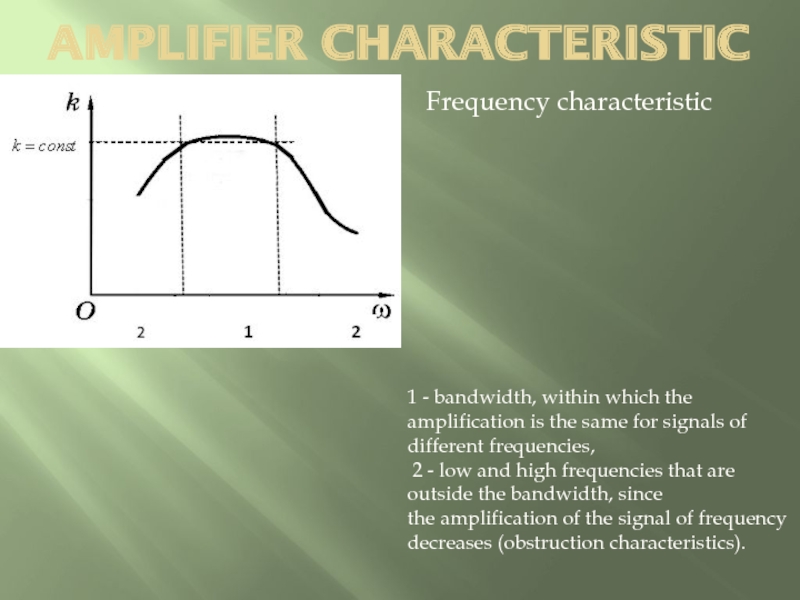 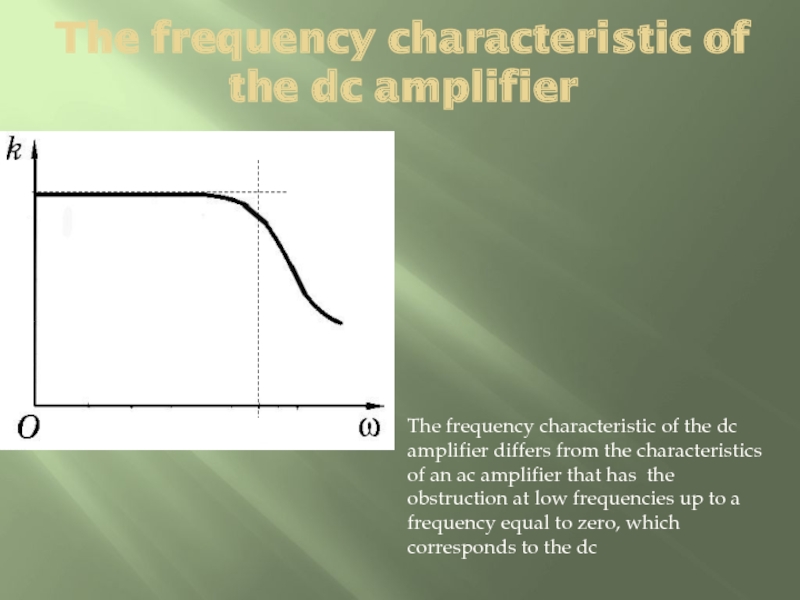 The frequency characteristic of the dc amplifier 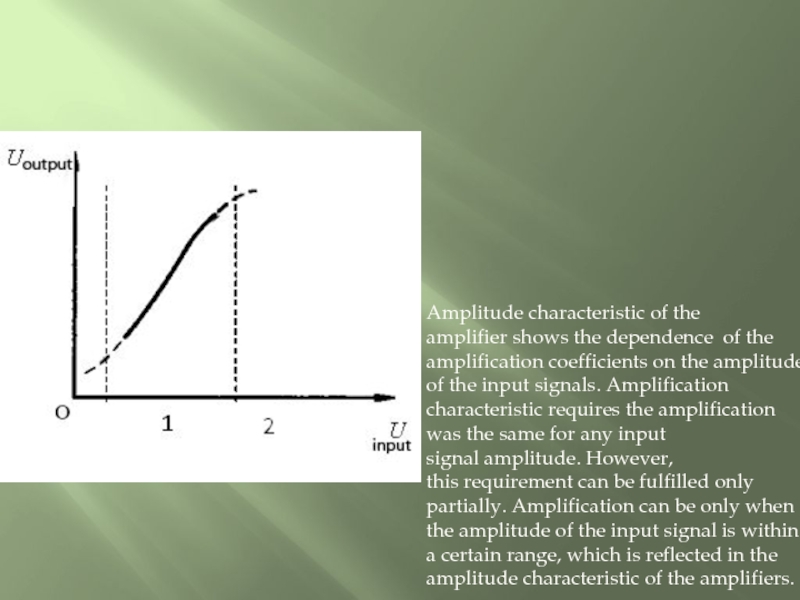 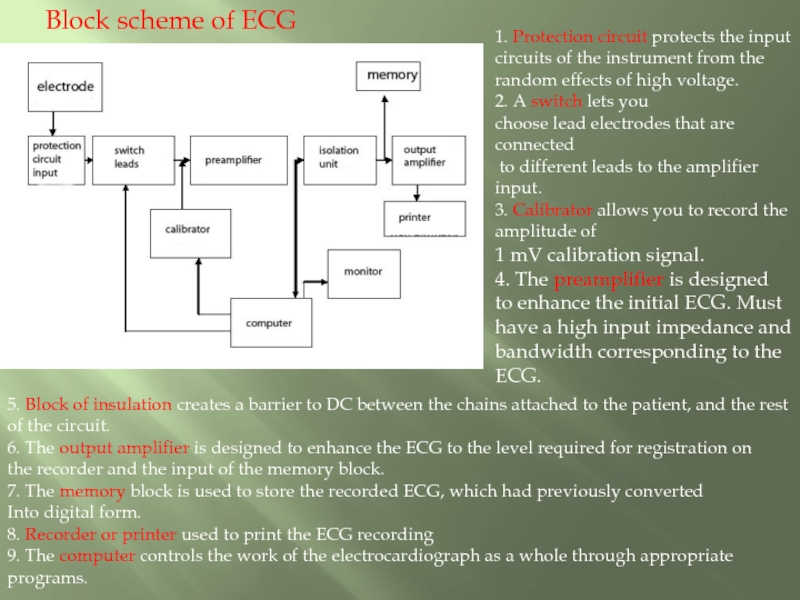 1. Protection circuit protects the input circuits of the instrument from the random effects of high voltage. 2. A switch lets you choose lead electrodes that are connected
to different leads to the amplifier input. 3. Calibrator allows you to record the amplitude of
1 mV calibration signal.
4. The preamplifier is designed to enhance the initial ECG. Must have a high input impedance and bandwidth corresponding to the ECG.

5. Block of insulation creates a barrier to DC between the chains attached to the patient, and the rest of the circuit. 6. The output amplifier is designed to enhance the ECG to the level required for registration on the recorder and the input of the memory block. 7. The memory block is used to store the recorded ECG, which had previously converted
Into digital form. 8. Recorder or printer used to print the ECG recording 9. The computer controls the work of the electrocardiograph as a whole through appropriate programs. 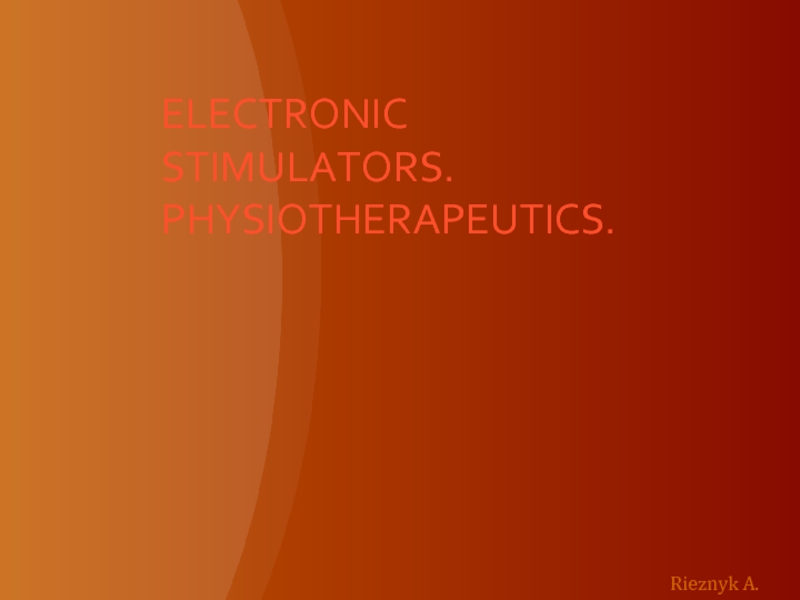 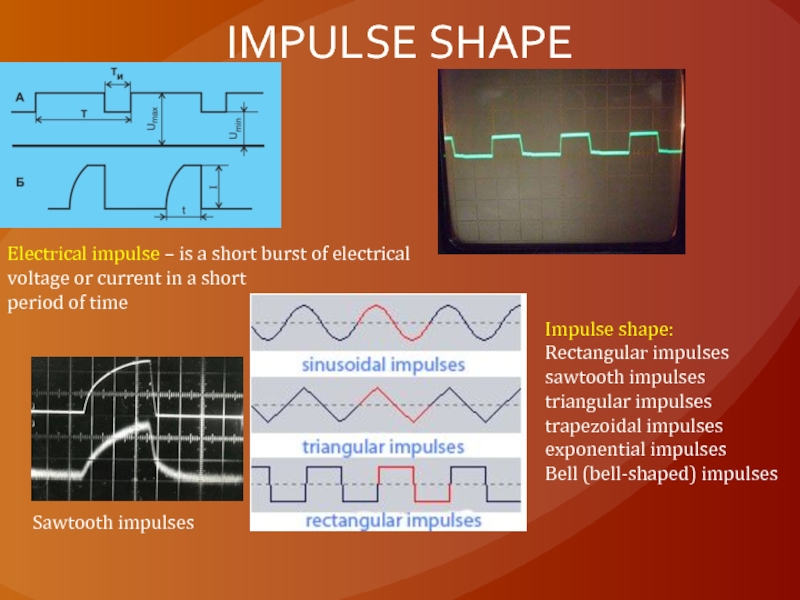 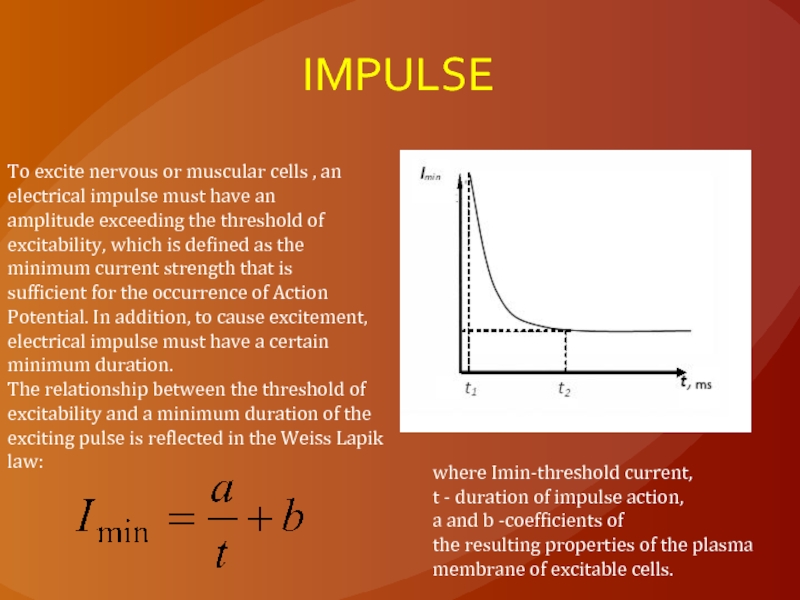 To excite nervous or muscular cells , an electrical impulse must have an amplitude exceeding the threshold of excitability, which is defined as the minimum current strength that is sufficient for the occurrence of Action Potential. In addition, to cause excitement, electrical impulse must have a certain minimum duration. The relationship between the threshold of excitability and a minimum duration of the exciting pulse is reflected in the Weiss Lapik law:

where Imin-threshold current,
t - duration of impulse action,
a and b -coefficients of the resulting properties of the plasma membrane of excitable cells. 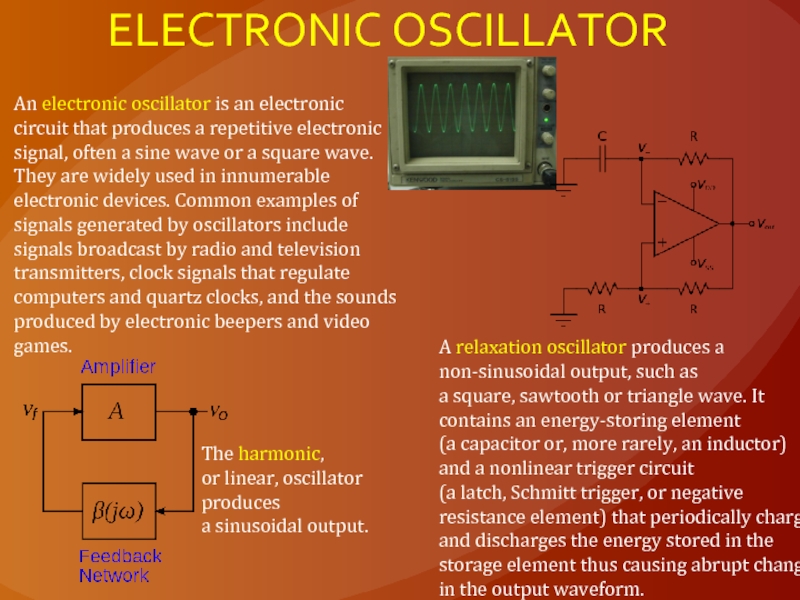 An electronic oscillator is an electronic circuit that produces a repetitive electronic signal, often a sine wave or a square wave. They are widely used in innumerable electronic devices. Common examples of signals generated by oscillators include signals broadcast by radio and television transmitters, clock signals that regulate computers and quartz clocks, and the sounds produced by electronic beepers and video games.

The harmonic, or linear, oscillator produces a sinusoidal output.

A relaxation oscillator produces a non-sinusoidal output, such as a square, sawtooth or triangle wave. It contains an energy-storing element (a capacitor or, more rarely, an inductor) and a nonlinear trigger circuit (a latch, Schmitt trigger, or negative resistance element) that periodically charges and discharges the energy stored in the storage element thus causing abrupt changes in the output waveform. 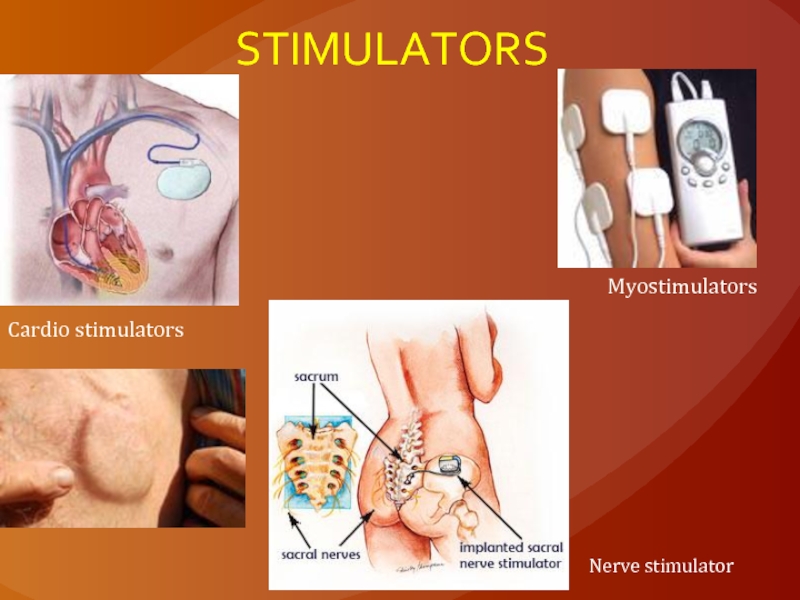 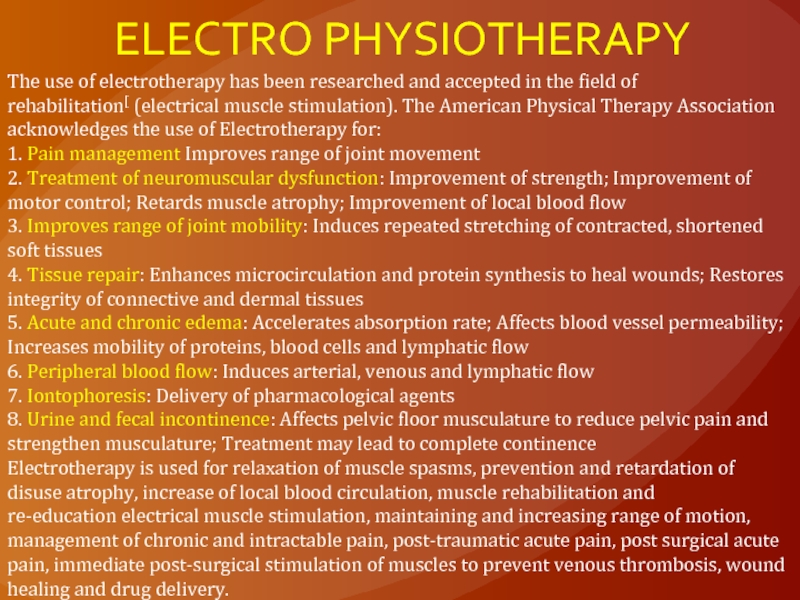 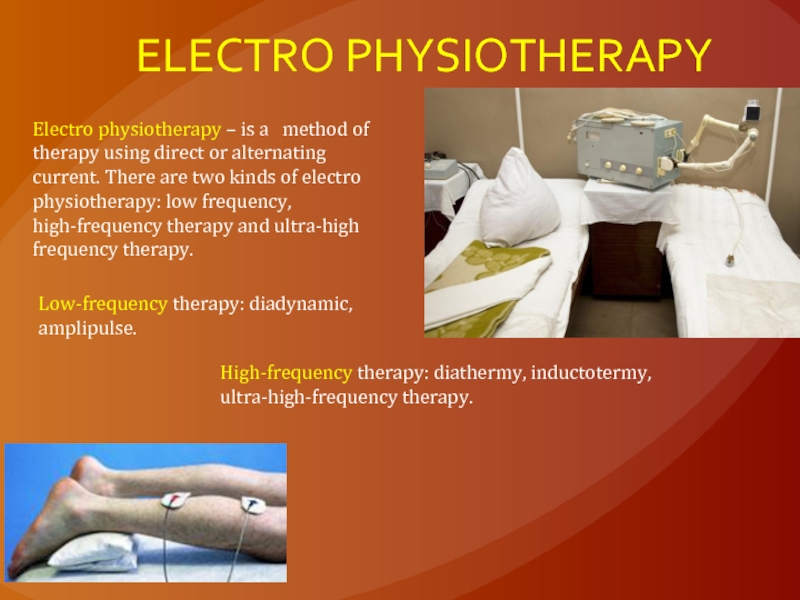 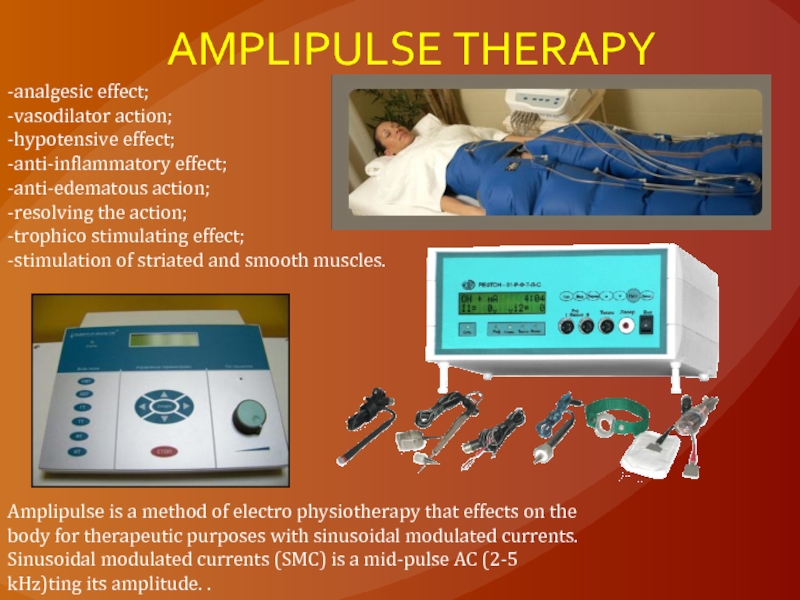 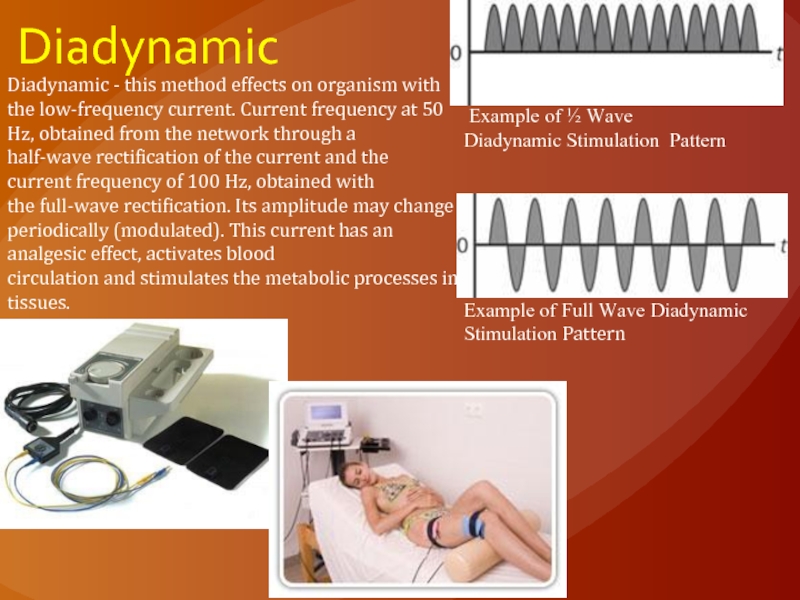 Diadynamic - this method effects on organism with the low-frequency current. Current frequency at 50 Hz, obtained from the network through a half-wave rectification of the current and the current frequency of 100 Hz, obtained with the full-wave rectification. Its amplitude may change periodically (modulated). This current has an analgesic effect, activates blood circulation and stimulates the metabolic processes in tissues. 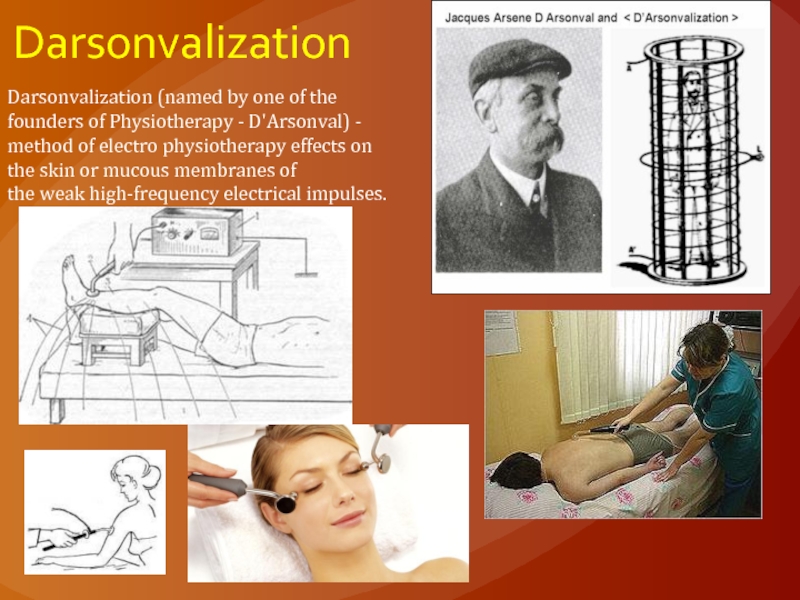 Darsonvalization (named by one of the founders of Physiotherapy - D'Arsonval) - method of electro physiotherapy effects on the skin or mucous membranes of the weak high-frequency electrical impulses. 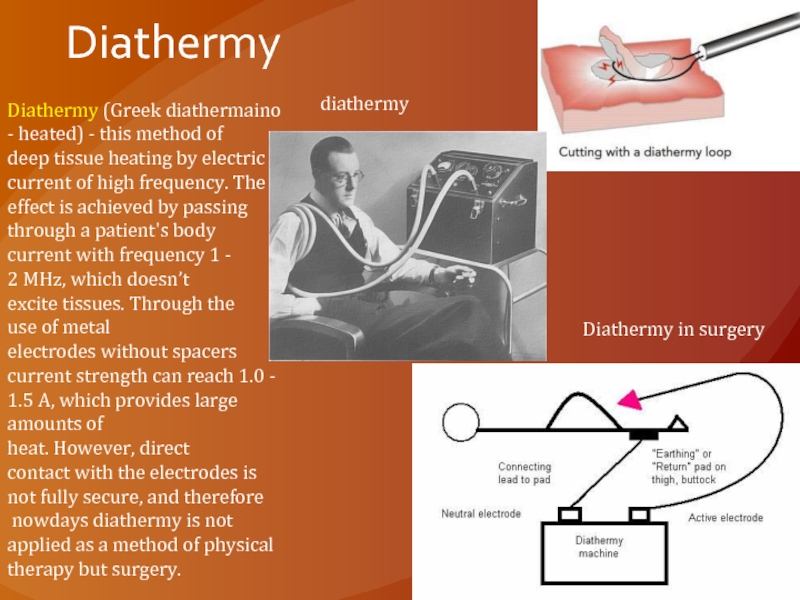 Diathermy (Greek diathermaino - heated) - this method of deep tissue heating by electric current of high frequency. The effect is achieved by passing through a patient's body
current with frequency 1 - 2 MHz, which doesn’t excite tissues. Through the use of metal electrodes without spacers current strength can reach 1.0 - 1.5 A, which provides large amounts of heat. However, direct contact with the electrodes is not fully secure, and therefore
nowdays diathermy is not applied as a method of physical therapy but surgery. 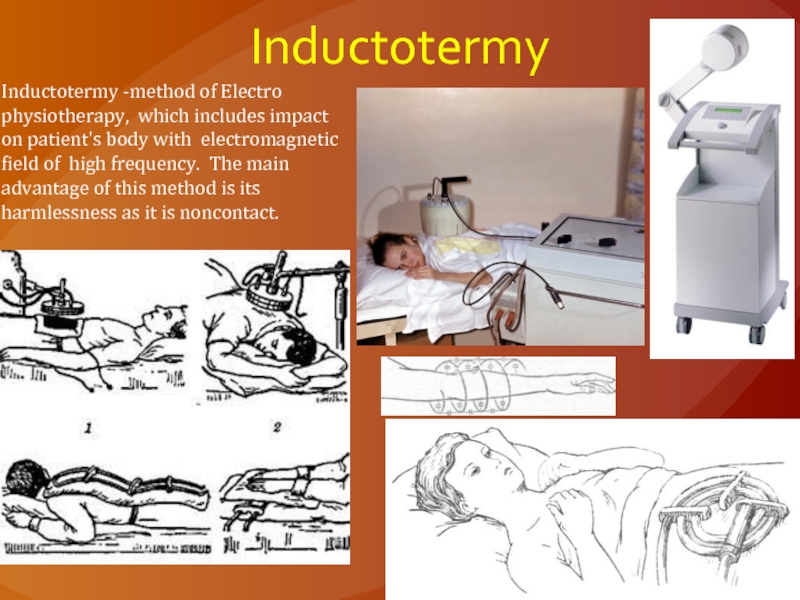 Inductotermy -method of Electro physiotherapy, which includes impact on patient's body with electromagnetic field of  high frequency. The main advantage of this method is its harmlessness as it is noncontact. 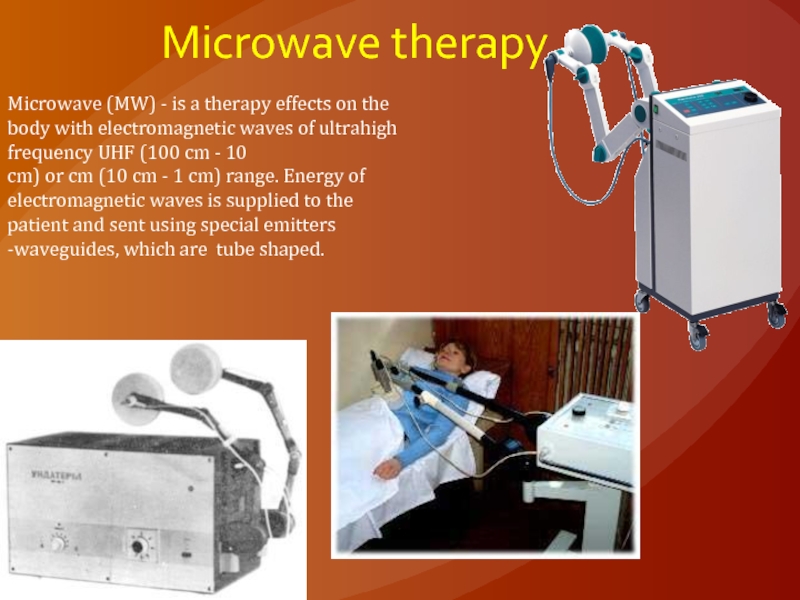 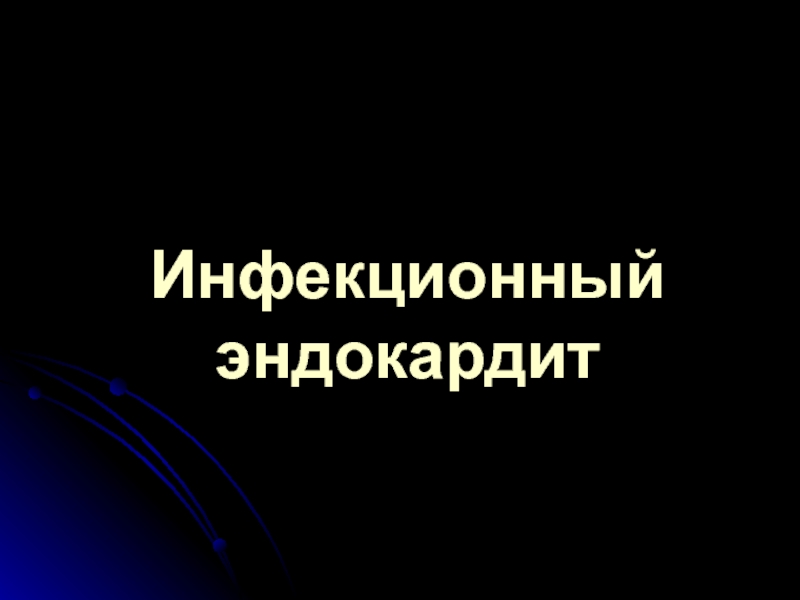 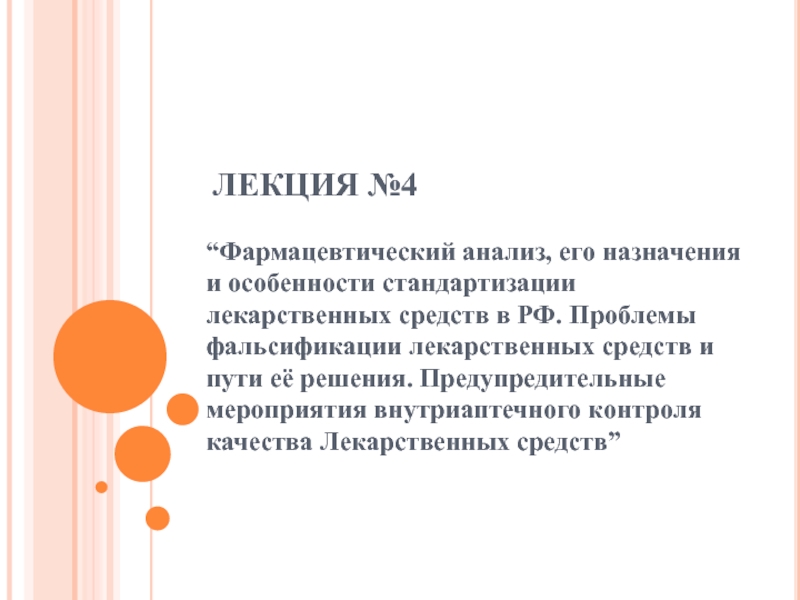 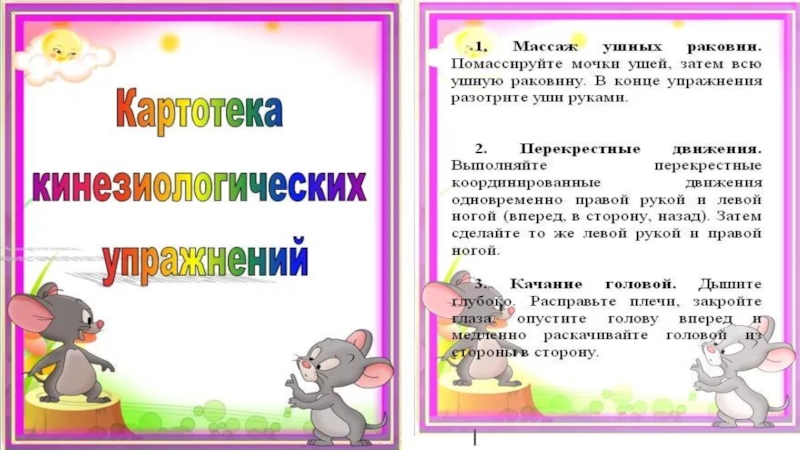 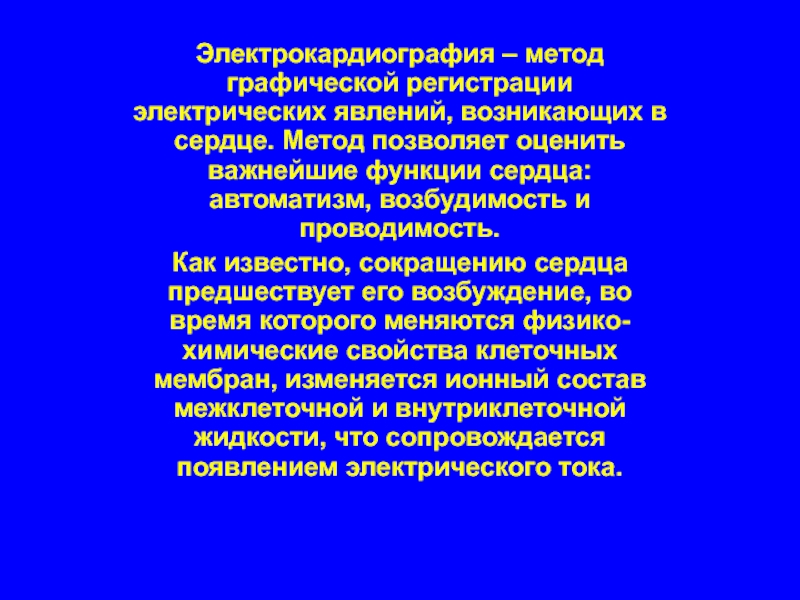 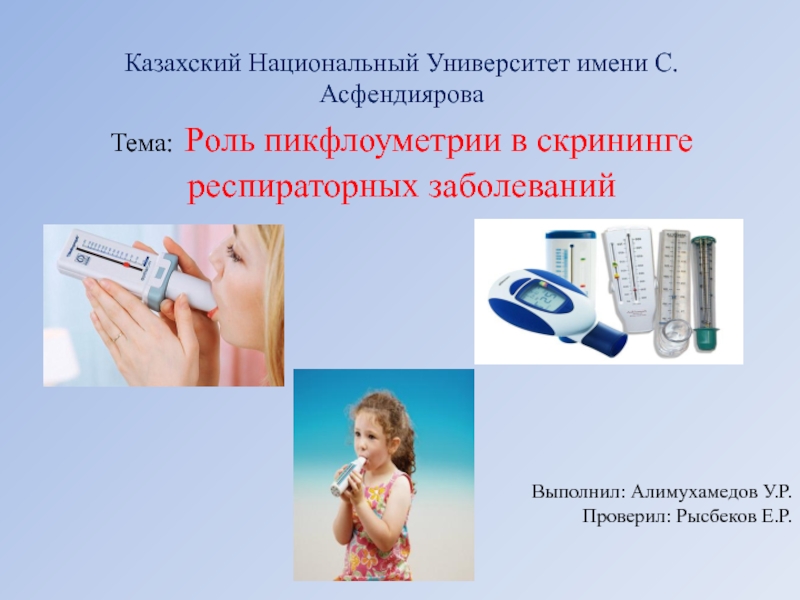 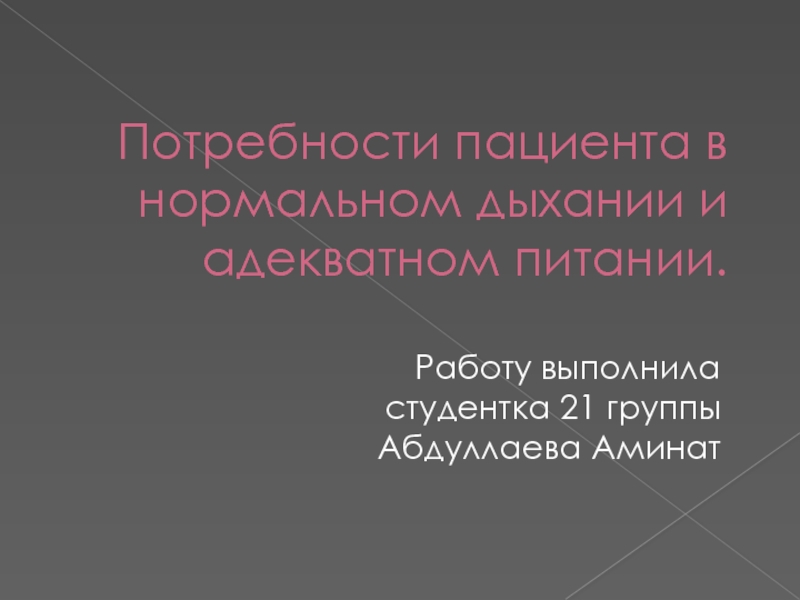