Atomium – one of the main attractions and a symbol of Brussels. The Atomium was designed for the opening of the World Expo 1958 by architect Andre Waterkeyn as a symbol of the atomic age and the peaceful use of nuclear energy and built by architects Andre and Michel Polak.

Construction, covered with aluminum layer initially, and then completed in February 2006 overhaul - steel liner consists of nine atoms, which are combined in a fragment of a cubic crystal lattice of iron magnified 165 billion times. The height of the Atomium is 102 m, weight - about 2,400 tons, and the diameter of each of the nine areas - 18 m. Six of them are accessible to visitors. Areas of interconnected pipes length of 23 m, containing escalators and connecting corridors. Total exists between the balls 20 connecting pipes. In the middle of them is a lift that can in 25 seconds to lift the visitors to the restaurant and sightseeing platform, located in the highest ball of the Atomium. 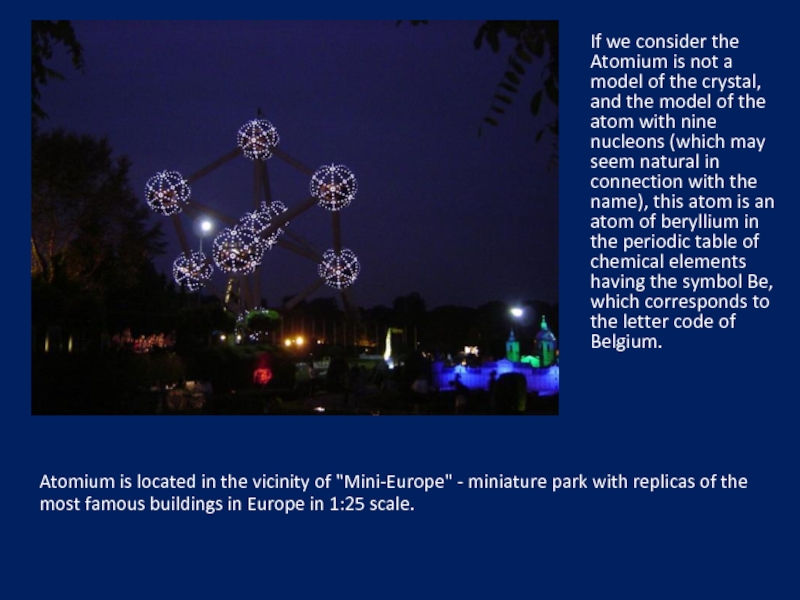 Atomium is located in the vicinity of "Mini-Europe" - miniature park with replicas of the most famous buildings in Europe in 1:25 scale.

If we consider the Atomium is not a model of the crystal, and the model of the atom with nine nucleons (which may seem natural in connection with the name), this atom is an atom of beryllium in the periodic table of chemical elements having the symbol Be, which corresponds to the letter code of Belgium. 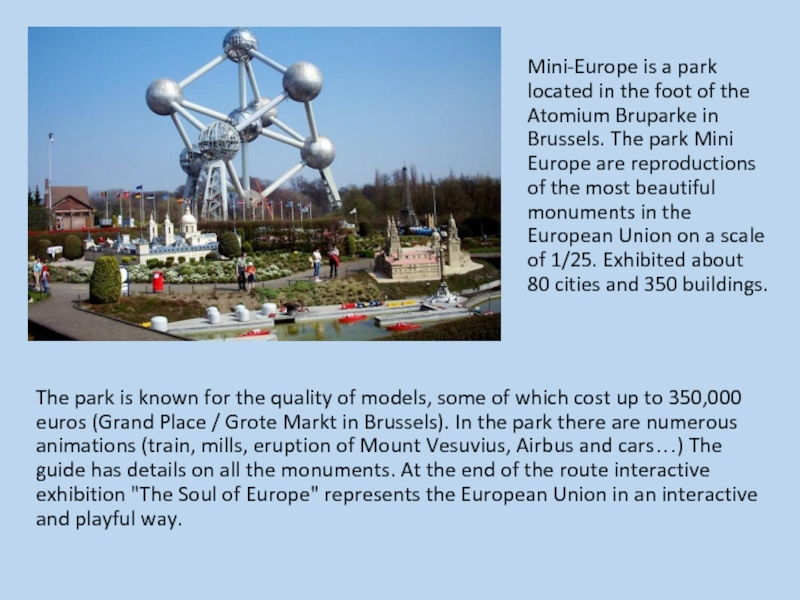 Mini-Europe is a park located in the foot of the Atomium Bruparke in Brussels. The park Mini Europe are reproductions of the most beautiful monuments in the European Union on a scale of 1/25. Exhibited about 80 cities and 350 buildings.

The park is known for the quality of models, some of which cost up to 350,000 euros (Grand Place / Grote Markt in Brussels). In the park there are numerous animations (train, mills, eruption of Mount Vesuvius, Airbus and cars…) The guide has details on all the monuments. At the end of the route interactive exhibition "The Soul of Europe" represents the European Union in an interactive and playful way.

The park is built on 24,000 square meters. The initial investment amounted to 10 million euros at the time of inauguration in 1989, at that time, the Belgian Crown Prince Philippe.

Thanks to 300,000 visitors a year and 3 million euro annual turnover, Mini-Europe is one of the first sights of Brussels.

The climate of Australia 46 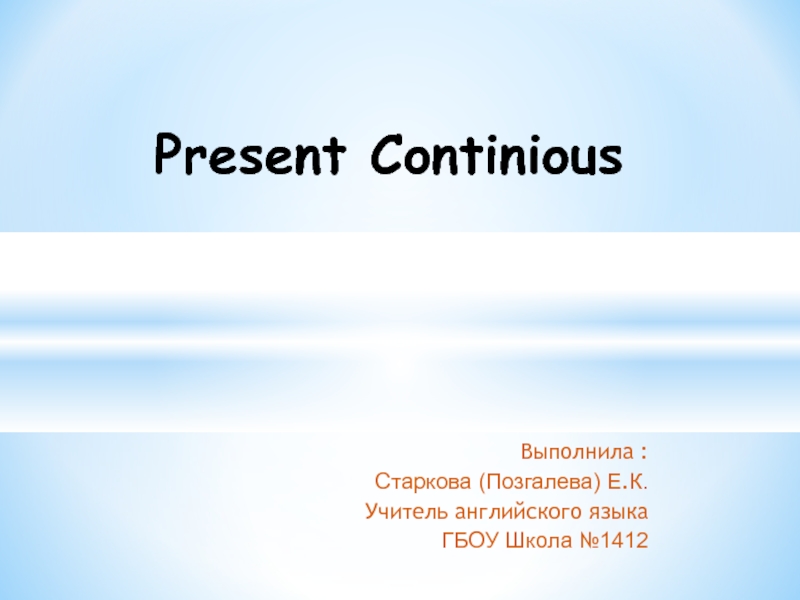 Assimilation is a phonetic process 981