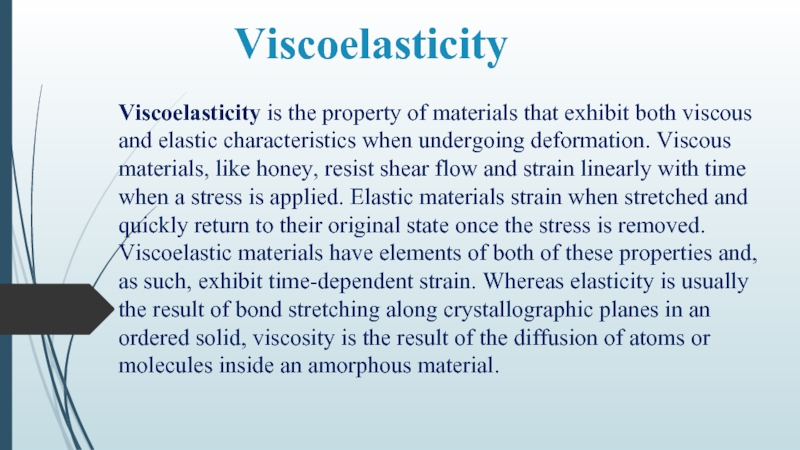 Viscoelasticity is the property of materials that exhibit both viscous and elastic characteristics when undergoing deformation. Viscous materials, like honey, resist shear flow and strain linearly with time when a stress is applied. Elastic materials strain when stretched and quickly return to their original state once the stress is removed.
Viscoelastic materials have elements of both of these properties and, as such, exhibit time-dependent strain. Whereas elasticity is usually the result of bond stretching along crystallographic planes in an ordered solid, viscosity is the result of the diffusion of atoms or molecules inside an amorphous material. 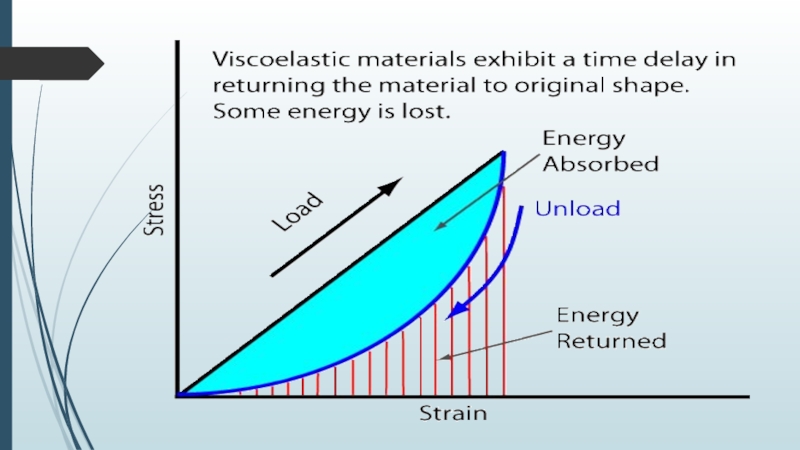 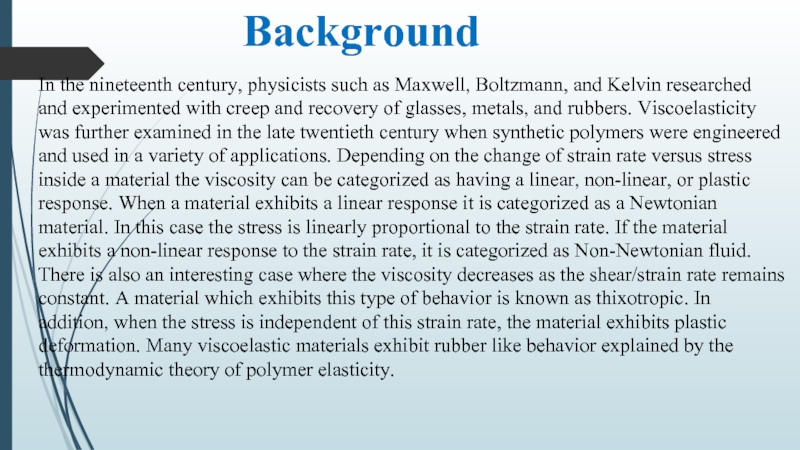 In the nineteenth century, physicists such as Maxwell, Boltzmann, and Kelvin researched and experimented with creep and recovery of glasses, metals, and rubbers. Viscoelasticity was further examined in the late twentieth century when synthetic polymers were engineered and used in a variety of applications. Depending on the change of strain rate versus stress inside a material the viscosity can be categorized as having a linear, non-linear, or plastic response. When a material exhibits a linear response it is categorized as a Newtonian material. In this case the stress is linearly proportional to the strain rate. If the material exhibits a non-linear response to the strain rate, it is categorized as Non-Newtonian fluid. There is also an interesting case where the viscosity decreases as the shear/strain rate remains constant. A material which exhibits this type of behavior is known as thixotropic. In addition, when the stress is independent of this strain rate, the material exhibits plastic deformation. Many viscoelastic materials exhibit rubber like behavior explained by the thermodynamic theory of polymer elasticity. 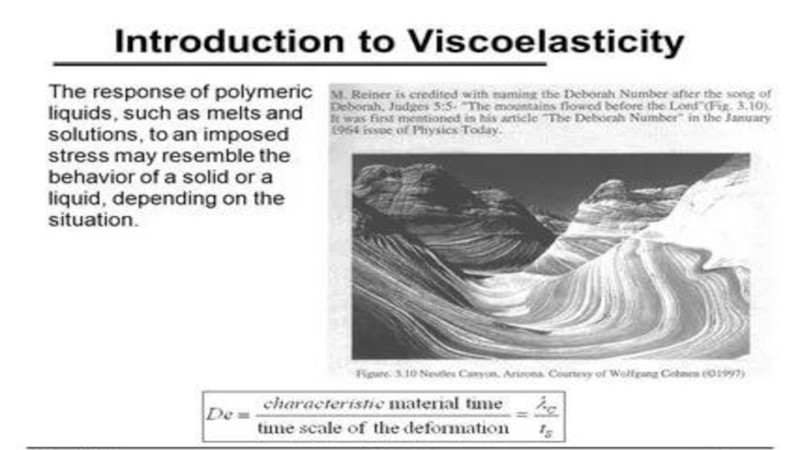 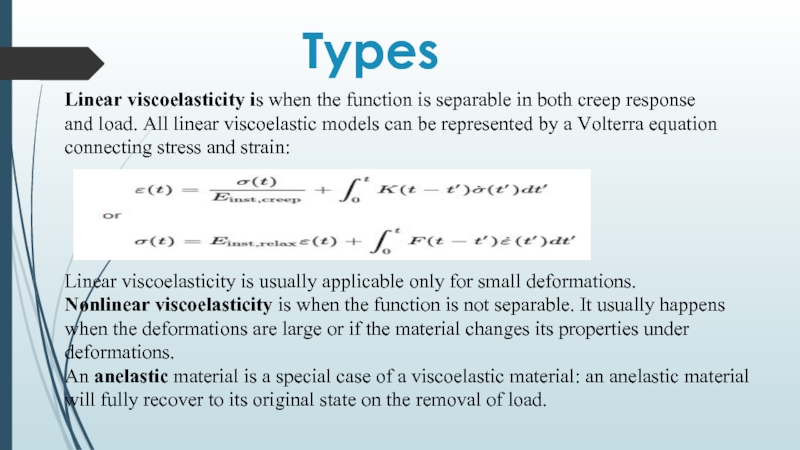 Linear viscoelasticity is when the function is separable in both creep response and load. All linear viscoelastic models can be represented by a Volterra equation connecting stress and strain: 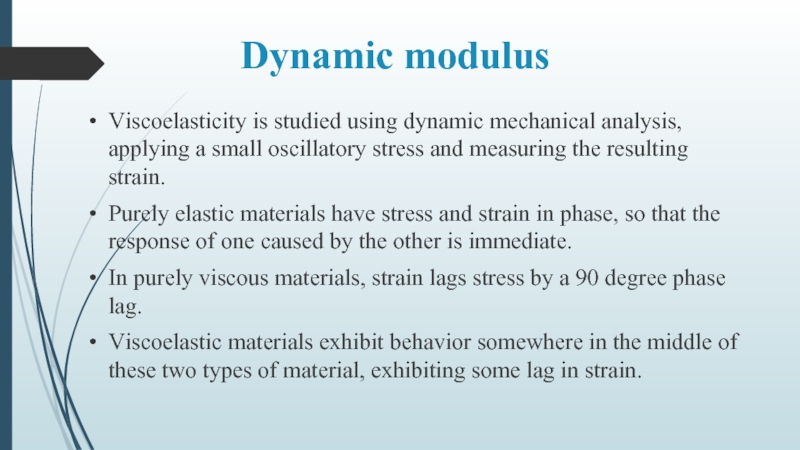 Viscoelasticity is studied using dynamic mechanical analysis, applying a small oscillatory stress and measuring the resulting strain.
Purely elastic materials have stress and strain in phase, so that the response of one caused by the other is immediate.
In purely viscous materials, strain lags stress by a 90 degree phase lag.
Viscoelastic materials exhibit behavior somewhere in the middle of these two types of material, exhibiting some lag in strain. 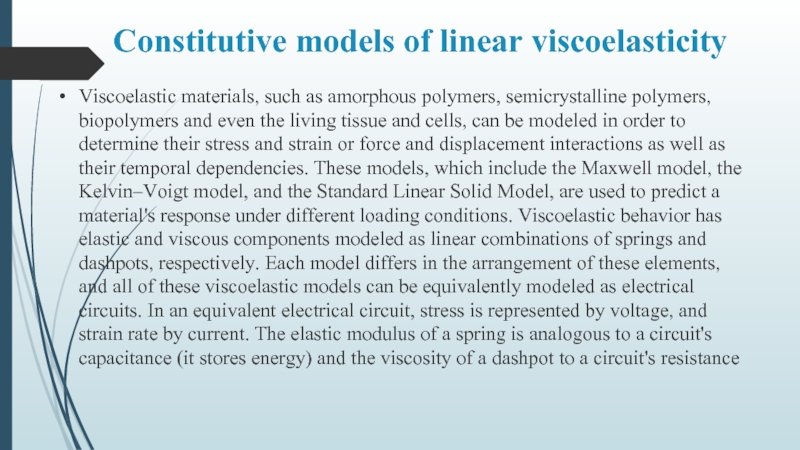 Viscoelastic materials, such as amorphous polymers, semicrystalline polymers, biopolymers and even the living tissue and cells, can be modeled in order to determine their stress and strain or force and displacement interactions as well as their temporal dependencies. These models, which include the Maxwell model, the Kelvin–Voigt model, and the Standard Linear Solid Model, are used to predict a material's response under different loading conditions. Viscoelastic behavior has elastic and viscous components modeled as linear combinations of springs and dashpots, respectively. Each model differs in the arrangement of these elements, and all of these viscoelastic models can be equivalently modeled as electrical circuits. In an equivalent electrical circuit, stress is represented by voltage, and strain rate by current. The elastic modulus of a spring is analogous to a circuit's capacitance (it stores energy) and the viscosity of a dashpot to a circuit's resistance 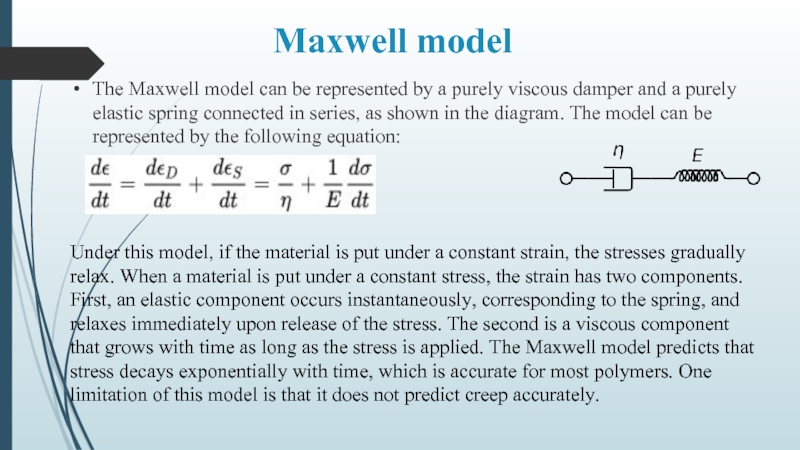 Under this model, if the material is put under a constant strain, the stresses gradually relax. When a material is put under a constant stress, the strain has two components. First, an elastic component occurs instantaneously, corresponding to the spring, and relaxes immediately upon release of the stress. The second is a viscous component that grows with time as long as the stress is applied. The Maxwell model predicts that stress decays exponentially with time, which is accurate for most polymers. One limitation of this model is that it does not predict creep accurately. 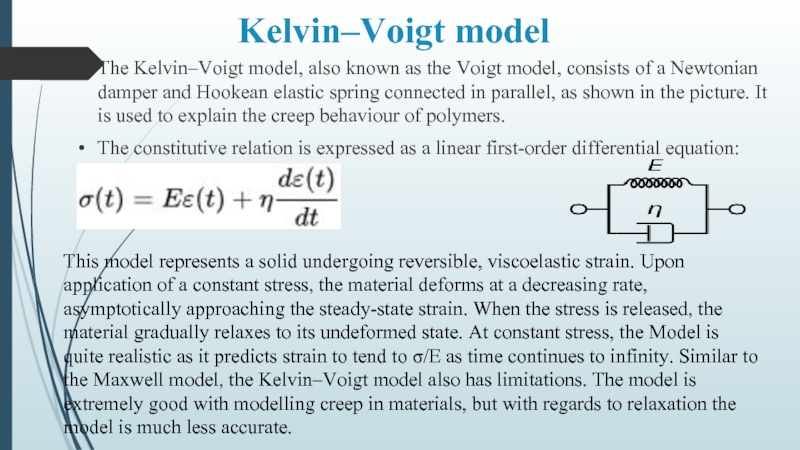 The Kelvin–Voigt model, also known as the Voigt model, consists of a Newtonian damper and Hookean elastic spring connected in parallel, as shown in the picture. It is used to explain the creep behaviour of polymers.
The constitutive relation is expressed as a linear first-order differential equation:

This model represents a solid undergoing reversible, viscoelastic strain. Upon application of a constant stress, the material deforms at a decreasing rate, asymptotically approaching the steady-state strain. When the stress is released, the material gradually relaxes to its undeformed state. At constant stress, the Model is quite realistic as it predicts strain to tend to σ/E as time continues to infinity. Similar to the Maxwell model, the Kelvin–Voigt model also has limitations. The model is extremely good with modelling creep in materials, but with regards to relaxation the model is much less accurate. 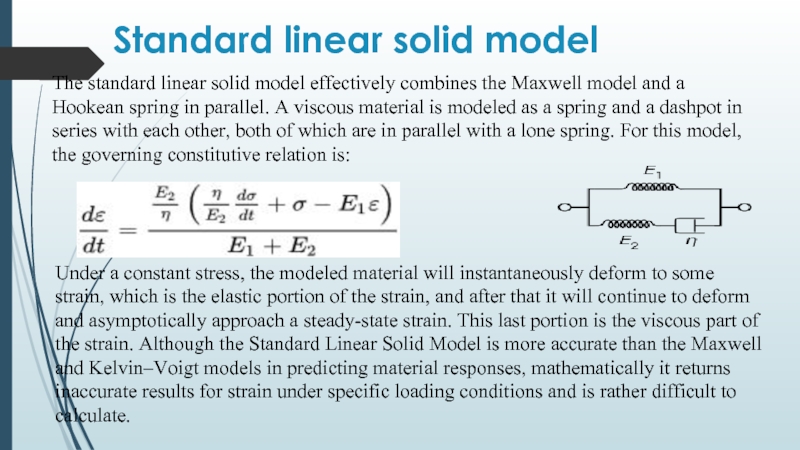 The standard linear solid model effectively combines the Maxwell model and a Hookean spring in parallel. A viscous material is modeled as a spring and a dashpot in series with each other, both of which are in parallel with a lone spring. For this model, the governing constitutive relation is:

Under a constant stress, the modeled material will instantaneously deform to some strain, which is the elastic portion of the strain, and after that it will continue to deform and asymptotically approach a steady-state strain. This last portion is the viscous part of the strain. Although the Standard Linear Solid Model is more accurate than the Maxwell and Kelvin–Voigt models in predicting material responses, mathematically it returns inaccurate results for strain under specific loading conditions and is rather difficult to calculate. 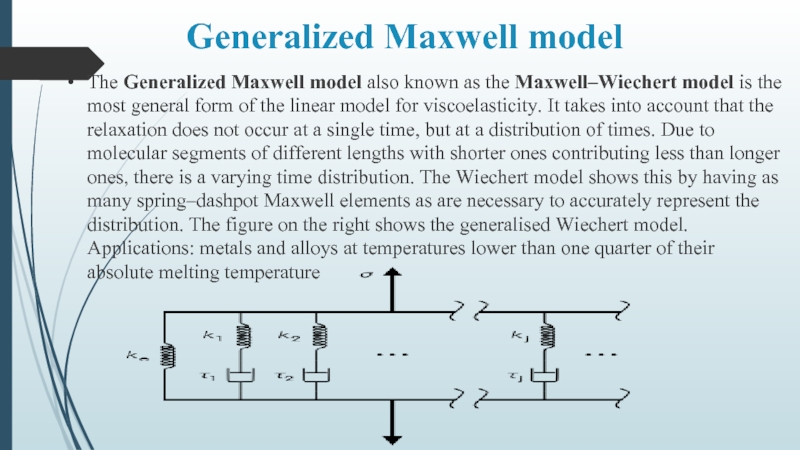 The Generalized Maxwell model also known as the Maxwell–Wiechert model is the most general form of the linear model for viscoelasticity. It takes into account that the relaxation does not occur at a single time, but at a distribution of times. Due to molecular segments of different lengths with shorter ones contributing less than longer ones, there is a varying time distribution. The Wiechert model shows this by having as many spring–dashpot Maxwell elements as are necessary to accurately represent the distribution. The figure on the right shows the generalised Wiechert model. Applications: metals and alloys at temperatures lower than one quarter of their absolute melting temperature 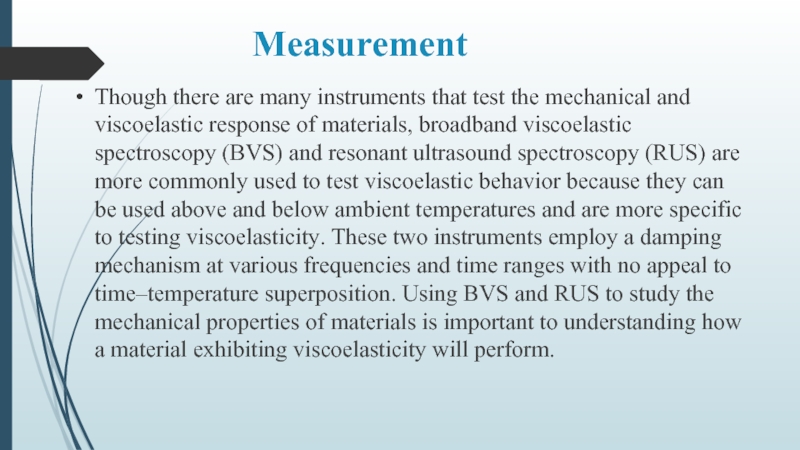 Though there are many instruments that test the mechanical and viscoelastic response of materials, broadband viscoelastic spectroscopy (BVS) and resonant ultrasound spectroscopy (RUS) are more commonly used to test viscoelastic behavior because they can be used above and below ambient temperatures and are more specific to testing viscoelasticity. These two instruments employ a damping mechanism at various frequencies and time ranges with no appeal to time–temperature superposition. Using BVS and RUS to study the mechanical properties of materials is important to understanding how a material exhibiting viscoelasticity will perform. 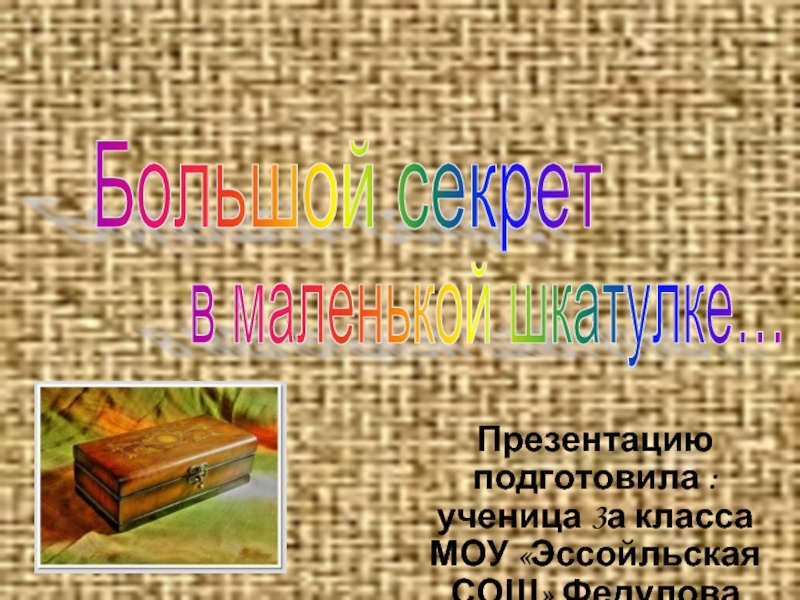 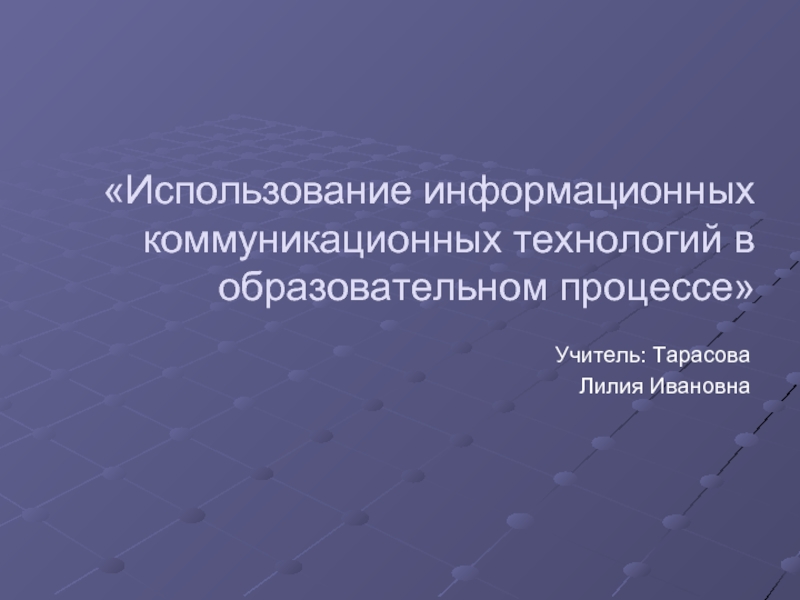 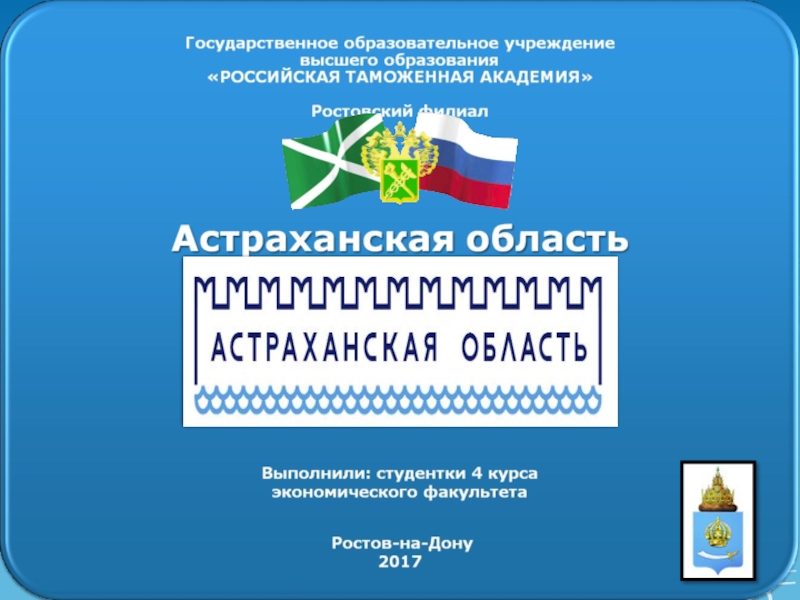 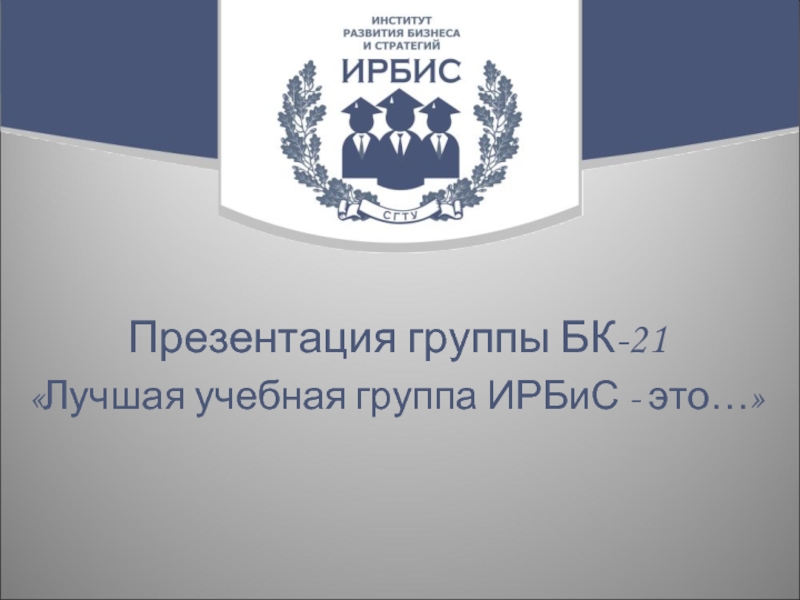 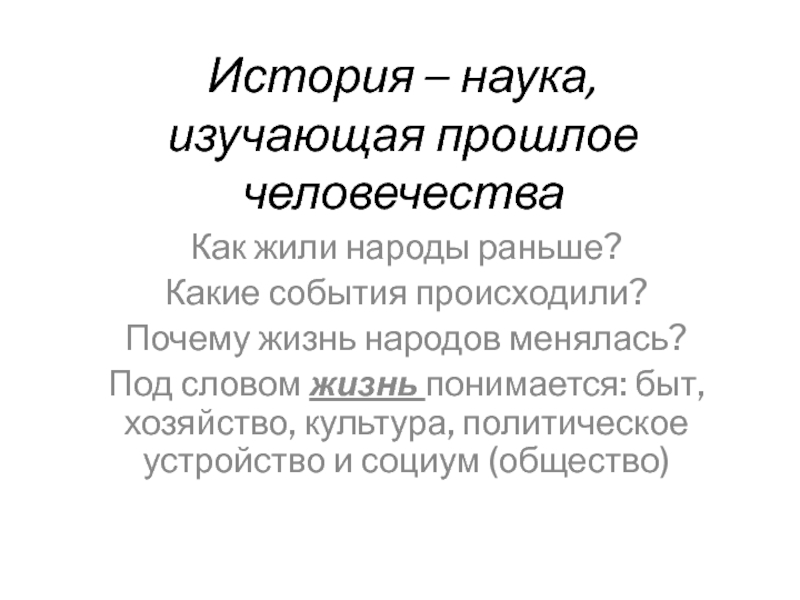 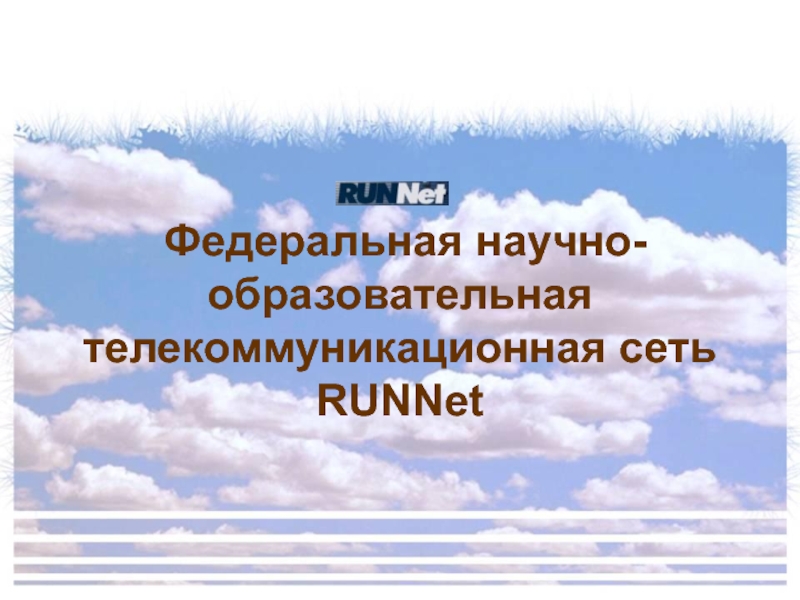