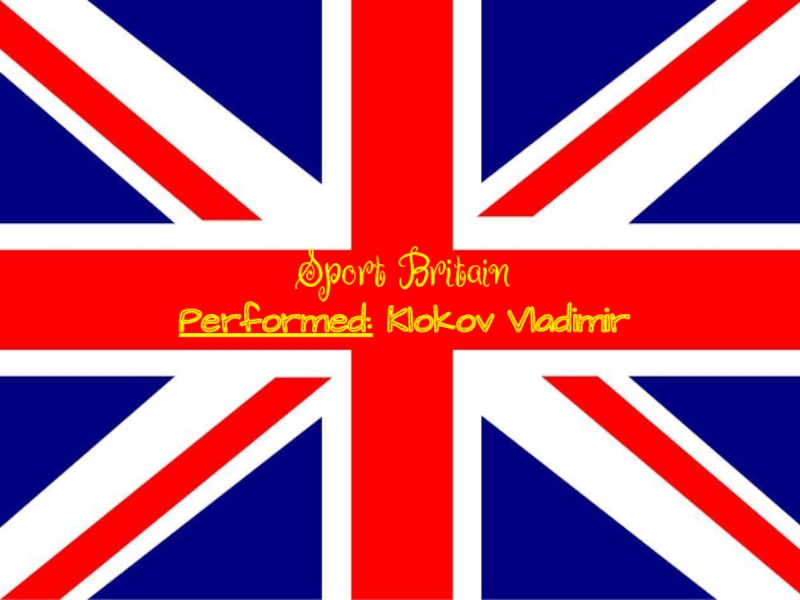 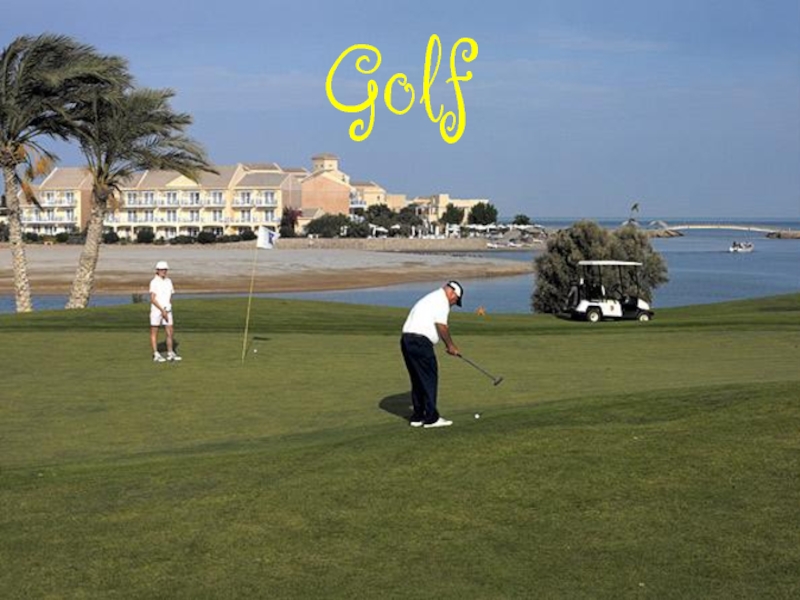 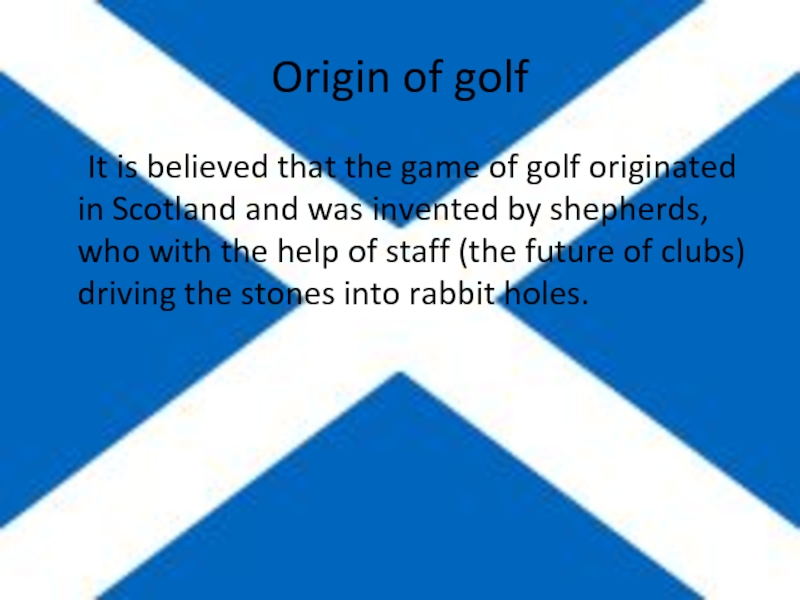 It is believed that the game of golf originated in Scotland and was invented by shepherds, who with the help of staff (the future of clubs) driving the stones into rabbit holes. 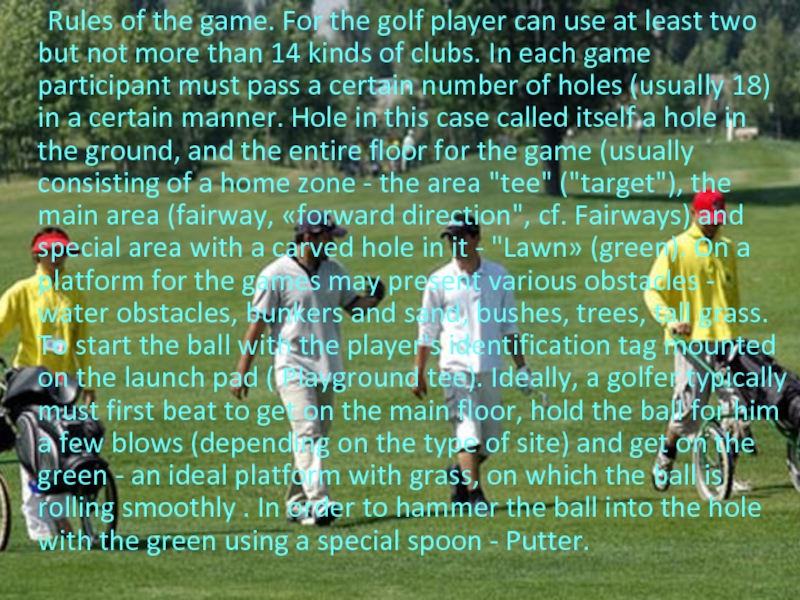 Rules of the game. For the golf player can use at least two but not more than 14 kinds of clubs. In each game participant must pass a certain number of holes (usually 18) in a certain manner. Hole in this case called itself a hole in the ground, and the entire floor for the game (usually consisting of a home zone - the area "tee" ("target"), the main area (fairway, «forward direction", cf. Fairways) and special area with a carved hole in it - "Lawn» (green). On a platform for the games may present various obstacles - water obstacles, bunkers and sand, bushes, trees, tall grass. To start the ball with the player's identification tag mounted on the launch pad ( Playground tee). Ideally, a golfer typically must first beat to get on the main floor, hold the ball for him a few blows (depending on the type of site) and get on the green - an ideal platform with grass, on which the ball is rolling smoothly . In order to hammer the ball into the hole with the green using a special spoon - Putter. 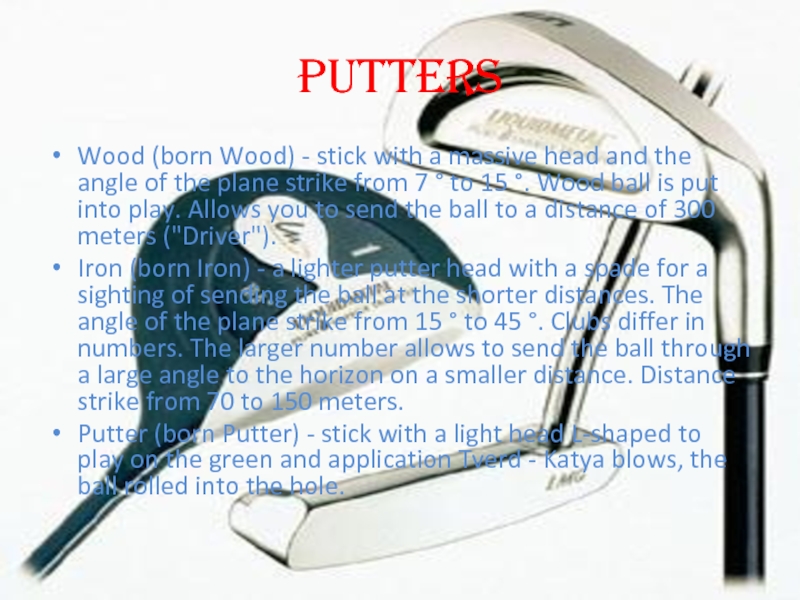 Wood (born Wood) - stick with a massive head and the angle of the plane strike from 7 ° to 15 °. Wood ball is put into play. Allows you to send the ball to a distance of 300 meters ("Driver").
Iron (born Iron) - a lighter putter head with a spade for a sighting of sending the ball at the shorter distances. The angle of the plane strike from 15 ° to 45 °. Clubs differ in numbers. The larger number allows to send the ball through a large angle to the horizon on a smaller distance. Distance strike from 70 to 150 meters.
Putter (born Putter) - stick with a light head L-shaped to play on the green and application Tverd - Katya blows, the ball rolled into the hole. 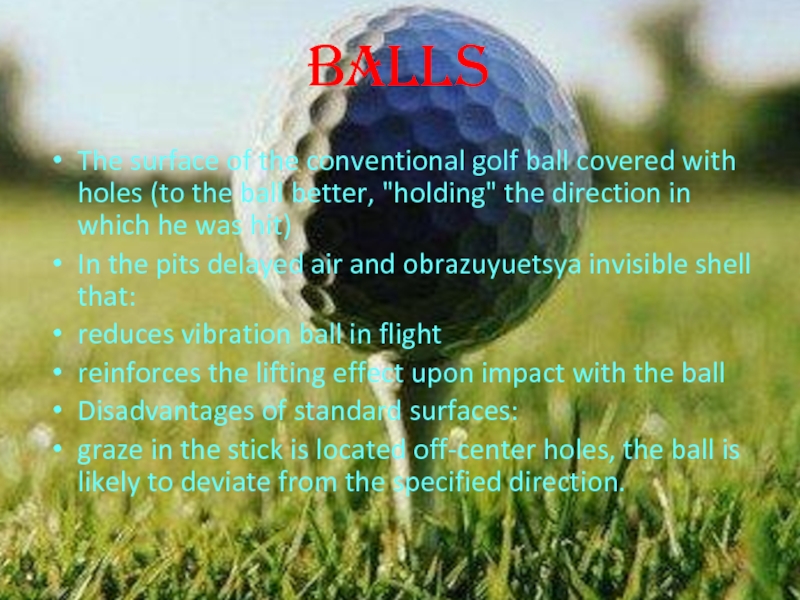 The surface of the conventional golf ball covered with holes (to the ball better, "holding" the direction in which he was hit)
In the pits delayed air and obrazuyuetsya invisible shell that:
reduces vibration ball in flight
reinforces the lifting effect upon impact with the ball
Disadvantages of standard surfaces:
graze in the stick is located off-center holes, the ball is likely to deviate from the specified direction. 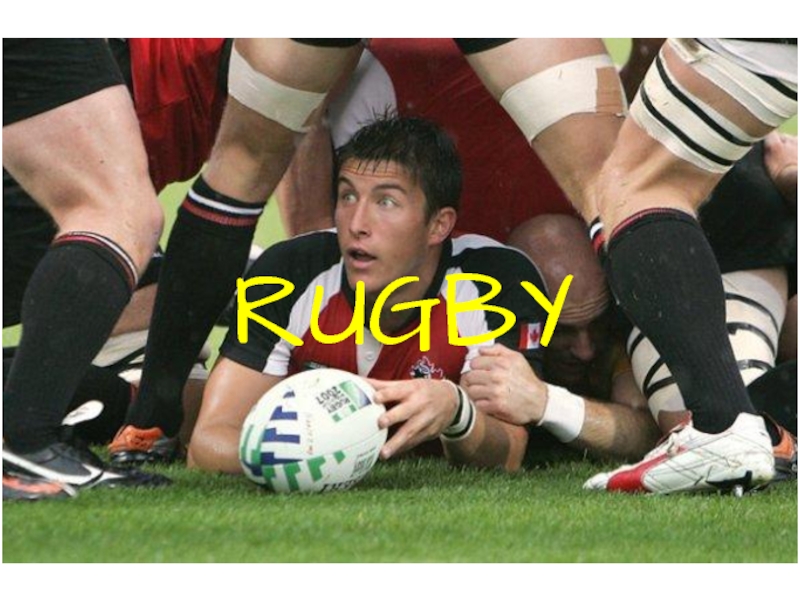 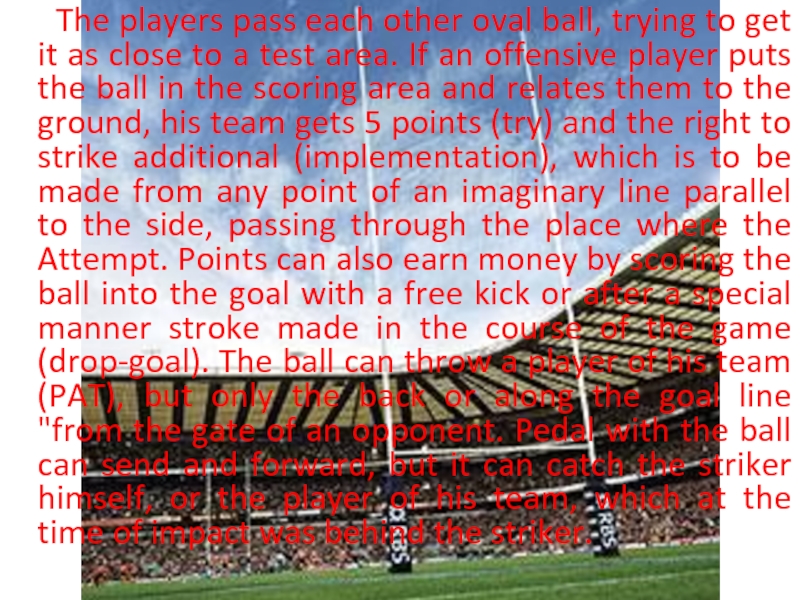 The players pass each other oval ball, trying to get it as close to a test area. If an offensive player puts the ball in the scoring area and relates them to the ground, his team gets 5 points (try) and the right to strike additional (implementation), which is to be made from any point of an imaginary line parallel to the side, passing through the place where the Attempt. Points can also earn money by scoring the ball into the goal with a free kick or after a special manner stroke made in the course of the game (drop-goal). The ball can throw a player of his team (PAT), but only the back or along the goal line "from the gate of an opponent. Pedal with the ball can send and forward, but it can catch the striker himself, or the player of his team, which at the time of impact was behind the striker. 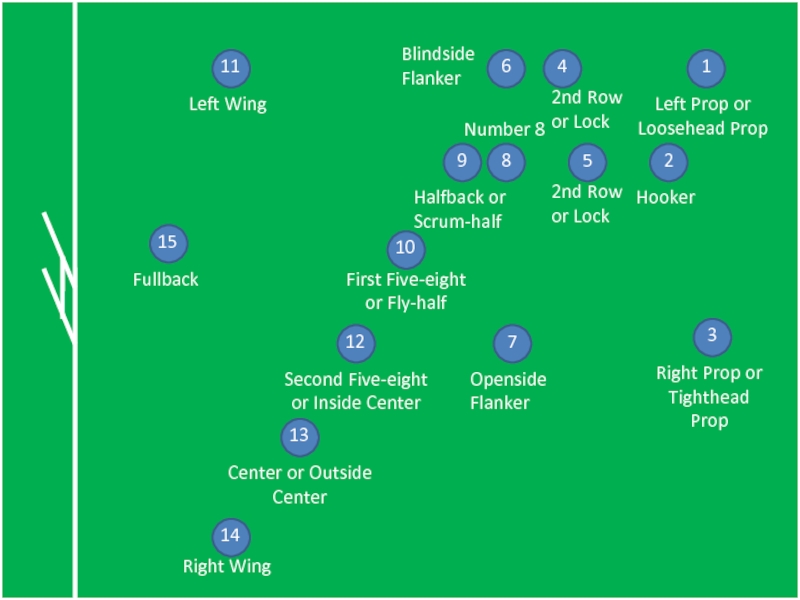 Center or Outside Center

Second Five-eight or Inside Center 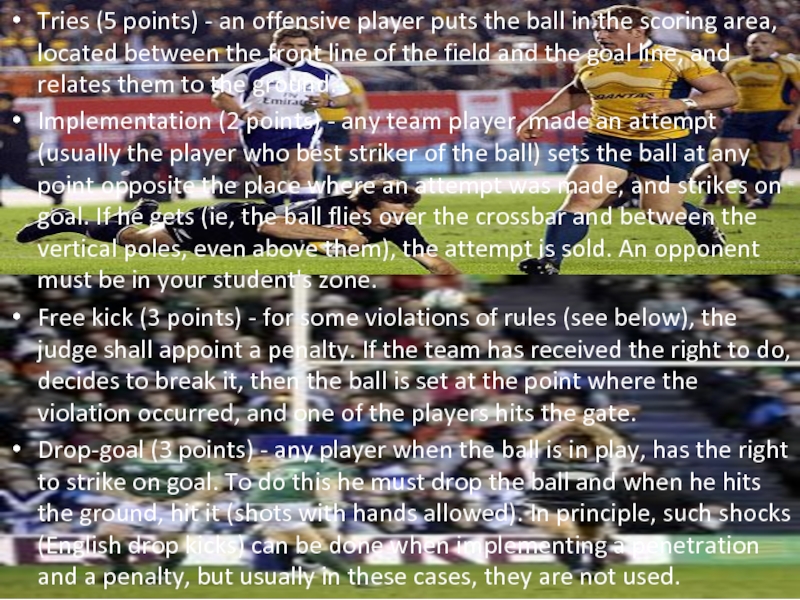 Tries (5 points) - an offensive player puts the ball in the scoring area, located between the front line of the field and the goal line, and relates them to the ground.
Implementation (2 points) - any team player, made an attempt (usually the player who best striker of the ball) sets the ball at any point opposite the place where an attempt was made, and strikes on goal. If he gets (ie, the ball flies over the crossbar and between the vertical poles, even above them), the attempt is sold. An opponent must be in your student's zone.
Free kick (3 points) - for some violations of rules (see below), the judge shall appoint a penalty. If the team has received the right to do, decides to break it, then the ball is set at the point where the violation occurred, and one of the players hits the gate.
Drop-goal (3 points) - any player when the ball is in play, has the right to strike on goal. To do this he must drop the ball and when he hits the ground, hit it (shots with hands allowed). In principle, such shocks (English drop kicks) can be done when implementing a penetration and a penalty, but usually in these cases, they are not used. 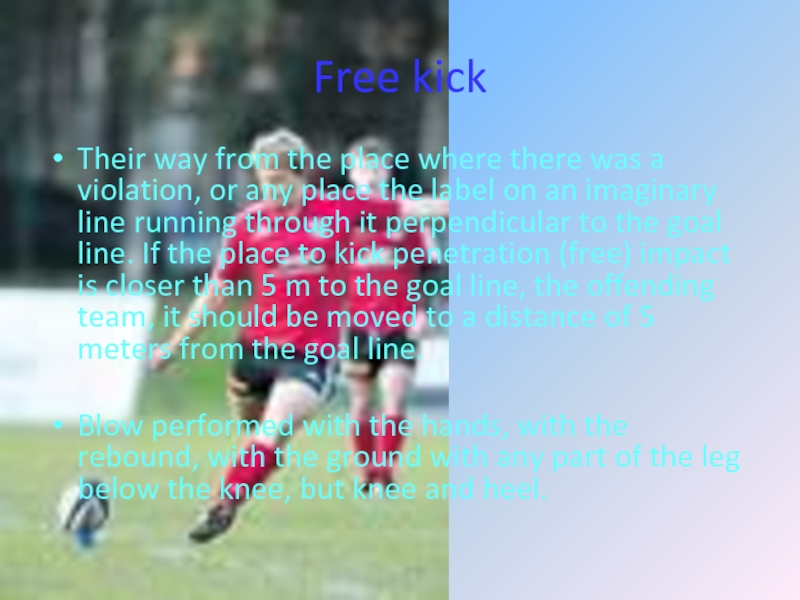 Their way from the place where there was a violation, or any place the label on an imaginary line running through it perpendicular to the goal line. If the place to kick penetration (free) impact is closer than 5 m to the goal line, the offending team, it should be moved to a distance of 5 meters from the goal line.

Blow performed with the hands, with the rebound, with the ground with any part of the leg below the knee, but knee and heel. 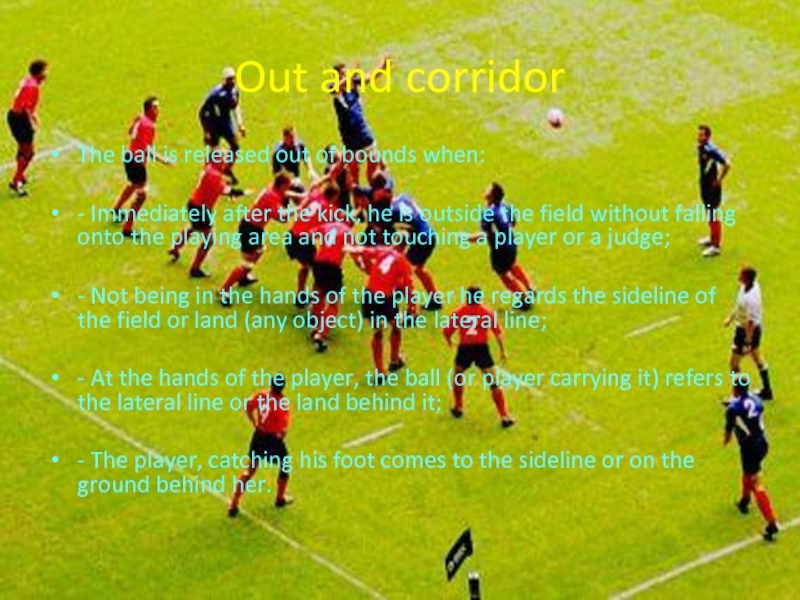 The ball is released out of bounds when:

- Immediately after the kick, he is outside the field without falling onto the playing area and not touching a player or a judge;

- Not being in the hands of the player he regards the sideline of the field or land (any object) in the lateral line;

- At the hands of the player, the ball (or player carrying it) refers to the lateral line or the land behind it;

- The player, catching his foot comes to the sideline or on the ground behind her. 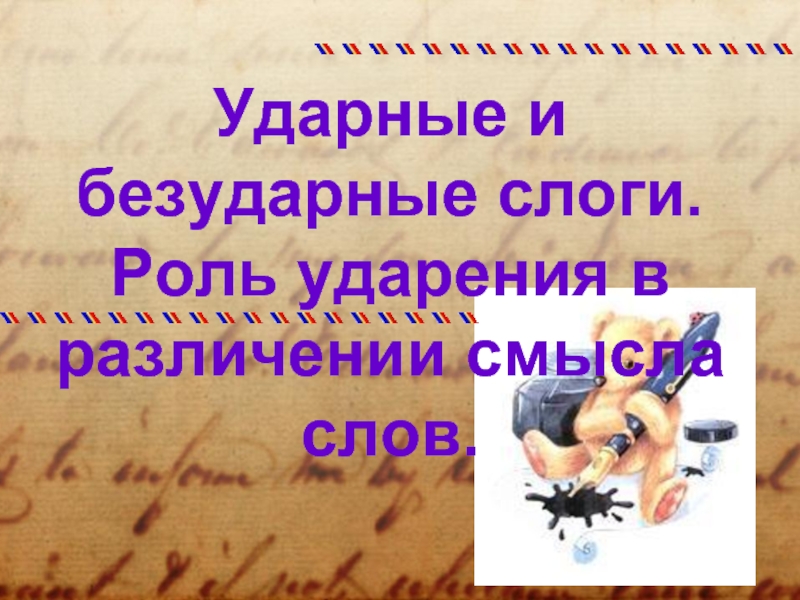 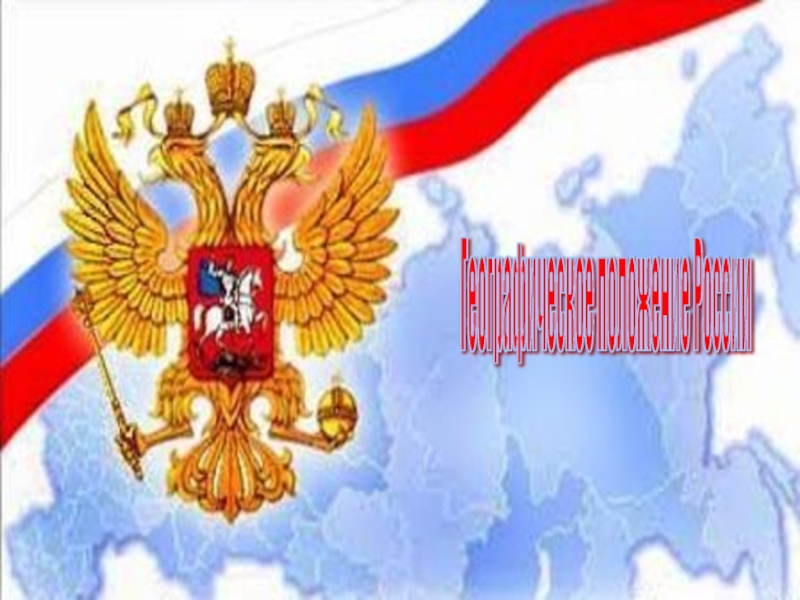 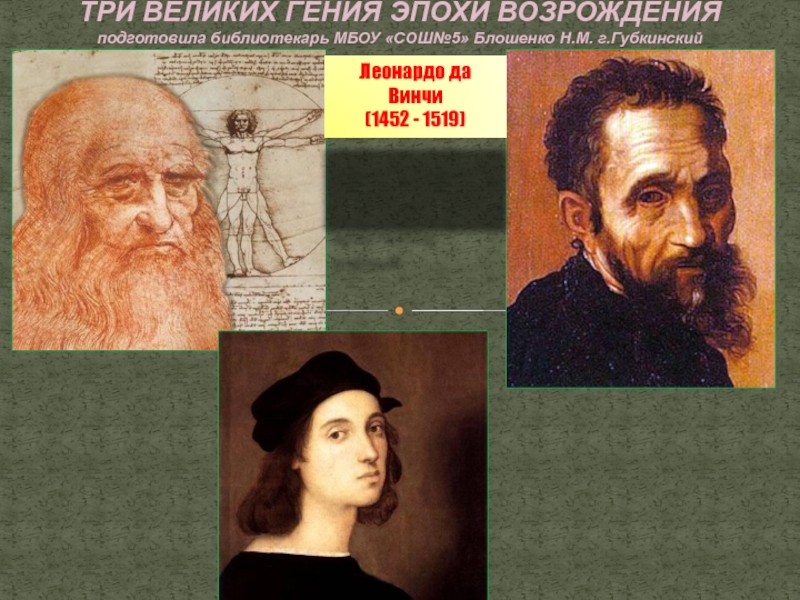 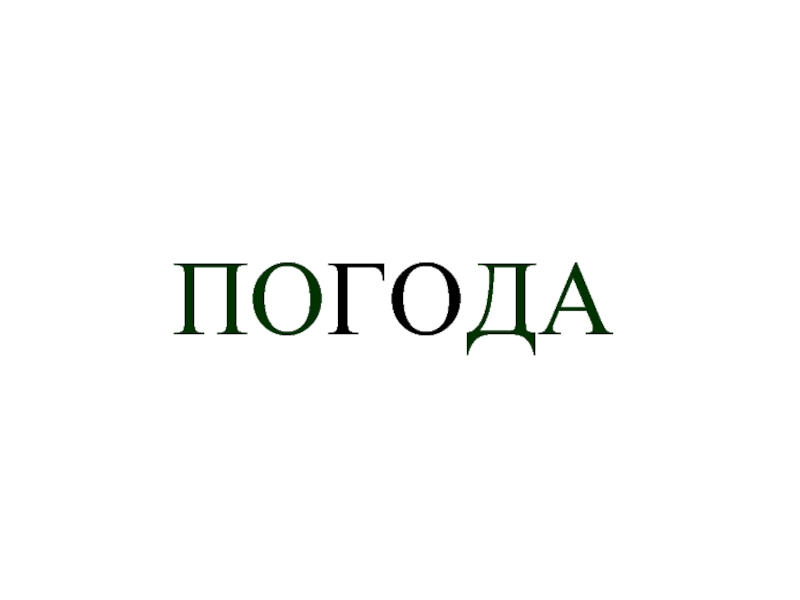 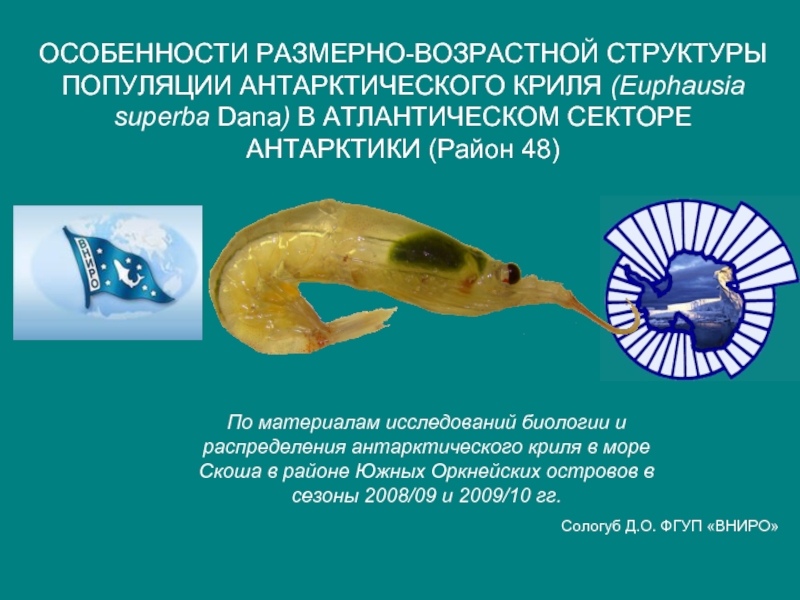 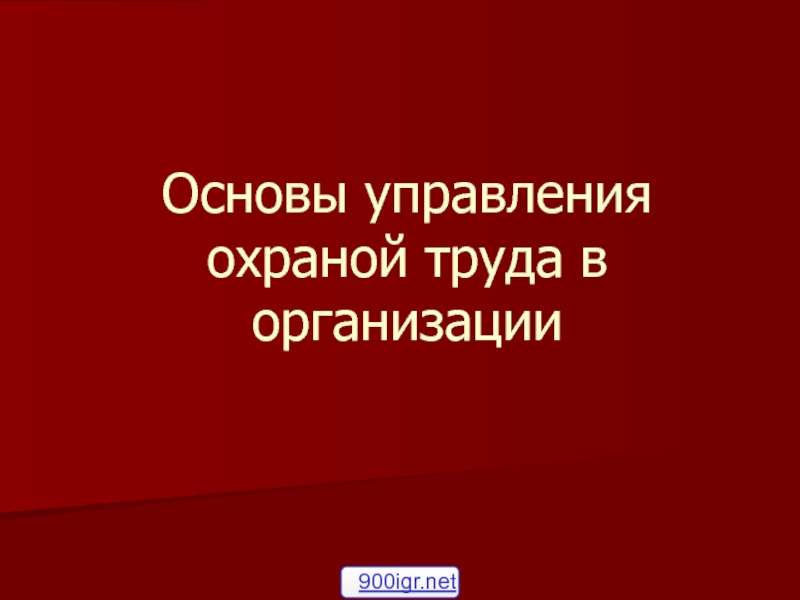