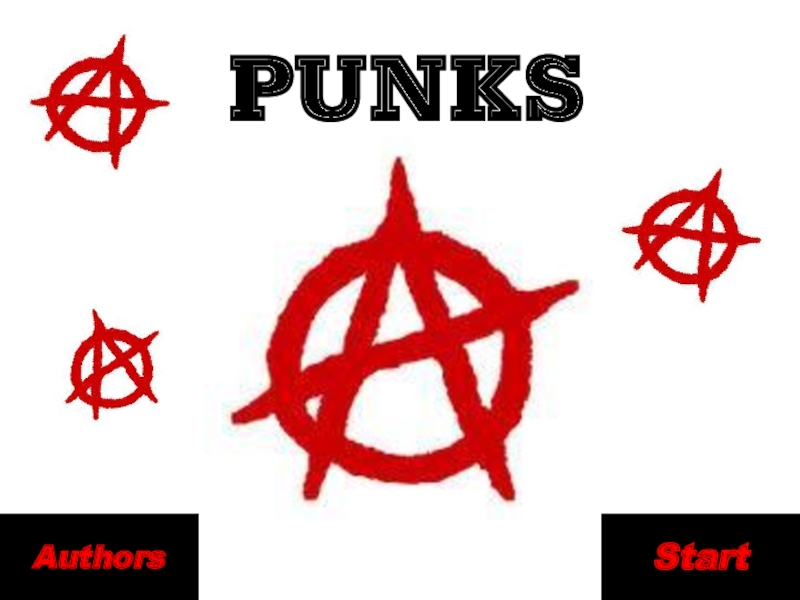 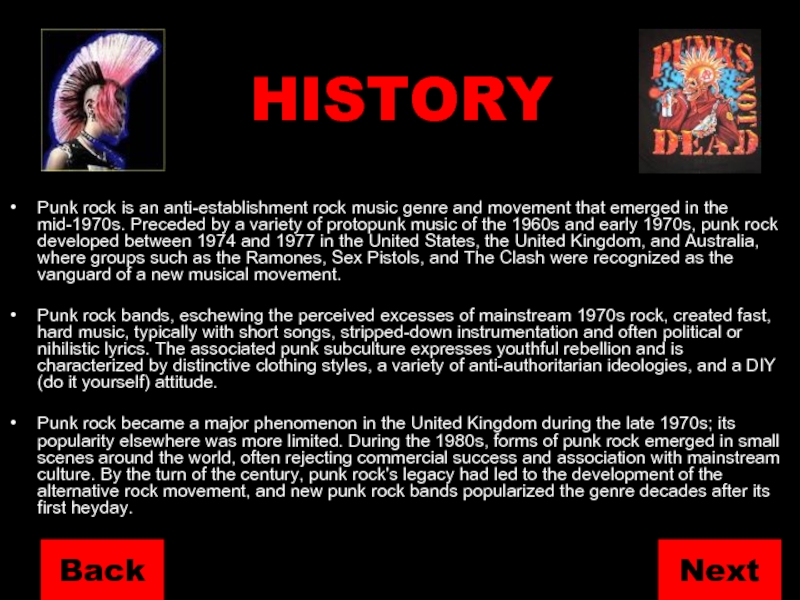 Punk rock is an anti-establishment rock music genre and movement that emerged in the mid-1970s. Preceded by a variety of protopunk music of the 1960s and early 1970s, punk rock developed between 1974 and 1977 in the United States, the United Kingdom, and Australia, where groups such as the Ramones, Sex Pistols, and The Clash were recognized as the vanguard of a new musical movement.

Punk rock bands, eschewing the perceived excesses of mainstream 1970s rock, created fast, hard music, typically with short songs, stripped-down instrumentation and often political or nihilistic lyrics. The associated punk subculture expresses youthful rebellion and is characterized by distinctive clothing styles, a variety of anti-authoritarian ideologies, and a DIY (do it yourself) attitude.

Punk rock became a major phenomenon in the United Kingdom during the late 1970s; its popularity elsewhere was more limited. During the 1980s, forms of punk rock emerged in small scenes around the world, often rejecting commercial success and association with mainstream culture. By the turn of the century, punk rock's legacy had led to the development of the alternative rock movement, and new punk rock bands popularized the genre decades after its first heyday. 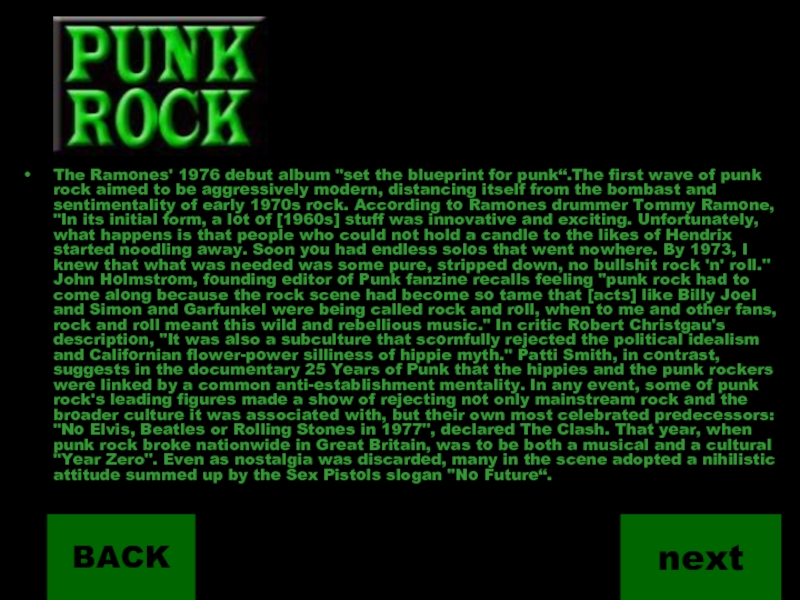 The Ramones' 1976 debut album "set the blueprint for punk“.The first wave of punk rock aimed to be aggressively modern, distancing itself from the bombast and sentimentality of early 1970s rock. According to Ramones drummer Tommy Ramone, "In its initial form, a lot of [1960s] stuff was innovative and exciting. Unfortunately, what happens is that people who could not hold a candle to the likes of Hendrix started noodling away. Soon you had endless solos that went nowhere. By 1973, I knew that what was needed was some pure, stripped down, no bullshit rock 'n' roll." John Holmstrom, founding editor of Punk fanzine recalls feeling "punk rock had to come along because the rock scene had become so tame that [acts] like Billy Joel and Simon and Garfunkel were being called rock and roll, when to me and other fans, rock and roll meant this wild and rebellious music." In critic Robert Christgau's description, "It was also a subculture that scornfully rejected the political idealism and Californian flower-power silliness of hippie myth." Patti Smith, in contrast, suggests in the documentary 25 Years of Punk that the hippies and the punk rockers were linked by a common anti-establishment mentality. In any event, some of punk rock's leading figures made a show of rejecting not only mainstream rock and the broader culture it was associated with, but their own most celebrated predecessors: "No Elvis, Beatles or Rolling Stones in 1977", declared The Clash. That year, when punk rock broke nationwide in Great Britain, was to be both a musical and a cultural "Year Zero". Even as nostalgia was discarded, many in the scene adopted a nihilistic attitude summed up by the Sex Pistols slogan "No Future“. 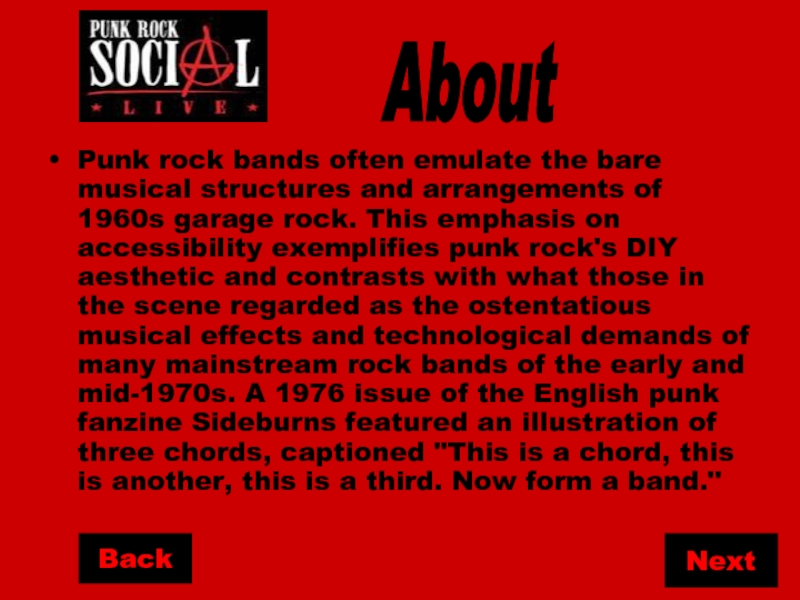 Punk rock bands often emulate the bare musical structures and arrangements of 1960s garage rock. This emphasis on accessibility exemplifies punk rock's DIY aesthetic and contrasts with what those in the scene regarded as the ostentatious musical effects and technological demands of many mainstream rock bands of the early and mid-1970s. A 1976 issue of the English punk fanzine Sideburns featured an illustration of three chords, captioned "This is a chord, this is another, this is a third. Now form a band." 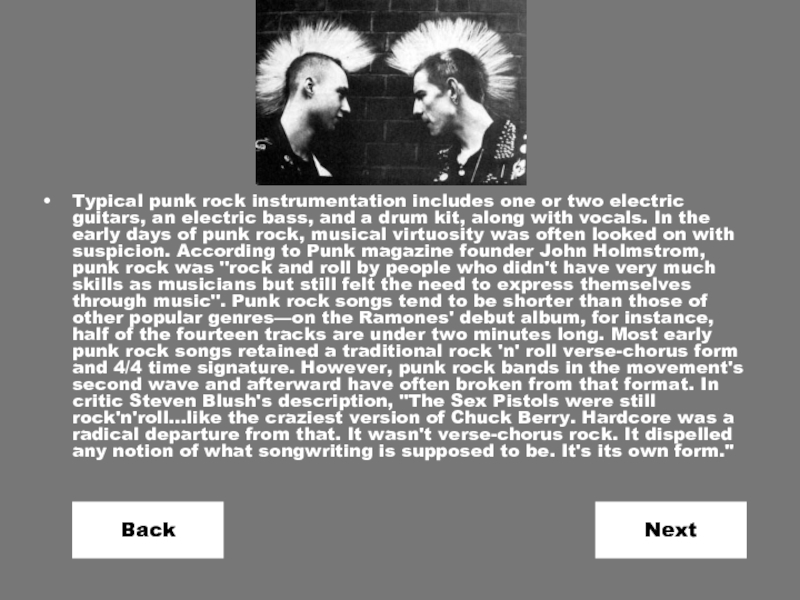 Typical punk rock instrumentation includes one or two electric guitars, an electric bass, and a drum kit, along with vocals. In the early days of punk rock, musical virtuosity was often looked on with suspicion. According to Punk magazine founder John Holmstrom, punk rock was "rock and roll by people who didn't have very much skills as musicians but still felt the need to express themselves through music". Punk rock songs tend to be shorter than those of other popular genres—on the Ramones' debut album, for instance, half of the fourteen tracks are under two minutes long. Most early punk rock songs retained a traditional rock 'n' roll verse-chorus form and 4/4 time signature. However, punk rock bands in the movement's second wave and afterward have often broken from that format. In critic Steven Blush's description, "The Sex Pistols were still rock'n'roll...like the craziest version of Chuck Berry. Hardcore was a radical departure from that. It wasn't verse-chorus rock. It dispelled any notion of what songwriting is supposed to be. It's its own form." 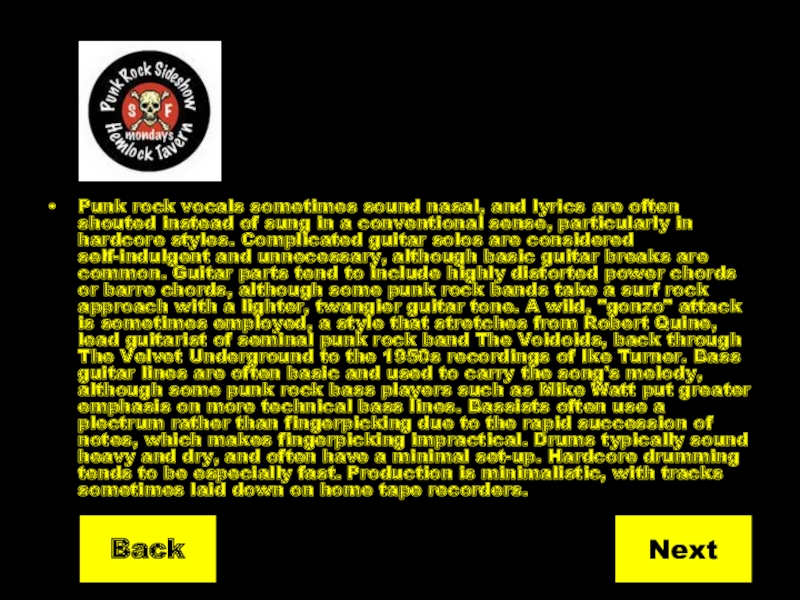 Punk rock vocals sometimes sound nasal, and lyrics are often shouted instead of sung in a conventional sense, particularly in hardcore styles. Complicated guitar solos are considered self-indulgent and unnecessary, although basic guitar breaks are common. Guitar parts tend to include highly distorted power chords or barre chords, although some punk rock bands take a surf rock approach with a lighter, twangier guitar tone. A wild, "gonzo" attack is sometimes employed, a style that stretches from Robert Quine, lead guitarist of seminal punk rock band The Voidoids, back through The Velvet Underground to the 1950s recordings of Ike Turner. Bass guitar lines are often basic and used to carry the song's melody, although some punk rock bass players such as Mike Watt put greater emphasis on more technical bass lines. Bassists often use a plectrum rather than fingerpicking due to the rapid succession of notes, which makes fingerpicking impractical. Drums typically sound heavy and dry, and often have a minimal set-up. Hardcore drumming tends to be especially fast. Production is minimalistic, with tracks sometimes laid down on home tape recorders. 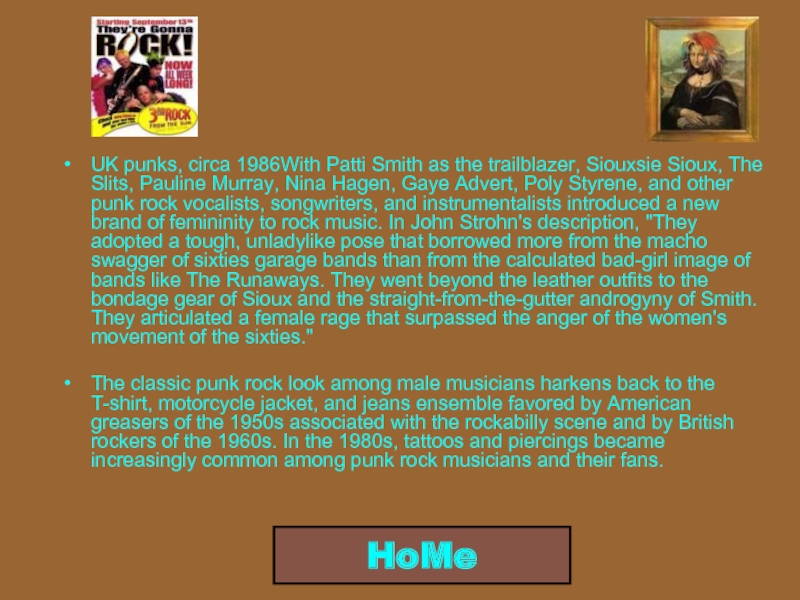 UK punks, circa 1986With Patti Smith as the trailblazer, Siouxsie Sioux, The Slits, Pauline Murray, Nina Hagen, Gaye Advert, Poly Styrene, and other punk rock vocalists, songwriters, and instrumentalists introduced a new brand of femininity to rock music. In John Strohn's description, "They adopted a tough, unladylike pose that borrowed more from the macho swagger of sixties garage bands than from the calculated bad-girl image of bands like The Runaways. They went beyond the leather outfits to the bondage gear of Sioux and the straight-from-the-gutter androgyny of Smith. They articulated a female rage that surpassed the anger of the women's movement of the sixties."

The classic punk rock look among male musicians harkens back to the T-shirt, motorcycle jacket, and jeans ensemble favored by American greasers of the 1950s associated with the rockabilly scene and by British rockers of the 1960s. In the 1980s, tattoos and piercings became increasingly common among punk rock musicians and their fans. 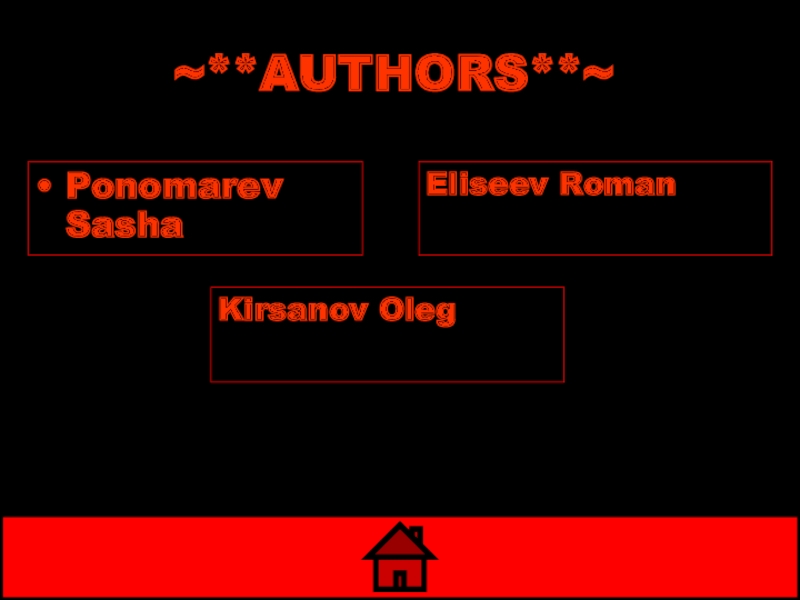 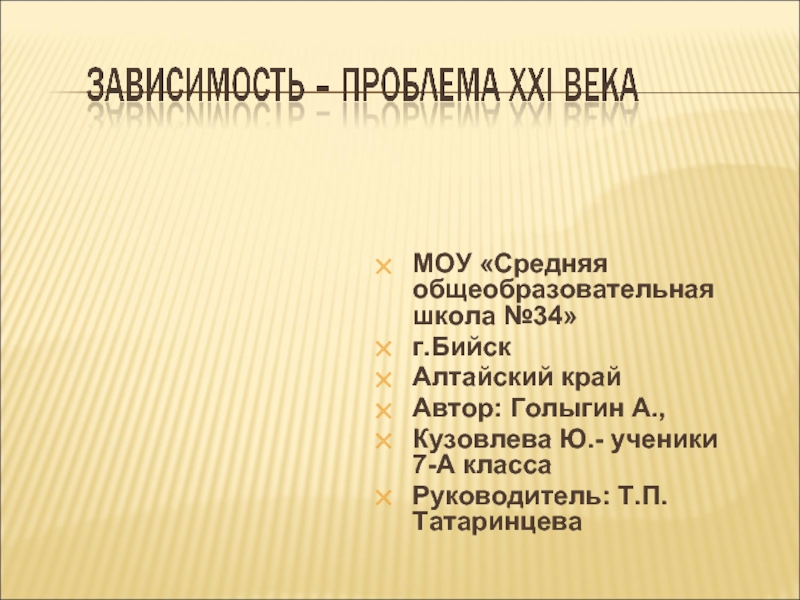 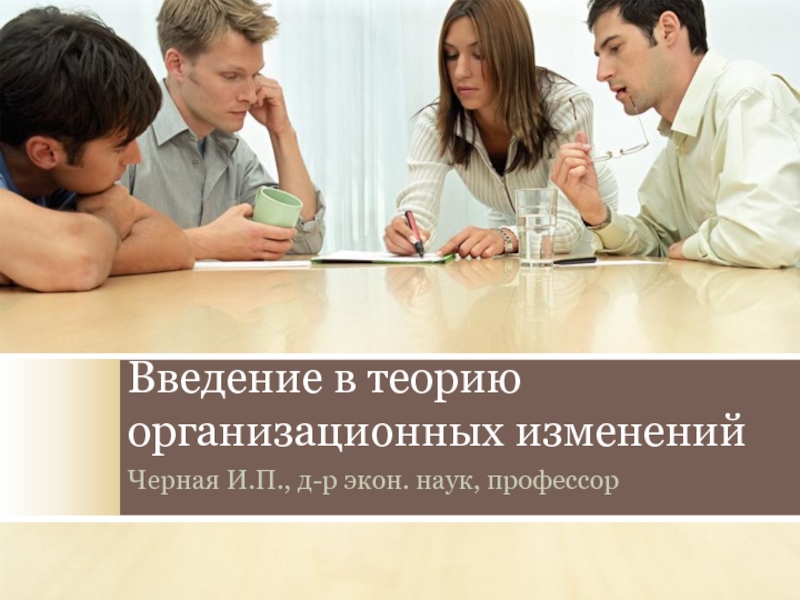 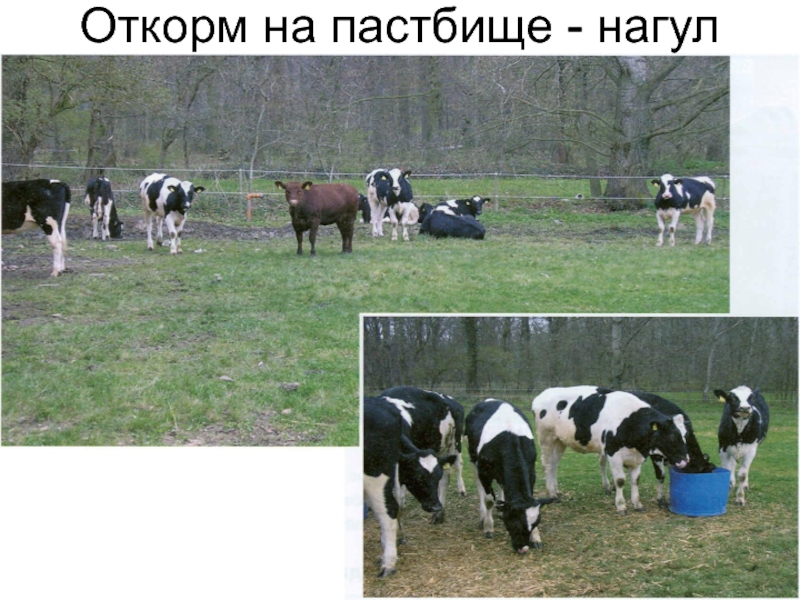 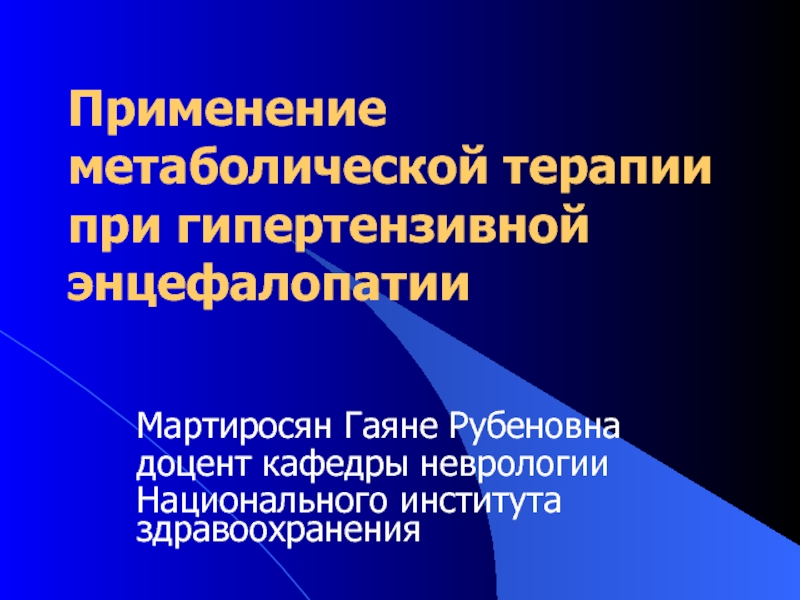 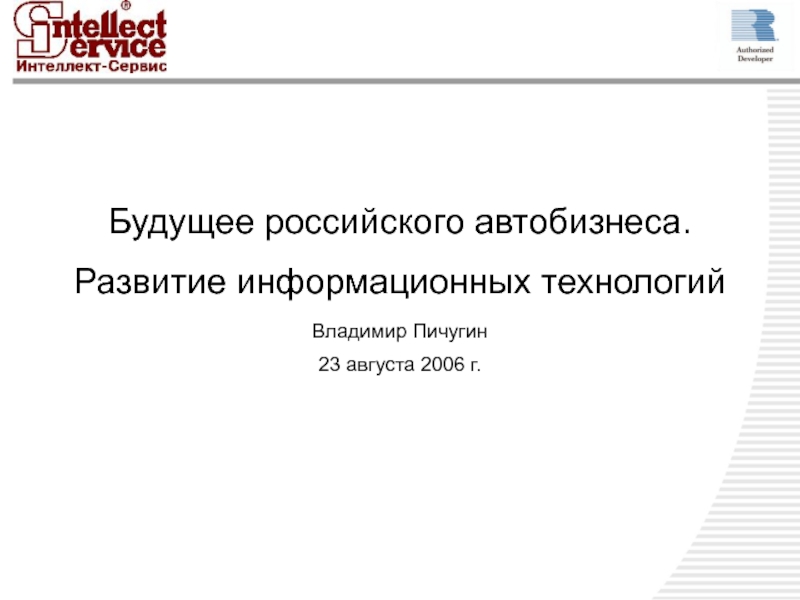