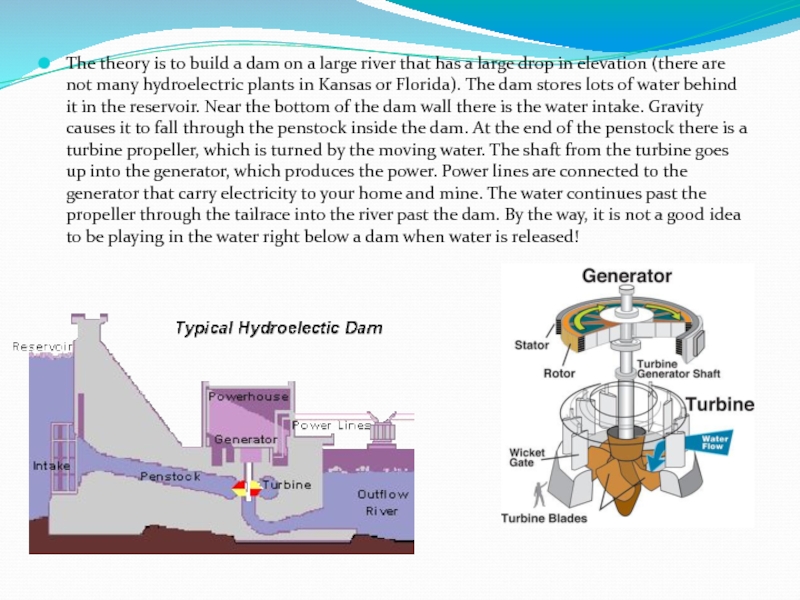 The theory is to build a dam on a large river that has a large drop in elevation (there are not many hydroelectric plants in Kansas or Florida). The dam stores lots of water behind it in the reservoir. Near the bottom of the dam wall there is the water intake. Gravity causes it to fall through the penstock inside the dam. At the end of the penstock there is a turbine propeller, which is turned by the moving water. The shaft from the turbine goes up into the generator, which produces the power. Power lines are connected to the generator that carry electricity to your home and mine. The water continues past the propeller through the tailrace into the river past the dam. By the way, it is not a good idea to be playing in the water right below a dam when water is released! 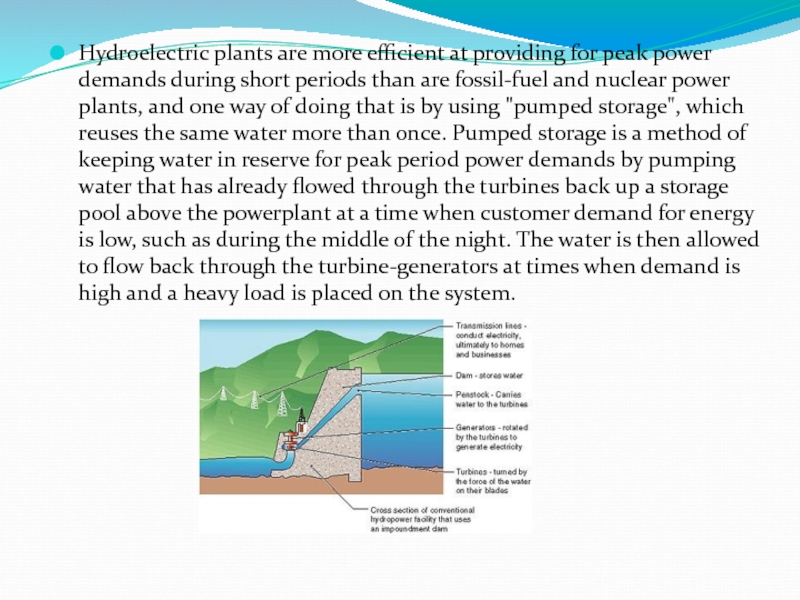 Hydroelectric plants are more efficient at providing for peak power demands during short periods than are fossil-fuel and nuclear power plants, and one way of doing that is by using "pumped storage", which reuses the same water more than once. Pumped storage is a method of keeping water in reserve for peak period power demands by pumping water that has already flowed through the turbines back up a storage pool above the powerplant at a time when customer demand for energy is low, such as during the middle of the night. The water is then allowed to flow back through the turbine-generators at times when demand is high and a heavy load is placed on the system.

The reservoir acts much like a battery, storing power in the form of water when demands are low and producing maximum power during daily and seasonal peak periods. An advantage of pumped storage is that hydroelectric generating units are able to start up quickly and make rapid adjustments in output. They operate efficiently when used for one hour or several hours. Because pumped storage reservoirs are relatively small, construction costs are generally low compared with conventional hydropower facilities.

Flexibility
Hydro is a flexible source of electricity since stations can be ramped up and down very quickly to adapt to changing energy demands. Hydro turbines have a start-up time of the order of a few minutes. It takes around 60 to 90 seconds to bring a unit from cold start-up to full load; this is much shorter than for gas turbines or steam plants. Power generation can also be decreased quickly when there is a surplus power generation. Hence the limited capacity of hydropower units is not generally used to produce base power except for vacating the flood pool or meeting downstream needs. Instead, it serves as backup for non-hydro generators.

The major advantage of hydroelectricity is elimination of the cost of fuel. The cost of operating a hydroelectric station is nearly immune to increases in the cost of fossil fuels such as oil, natural gas or coal, and no imports are needed. The average cost of electricity from a hydro station larger than 10 megawatts is 3 to 5 U.S. cents per kilowatt-hour.
Hydroelectric stations have long economic lives, with some plants still in service after 50–100 years. Operating labor cost is also usually low, as plants are automated and have few personnel on site during normal operation.
Where a dam serves multiple purposes, a hydroelectric station may be added with relatively low construction cost, providing a useful revenue stream to offset the costs of dam operation. It has been calculated that the sale of electricity from the Three Gorges Dam will cover the construction costs after 5 to 8 years of full generation. Additionally, some data shows that in most countries large hydropower dams will be too costly and take too long to build to deliver a positive risk adjusted return, unless appropriate risk management measures are put in place. 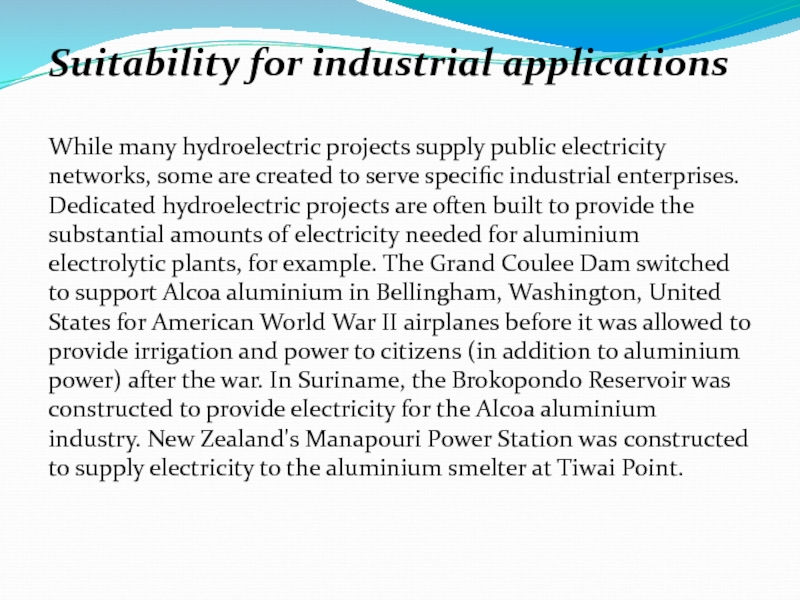 While many hydroelectric projects supply public electricity networks, some are created to serve specific industrial enterprises. Dedicated hydroelectric projects are often built to provide the substantial amounts of electricity needed for aluminium electrolytic plants, for example. The Grand Coulee Dam switched to support Alcoa aluminium in Bellingham, Washington, United States for American World War II airplanes before it was allowed to provide irrigation and power to citizens (in addition to aluminium power) after the war. In Suriname, the Brokopondo Reservoir was constructed to provide electricity for the Alcoa aluminium industry. New Zealand's Manapouri Power Station was constructed to supply electricity to the aluminium smelter at Tiwai Point.

Ecosystem damage and loss of land
Hydroelectric power stations that use dams would submerge large areas of land due to the requirement of a reservoir.
Large reservoirs required for the operation of hydroelectric power stations result in submersion of extensive areas upstream of the dams, destroying biologically rich and productive lowland and riverine valley forests, marshland and grasslands. The loss of land is often exacerbated by habitat fragmentation of surrounding areas caused by the reservoir.
Hydroelectric projects can be disruptive to surrounding aquatic ecosystems both upstream and downstream of the plant site. Generation of hydroelectric power changes the downstream river environment. Water exiting a turbine usually contains very little suspended sediment, which can lead to scouring of river beds and loss of riverbanks. Since turbine gates are often opened intermittently, rapid or even daily fluctuations in river flow are observed. 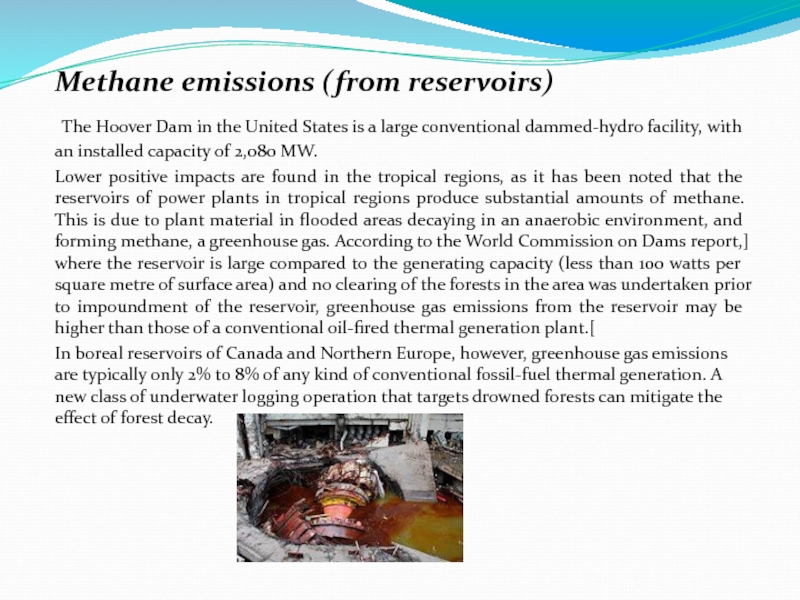 Methane emissions (from reservoirs)
The Hoover Dam in the United States is a large conventional dammed-hydro facility, with an installed capacity of 2,080 MW.
Lower positive impacts are found in the tropical regions, as it has been noted that the reservoirs of power plants in tropical regions produce substantial amounts of methane. This is due to plant material in flooded areas decaying in an anaerobic environment, and forming methane, a greenhouse gas. According to the World Commission on Dams report,] where the reservoir is large compared to the generating capacity (less than 100 watts per square metre of surface area) and no clearing of the forests in the area was undertaken prior to impoundment of the reservoir, greenhouse gas emissions from the reservoir may be higher than those of a conventional oil-fired thermal generation plant.[
In boreal reservoirs of Canada and Northern Europe, however, greenhouse gas emissions are typically only 2% to 8% of any kind of conventional fossil-fuel thermal generation. A new class of underwater logging operation that targets drowned forests can mitigate the effect of forest decay.

Sizes of Hydroelectric Power Plants
Facilities range in size from large power plants that supply many consumers with electricity to small and micro plants that individuals operate for their own energy needs or to sell power to utilities.
Large Hydropower
Although definitions vary, DOE defines large hydropower as facilities that have a capacity of more than 30 megawatts.
more than 30 megawatts.

Although definitions vary, DOE defines small hydropower as facilities that have a capacity of 100 kilowatts to 30 megawatts. 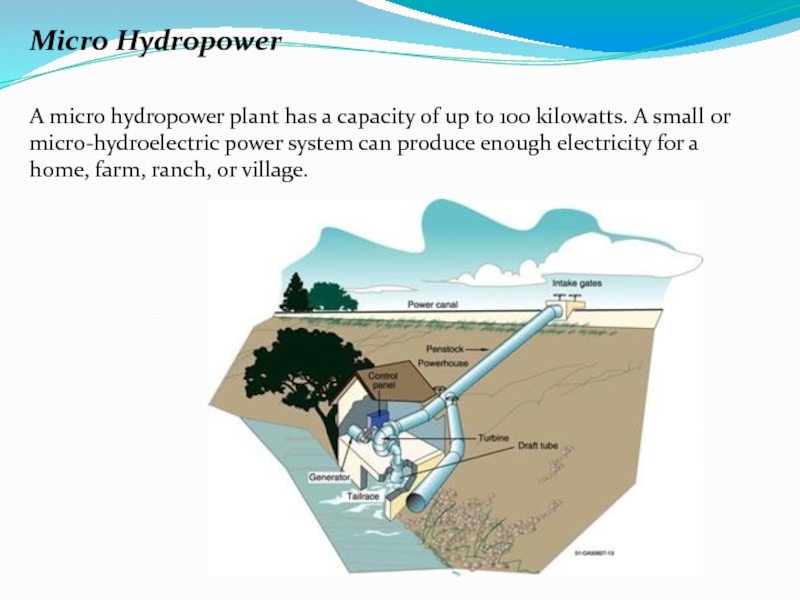 A micro hydropower plant has a capacity of up to 100 kilowatts. A small or micro-hydroelectric power system can produce enough electricity for a home, farm, ranch, or village.