The life of Jean-Jacques Rousseau. 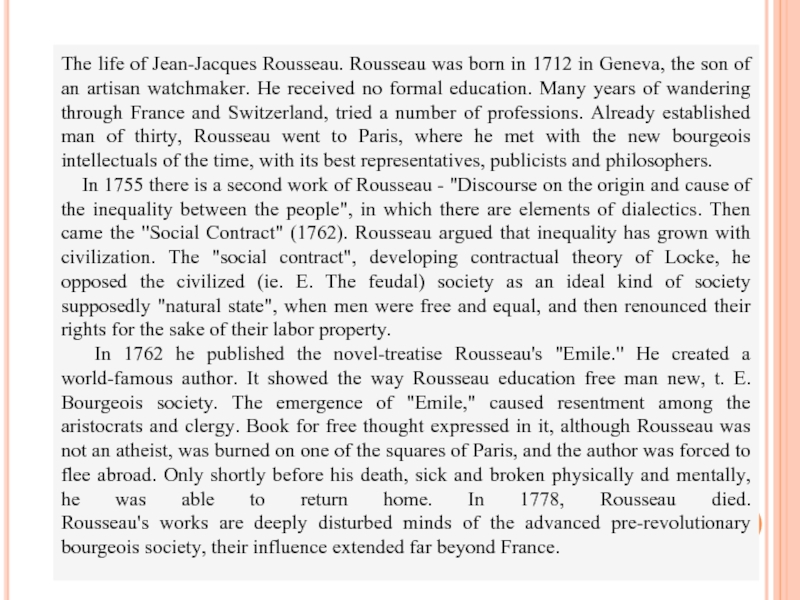 The life of Jean-Jacques Rousseau. Rousseau was born in 1712 in Geneva, the son of an artisan watchmaker. He received no formal education. Many years of wandering through France and Switzerland, tried a number of professions. Already established man of thirty, Rousseau went to Paris, where he met with the new bourgeois intellectuals of the time, with its best representatives, publicists and philosophers.
In 1755 there is a second work of Rousseau - "Discourse on the origin and cause of the inequality between the people", in which there are elements of dialectics. Then came the "Social Contract" (1762). Rousseau argued that inequality has grown with civilization. The "social contract", developing contractual theory of Locke, he opposed the civilized (ie. E. The feudal) society as an ideal kind of society supposedly "natural state", when men were free and equal, and then renounced their rights for the sake of their labor property.
In 1762 he published the novel-treatise Rousseau's "Emile." He created a world-famous author. It showed the way Rousseau education free man new, t. E. Bourgeois society. The emergence of "Emile," caused resentment among the aristocrats and clergy. Book for free thought expressed in it, although Rousseau was not an atheist, was burned on one of the squares of Paris, and the author was forced to flee abroad. Only shortly before his death, sick and broken physically and mentally, he was able to return home. In 1778, Rousseau died. Rousseau's works are deeply disturbed minds of the advanced pre-revolutionary bourgeois society, their influence extended far beyond France.

"Nature wants children to be children before they become adults," - wrote Rousseau. He believed that education is obtained from three sources: from nature, from the people around them, and from things. Education nature, in his view, carried out by "internal" development of human capacities, the development of the senses; education of people - IT accustoming man to use the development of these abilities and authorities; and finally, training on things - it is your own human experience, acquired them from the things with which he is faced and which it is exposed. The proper education will be when all three factors (education of nature, people, things or external circumstances) act in concert, in the same direction.
In close connection with the natural raising Rousseau put and free education. The first of the natural rights of man, he said, - freedom. Based on this position, he opposed the scholastic school, with its rote, harsh discipline, corporal punishment and suppression of the child's personality. He demanded respect for the child's personality, to consider their interests and needs. This positive value of his call for free education.
Russo Attached great importance to the guiding role of the teacher, but I understood the role originally, in its own way. Mentor, he said, only leads his pupil to resolve the issue, directs his interests so that the child does not notice, has mainly indirect effects. It organizes all the media, all surrounding the impact of the child so that they suggest some solutions. He denied coercion as a method of education.

The value of the pedagogical theory of Rousseau.

Rousseau occupied an important place among the philosophers of the Enlightenment in the ideological preparation of the French Revolution of 1789. Despite a number of contradictions and errors, his pedagogical views played a historically progressive role.
His views were the antithesis of the feudal pedagogy and full of ardent love for the child. Rousseau demanded active learning methods, taking into account the child's age characteristics, employment training, training close connection with life.
After the French bourgeois revolution of 1789-1794 was completed, to the educational ideas of Rousseau bourgeois teachers were treated with suspicion. Democrat Rousseau seems dangerous, his thoughts about the education of active, self-thinking, free man ran counter to strengthen the reactionary ideology of bourgeois society.
Krupskaya emphasized that the legacy of Rousseau's "rejects modern, decrepit bourgeoisie. The ancestors of her, is not separated even the interests of his class from the affairs of the people, praised Rousseau; the present-day bourgeoisie refers to Rousseau's cold down, and although the tradition calls it "great", but always adds the "utopian." Moreover, under the Utopia understands not only what is truly utopian in the works of Rousseau, but its democracy, its respect to the "man" to "labor" 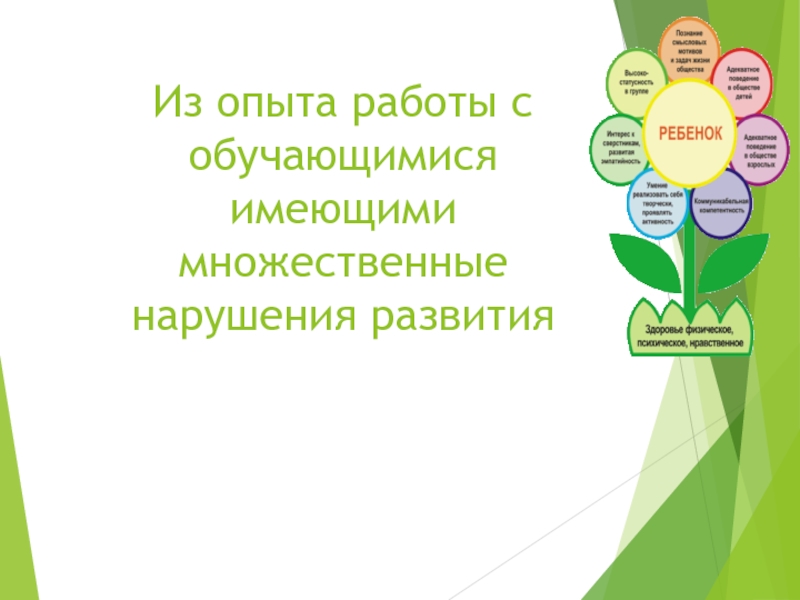