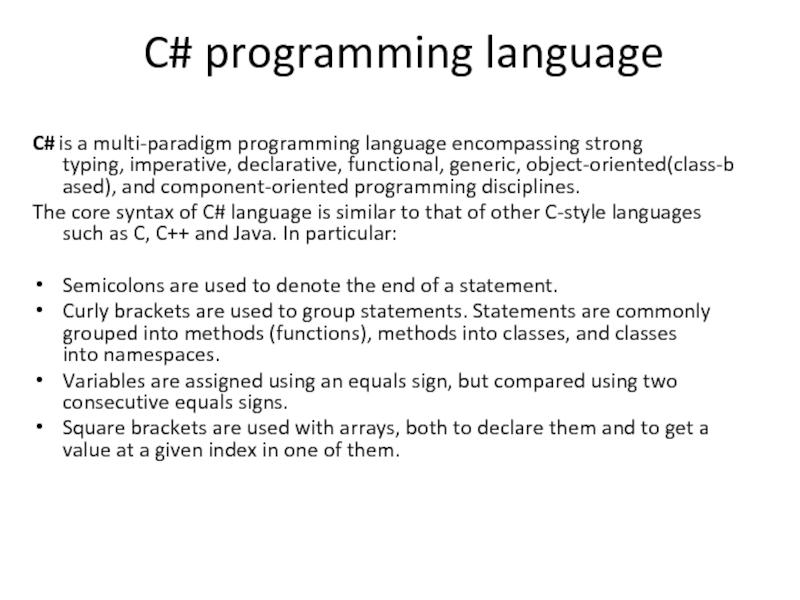 C# is a multi-paradigm programming language encompassing strong typing, imperative, declarative, functional, generic, object-oriented(class-based), and component-oriented programming disciplines.
The core syntax of C# language is similar to that of other C-style languages such as C, C++ and Java. In particular:

Semicolons are used to denote the end of a statement.
Curly brackets are used to group statements. Statements are commonly grouped into methods (functions), methods into classes, and classes into namespaces.
Variables are assigned using an equals sign, but compared using two consecutive equals signs.
Square brackets are used with arrays, both to declare them and to get a value at a given index in one of them.

Data is the fundamental currency of the computer. All computer processing deals with analysis, manipulation and processing of data. Data is entered, stored and retrieved from computers. It is not surprising then, to learn that data is also fundamental to the C# language.

C# is a strongly typed language, that is, every object or entity you create in a program must have definite type. This allows the compiler to know how big it is (i.e. how much storage is required in memory) and what it can do (i.e. and thereby make sure that the programmer is not misusing it). There are thirteen basic data types in C#, note that 1 byte equals 8 bits and each bit can take one of two values (i.e. 0 or 1). 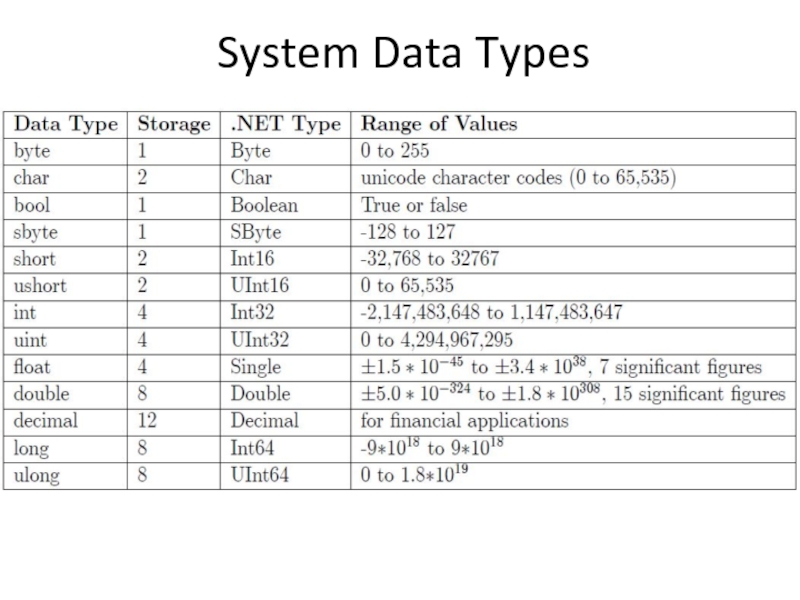 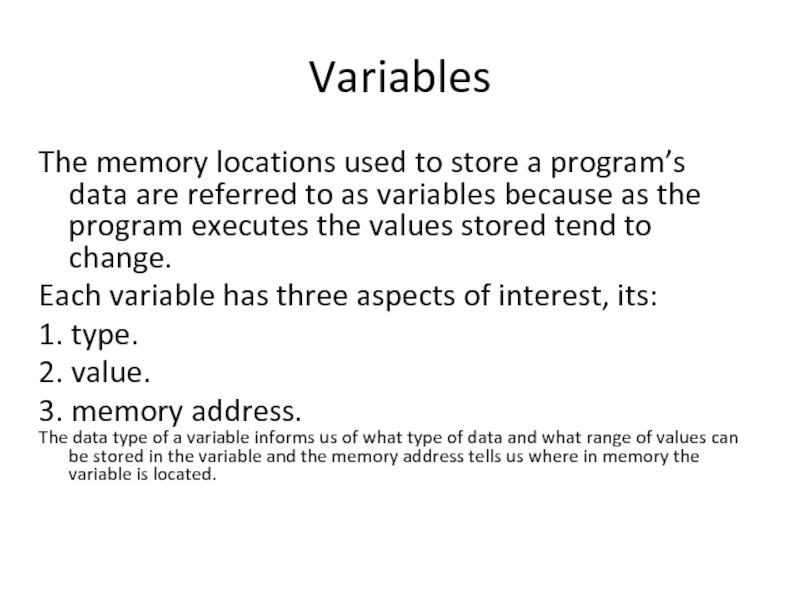 The memory locations used to store a program’s data are referred to as variables because as the program executes the values stored tend to change.
Each variable has three aspects of interest, its:
1. type.
2. value.
3. memory address.
The data type of a variable informs us of what type of data and what range of values can be stored in the variable and the memory address tells us where in memory the variable is located.

The names of variables and functions in C# are commonly called identifiers. There are a few rules to keep in mind when naming variables:
1. The first character must be a letter or an underscore.
2. An identifier can consist of letters, numbers and underscores only.
3. Reserved words (int, char, double, …) cannot be used as variable names.
In addition, please note carefully that C# is case sensitive. For example, the identifiers Rate, rate and RATE are all considered to be different by the C# compiler. 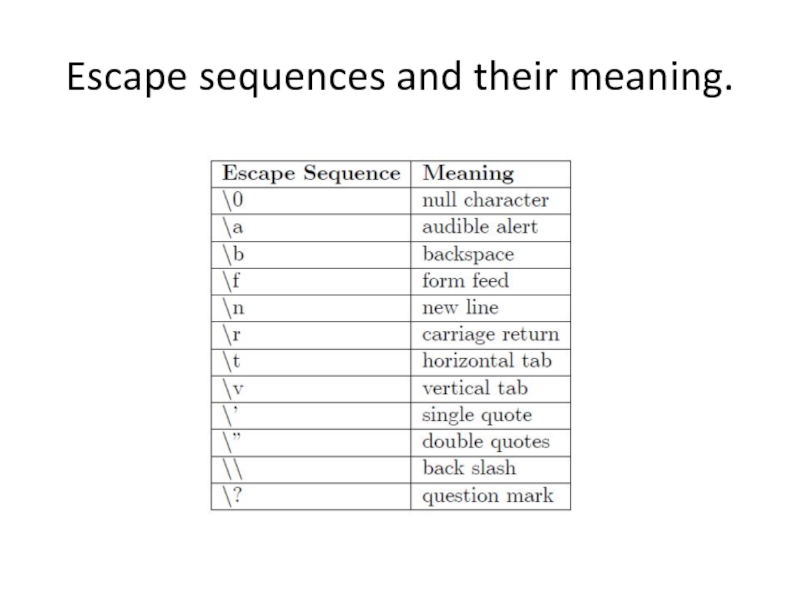 Escape sequences and their meaning.

Here the symbols {0}, {1} etc. are placeholders where the values of the optional arguments are substituted. 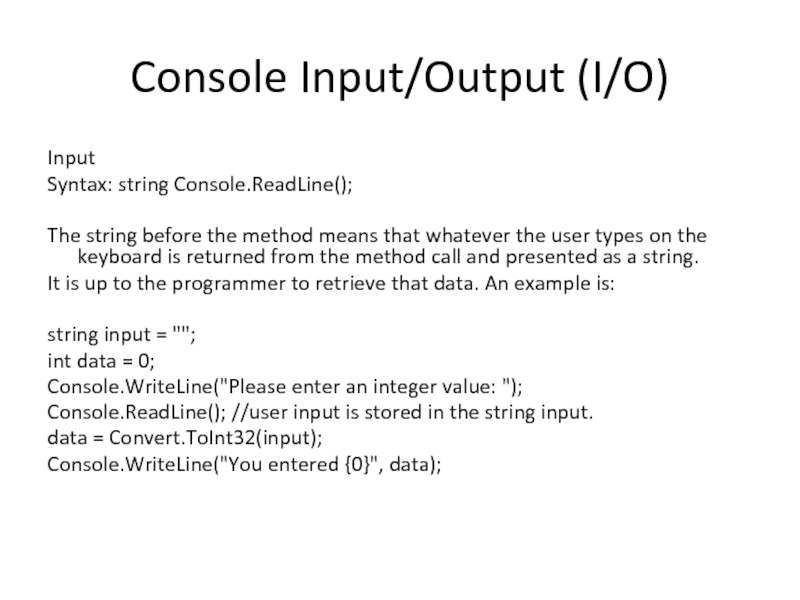 The string before the method means that whatever the user types on the keyboard is returned from the method call and presented as a string.
It is up to the programmer to retrieve that data. An example is:

A strong feature of C# is a very rich set of built in operators including arithmetic, relational, logical and bitwise operators.
Assignment =
Syntax:

Increment (++) and decrement (- -) are unary operators which cause the value of the
variable they act upon to be incremented or decremented by 1 respectively. These
operators are shorthand for a very common programming task.

These shorthand operators improve the speed of execution as they require the expression and variable to be evaluated once rather than twice. 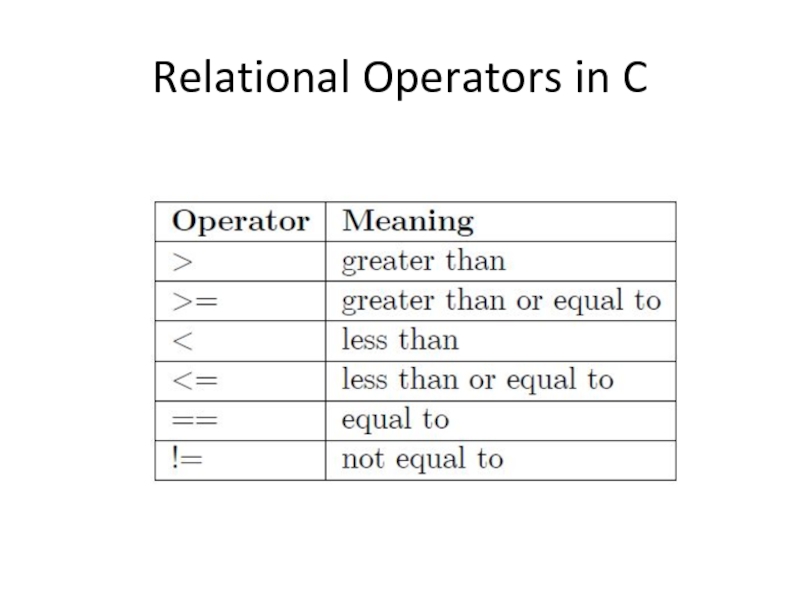 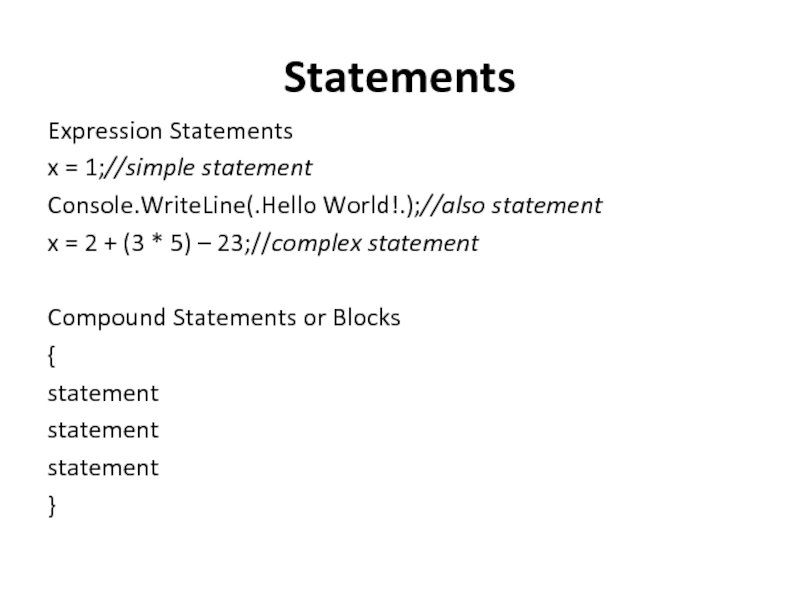 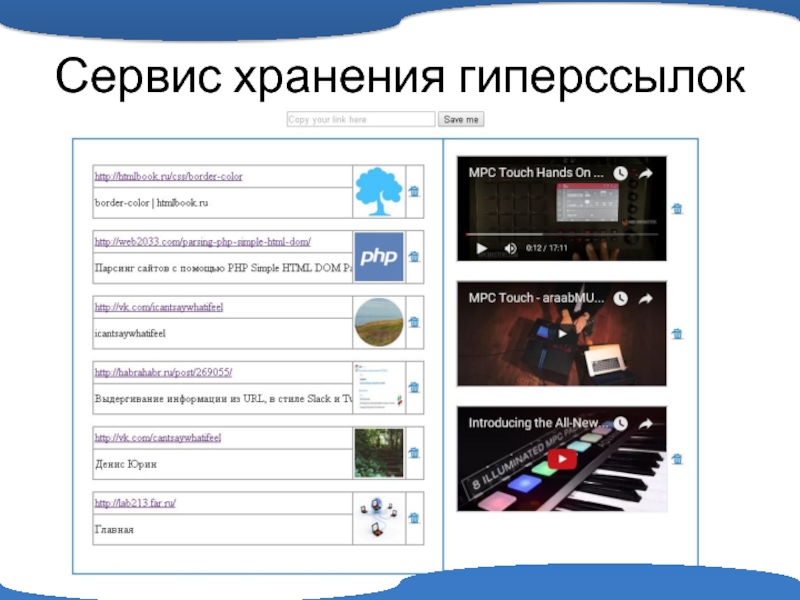