Sergey Andreevich Bobrovsky September 20, 1988, Russian hockey player, goalkeeper of the NHL club "Columbus Blue Jackets" and the Russian national team. Two-time winner of the prize to the best goalkeeper of the regular NHL championship - "Vezina Trofi" (2013, 2017). The first and only Russian player in history who received this award. World champion in 2014.

Sergei Bobrovsky is a pupil of "Metallurg" from his native Novokuznetsk. For the main team, he made his debut at the age of 18, playing a few matches in the 2006/2007 season. In the next season Bobrovsky became much more likely to play at the base of the club, and the regression of "Metallurg" continued. The defense of the outsider's gate was a difficult affair, but allowed the goalkeeper to quickly gain experience - Sergei was invited to the match of the stars of the Russian Super League. Bobrovsky played for Metallurg before the end of the 2009/2010 season, when his contract was over 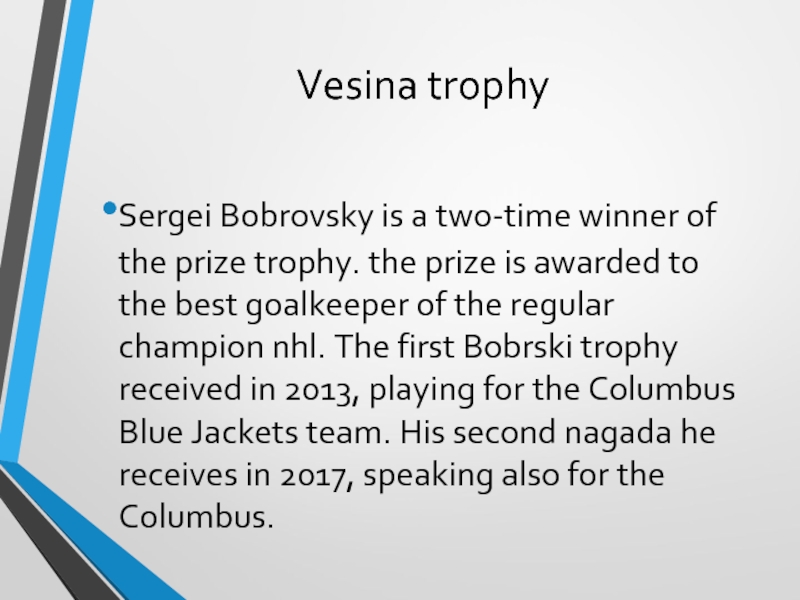 Sergei Bobrovsky is a two-time winner of the prize trophy. the prize is awarded to the best goalkeeper of the regular champion nhl. The first Bobrski trophy received in 2013, playing for the Columbus Blue Jackets team. His second nagada he receives in 2017, speaking also for the Columbus.

A little about the career in NHL.

During the lockout in the NHL in the season 2012/13 Bobrovsky played in the KHL SKA club. With the beginning of the season in the NHL, "Columbus" quickly dropped to the last place in the conference, and Bobrovsky and Steve Mason received about the same time in the frame of the gate. In March, "Columbus" was successful record for the club series of matches with points scored (without defeats in regular time), and Bobrovsky at this time almost invariably defended the gates of the club. He was recognized as the first star of the game week of March 4-10 and the third star of March. By the end of the championship, "Columbus" climbed to the play-off border, but eventually lost the passing eighth place, which gained the same number of points, "Minnesota". By the end of the season, Bobrovsky significantly improved his statistics (2nd in the league on the percentage of reflected shots) and despite the fact that the team did not make it to the playoffs, received "Vezina Trofi"

About the national team.

Bobrovsky was a substitute for his peer Semyon Varlamov at the 2006 Junior World Championships, where the Russian team became the fifth. In late summer 2007, the Super Series 2007, the remake of the 1972 Superseries, began. In the confrontation of the youth teams of Russia and Canada, the Russians were defeated, Bobrovsky played in half of the matches. At the World Youth Championship 2008 Bobrovsky was the main goalkeeper of the national team and won bronze medals with her. Before the World Cup 2010 Vyacheslav Bykov began the collection without the players of NHL and hockey players, who continued to fight for the Gagarin Cup. Among these reservists was summoned and Bobrovsky, who played in the match with Italy (3: 3), but the final squad for the World Cup in Germany is not included. 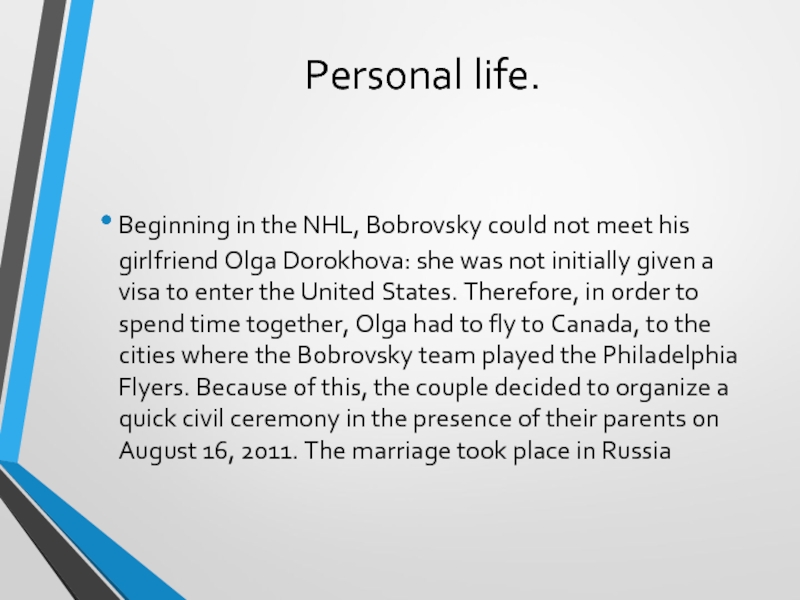 Beginning in the NHL, Bobrovsky could not meet his girlfriend Olga Dorokhova: she was not initially given a visa to enter the United States. Therefore, in order to spend time together, Olga had to fly to Canada, to the cities where the Bobrovsky team played the Philadelphia Flyers. Because of this, the couple decided to organize a quick civil ceremony in the presence of their parents on August 16, 2011. The marriage took place in Russia

Therefore, in order to spend time together, Olga had to fly to Canada, to the cities where the Bobrovsky team played the Philadelphia Flyers. Because of this, the couple decided to organize a quick civil ceremony in the presence of their parents on August 16, 2011. The marriage took place in Russia