The work was fulfilled
by Aralov Timur,
the student of the 10th form “B”
school №2 in Krasny Yar
2012

Theory of the origin of robots ...

The idea of artificial creatures is first mentioned in the ancient Greek myth of Cadmus, who killed the dragon, his teeth scattered on the ground and plowed them up from the teeth soldiers. Information about the first practical application of the prototype of the modern robots - mechanical men with automatic control - refer to the Hellenistic era. Then at the lighthouse erected on the island of Pharos, installed four gilded female figures. During the day they burn in the sun, and at night brightly lit, so it is always clearly visible from afar. These statues at regular intervals, turning beats bottles, at night the same time they made trumpet sounds, warning mariners of the proximity of the coast.

History of the first robots

About two hundred years ago mechanical people of Swiss watchmaker Pierre-Jacques Droz and his son Henri caused general surprise. About them a lot of talking and writing. To look at them, the whole crowd came to La Chaux de Fonds, Swiss village on the border with France, where they lived and worked. In 1770, in the spring, was born the first mechanical man. It was a mechanical "writing boy."  The scribe was the size of a five year old child. He was sitting on a bench in front of a table, and the entire drive mechanism housed inside the doll, which made it look even more elegant.  In his right hand was a small mechanical man quill pen (in those days the steel pens did not know). Scribe pen dipped in ink standing in front of him and wrote different words and even phrases without any human intervention. The letters were large, beautiful, even with the pressure and were arranged in neat lines. Leave space between words. Here in French reads: "His native city. Jacques Droz.
At work on the production of "writing boy" the son watched a sixteen-Pierre Droz - Henry. The boy inherited his father's exceptional ability to mechanics and three years later he took up the construction of a new mechanical man, who was on a plan to draw. The size of the painter was the same as his "big brother." In his right hand he held a pencil and drew various figures, as well as writing.

After some time, the two mechanics, father and son, Droz, have engaged with the invention and construction of the third mechanical man - a musician by the complexity of it was far superior to their "brothers." This doll was playing the harmonium, tapping his finger on the keys. Clearly and easily checkered she trills and rapid passages. Before the game, a musician examined the notes and did some preliminary hand movement. In addition, she turned her head and eyes, as if watching the position of the hands. Her chest was rising and falling, as if she was breathing. Having finished the game, musician bent her head, thanks to the audience for approval.
Their inventions and Pierre Henry Droz in 1774 demonstrated at the exhibition in Paris. The movements of all three mechanical people were so natural that many of the spectators were ready to consider them human beings. It was only when Droz opened from behind a complex clockwork mechanism of the creations, the audience began to believe that they face are truly works of art, and not living creatures.
Since these machines were called androids in honor of the young talented inventor of mechanical men - Henry Droz.

The origin of the word “robot”

At first glance it may seem that the "toys" of Pierre and Henri Droz have no relation to the development of technology. But this is not the case. Mechanical people Droz played a very important role in the overall process of human understanding of nature and laid the foundation for computer-controlled machines.. Who invented the word "robot" ? His name is not required to robots Cybernetics and even engineers, and ... the writer. It is Karel Capek - the famous Czech writer and playwright for the first time coined the word. In the early thirties Capek wrote the play, which he called «RUR». Its hero, an engineer Ross, managed to invent a complex machine that could do all the work of man. It is this author and human-machine called a "robot".

The end of the XIX century - the Russian engineer Pafnutii Chebyshev invented mechanism - stopohod having high traffic.
1898 - Nikola Tesla developed and demonstrated a miniature radio-controlled boat.
1921 - Czech writer Karel Capek introduced to the public a play called "R. WR ", from the beginning and took the word" robot ".
1930 - appeared superficially resemble human design devices that can perform simple movements and play phrases on the team man. 1950 - for work with radioactive materials began to develop mechanical manipulators who copied the hand movements a person in a safe place.
1960 - remote-controlled truck with crane, a television camera and a microphone was used to inspect the area and sampling in areas of high radioactivity.
1968 - Japanese company Kawasaki Heavy Industries, Ltd. received a license to manufacture a robot from the U.S. firm Unimation Inc. and collected its first industrial robot.

1979 - in the MSTU. Bauman commissioned by the KGB was made apparatus for explosive ordnance disposal - ultra-light mobile robot MRK-01.
- the beginning of a commercial for robots manufactured on the basis of high technology.
1982 - 18-27 October 1982 in Leningrad, at the exhibition held at the Harbor International exhibition "Industrial Robots-82.“
1986 - for the first time at Chernobyl in the Soviet Union used robots for cleaning radioactive waste.
2005 - Russian Navy in the Baltic Sea were tested underwater robot spy "Dwarf".
2007 - Ministry of Internal Affairs in Perm, Russia conducted a test trial robot policeman P 001-BOAT.
2010 - in America in the sale new robot PR2.

My robot: the need to find a new model

In the world today there are a lot of robots with different functions, but their wide production lags. Also, not all models meet the broad demands of consumers. If all the models would meet all the needs of the people, then it would be enough to have at home one multifunctional robot. But, unfortunately, all the robots are not universal. It must have two or maybe three home robots. So, I think, still the majority of people have big problems with home everyday life. So, you need a robot - maid (cleaner). It can cope with cleaning the house and cooking.

It will also be very useful for robot - nurse. He takes care of the kids and not just about them. Now among us there are a lot of elderly people who need the help with the strong and reliable partners. This robot will help them to move around the house, on the streets, will provide the necessary medical care. In addition, such a robot will be for them a good talker and playmate. It is known that at this age, many older people are lonely and do not know where and who to go to. By the way, communication is necessary not only older, but sometimes for the young people. Such a robot needs first of all to those who have poor eyesight or with hearing. Now they have to use the services of guide dogs or special devices for the hearing. 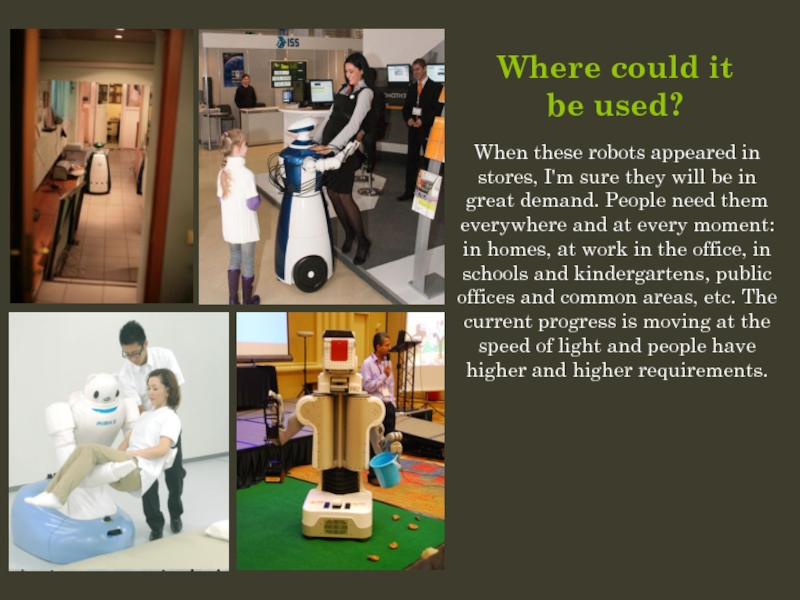 Where could it be used?

When these robots appeared in stores, I'm sure they will be in great demand. People need them everywhere and at every moment: in homes, at work in the office, in schools and kindergartens, public offices and common areas, etc. The current progress is moving at the speed of light and people have higher and higher requirements.