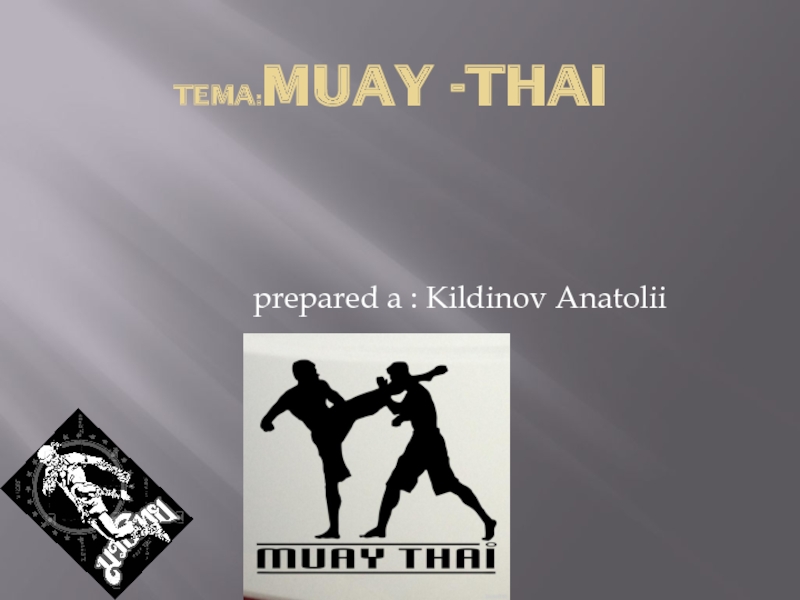 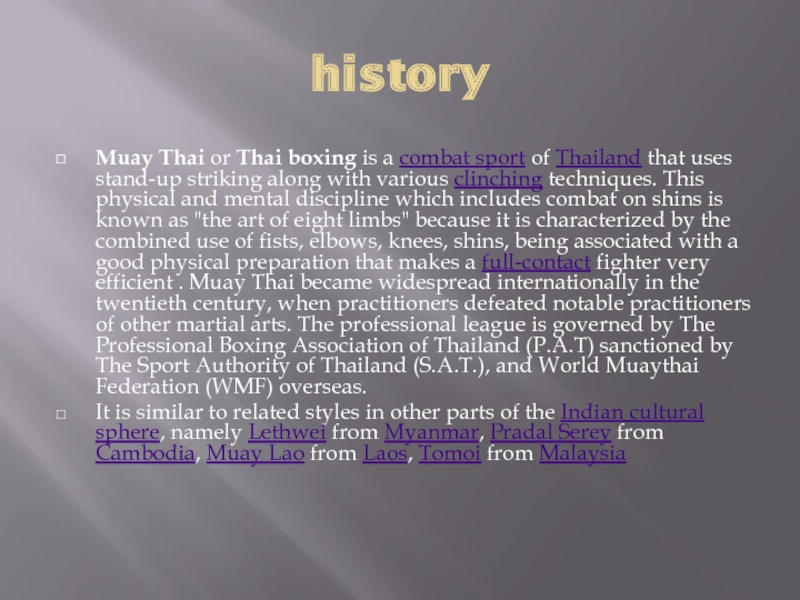 Muay Thai or Thai boxing is a combat sport of Thailand that uses stand-up striking along with various clinching techniques. This physical and mental discipline which includes combat on shins is known as "the art of eight limbs" because it is characterized by the combined use of fists, elbows, knees, shins, being associated with a good physical preparation that makes a full-contact fighter very efficient . Muay Thai became widespread internationally in the twentieth century, when practitioners defeated notable practitioners of other martial arts. The professional league is governed by The Professional Boxing Association of Thailand (P.A.T) sanctioned by The Sport Authority of Thailand (S.A.T.), and World Muaythai Federation (WMF) overseas.
It is similar to related styles in other parts of the Indian cultural sphere, namely Lethwei from Myanmar, Pradal Serey from Cambodia, Muay Lao from Laos, Tomoi from Malaysia 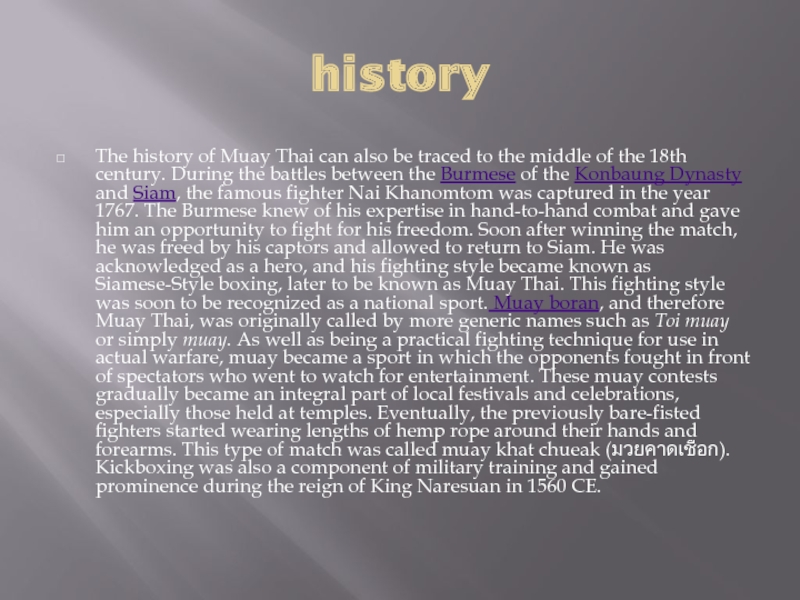 The history of Muay Thai can also be traced to the middle of the 18th century. During the battles between the Burmese of the Konbaung Dynasty and Siam, the famous fighter Nai Khanomtom was captured in the year 1767. The Burmese knew of his expertise in hand-to-hand combat and gave him an opportunity to fight for his freedom. Soon after winning the match, he was freed by his captors and allowed to return to Siam. He was acknowledged as a hero, and his fighting style became known as Siamese-Style boxing, later to be known as Muay Thai. This fighting style was soon to be recognized as a national sport. Muay boran, and therefore Muay Thai, was originally called by more generic names such as Toi muay or simply muay. As well as being a practical fighting technique for use in actual warfare, muay became a sport in which the opponents fought in front of spectators who went to watch for entertainment. These muay contests gradually became an integral part of local festivals and celebrations, especially those held at temples. Eventually, the previously bare-fisted fighters started wearing lengths of hemp rope around their hands and forearms. This type of match was called muay khat chueak (มวยคาดเชือก). Kickboxing was also a component of military training and gained prominence during the reign of King Naresuan in 1560 CE. 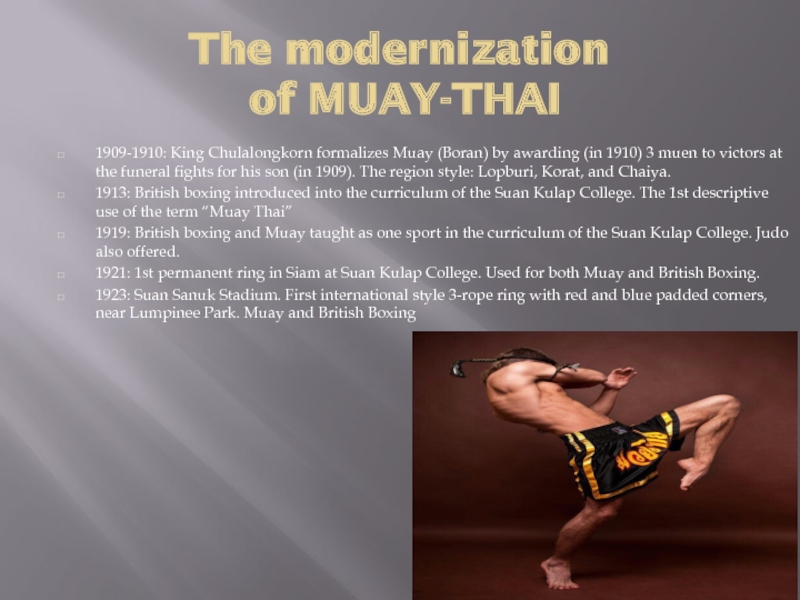 1909-1910: King Chulalongkorn formalizes Muay (Boran) by awarding (in 1910) 3 muen to victors at the funeral fights for his son (in 1909). The region style: Lopburi, Korat, and Chaiya.
1913: British boxing introduced into the curriculum of the Suan Kulap College. The 1st descriptive use of the term “Muay Thai”
1919: British boxing and Muay taught as one sport in the curriculum of the Suan Kulap College. Judo also offered.
1921: 1st permanent ring in Siam at Suan Kulap College. Used for both Muay and British Boxing.
1923: Suan Sanuk Stadium. First international style 3-rope ring with red and blue padded corners, near Lumpinee Park. Muay and British Boxing 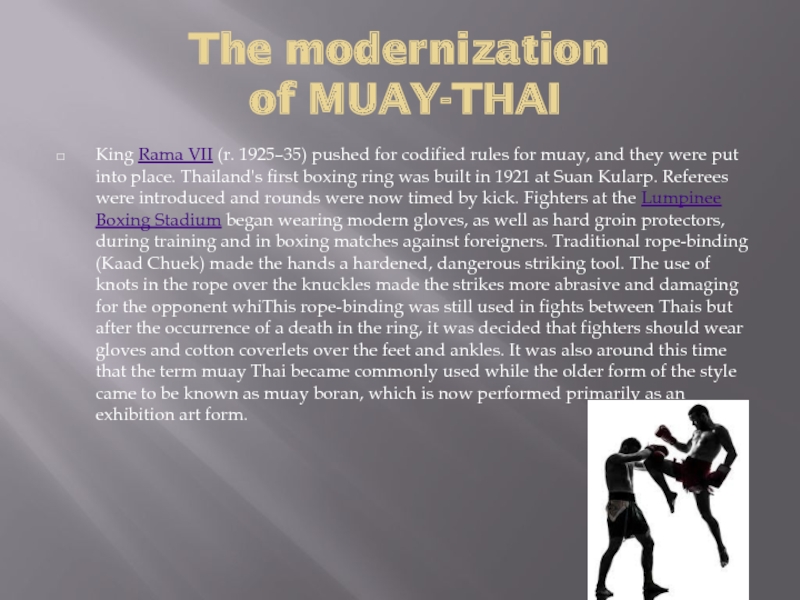 King Rama VII (r. 1925–35) pushed for codified rules for muay, and they were put into place. Thailand's first boxing ring was built in 1921 at Suan Kularp. Referees were introduced and rounds were now timed by kick. Fighters at the Lumpinee Boxing Stadium began wearing modern gloves, as well as hard groin protectors, during training and in boxing matches against foreigners. Traditional rope-binding (Kaad Chuek) made the hands a hardened, dangerous striking tool. The use of knots in the rope over the knuckles made the strikes more abrasive and damaging for the opponent whiThis rope-binding was still used in fights between Thais but after the occurrence of a death in the ring, it was decided that fighters should wear gloves and cotton coverlets over the feet and ankles. It was also around this time that the term muay Thai became commonly used while the older form of the style came to be known as muay boran, which is now performed primarily as an exhibition art form. 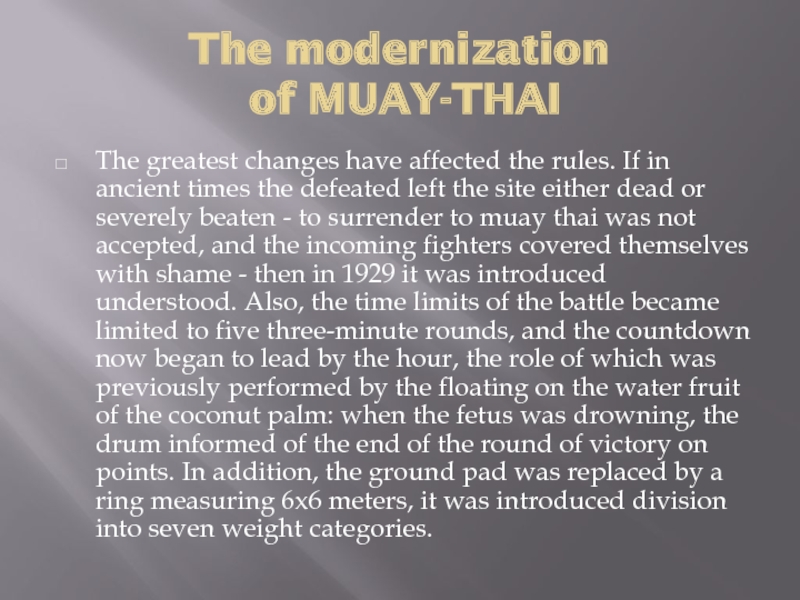 The greatest changes have affected the rules. If in ancient times the defeated left the site either dead or severely beaten - to surrender to muay thai was not accepted, and the incoming fighters covered themselves with shame - then in 1929 it was introduced understood. Also, the time limits of the battle became limited to five three-minute rounds, and the countdown now began to lead by the hour, the role of which was previously performed by the floating on the water fruit of the coconut palm: when the fetus was drowning, the drum informed of the end of the round of victory on points. In addition, the ground pad was replaced by a ring measuring 6x6 meters, it was introduced division into seven weight categories. 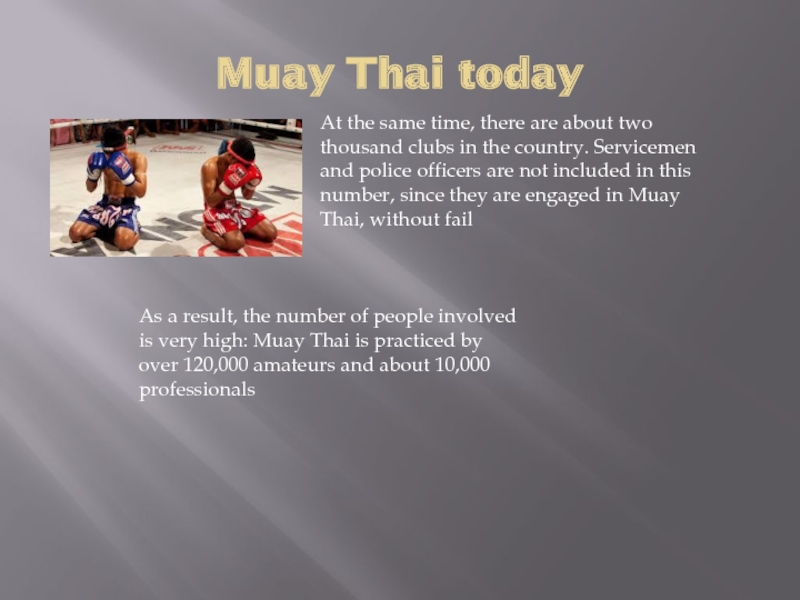 At the same time, there are about two thousand clubs in the country. Servicemen and police officers are not included in this number, since they are engaged in Muay Thai, without fail

As a result, the number of people involved is very high: Muay Thai is practiced by over 120,000 amateurs and about 10,000 professionals 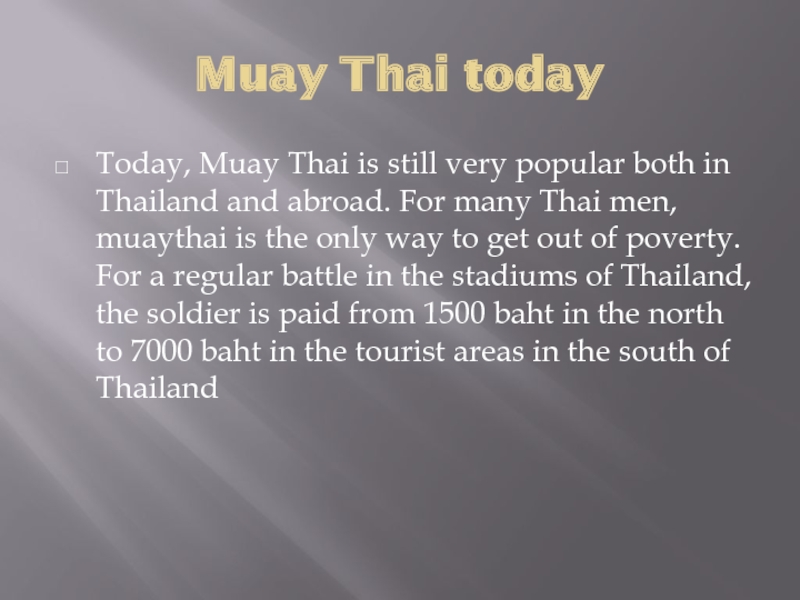 Today, Muay Thai is still very popular both in Thailand and abroad. For many Thai men, muaythai is the only way to get out of poverty. For a regular battle in the stadiums of Thailand, the soldier is paid from 1500 baht in the north to 7000 baht in the tourist areas in the south of Thailand 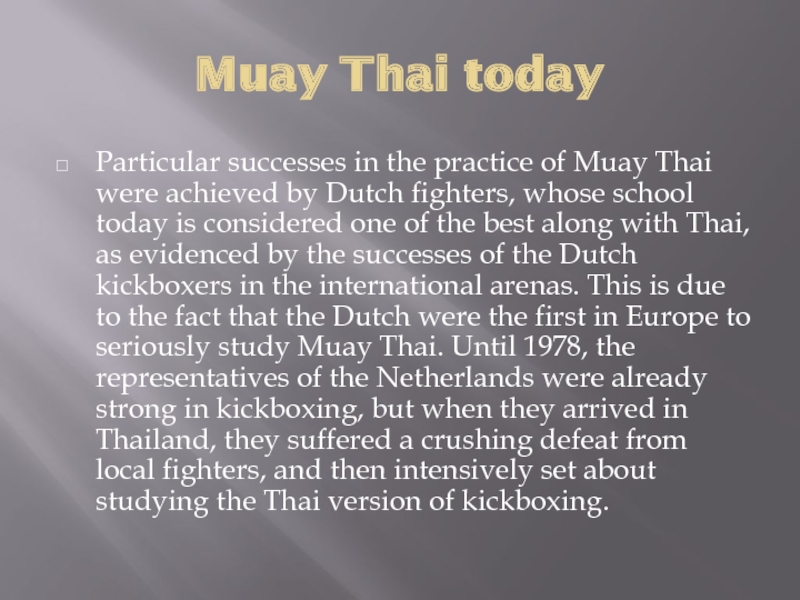 Particular successes in the practice of Muay Thai were achieved by Dutch fighters, whose school today is considered one of the best along with Thai, as evidenced by the successes of the Dutch kickboxers in the international arenas. This is due to the fact that the Dutch were the first in Europe to seriously study Muay Thai. Until 1978, the representatives of the Netherlands were already strong in kickboxing, but when they arrived in Thailand, they suffered a crushing defeat from local fighters, and then intensively set about studying the Thai version of kickboxing. 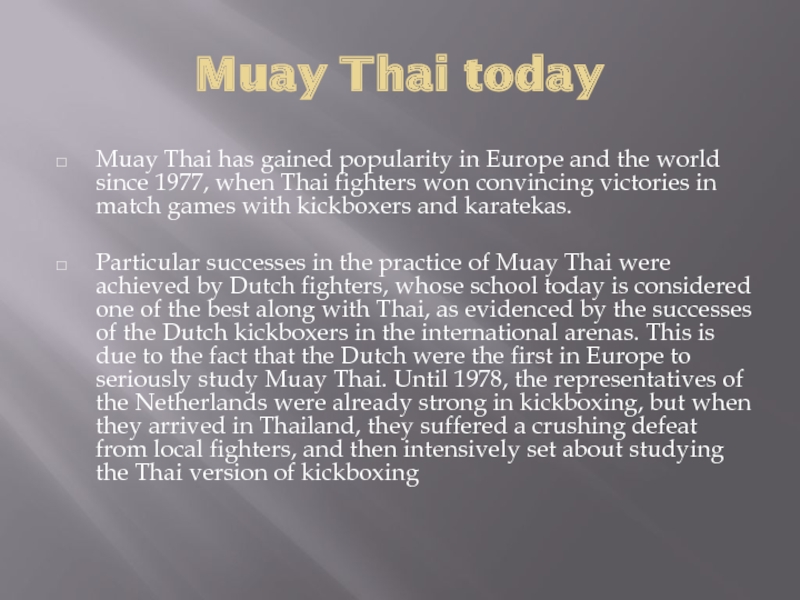 Muay Thai has gained popularity in Europe and the world since 1977, when Thai fighters won convincing victories in match games with kickboxers and karatekas.

Particular successes in the practice of Muay Thai were achieved by Dutch fighters, whose school today is considered one of the best along with Thai, as evidenced by the successes of the Dutch kickboxers in the international arenas. This is due to the fact that the Dutch were the first in Europe to seriously study Muay Thai. Until 1978, the representatives of the Netherlands were already strong in kickboxing, but when they arrived in Thailand, they suffered a crushing defeat from local fighters, and then intensively set about studying the Thai version of kickboxing 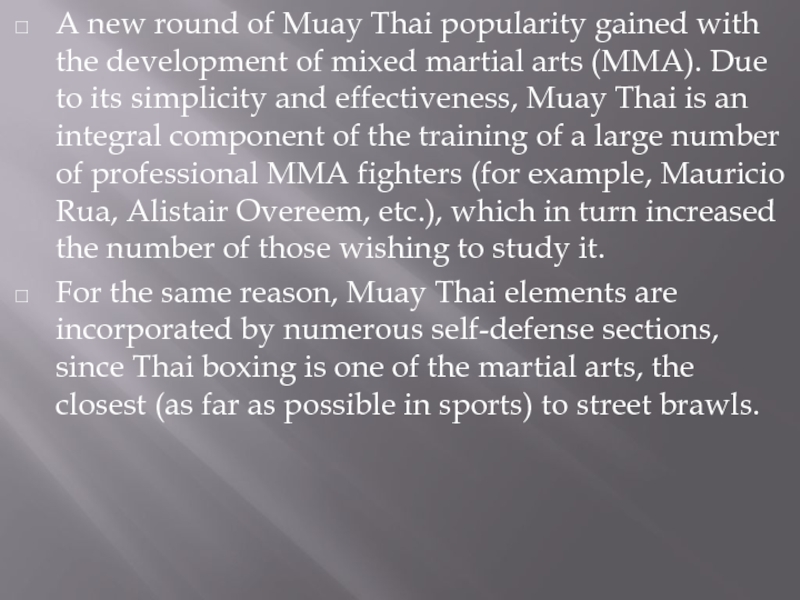 A new round of Muay Thai popularity gained with the development of mixed martial arts (MMA). Due to its simplicity and effectiveness, Muay Thai is an integral component of the training of a large number of professional MMA fighters (for example, Mauricio Rua, Alistair Overeem, etc.), which in turn increased the number of those wishing to study it.
For the same reason, Muay Thai elements are incorporated by numerous self-defense sections, since Thai boxing is one of the martial arts, the closest (as far as possible in sports) to street brawls. 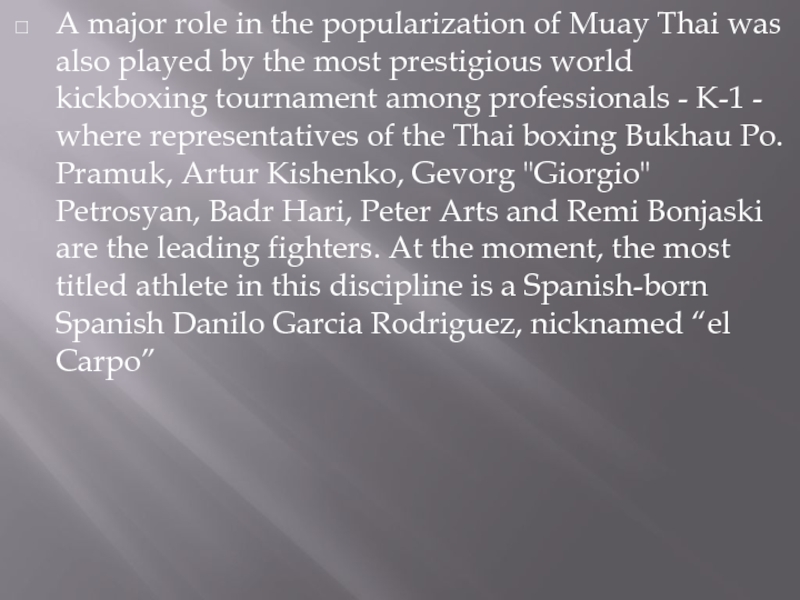 A major role in the popularization of Muay Thai was also played by the most prestigious world kickboxing tournament among professionals - K-1 - where representatives of the Thai boxing Bukhau Po. Pramuk, Artur Kishenko, Gevorg "Giorgio" Petrosyan, Badr Hari, Peter Arts and Remi Bonjaski are the leading fighters. At the moment, the most titled athlete in this discipline is a Spanish-born Spanish Danilo Garcia Rodriguez, nicknamed “el Carpo” 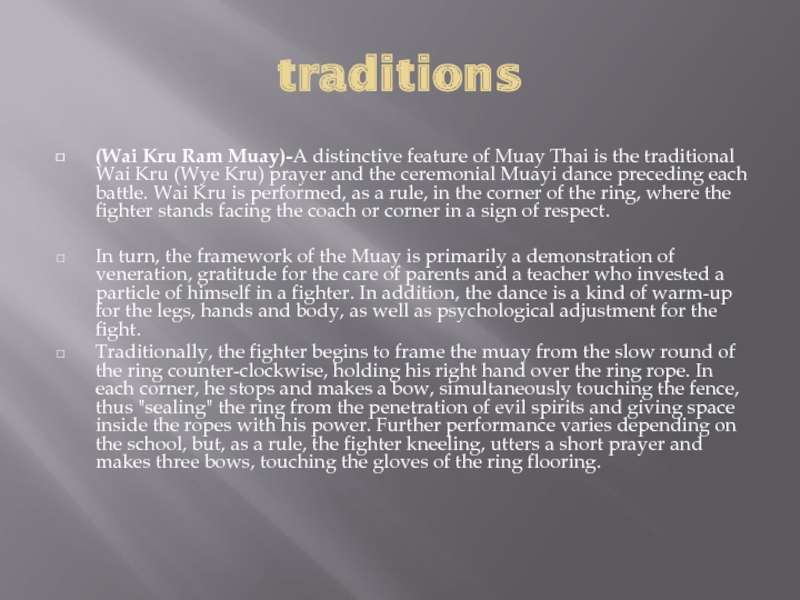 (Wai Kru Ram Muay)-A distinctive feature of Muay Thai is the traditional Wai Kru (Wye Kru) prayer and the ceremonial Muayi dance preceding each battle. Wai Kru is performed, as a rule, in the corner of the ring, where the fighter stands facing the coach or corner in a sign of respect.

In turn, the framework of the Muay is primarily a demonstration of veneration, gratitude for the care of parents and a teacher who invested a particle of himself in a fighter. In addition, the dance is a kind of warm-up for the legs, hands and body, as well as psychological adjustment for the fight.
Traditionally, the fighter begins to frame the muay from the slow round of the ring counter-clockwise, holding his right hand over the ring rope. In each corner, he stops and makes a bow, simultaneously touching the fence, thus "sealing" the ring from the penetration of evil spirits and giving space inside the ropes with his power. Further performance varies depending on the school, but, as a rule, the fighter kneeling, utters a short prayer and makes three bows, touching the gloves of the ring flooring. 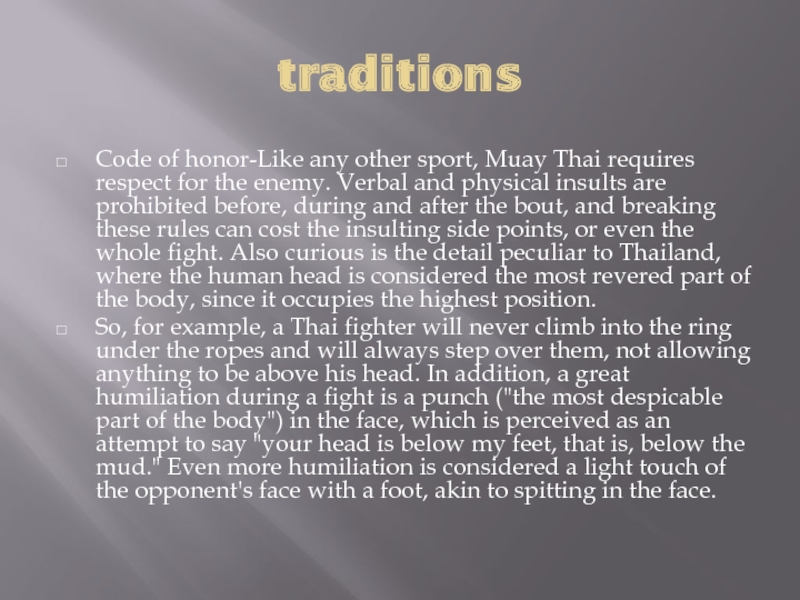 Code of honor-Like any other sport, Muay Thai requires respect for the enemy. Verbal and physical insults are prohibited before, during and after the bout, and breaking these rules can cost the insulting side points, or even the whole fight. Also curious is the detail peculiar to Thailand, where the human head is considered the most revered part of the body, since it occupies the highest position.
So, for example, a Thai fighter will never climb into the ring under the ropes and will always step over them, not allowing anything to be above his head. In addition, a great humiliation during a fight is a punch ("the most despicable part of the body") in the face, which is perceived as an attempt to say "your head is below my feet, that is, below the mud." Even more humiliation is considered a light touch of the opponent's face with a foot, akin to spitting in the face. 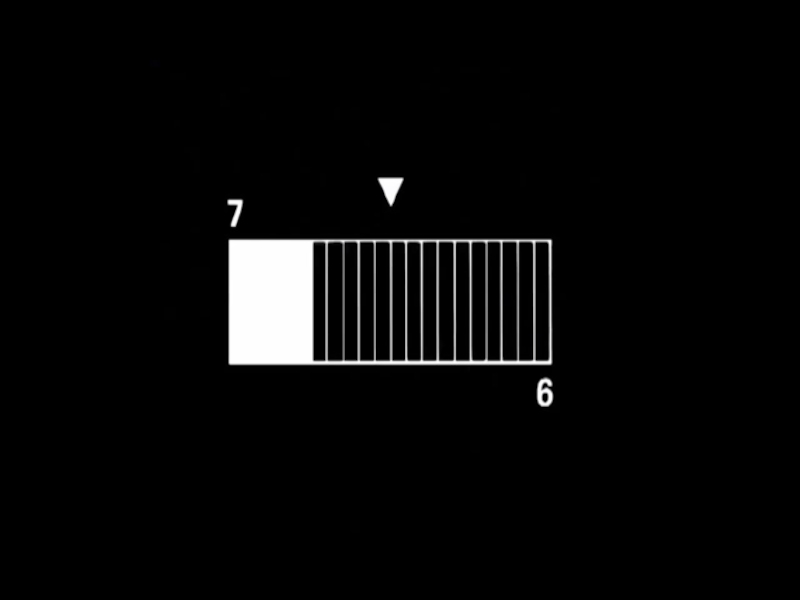 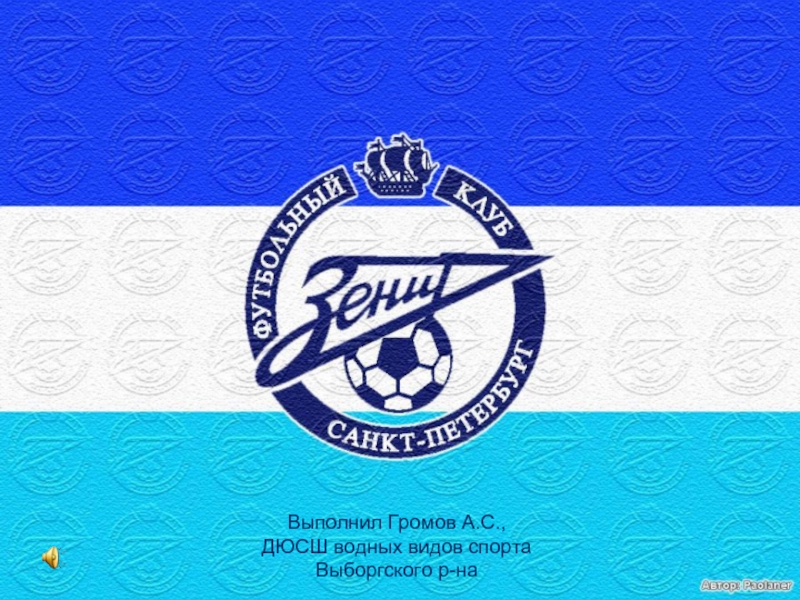 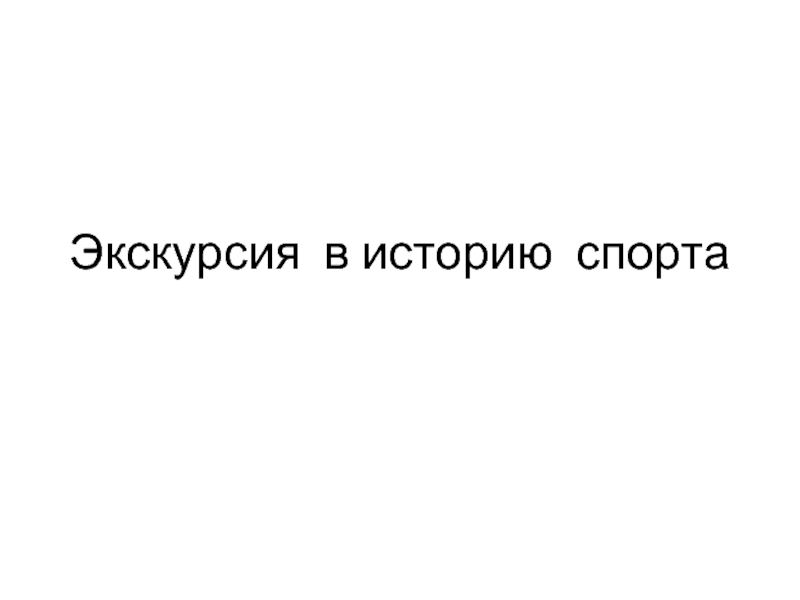 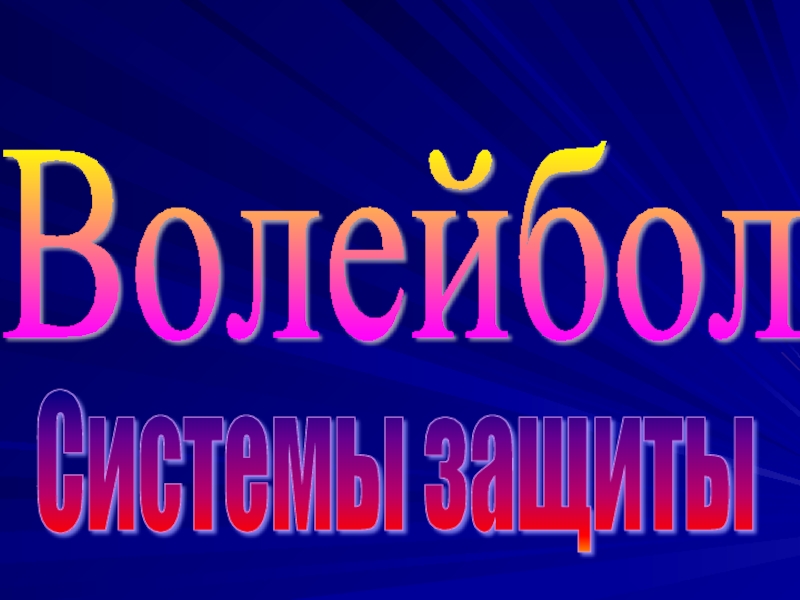 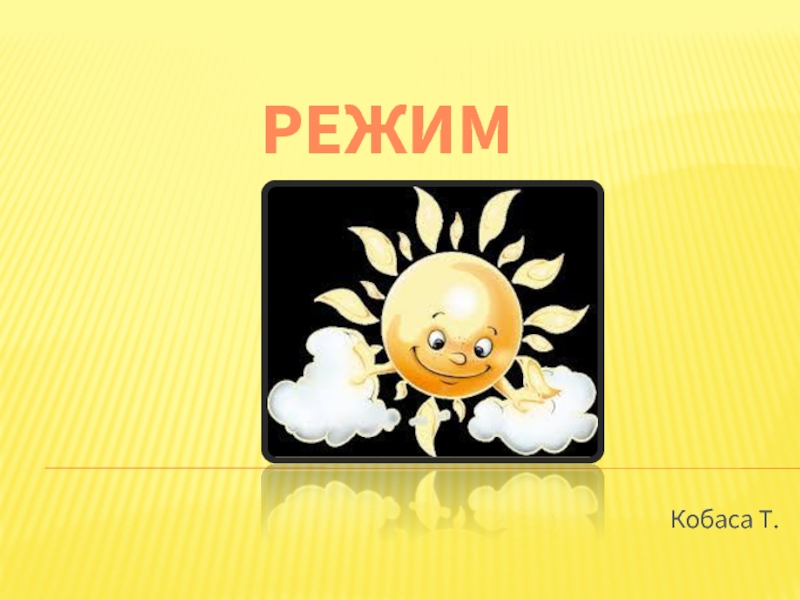 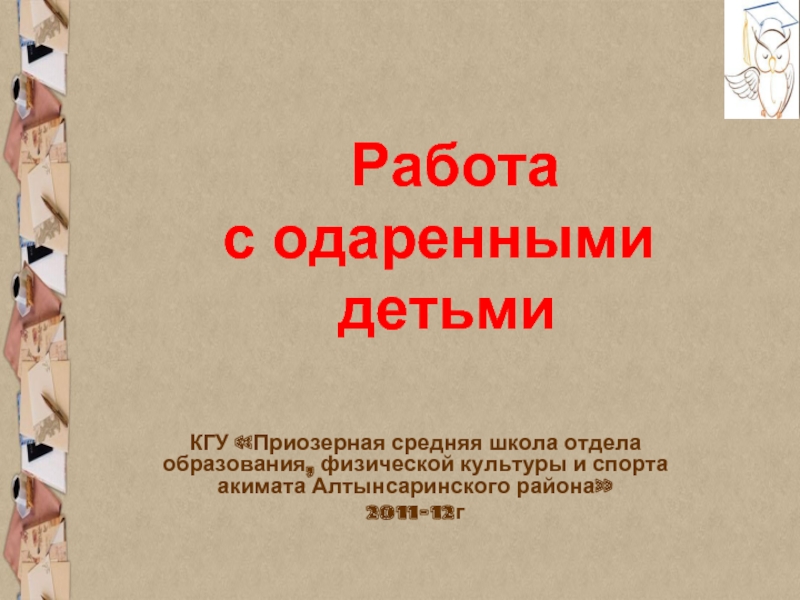 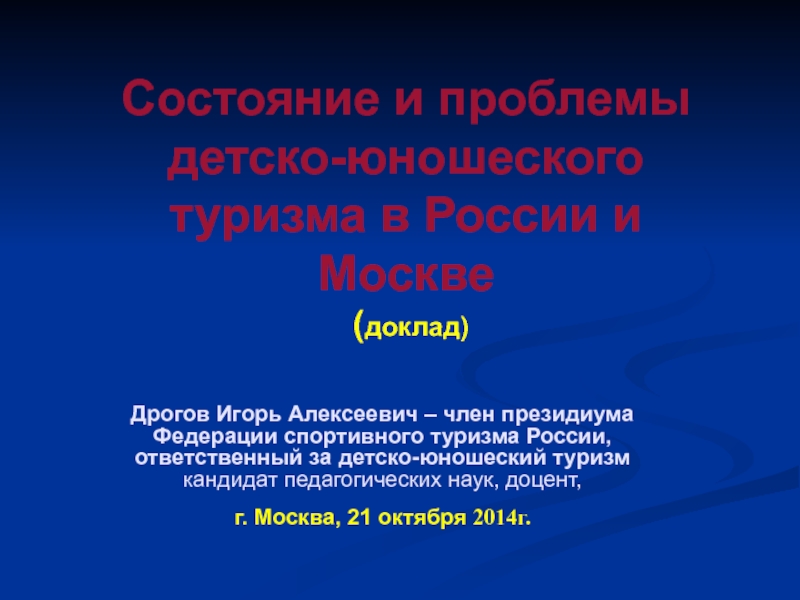