Chan is one of the most recognizable and influential cinematic personalities in the world, gaining a widespread following in both the Eastern and Westernhemisphere, and has received stars on the Hong Kong Avenue of Stars, and the Hollywood Walk of Fame.[6][7] He has been referenced in various pop songs, cartoons, and video games. He is an operatically trained vocalist and is also a Cantopop and Mandopop star, having released a number of albums and sung many of the theme songs for the films in which he has starred. He is also a globally known philanthropist, and has been named as one of the top 10 most charitable celebrities by Forbes.[8][9] In 2015, Forbes magazine estimated his net worth to be $350 million, and as of 2016, he was the second highest paid actor in the world. 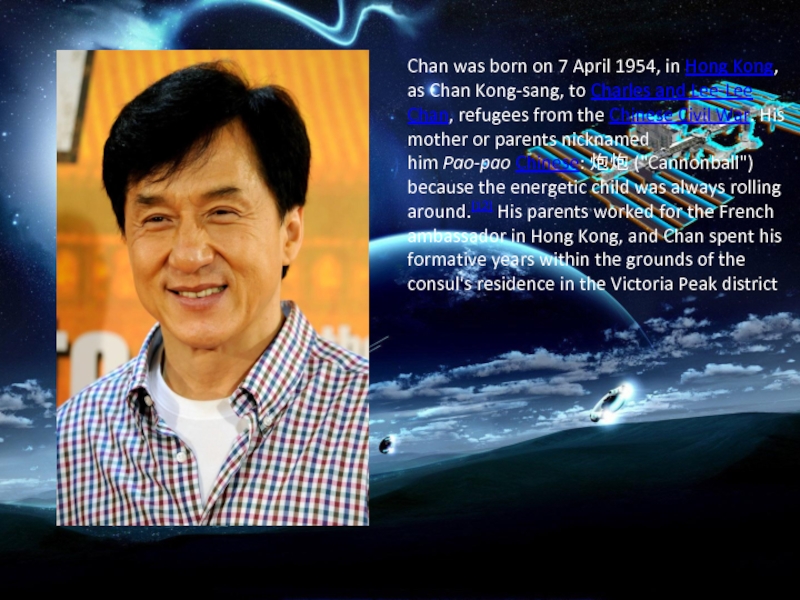 Chan was born on 7 April 1954, in Hong Kong, as Chan Kong-sang, to Charles and Lee-Lee Chan, refugees from the Chinese Civil War. His mother or parents nicknamed him Pao-pao Chinese: 炮炮 ("Cannonball") because the energetic child was always rolling around.[12] His parents worked for the French ambassador in Hong Kong, and Chan spent his formative years within the grounds of the consul's residence in the Victoria Peak district

Chan's first major breakthrough was the 1978 film Snake in the Eagle's Shadow, shot while he was loaned to Seasonal Film Corporation under a two-picture deal.[26] Director Yuen Woo-ping allowed Chan complete freedom over his stunt work. The film established the comedic kung fu genre, and proved refreshing to the Hong Kong audience.[27] Chan then starred inDrunken Master, which finally propelled him to mainstream success.[28]
Upon Chan's return to Lo Wei's studio, Lo tried to replicate the comedic approach of Drunken Master, producing Half a Loaf of Kung Fu and Spiritual Kung Fu.[23] He also gave Chan the opportunity to make his directorial debut in The Fearless Hyena. When Willie Chan left the company, he advised Jackie to decide for himself whether or not to stay with Lo Wei. During the shooting of Fearless Hyena Part II, Chan broke his contract and joined Golden Harvest, prompting Lo to blackmail Chan with triads, blaming Willie for his star's departure. The dispute was resolved with the help of fellow actor and director Jimmy Wang Yu, allowing Chan to stay with Golden Harves

In 1988, Chan starred alongside Sammo Hung and Yuen Biao for the last time to date, in the film Dragons Forever. Hung co-directed with Corey Yuen, and the villain in the film was played by Yuen Wah, both of whom were fellow graduates of the China Drama Academy.
In the late 1980s and early 1990s, Chan starred in a number of successful sequels beginning with Project A Part II andPolice Story 2, which won the award for Best Action Choreography at the 1989 Hong Kong Film Awards. This was followed by Armour of God II: Operation Condor, and Police Story 3: Super Cop, for which Chan won the Best Actor Award at the 1993 Golden Horse Film Festival. In 1994, Chan reprised his role as Wong Fei-hung in Drunken Master II, which was listed in Time Magazine's All-Time 100 Movies.[37] Another sequel, Police Story 4: First Strike, brought more awards and domestic box office success for Chan, but did not fare as well in foreign markets

In 2013, Chan starred in Police Story 2013, a reboot of the Police Story franchise directed by Ding Sheng, and it was released in China at the end of 2013. Chan's next film Dragon Blade was released in early 2015.
In 2015, Chan was awarded the title of "Datuk" by Malaysia as he helped Malaysia to boost its tourism, especially in Kuala Lumpur where he previously shot his films.[64] In early 2017, Chan's new film titled "Kung Fu Yoga", a Chinese-Indian project, which also starred Disha Patani, Sonu Sood and Amyra Dastur, was released. The film reunited Chan with director Stanley Tong, who directed a number of Chan's films in the 1990s. Upon release, the film was a huge success at the box office, and became the 5th highest-grossing film in China, one month after its release.
He starred in his own production Skiptrace, which was released in 2016.
Chan starred in the 2016 action-comedy Railroad Tigers and the 2017 action-thriller The Foreigner, an Anglo-Chinese production. He will also star in the science-fiction film Bleeding Steel. 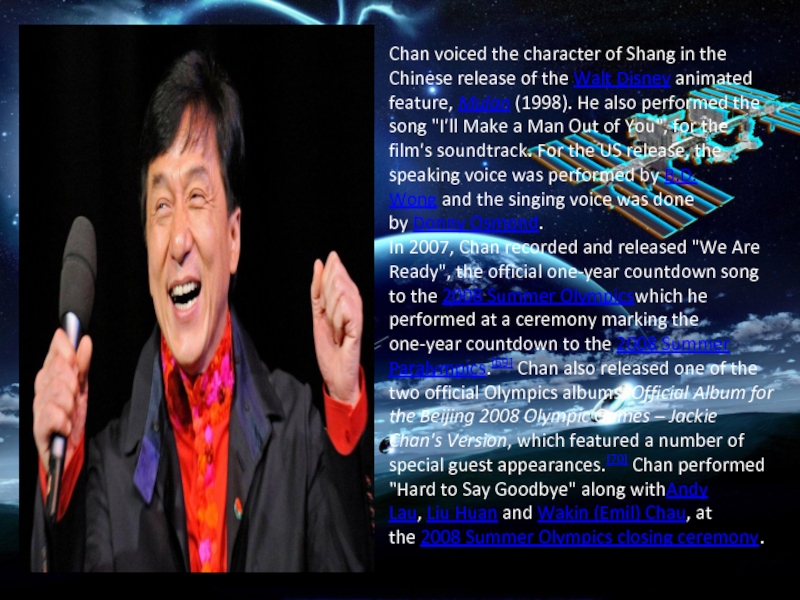 Chan voiced the character of Shang in the Chinese release of the Walt Disney animated feature, Mulan (1998). He also performed the song "I'll Make a Man Out of You", for the film's soundtrack. For the US release, the speaking voice was performed by B.D. Wong and the singing voice was done by Donny Osmond.
In 2007, Chan recorded and released "We Are Ready", the official one-year countdown song to the 2008 Summer Olympicswhich he performed at a ceremony marking the one-year countdown to the 2008 Summer Paralympics.[69] Chan also released one of the two official Olympics albums, Official Album for the Beijing 2008 Olympic Games – Jackie Chan's Version, which featured a number of special guest appearances.[70] Chan performed "Hard to Say Goodbye" along withAndy Lau, Liu Huan and Wakin (Emil) Chau, at the 2008 Summer Olympics closing ceremony. 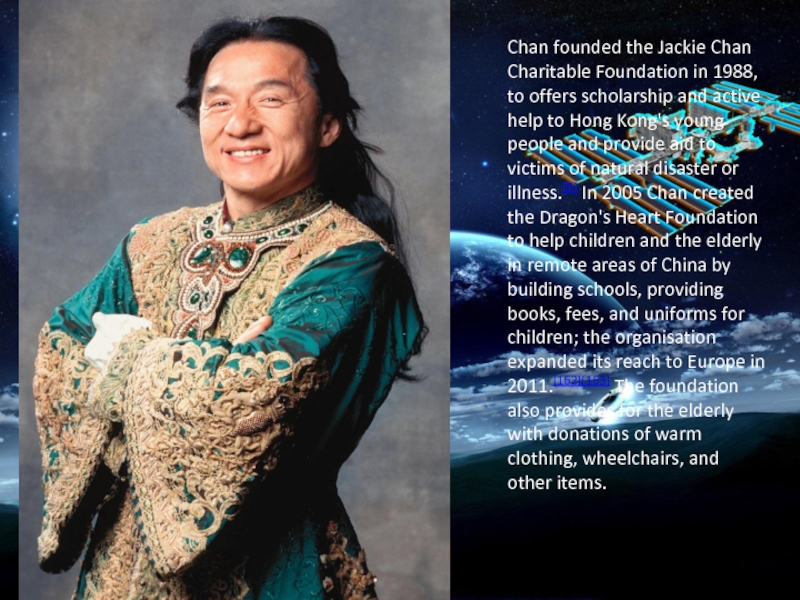 Chan founded the Jackie Chan Charitable Foundation in 1988, to offers scholarship and active help to Hong Kong's young people and provide aid to victims of natural disaster or illness.[9] In 2005 Chan created the Dragon's Heart Foundation to help children and the elderly in remote areas of China by building schools, providing books, fees, and uniforms for children; the organisation expanded its reach to Europe in 2011.[162][163] The foundation also provides for the elderly with donations of warm clothing, wheelchairs, and other items. 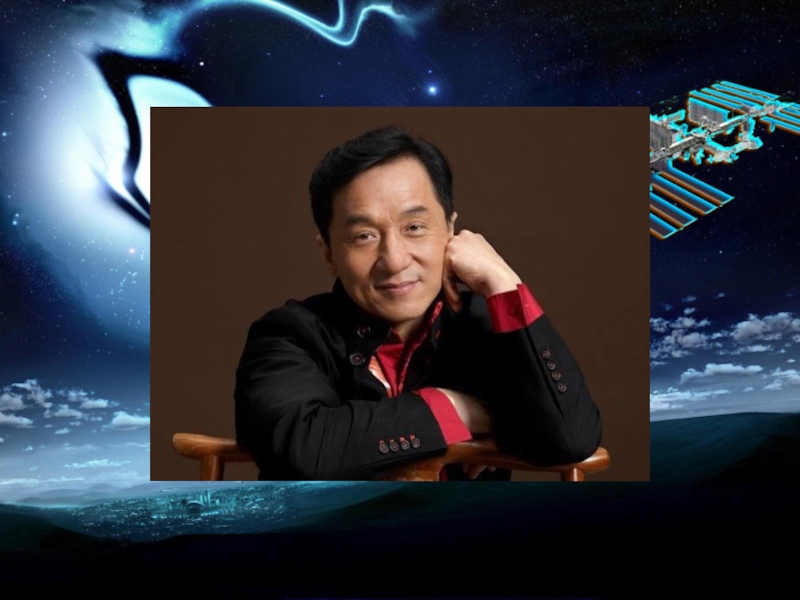 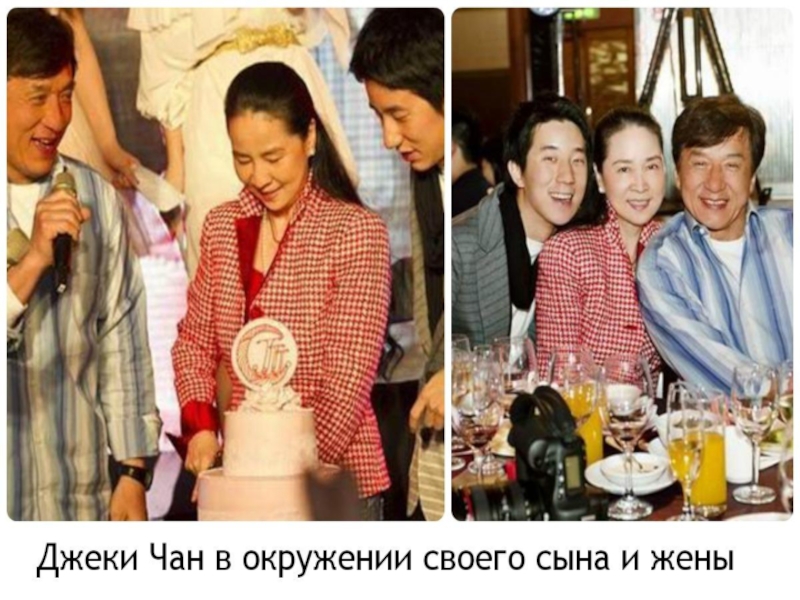 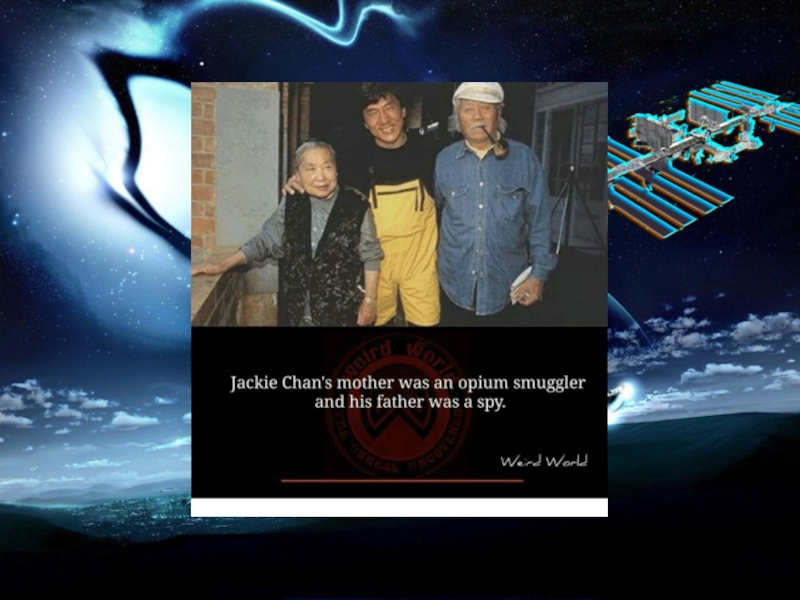