Music in our life
Made 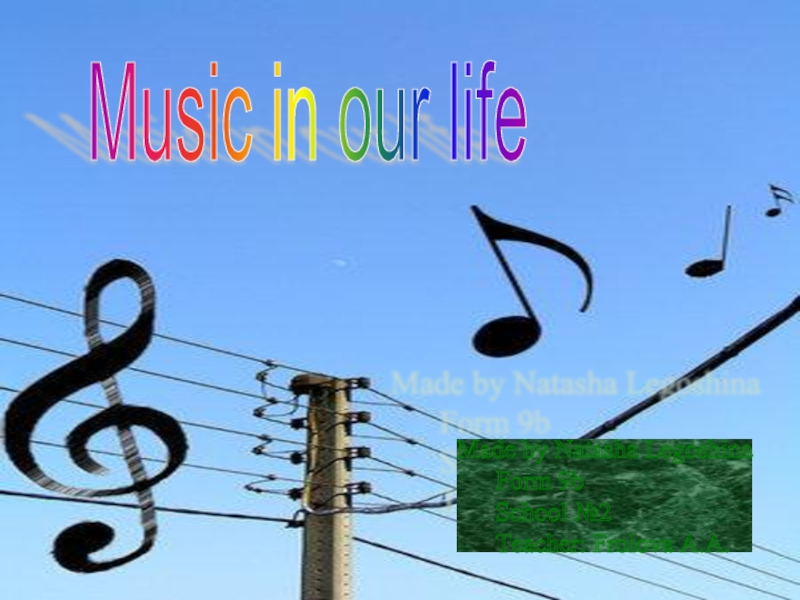 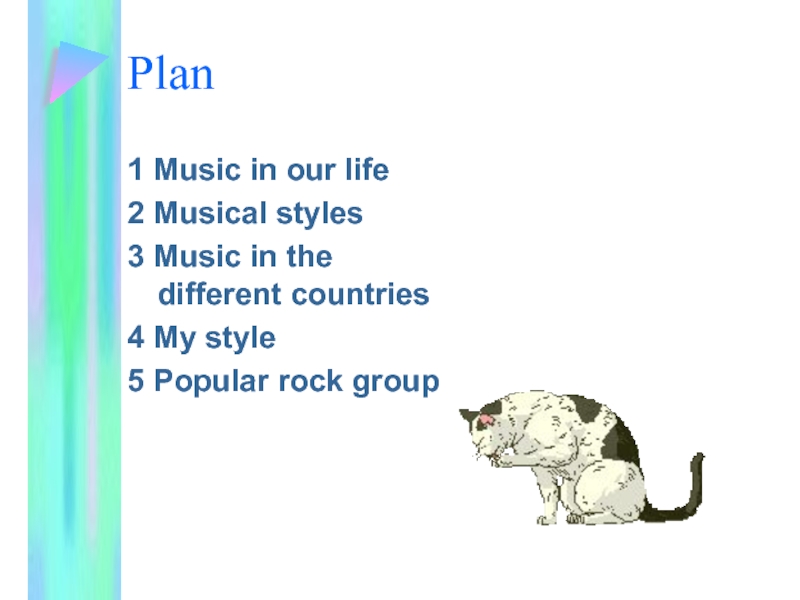 Слайд 3
It is difficult to live without music.We hear music everywhere

: in the streets,at home,over the radio and on TV,in the shops, in the parks and in the concert halls, at the seaside,sometimes in the forest.
We can t live without music/We like to listen to music,we enjoy to dance to music,we plai musical instruments.
A music lesson is one of the favourite subjects at school.
The teacher of music tells the pupils about famous composers and teaches them to sing songs.Pupils preparate concerts for school holidays,learn new songs,play different musical instruments.
Some people are interested in music very much.Children can learn at music schools if they are capable and fond of music.They study there for seven years.
Music is a combination of many sounds.They are short and iong,weak and strong.
Music reflects people s mood and emotions. 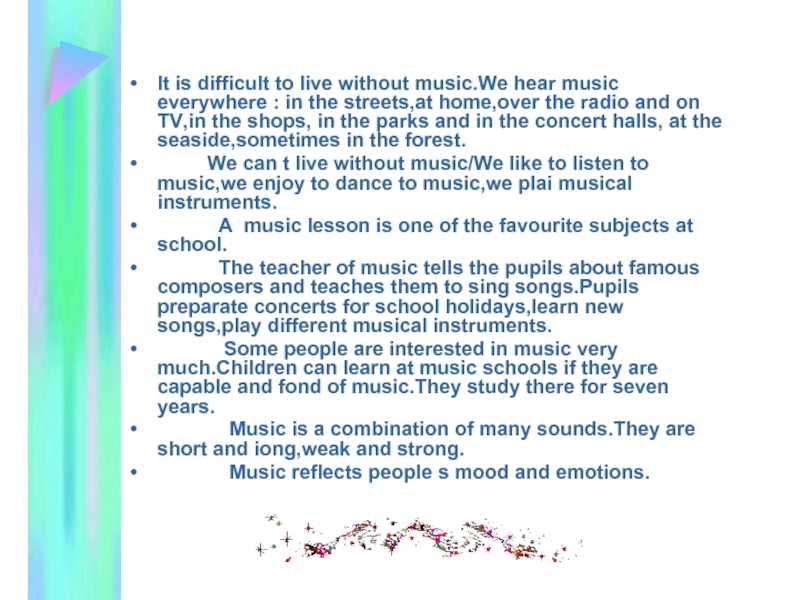 has marked blossoming to the popular music which has taken for a basis dance. This style has appeared from sounding early funk and disco XIX years where the rhythm, first of all, was emphasized, it was more important than the executor and a song. 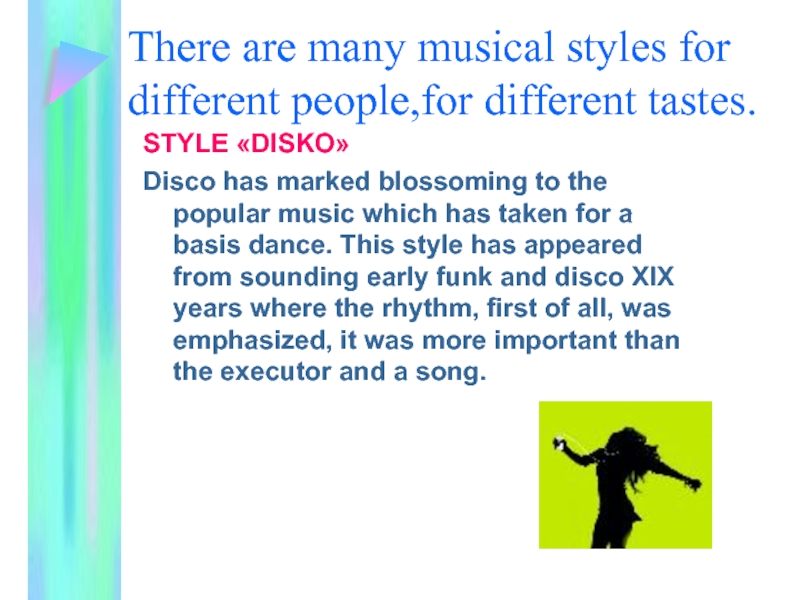 Detroit in the middle of 80th years. There, where house till now has obvious communication with disco, even then, when this style was completely mechanical, the direction techno always concerned to strictly electronic music intended specially for a certain small audience. 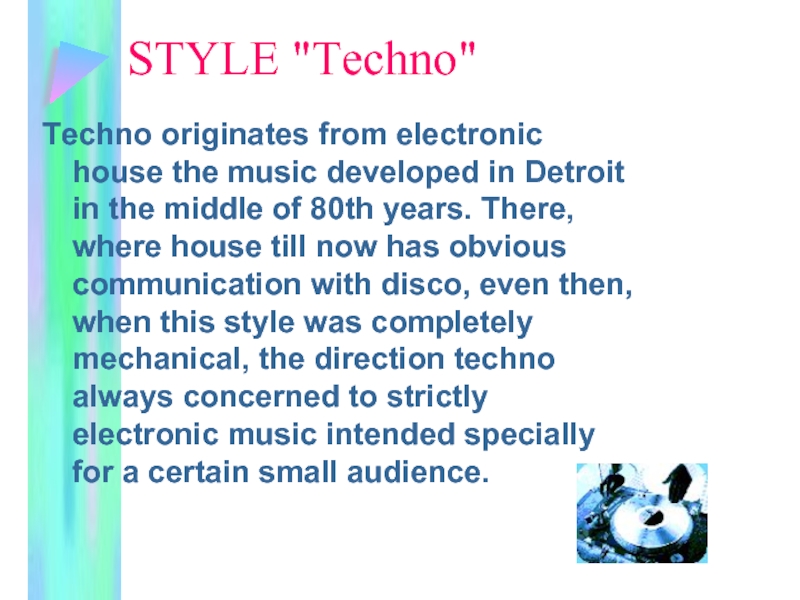 experiments with synthesis of electronic music, such musicians as Brian Eno and Kraftwerk and dancing trance techno in 80th years of 20 centuries. 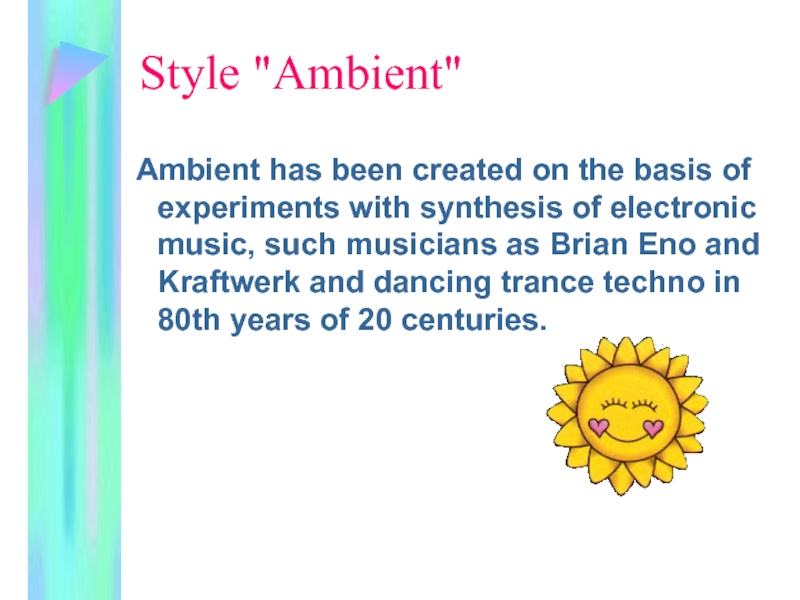 MUSIC IN THE DIFFERENT COUNTRIES 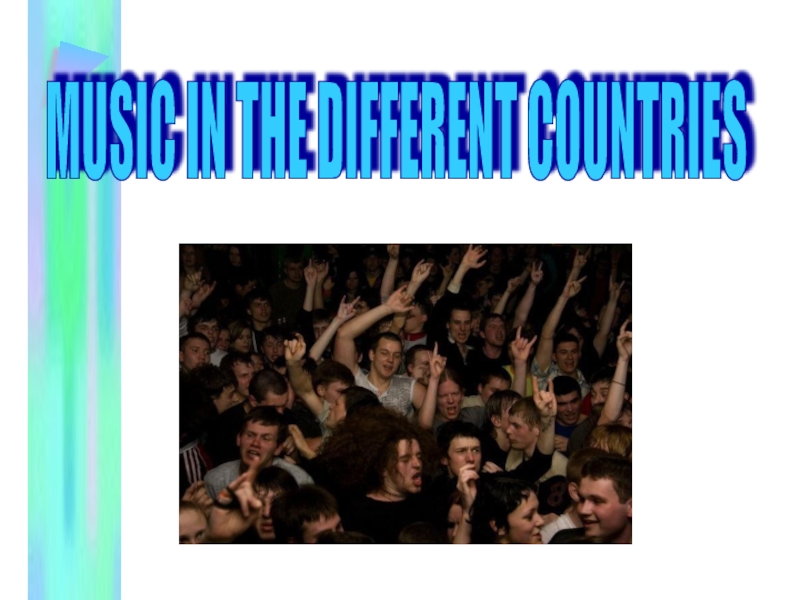 Larry Sitsky
Larry Sitsky occupies an important place in contemporary music in Australia as a composer,pianist,musicologist,
teacher,lecturer and broadcaster.Born in Tianjin(Tientsin),China of Russia-Jewish parents,he began his studies at a very earli age and by the age of 11 had given his first recital and begun nis composing career.
In 1951,Sitsky came to Australia with his parents and was granted a scholarship to the New South Wales Conservatorium of Musik,where he studied piano and composition,graduating in 1955.In 1959 he won a scholarship to the San Francisco Conservatory,where he studied for two years.In 1966 he was appointed Head of Keyboard Studies at the Canberra School of Music and later the Head of Musicology and hte Head of Composition Studies. 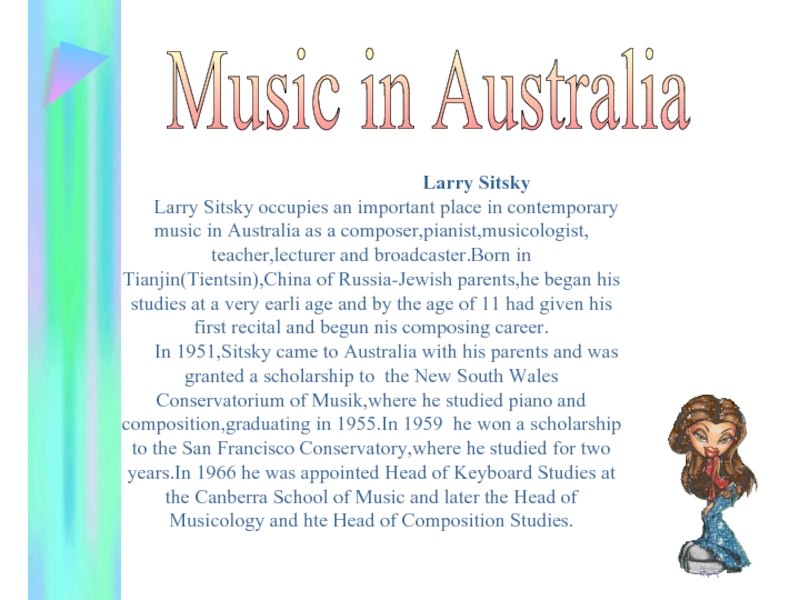 Слайд 9
If you ever did a musical tour of Britain,

you might get some surprises.Electric guitarists and pop singers are not hte only musicians to be heard.There are many strong,local traditions of music still very much alive today.
Let s start in the north,in Scotland.The national instrument is the bagpipes.Not everyone likes the sound it makes,but to the Scots,bagpipe musik is the most exciting in the world.For centuries,up to the First World War,Scottish pipers led hte soldiers into battle,played for hteir royal masters,and at weddings and funerals.The bagpipers are still very popular,and every town has a pipe band.
South over the Border,into the north of England,we come to the land of the brass band.This is the country of factories and coal mines,many of which have their own bands.Some of there are incredibly good. The Grimethorpe Colliery Band,for example,is internationally famous.The bands have an annual competition and Britain s best classical composers write music especially for them.
Let s go south again,to central an southern England.Music is always to be found in the village church,where the choir sings the old hymns which every schoolchild learns.Here also,in the pub,you may meet a singer of old folk songs, or a troupe of dancing Morris men.
But now we must go west, for we will find the best choral music in Wales.The Welsh have always been famous for their singin.Even before the Romans came,2,000 years ago,their «bards» were known to the ancient world.They still meet every year at the «Eisteddfod», a Welsh competition.Now their «male voice choirs» are very popular, with their special rich,strong sound.
London,like all the great cities of Britain,has a long tradition of clasical music.Every night English and international musicians perform in the concert halls and opera houses.London is one of the great classical mysic centres of the world.
Our music tour is over, and it s time to catch our plane home.But in the London underground we ll pass some young «buskers»,sinding or playing a guitar or a flute.They look modern enough,but don t be mistaken.People like them have been playing in the streets of Britain ever since history began. 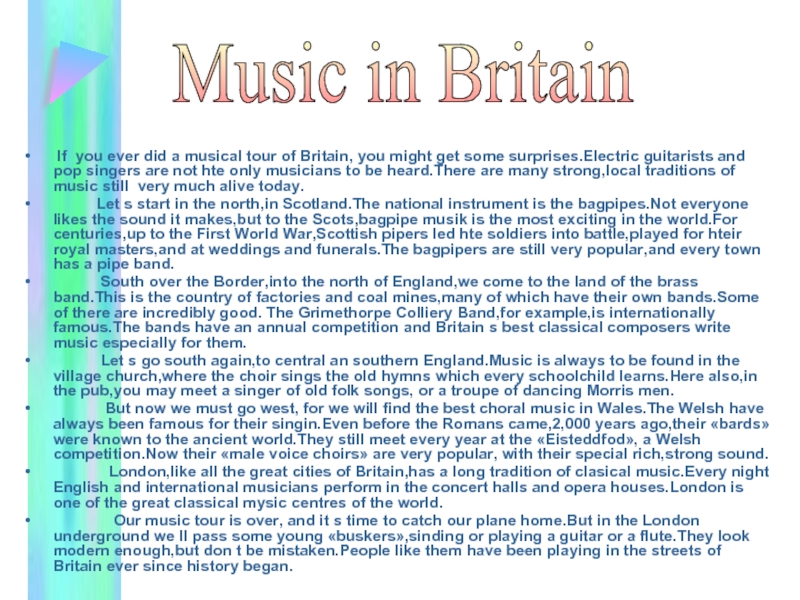 Слайд 10My favourite music style is rock.
Rock it not simply musical direction,

is youth culture, means of dialogue of youth, a mirror of a society. It was initially created as a way of self-expression of youth, revolt and the protest, denying and revision moral and material assets of the world. During all history, the fate shows unsoluble eternal problem fathers and children. As means of self-expression of young generation, fate in opinion of the senior generation looks only as the children's entertainment sometimes dangerous and fatal. Though the fate exists enough for a long time, on it has grown Today adult generation, but nevertheless before it today there are same problems, as well as in the beginning its ways: misunderstanding and отвержение. This circumstance well shows Validity developments: as though we did not develop, we pass stages which have already remained in history. 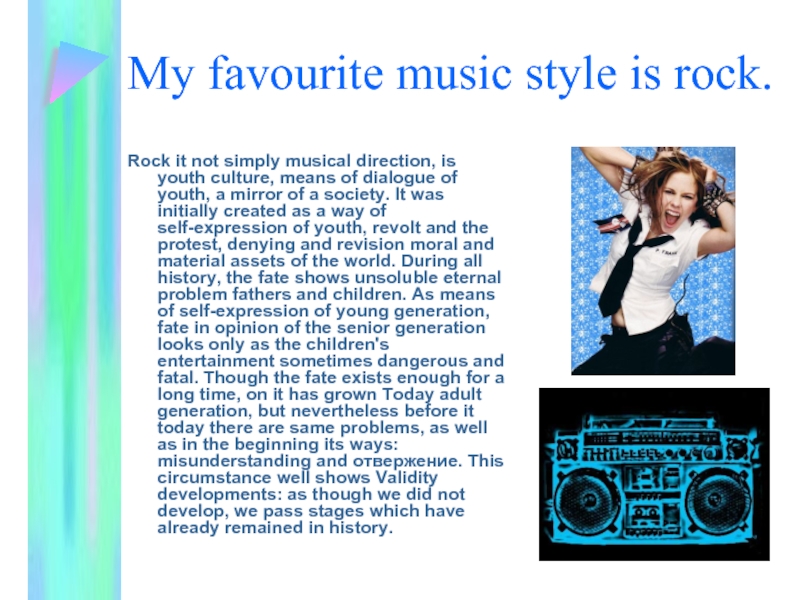 Слайд 11
Music is an important rock of our life. Each man’s

life begins with the mother’s lullaby which calms him down by its hypnotising rhythm and introduces him to the beauty of the world. Since this first introduction man’s life is ever surrounded by musical sounds and melodies. 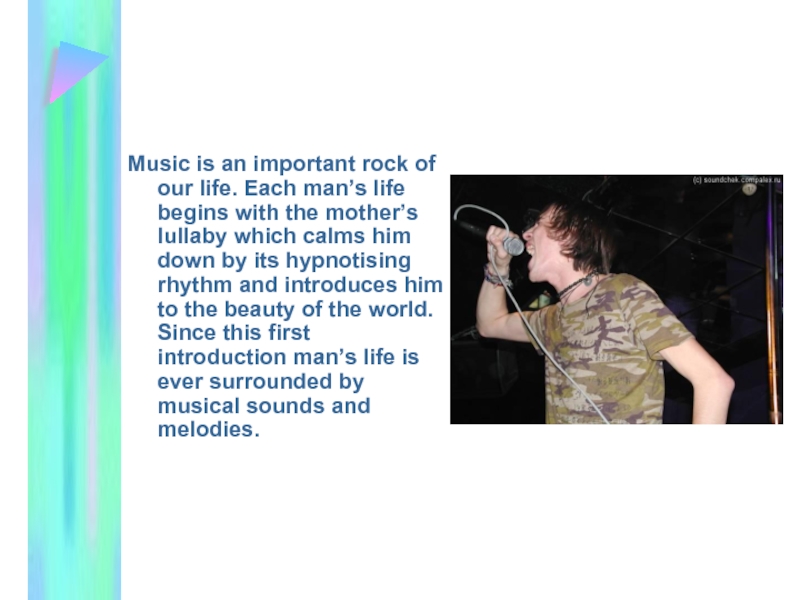 Слайд 12
The rock is very popular today. It such groups as

sing the Lumen, King and the Clown, all known group The Beatles, The Rolling Stones, The Tokio Hotel, Avril Lavigne 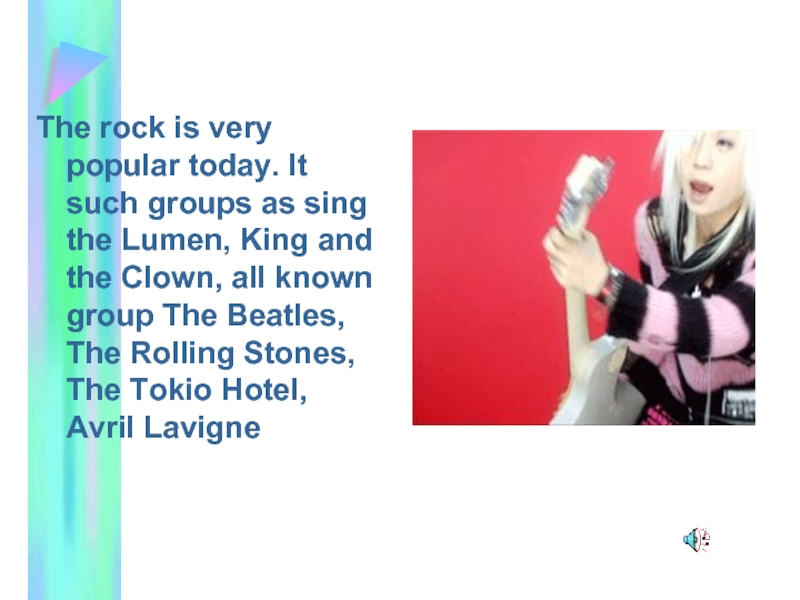 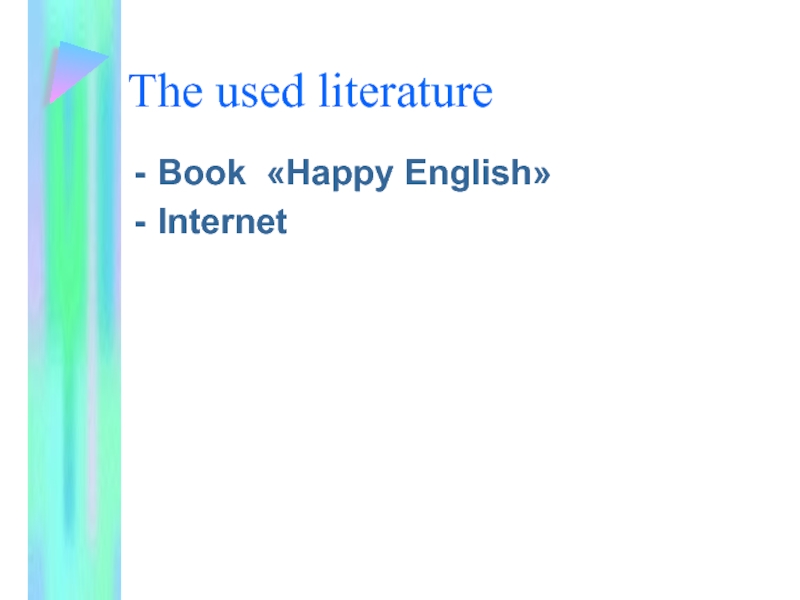 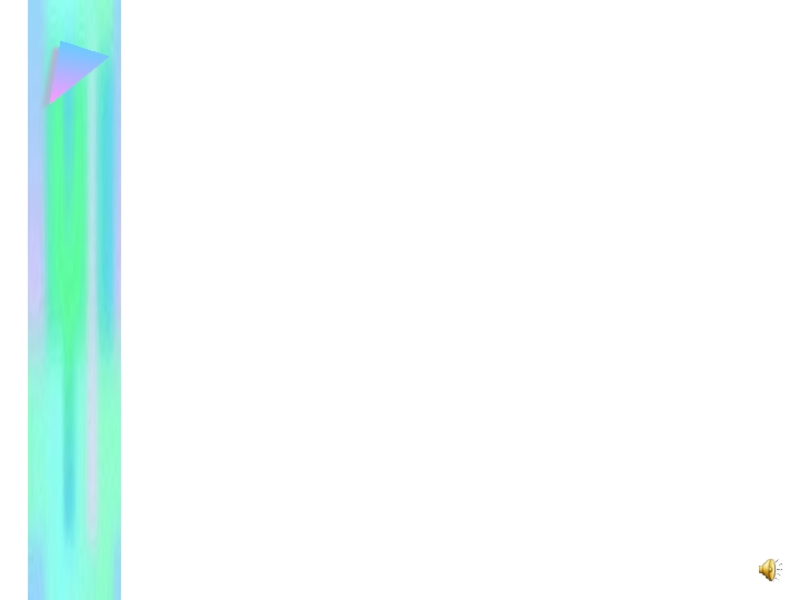 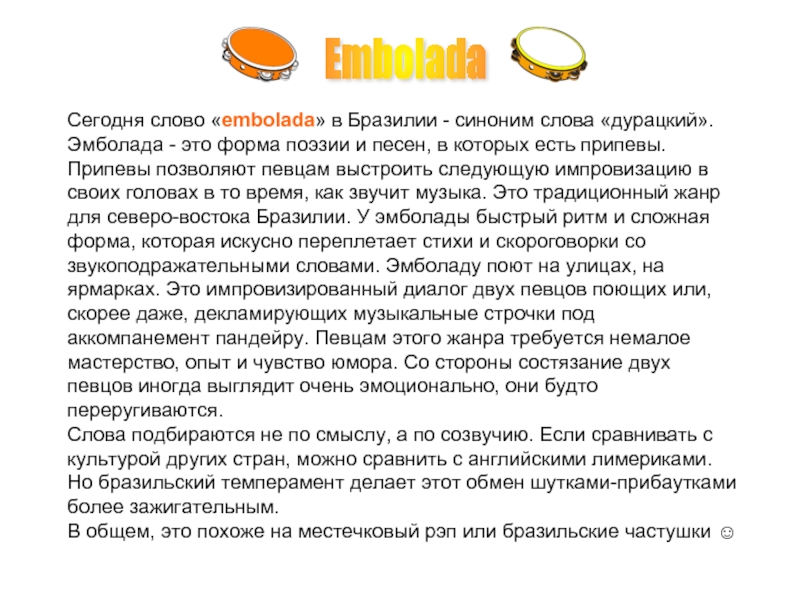 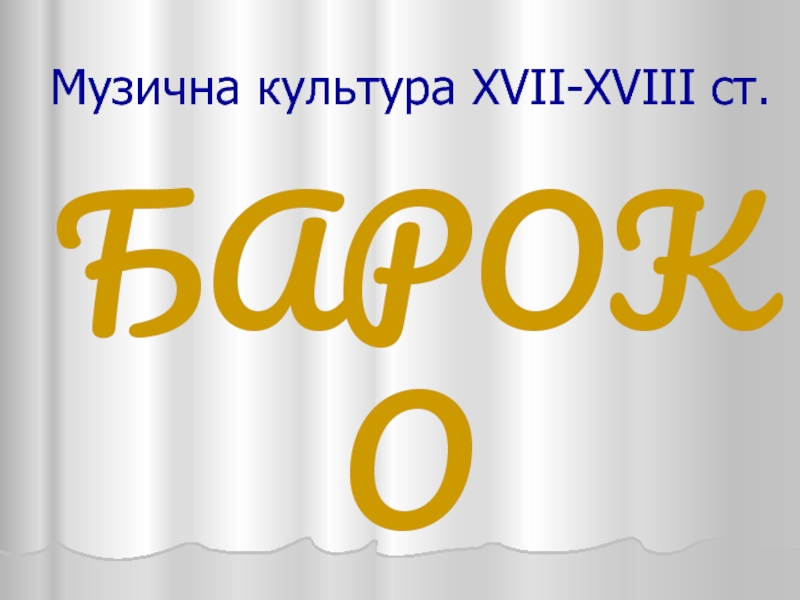 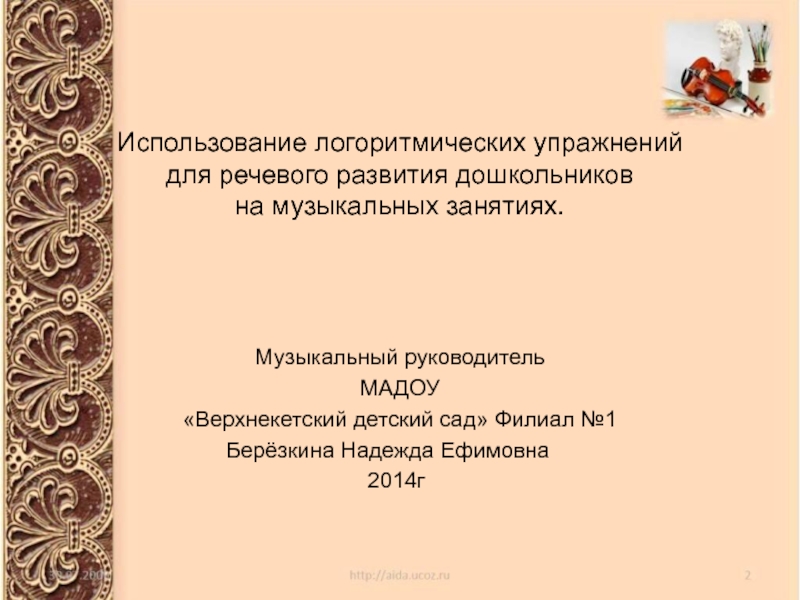 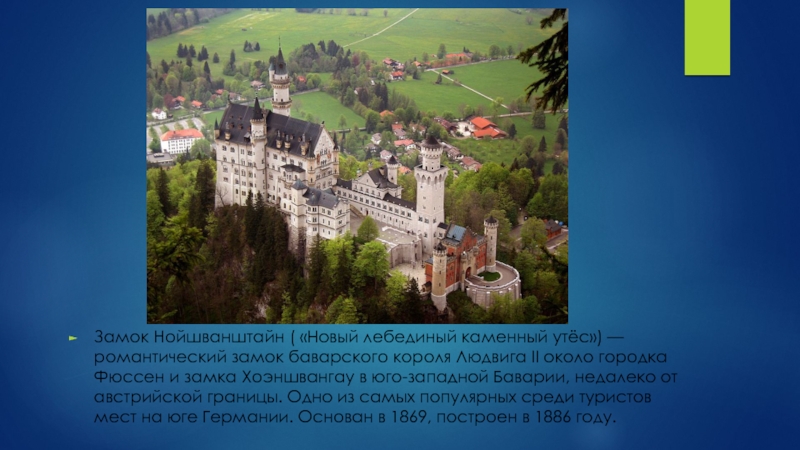 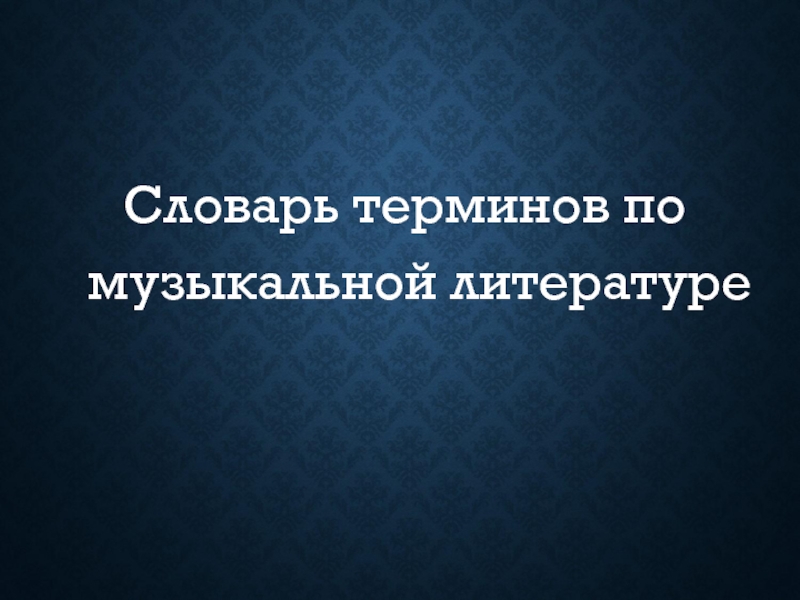 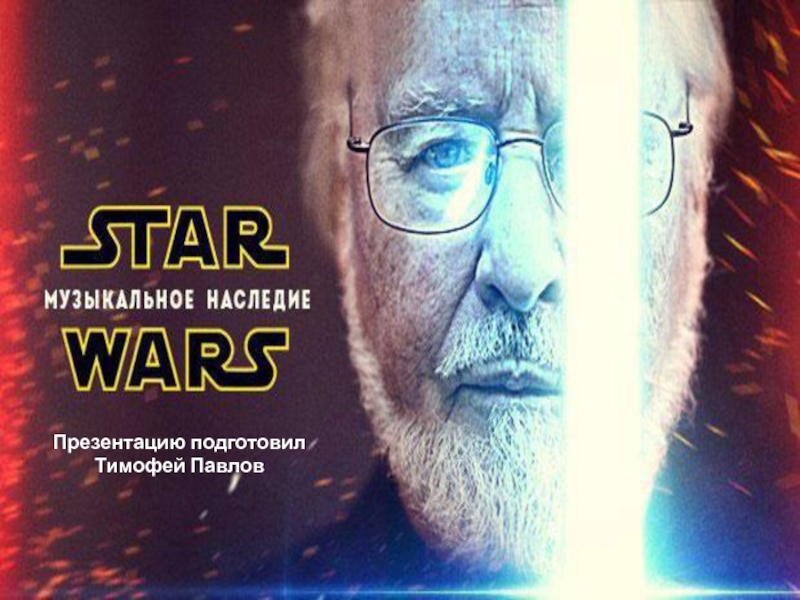