Tinkering in the womb: fetal surgery

The aim of research:
I based my research on studying different cases of serious children problems that can't wait to be fixed after birth.

The actuality:
Unfortunately in our days many diseases become younger and younger .Even unborn child has a risk. For parents it’s immensely hard to understand that the condition of their desired child cannot await therapy until after birth. Fetal surgery allows doctors to intervene earlier. Today, fetal therapy is recognized as one of the most promising fields in pediatric medicine, and prenatal surgery is becoming an option for a growing number of babies with birth defects.

HOW DOES PRENATAL SURGERY WORK?

The most common types are:

Fetal image-guided surgery is done without an incision to the uterus or use of an endoscope. Doctors use ultrasound to guide them as they perform "fetal manipulations," such as placing a catheter in the bladder, abdomen, or chest. The least-invasive form of fetal surgery, it's not used for serious conditions that require open surgery.

Operating on a baby before birth may seem like science fiction, but prenatal surgery is becoming more and more common in special pediatric programs.

In this type of procedure, the mother is given anesthesia. The fetus is also given medications as needed for pain control and to prevent movement. Then the surgeon makes an incision in the lower abdomen to access the uterus.

The uterus is opened with a special stapling device that prevents bleeding and membrane separation, the fetus is either partially or completely taken out of the womb, warmed fluids are continuously infused into the uterus to keep the amniotic fluid level safe for the mother and baby. Surgery is done, then the baby is returned to the uterus, and the incision is closed.

Open fetal surgery may be used for several conditions: 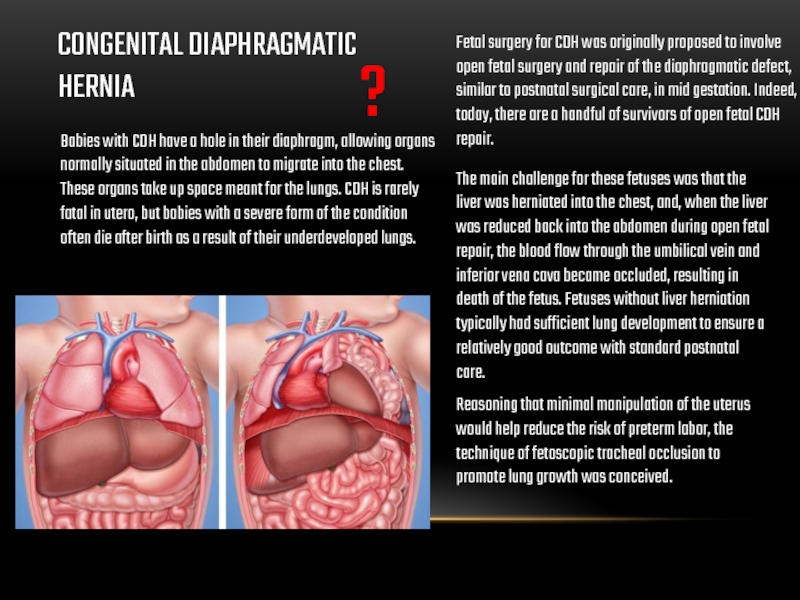 Fetal surgery for CDH was originally proposed to involve open fetal surgery and repair of the diaphragmatic defect, similar to postnatal surgical care, in mid gestation. Indeed, today, there are a handful of survivors of open fetal CDH repair.

Babies with CDH have a hole in their diaphragm, allowing organs normally situated in the abdomen to migrate into the chest. These organs take up space meant for the lungs. CDH is rarely fatal in utero, but babies with a severe form of the condition often die after birth as a result of their underdeveloped lungs.

The main challenge for these fetuses was that the liver was herniated into the chest, and, when the liver was reduced back into the abdomen during open fetal repair, the blood flow through the umbilical vein and inferior vena cava became occluded, resulting in death of the fetus. Fetuses without liver herniation typically had sufficient lung development to ensure a relatively good outcome with standard postnatal care.

Reasoning that minimal manipulation of the uterus would help reduce the risk of preterm labor, the technique of fetoscopic tracheal occlusion to promote lung growth was conceived.

Fetoscopic surgery is much less invasive than open fetal surgery, thus decreasing the risk of preterm labor. Mothers are given anesthesia during the procedure to help with pain control and anxiety. The fetus is also given medication to decrease movement and prevent pain.

Surgery is most useful for:
problems with the placenta, such as twin-twin transfusion syndrome in which one identical twin grows at the expense of the other because of abnormal blood vessel connections in the placenta they share.

Stem cell therapies hold particular promise, according to some researchers. By providing therapy in utero, doctors have a better chance of treating a disease before debilitating symptoms appear. In addition, the fetus has a poorly developed immune system, so it is more likely to accept foreign cells. Lastly, because of the fetus's small size, relatively high doses of cells can be delivered, making the therapy more likely to succeed.

When doctors began performing open surgery, in the early 1980s, most of the fetuses died. Some physicians were critical of the attempts. They argued that a healthy woman was put at risk in order to attempt the rescue of a fetus that would most likely die anyway. Others supported the experimental surgery and declared that this was the fetus's only chance.

Today fetal reduction, the systematic killing of one or more fetuses in order to save those remaining, also raises ethical issues. Treating a fetus as a patient creates a situation that has never before existed.

In the past, experimental treatments for the seriously ill could be justified on the grounds that the patient had everything to gain and nothing to lose. With fetal surgery, that may hold true for the fetus, of course, but the benefits and risks to the mother are far less obvious.

Many mothers are willing to do whatever is necessary to give birth to a healthy baby. Yet major abdominal surgery and general anesthesia pose risks to the mother. The regimen she must follow after surgery is uncomfortable. Furthermore, the success rate for some surgeries is quite low. Most types of fetal surgery must be approved by a hospital ethics review board.

Research studies have shown that fetal surgery does not interfere with a woman's future fertility. Still, ethicists argue that a woman must always have the freedom to choose against fetal surgery. They fear that as the procedures gain acceptance and it proves more successful, women will find it increasingly difficult to say no. They also worry that a judge might order a woman to have fetal surgery against her will. Legal precedent already exists for this kind of dispute between mother and fetus. Pregnant women have been ordered to have unwanted cesarean sections after medical authorities testified that the operation was in the best interest of the unborn baby.

A major risk of prenatal surgery is nicking the placenta, causing blood hemorrhaging, uterine contractions, and birth of a premature infant who may not survive. Preterm labor is the most common complication of prenatal surgery. Fetoscopic surgeries are less dangerous and traumatic than open fetal surgery and reduce the risk of premature labor. Subsequent children of a mother who has undergone fetal surgery usually are delivered by cesarean section because of scarring of the uterus.

Other risks to the mother include:
extensive blood loss
complications from general anesthesia
side effects, potentially fatal, from medications to control premature labor
rupturing of the uterine incision
infection of the wound or uterus
psychological stress
inability to have additional children death

About 25 % of women undergoing prenatal surgery lose some amniotic ﬂuid, often because of leakage at the uterine incision. Amniotic ﬂuid is essential for lung development and protects the fetus from injury and infection. If all of the amniotic fluid is lost. the fetal lungs may not develop properly. Without the cushion that enables the fetus to ﬂoat, the fetus may compress the umbilical cord causing death.

Other risks to the fetus include:
birth during surgery
membrane separation between the tissues surrounding the amniotic ﬂuid sac and the uterus, causing early delivery or interference with blood flow to some fetal body part such as an arm or leg
further damage to the spinal cord and nerves during prenatal surgery for spina bifida intrauterine infection requiring immediate birth of the fetus
brain damage
physical deformities
death. 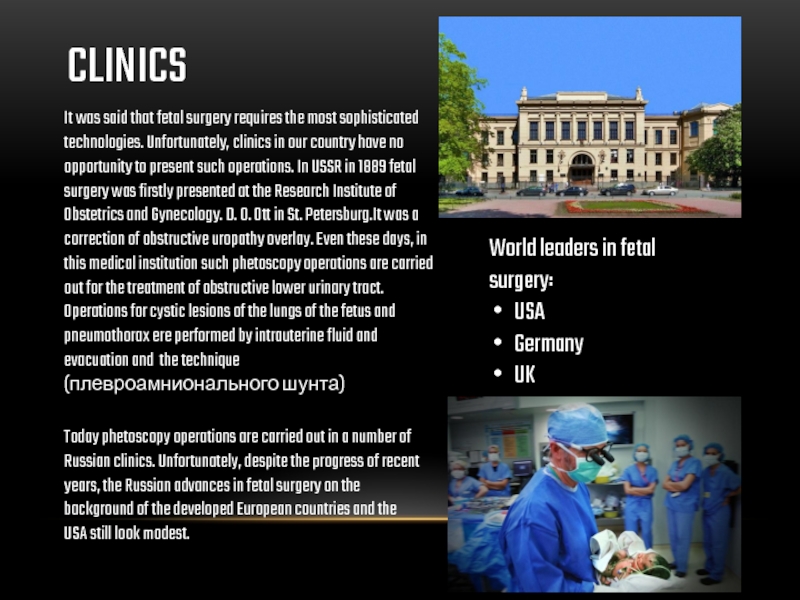 It was said that fetal surgery requires the most sophisticated technologies. Unfortunately, clinics in our country have no opportunity to present such operations. In USSR in 1889 fetal surgery was firstly presented at the Research Institute of Obstetrics and Gynecology. D. O. Ott in St. Petersburg.It was a correction of obstructive uropathy overlay. Even these days, in this medical institution such phetoscopy operations are carried out for the treatment of obstructive lower urinary tract. Operations for cystic lesions of the lungs of the fetus and pneumothorax ere performed by intrauterine fluid and evacuation and the technique (плевроамнионального шунта)

Today phetoscopy operations are carried out in a number of Russian clinics. Unfortunately, despite the progress of recent years, the Russian advances in fetal surgery on the background of the developed European countries and the USA still look modest. 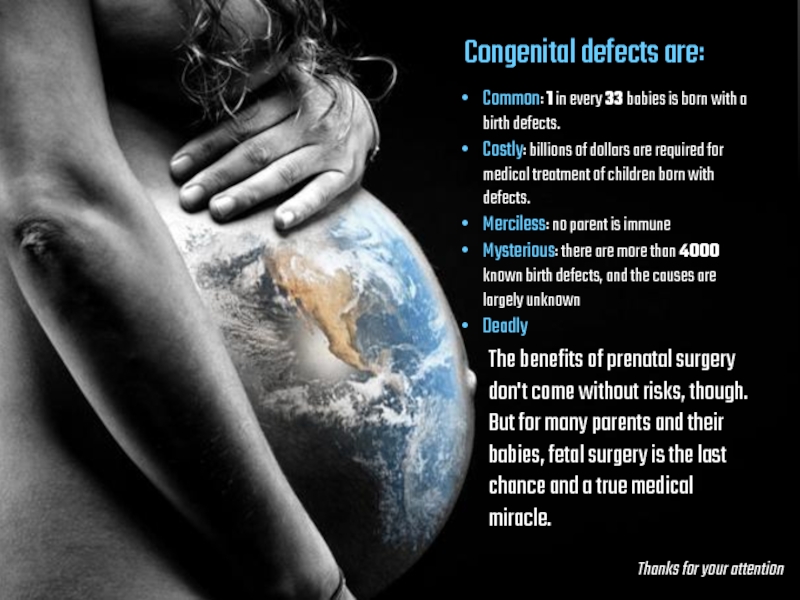 Common: 1 in every 33 babies is born with a birth defects.
Costly: billions of dollars are required for medical treatment of children born with defects.
Merciless: no parent is immune
Mysterious: there are more than 4000 known birth defects, and the causes are largely unknown
Deadly

The benefits of prenatal surgery don't come without risks, though. But for many parents and their babies, fetal surgery is the last chance and a true medical miracle.

Thanks for your attention