Tendency and specialties of separate kinds of morbidity
in different regions of world, countries

Morbidity has been defined as “any departure, subjective or objective, from a state of physiological well being”.
The WHO Expert committee on Health Statistics noted in its 6th report that morbidity could be measured in terms of 3 units
a. person who ill;
b. the illness that these persons experienced
c. the duration of these illness.

Of 56 million global deaths in 2012, 38 million, or 68%, were due to no communicable diseases (NCDs). The four main NCDs are cardiovascular diseases, cancers, diabetes and chronic lung diseases. The burden of these diseases is rising disproportionately among lower income countries and populations. In 2012, nearly three quarters of no communicable disease deaths -- 28 million -- occurred in low- and middle-income countries with about 48% of deaths occurring before the age of 70 in these countries.
The leading causes of NCD deaths in 2012 were cardiovascular diseases (17.5 million deaths, or 46% of all NCD deaths), cancers (8.2 million, or 22% of all NCD deaths), and respiratory diseases, including asthma and chronic obstructive pulmonary disease (4.0 million). Diabetes caused another 1.5 million deaths.

WHO has consolidated tools for countries in a framework known as the national cancer control program, which focuses government attention and services on all facets of the fight.
A national cancer control program is a public health program designed to reduce cancer incidence and mortality and improve cancer patients’ quality of life, through the systematic and equitable implementation of evidence-based strategies for prevention, early detection, diagnosis, treatment and palliation, making the best use of available resources.

80% of diabetes deaths occur in low- and middle-income countries.
In developed countries most people with diabetes are above the age of retirement, whereas in developing countries those most frequently affected are aged between 35 and 64. 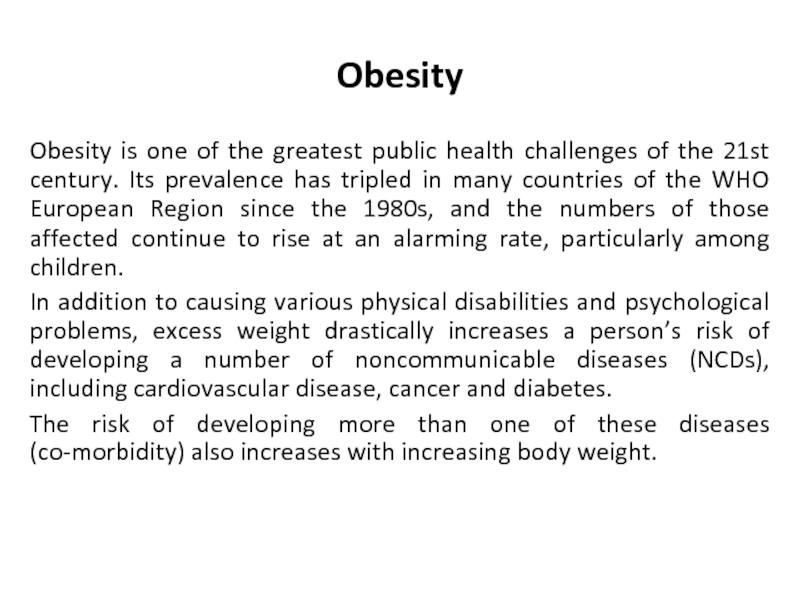 Obesity is one of the greatest public health challenges of the 21st century. Its prevalence has tripled in many countries of the WHO European Region since the 1980s, and the numbers of those affected continue to rise at an alarming rate, particularly among children.
In addition to causing various physical disabilities and psychological problems, excess weight drastically increases a person’s risk of developing a number of noncommunicable diseases (NCDs), including cardiovascular disease, cancer and diabetes.
The risk of developing more than one of these diseases (co-morbidity) also increases with increasing body weight.

About 30% of people dying from NCDs in low- and middle-income countries are aged under 60 years and are in their most productive period of life.
The prevalence of NCDs is rising rapidly and is projected to cause almost three-quarters as many deaths as communicable, maternal, perinatal, and nutritional diseases by 2020, and to exceed them as the most common causes of death by 2030.
In most middle- and high-income countries NCDs were responsible for more deaths than all other causes of death combined, with almost all high-income countries reporting the proportion of NCD deaths to total deaths to be more than 70%.

No communicable diseases: Current status and trends in risk factors

Common, preventable risk factors underlie most NCDs. These risk factors are a leading cause of the death and disability burden in nearly all countries, regardless of economic development.
The leading risk factor globally for mortality is:
raised blood pressure (responsible for 13% of deaths globally),
followed by tobacco use (9%),
raised blood glucose (6%),
physical inactivity (6%),
overweight and obesity (5%).

No communicable diseases: Current status and trends in risk factors

No communicable diseases: parameters for estimation of behavioral and metabolic risk factors

UN General Assembly adopt of the political declaration on the prevention and control of no communicable diseases. For the first time, global leaders have reached consensus in the General Assembly on concrete actions to tackle these diseases.
Governments agreed on the need for global targets to monitor these diseases and their risk factors like tobacco use, unhealthy diet, physical inactivity and the harmful use of alcohol.

Morbidity and mortality shifting from infectious to chronic diseases across the world.
Chronic diseases will be most common cause of death within 25 years in all countries of the world
Heart Disease
Stroke
Cancer
Chronic Respiratory Disease
Diabetes

Globalization, urbanization, population growth, and aging population are major contributors to rise of chronic disease
Poverty and established inequities are a major impediment to effective management of shifting epidemiology
Proven, effective, and inexpensive strategies for prevention of chronic disease are globally available for addressing this issue.