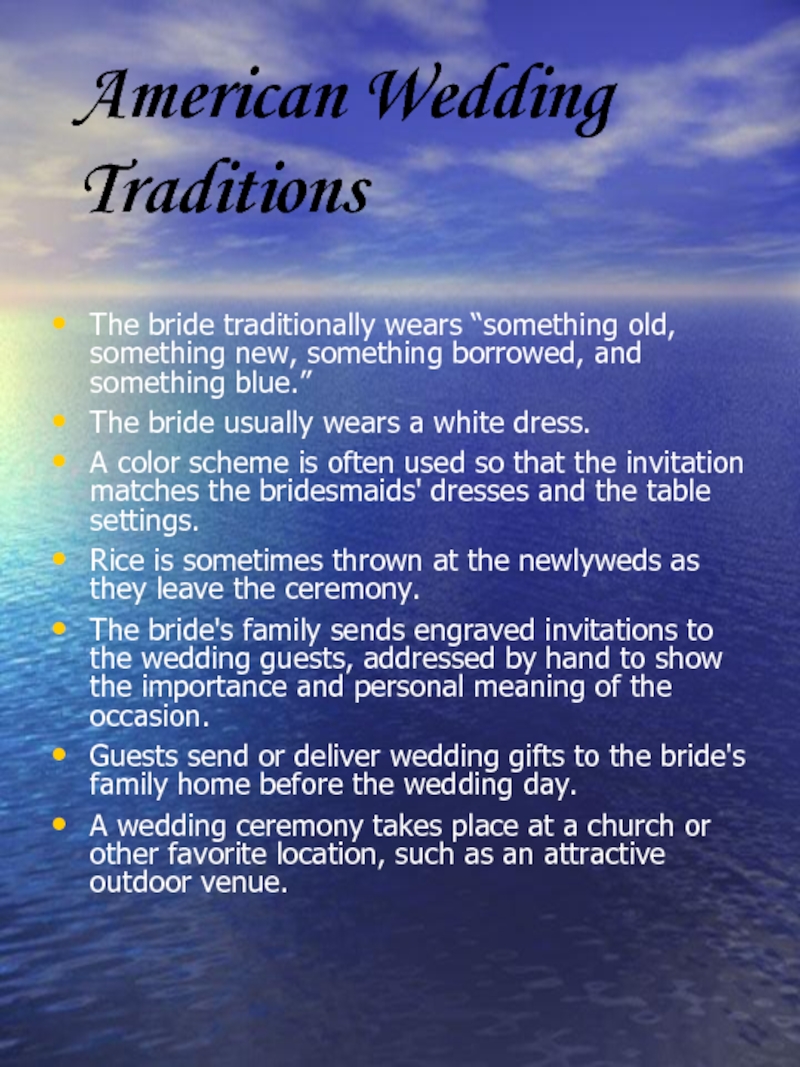 The bride traditionally wears “something old, something new, something borrowed, and something blue.”
The bride usually wears a white dress.
A color scheme is often used so that the invitation matches the bridesmaids' dresses and the table settings.
Rice is sometimes thrown at the newlyweds as they leave the ceremony.
The bride's family sends engraved invitations to the wedding guests, addressed by hand to show the importance and personal meaning of the occasion.
Guests send or deliver wedding gifts to the bride's family home before the wedding day.
A wedding ceremony takes place at a church or other favorite location, such as an attractive outdoor venue.

The wedding cake, mostly a large cake with lots of ornaments, has to be cut by the bride and the groom together. 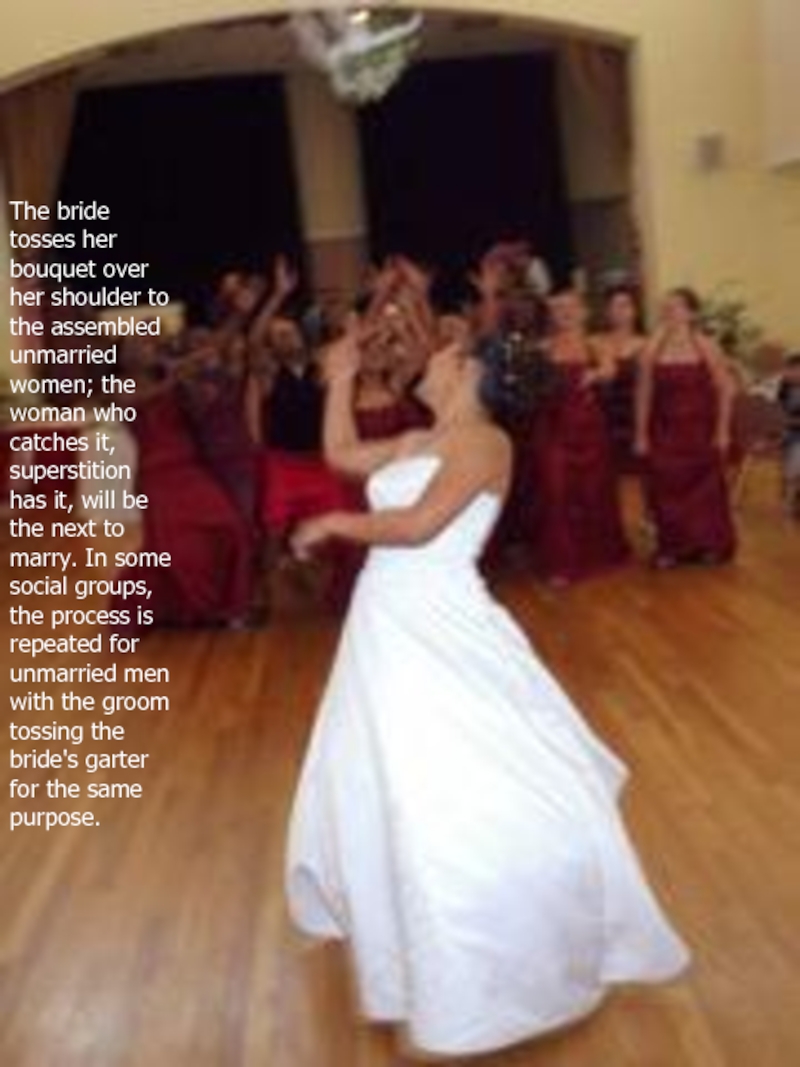 The bride tosses her bouquet over her shoulder to the assembled unmarried women; the woman who catches it, superstition has it, will be the next to marry. In some social groups, the process is repeated for unmarried men with the groom tossing the bride's garter for the same purpose. 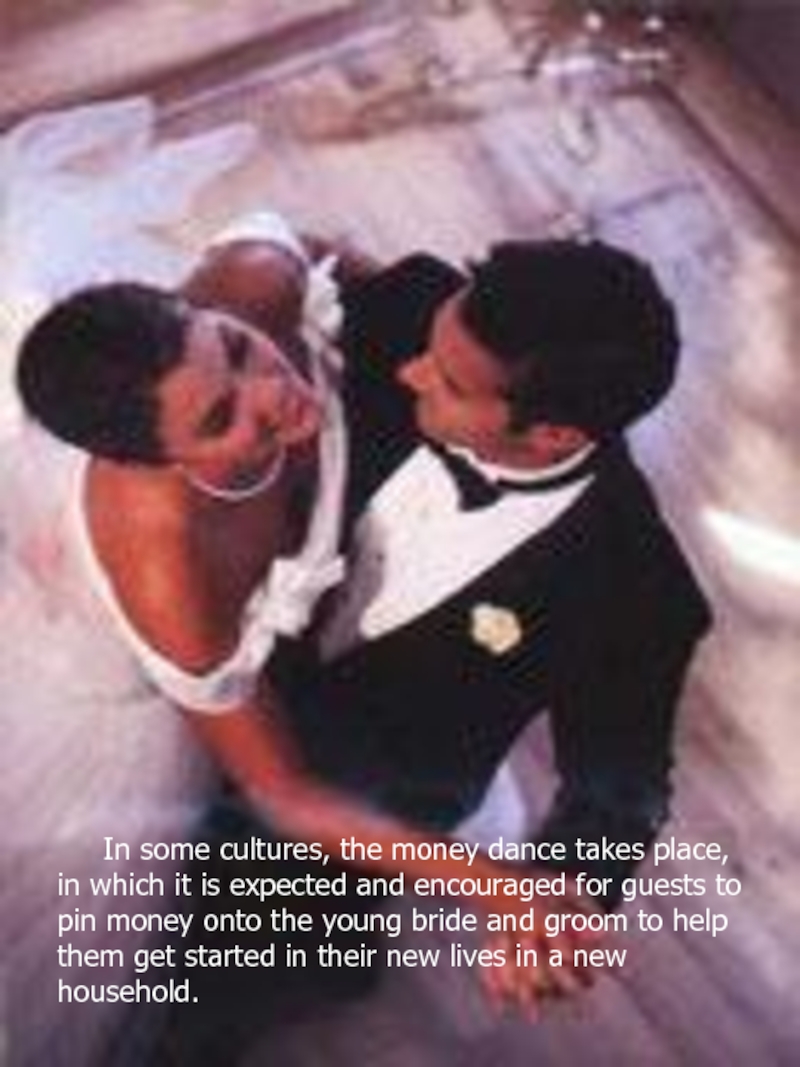 In some cultures, the money dance takes place, in which it is expected and encouraged for guests to pin money onto the young bride and groom to help them get started in their new lives in a new household.

The cake-cutting ceremony takes place; the bride and groom jointly hold a cake cutter and cut the first pieces of the wedding cake.
There is a wedding reception following the ceremony, usually at a different venue.
The bridal party lines up in a receiving line and the wedding guests file past, introducing themselves.
Usually a drink is served while the guests and bridal party mingle. In some cases the drink may be whiskey or wine with a non alcoholic alternative.
The bride's family sends invitations on behalf of the couple to the wedding guests, addressed by hand. The couple may send the invitations themselves, especially if they are more middle-aged. The invites will specify if the invitation is for ceremony and/or reception and/or evening following the meal at the reception.

Before the ceremony, there is a rehearsal. Often during this rehearsal, the bride's mother lowers the veil for her daughter, signifying the last act that a mother can do for her daughter, before giving her away. The father of the bride, much like in Western culture, walks the bride down the aisle to her awaiting groom.
The service, or kekkon shiki, then starts. The service is given either in Japanese or English, or, in some cases, a mix of both. It follows a traditional Protestant ceremony, relaxed and not overtly religious. The opening hymn is usually the Japanese version of What a Friend We Have in Jesus.

Japanese bride and groom, wearing white and black kimonos respectively. The Japanese bride-to-be is painted pure white from head to toe, visibly declaring her maiden status to the gods; a white hood is attached to her kimono, which the bride wears like a veil to hide her 'horns of jealousy' from the groom's mother, who will now become the head of the family.

According to the old tradition a groom arrives with his parents at the house of a bride just before the wedding ceremony.
The Polish bride traditionally wears a white dress and a veil. The groom, on the other hand usually wears an elegant fitted suit with a bow tie and a boutonnière that matches the brides' bouquet.
When they leave the church the guests toss rice or coins at the married couple for good and prosperous future together
The married couple is traditionally welcomed at the reception place by the parents with bread and salt. The bread symbolizes the prosperity, salt stands for hardship of life, the parents wish the young couple that they never go hungry and learn how to deal with every day hardships together.

Once all the guests had showered the couple with kisses,hugs and beautiful flowers everyone heads to the reception. It is a very popular custom in Poland to prepare "passing gates" on the way to the reception for the newlyweds, who in order to pass have to give the "gate keepers" some vodka.

Ransom for the bride. The groom is coming to the bride's home with his closest friends and relatives. To get the bride he has to pay some ransom to the folks on the bride’s side. Everything is played out as a joke and both sides are mostly competing in the sense of humor.
The civil ceremony takes place at the department of public services. At the entry to the registration hall the couple is greeted by the guests with bread and salt. The ceremony is about 15 minutes long and at the end of it the couple exchanges rings.
Russian wedding receptions are very loud and they last for two days or sometimes even longer. They include a lot of Russian music, singing, dancing, long toasts, and the abundance of food and drinks to go with it. The guests love to sing Russian traditional songs to the sounds of accordion, bayan or garmoshka.

After the official part, it is customary for the bride and groom, and some of their close friends and relatives to go on a tour of the historic sites of the city, taking pictures and drinking champagne.

Marriage ceremonies across cultures, even though they can be very different, they share many common aspects. There are at least a few reasons why these similarities exist among so many different cultures of the world. First, marriage is an important emotional and social transition for the bride and groom. Second, marriage often marks a dramatic change in the social status for the newlyweds. In most cultures it signifies adulthood and potential parenthood.

The project is made by: