Introduction CPUs are very impressive but they are actually quite simple when it comes to processing. They can only process 1’s and 0’s. They therefore do not understand 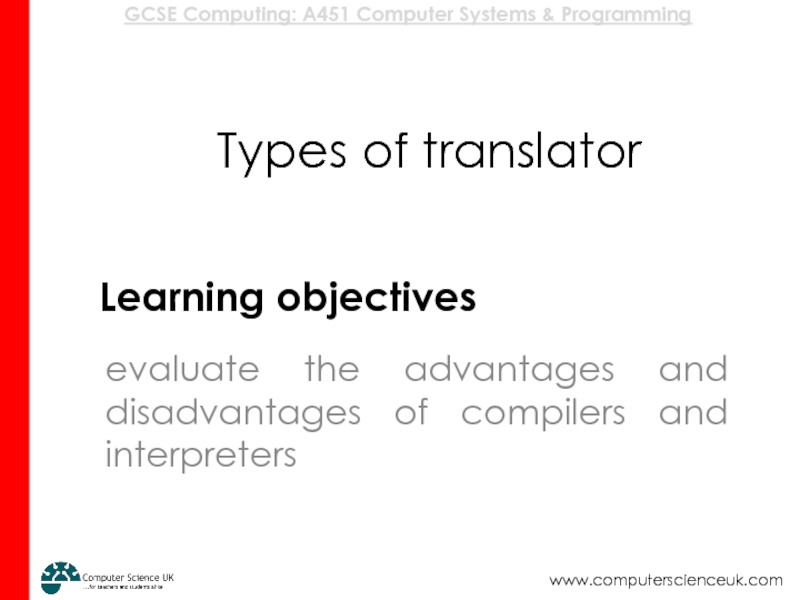 CPUs are very impressive but they are actually quite simple when

it comes to processing.

They therefore do not understand how to process programming code in the form in which we write it .

So what has to happen to get our code into a form that the CPU can work with…? 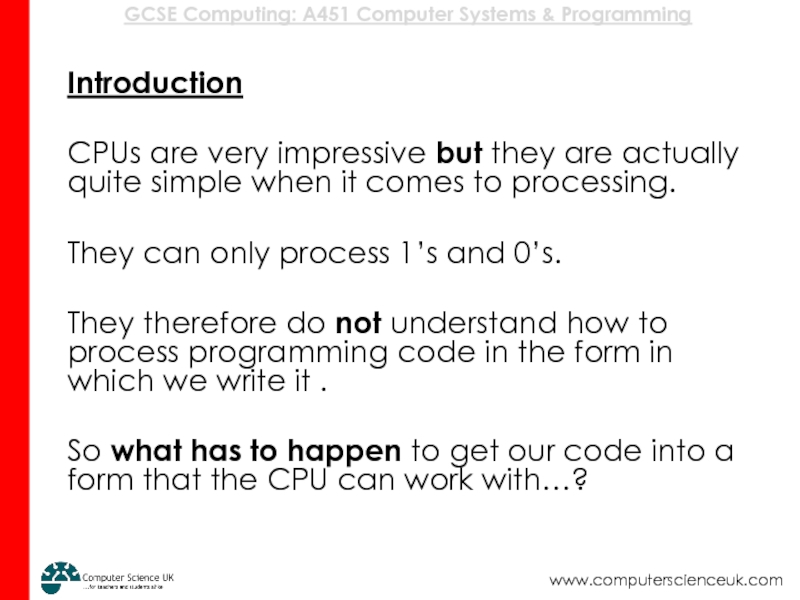 Слайд 3From Our Brain to the CPU… 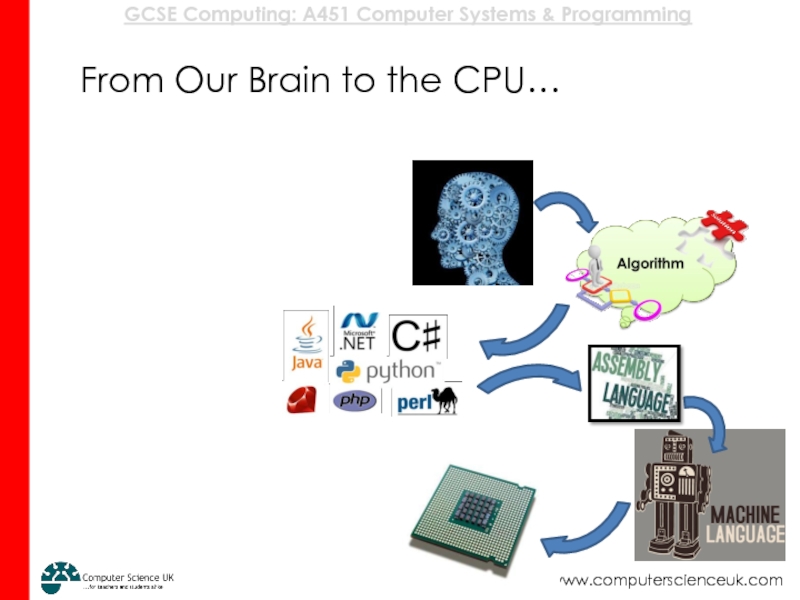 The CPU can only understand one type of code: Machine Code

Made up of Coded Instructions and Data

Each piece of machine code is stored as a binary number and then decoded and executed by the CPU’s logic circuits.

This means that writing programs in ‘Machine Code’ is difficult for a human to do. 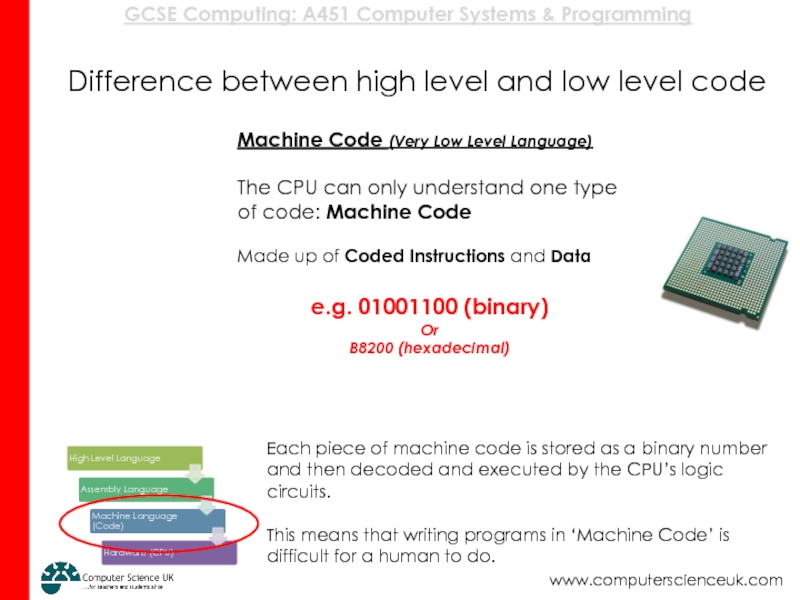 To overcome this issue, assembly language was created.

This helped programmers as they didn’t have to remember sets of binary code, instead they learnt commands.
EG: Instead of memorising what 1011 or 1001 meant, they just had to remember commands like ADD and SUB

These commands are known as Mnemonics (simple memory aids).

Assembly language is still quite difficult to learn and use and this is why High Level Languages were produced.

(Due to less code, assembly language can be processed by the CPU far more quickly than high level languages) 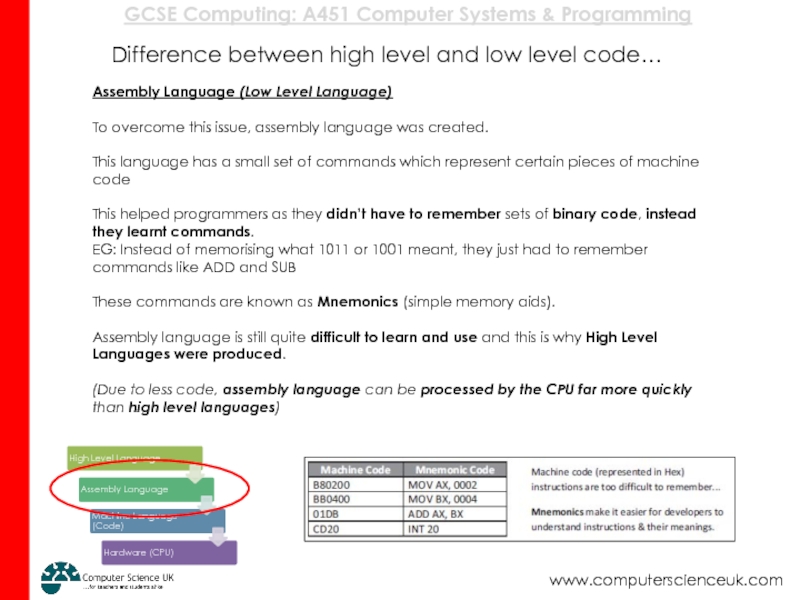 High level code (aka ‘source code’) is far more easy to write and therefore for humans to understand.

Its purpose is to be easier to write AND STILL be easily translated into machine code so that it can be processed by the CPU.

To help it be translated, it makes use of:
KEY WORDS
and
SYNTAX
(rules for the keywords and arguments that go with them)

Using keywords as opposed to any old English means that translations can happen – reserved words such as PRINT are known to translators where as ‘put on screen’ is not etc. 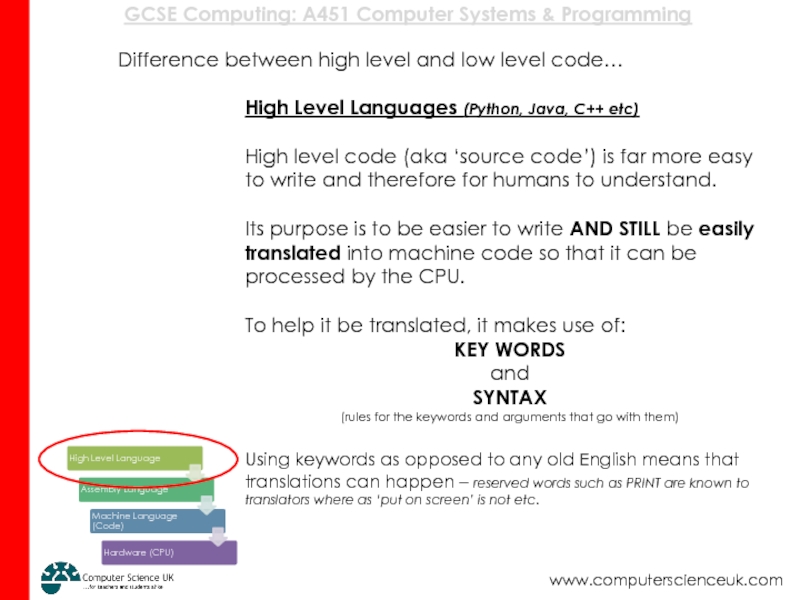 
?
So how does our ‘HUMAN WRITTEN CODE’ get turned into 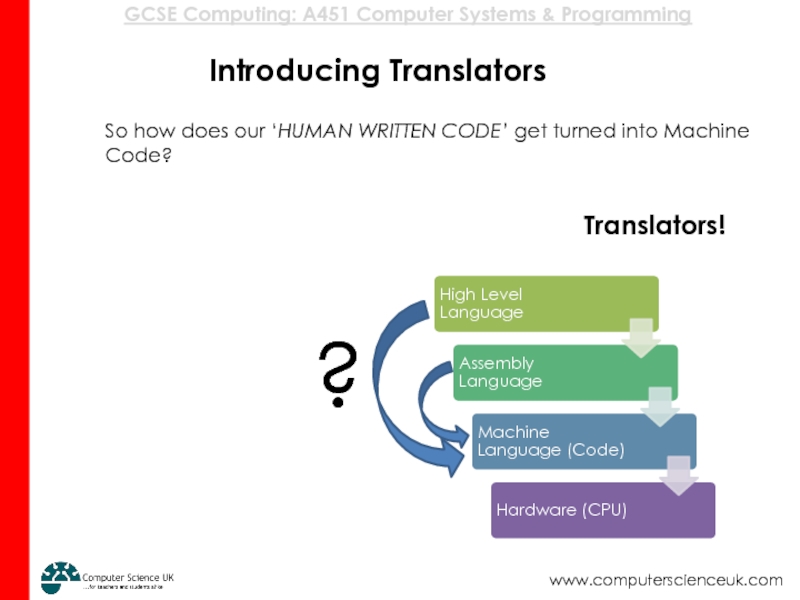 
There are 2 ways in which translators work:

Take the whole code and convert it into machine code before running it (known as compiling).

Take the code one instruction at a time, translate and run the instruction, before translating the next instruction (known as interpreting). 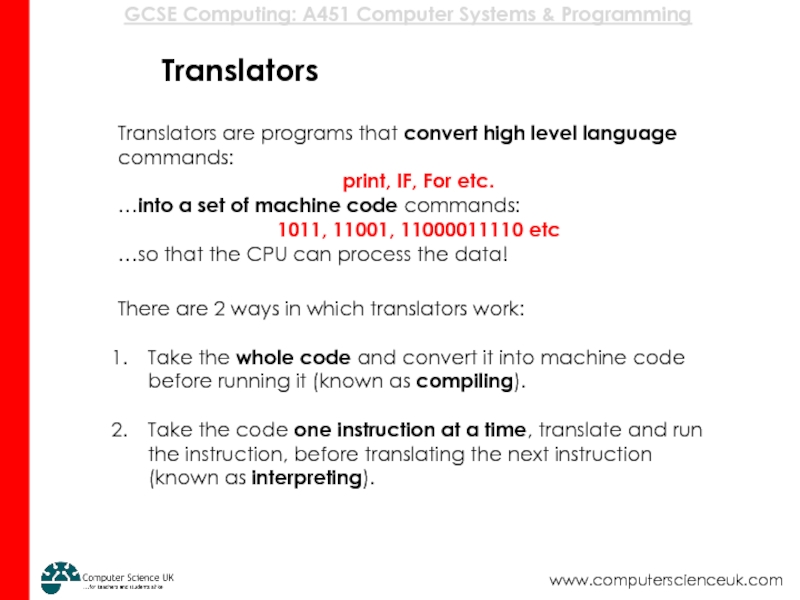 Слайд 9Types of Translator
There are 3 types of translator:
Translators
Compilers
Interpreters 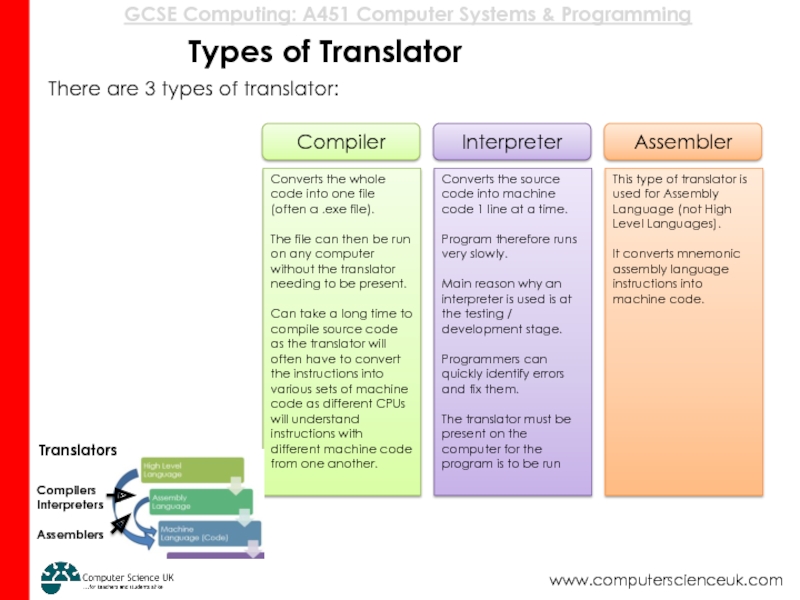 of mnemonics for machine opcodes so assemblers perform a 1:1 translation from mnemonics to a direct instruction.
For example: LDA #4 converts to 0001001000100100
Conversely, one instruction in a high level language will translate to one or more instructions at machine level.
Advantages of using an Assembler:
Very fast in translating assembly language to machine code as 1 to 1 relationship
Assembly code is often very efficient (and therefore fast) because it is a low level language
Assembly code is fairly easy to understand due to the use of English-like mnemonics
Disadvantages of using Assembler:
Assembly language is written for a certain instruction set and/or processor
Assembly tends to be optimised for the hardware it's designed for, meaning it is often incompatible with different hardware
Lots of assembly code is needed to do relatively simple tasks, and complex programs require lots of programming time 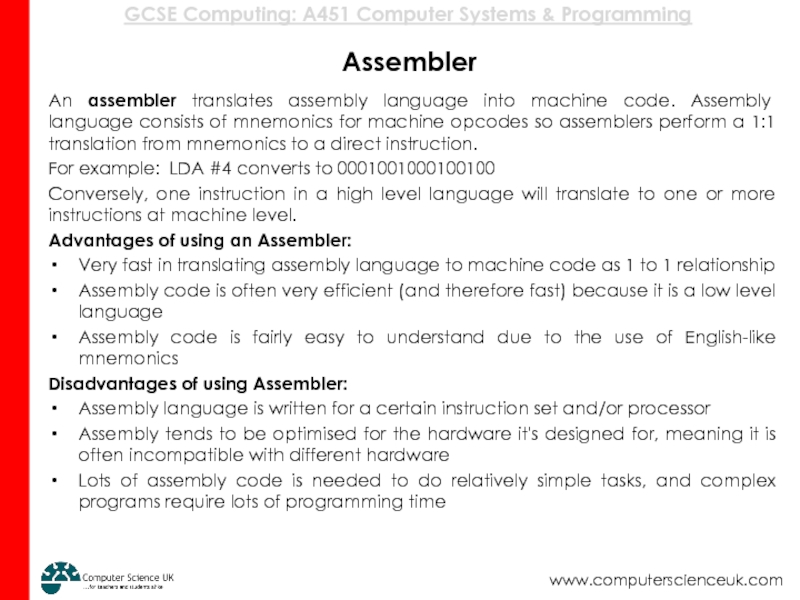 Advantages of using a compiler
Source code is not included, therefore compiled code is more secure than interpreted code
Tends to produce faster code than interpreting source code
Produces an executable file, and therefore the program can be run without need of the source code 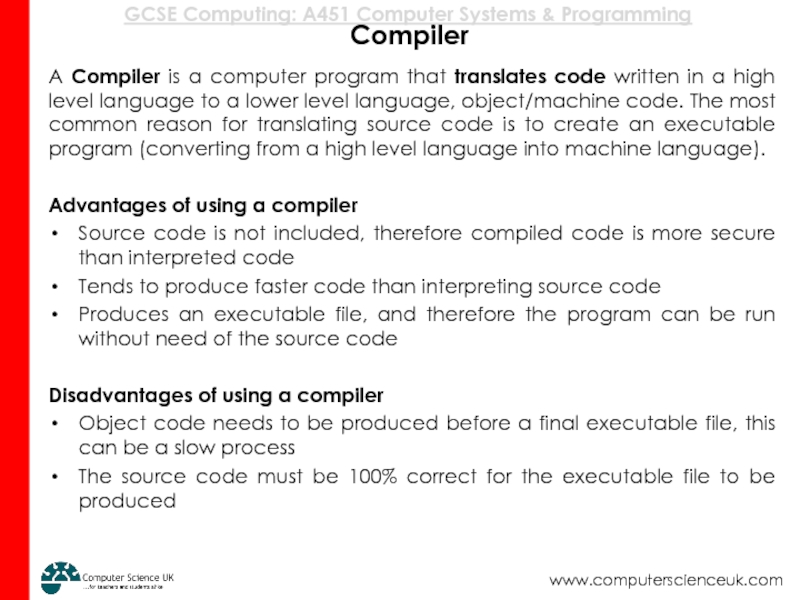 and executing it line-by-line. As it analyses every line, an interpreter is slower than running compiled code but it can take less time to interpret program code than to compile and then run it — this is very useful when prototyping and testing code. Interpreters are written for multiple platforms, this means code written once can be run immediately on different systems without having to recompile for each. Examples of this include flash based web programs that will run on your PC, MAC, games console and Mobile phone.
Advantages of using an Interpreter
Easier to debug(check errors) than a compiler
Easier to create multi-platform code, as each different platform would have an interpreter to run the same code
Useful for prototyping software and testing basic program logic

Disadvantages of using an Interpreter
Source code is required for the program to be executed, and this source code can be read making it insecure
Interpreters are generally slower than compiled programs due to the per-line translation method 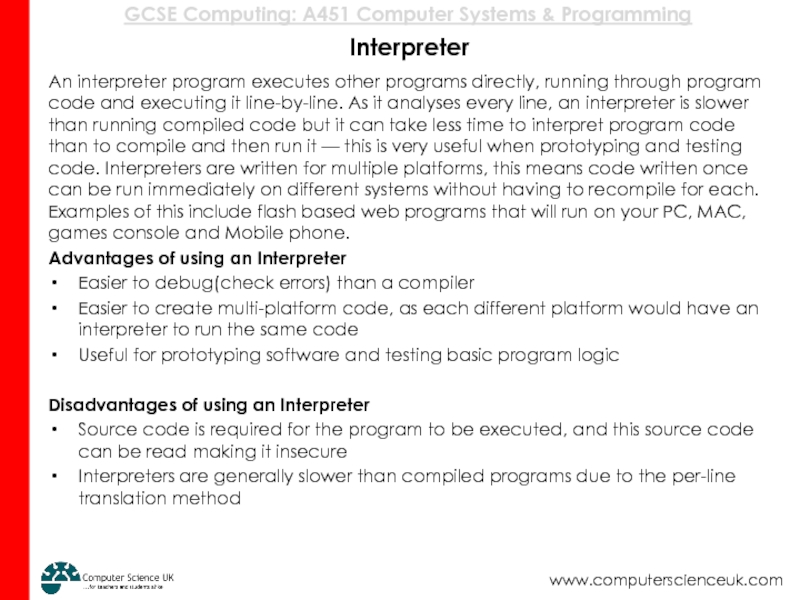 Слайд 13Questions
For a computer game running on a home console, would you

use a compiler or an interpeter? Explain why.

For a simple learning tool that will be released on the web for school children to use at home, what would be the best choice of translator? Explain why. 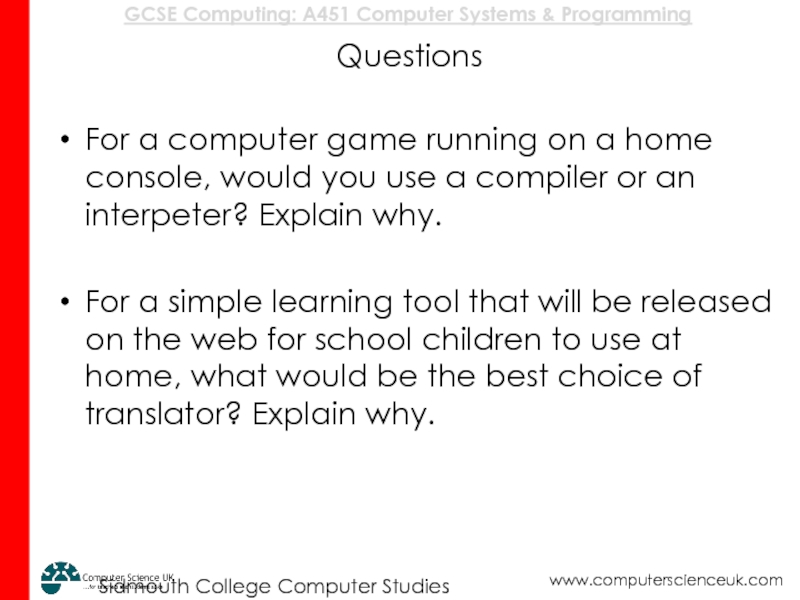 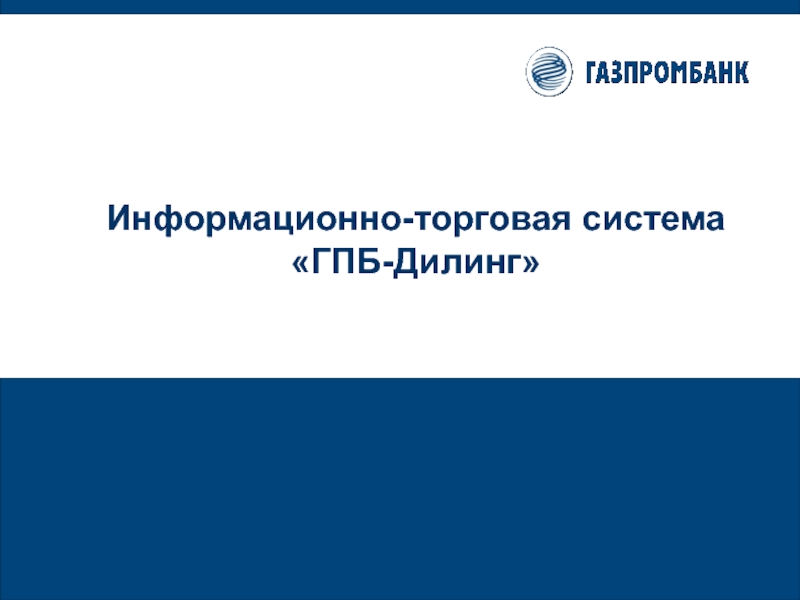 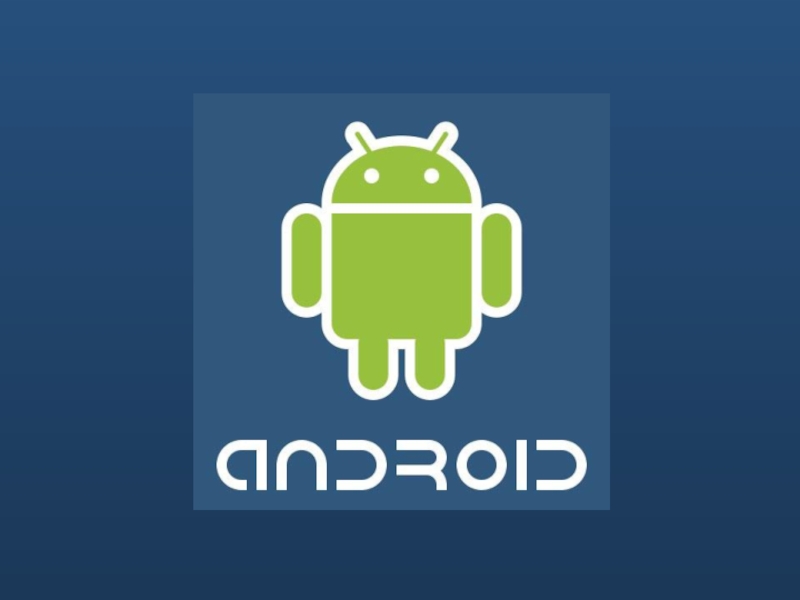 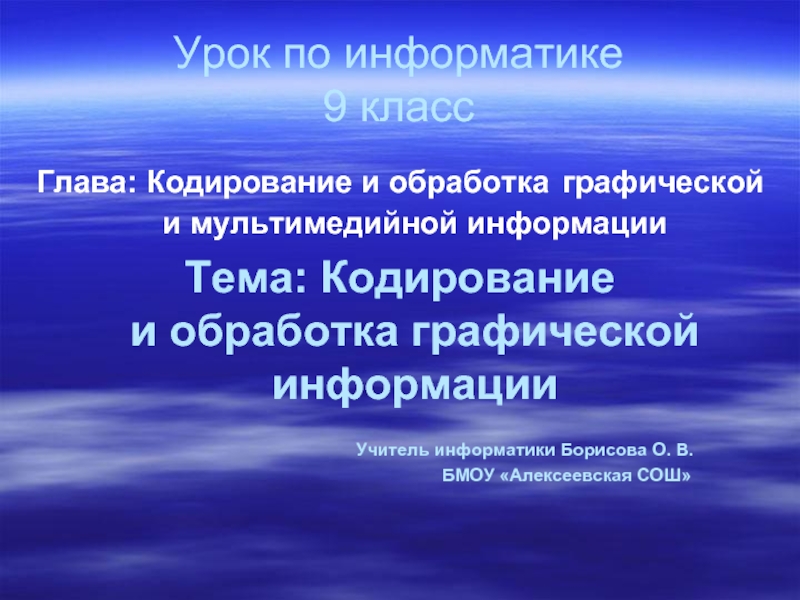 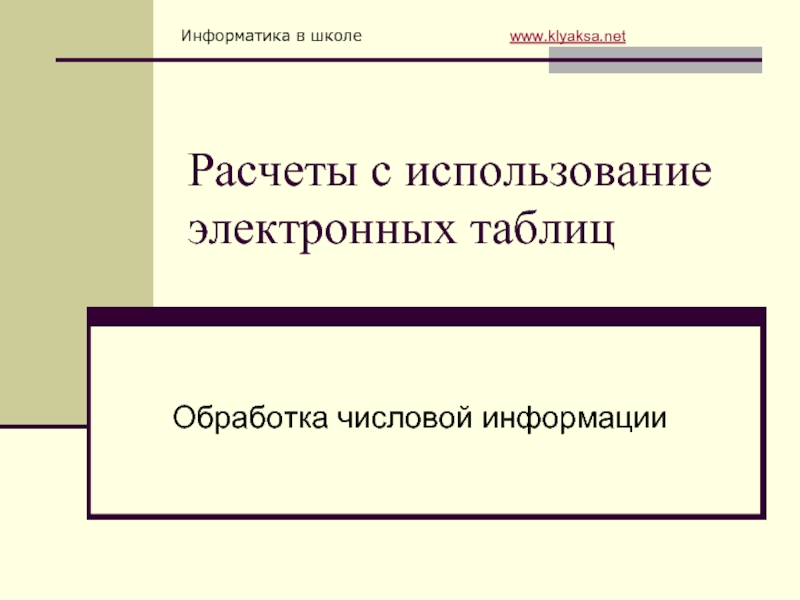 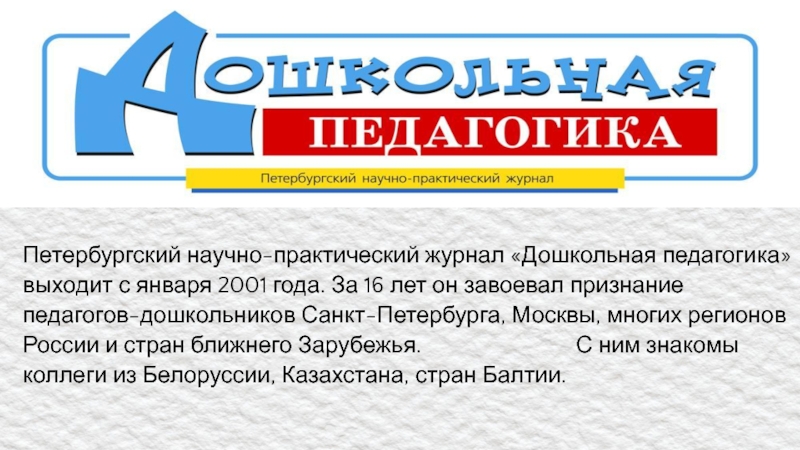 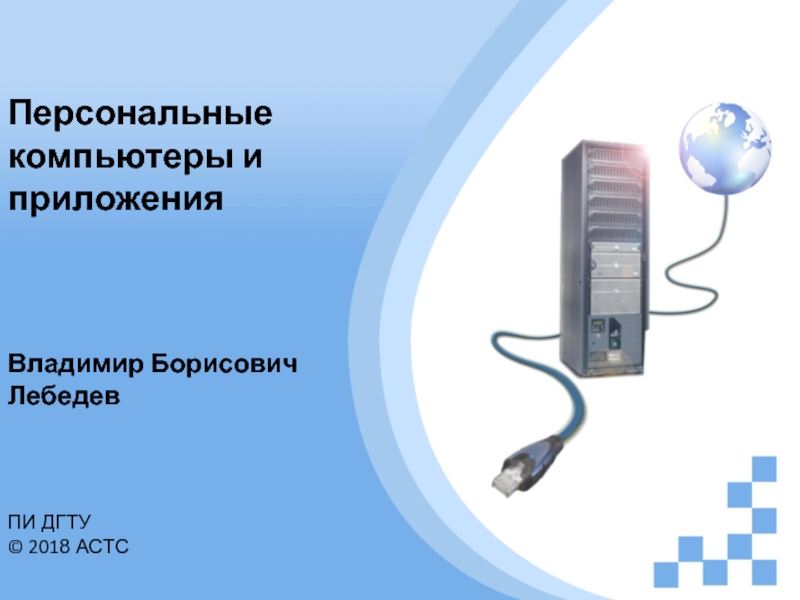