These sights will tell you about the history of the city, its development and growth. 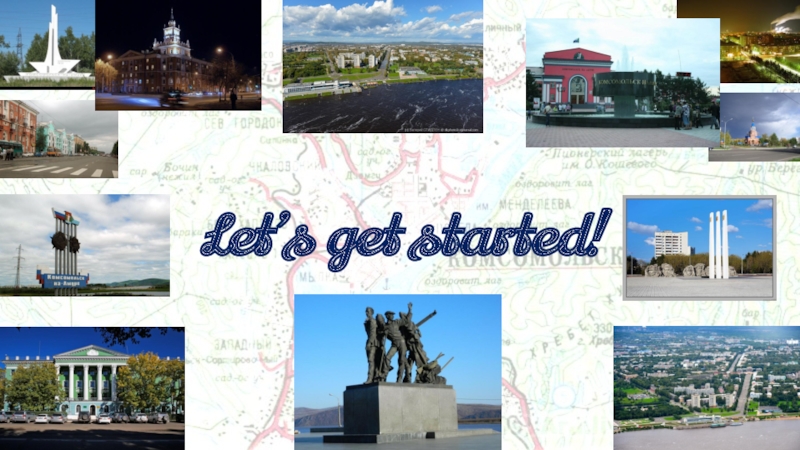 Komsomolsk-on-Amur is the second largest city of Khabarovsk krai and the fourth largest city in the Far East of Russia, standing on the left bank of the Amur River, 404 km north-east of Khabarovsk (by road). The distance to Moscow is about 8,800 km. 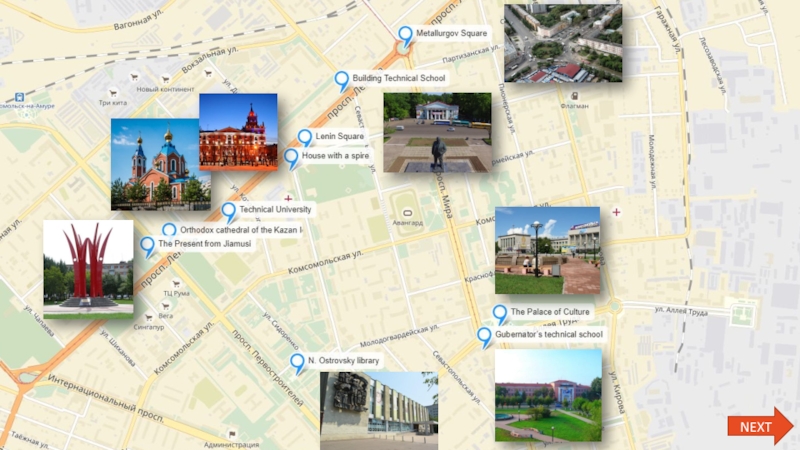 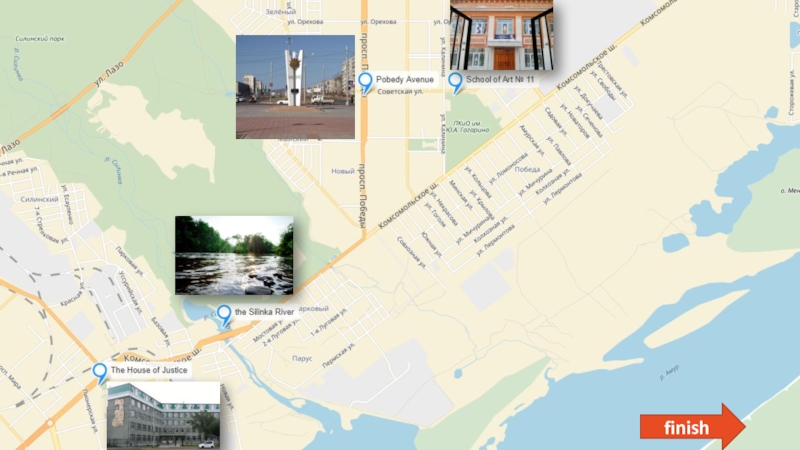 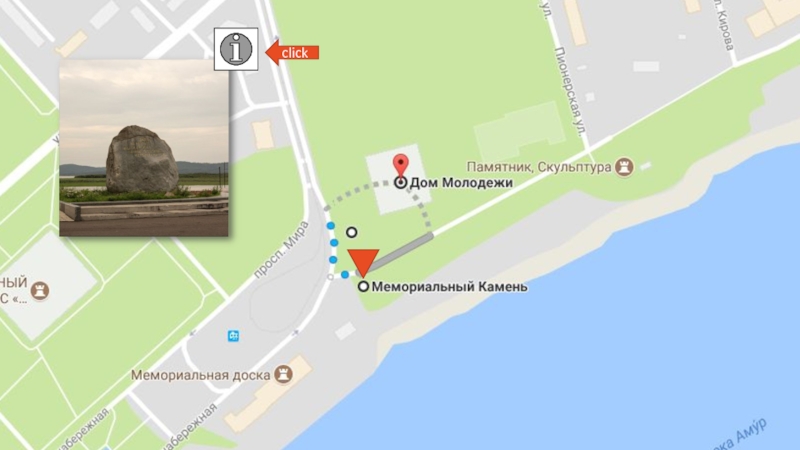 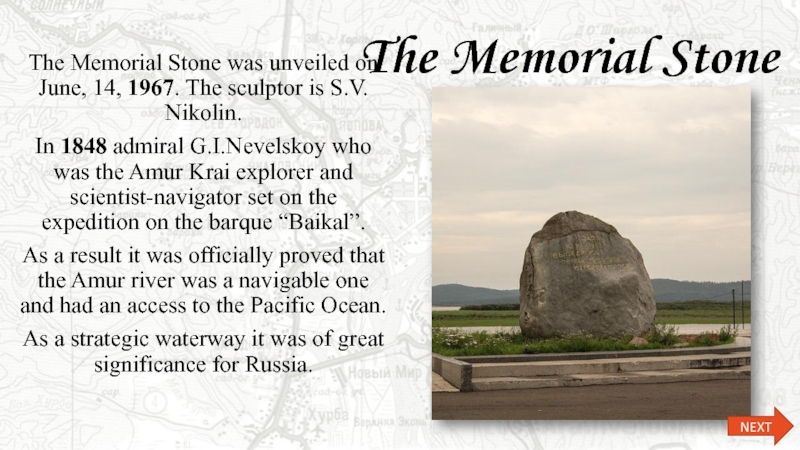 The Memorial Stone was unveiled on June, 14, 1967. The sculptor is S.V. Nikolin.
In 1848 admiral G.I.Nevelskoy who was the Amur Krai explorer and scientist-navigator set on the expedition on the barque “Baikal”.
As a result it was officially proved that the Amur river was a navigable one and had an access to the Pacific Ocean.
As a strategic waterway it was of great significance for Russia. 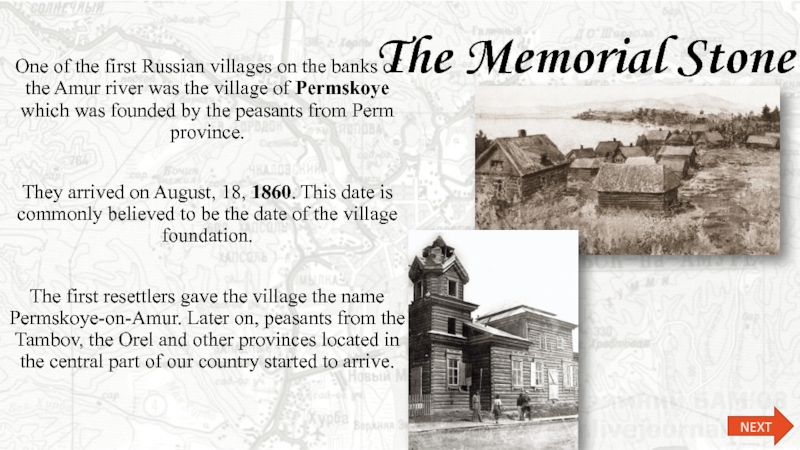 One of the first Russian villages on the banks of the Amur river was the village of Permskoye which was founded by the peasants from Perm province.

They arrived on August, 18, 1860. This date is commonly believed to be the date of the village foundation.

The first resettlers gave the village the name Permskoye-on-Amur. Later on, peasants from the Tambov, the Orel and other provinces located in the central part of our country started to arrive.

The wooden Church of the Holy Prophet Elijah built in 1909 stood at the highest point of the village and was seen from everywhere in the settlement.

In the early 1930s the USSR Government paid special attention to the national defence capacity and the Far East territory which was an important part of the country.
It was necessary to fortify Pacific Fleet and air forces. That is why the main aim was the construction of shipbuilding and aircraft-building plants.
On February, 23, 1932 the decision to construct the shipbuilding plant near the village of Permskoye was made. On May, 2 steamers “Kolumb” and “Komintern” and the barge “Clara Zretkin” brought the group of the city first builders to the Amure shore.
On June, 14, 1967 the rocky lump was erected at the sight where the first Komsomol builders had landed. The inscription runs as follows:
“Here on May, 10, 1932 the first Komsomol members, builders of the city, landed ashore”. 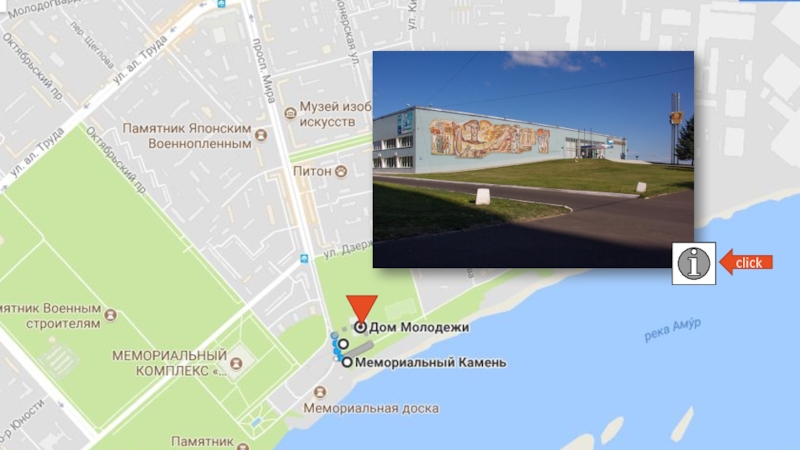 The House of Youth

The House of Youth was designed by Moscow architect F.I. Otradinsky. The official opening ceremony took place on June, 15, 1967.

The right to cut the entrance tape of the country’s first Komsomol House of Youth was granted to the honorary guest of our city, the first cosmonaut Y.A.Gagarin.

The House of Youth was the first recreational center of such a type in the city.

There is a concert hall with 600 seats, the city’s first swimming pool, an exhibition hall, a dance hall and a café.

The River station, built upon the project by the Leningrad architect B. A. Votinov, was opened on May 2, 1976.

It was designed to look like a ship from the Amur's side. In its construction you can discern decks, a bow, a stern, a funnel and a gangway.

Its three wharfs mark the level of the Amur within ten meters. 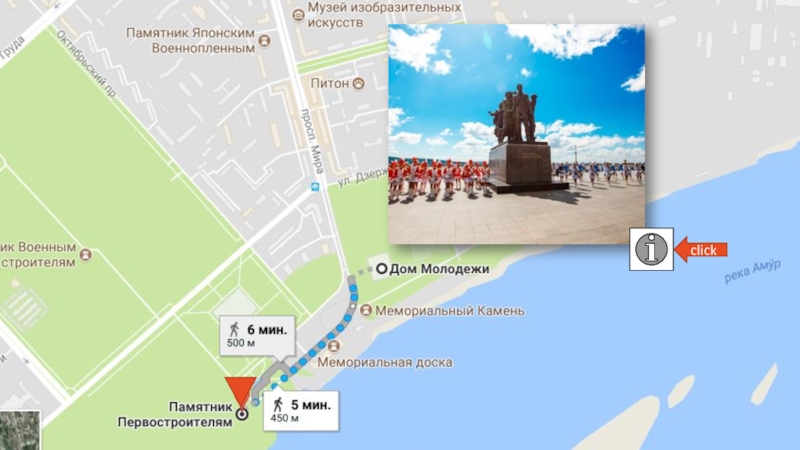 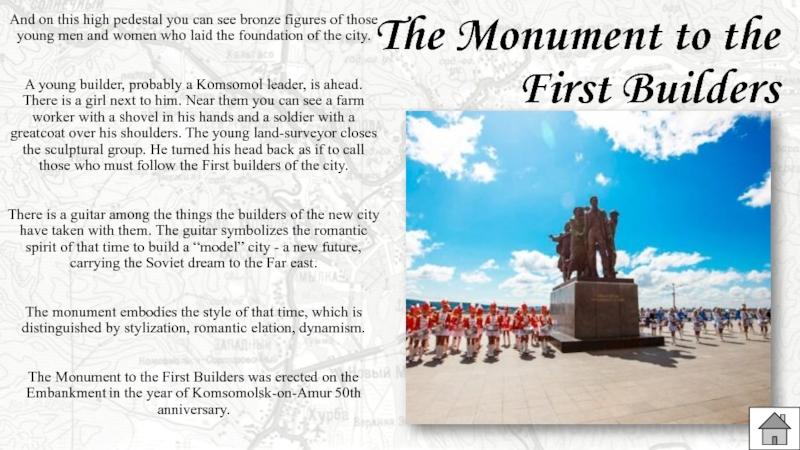 The Monument to the First Builders

And on this high pedestal you can see bronze figures of those young men and women who laid the foundation of the city.

A young builder, probably a Komsomol leader, is ahead. There is a girl next to him. Near them you can see a farm worker with a shovel in his hands and a soldier with a greatcoat over his shoulders. The young land-surveyor closes the sculptural group. He turned his head back as if to call those who must follow the First builders of the city.

There is a guitar among the things the builders of the new city have taken with them. The guitar symbolizes the romantic spirit of that time to build a “model” city - a new future, carrying the Soviet dream to the Far east.

The monument embodies the style of that time, which is distinguished by stylization, romantic elation, dynamism.

The Monument to the First Builders was erected on the Embankment in the year of Komsomolsk-on-Amur 50th anniversary. 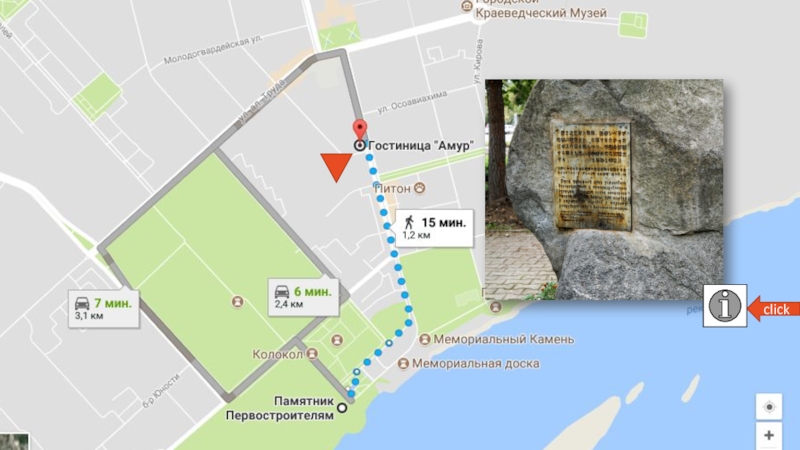 The Monument to the Japanese prisoners of war

Over 640 thousand of the Japanese army soldiers were captured during the WW II. From 1945 to 1949 the prisoners of war and soldiers of the Kwantung Army were dislocated on the territory of former USSR.

The Japanese people worked at the factories, stored up timber for the city, unloaded the cars, made furniture, and built houses. There are more than 423 objects built by the Japanese prisoners of war.

The author of the installation is the Komsomolsk sculptor A. P. Smirnov. The stone for it was brought from Solnechny district.
On October 5, 1991 it was erected on Mira Avenue near the city’s first hotel "Amur", built by the Japanese prisoners of war. 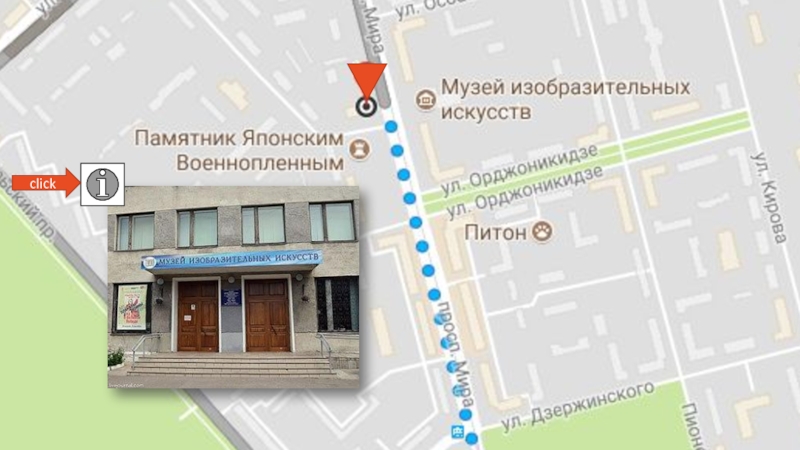 The Museum of Fine Arts

The museum moved to the building on Mira Avenue in 1992.
On the ground floor is a hall for temporary exhibitions. Upstairs one can find a nice collection of indigenous art including ritual sculptures, clothing, utensils and ornaments from the Narnaii's and other Amur estuary aboriginal peoples. 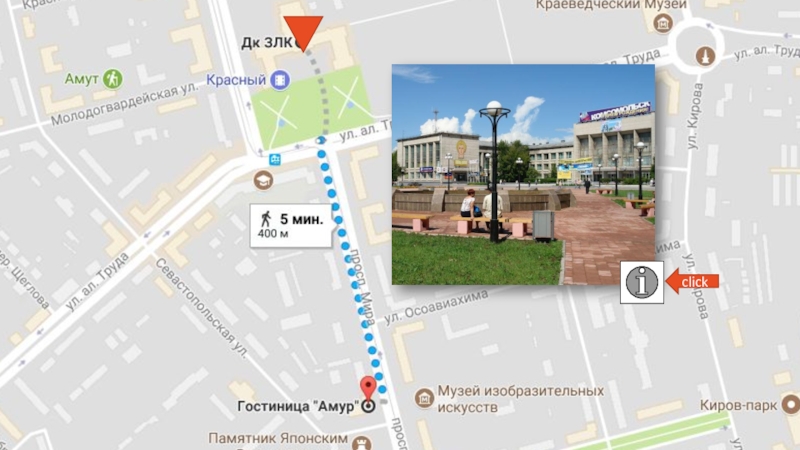 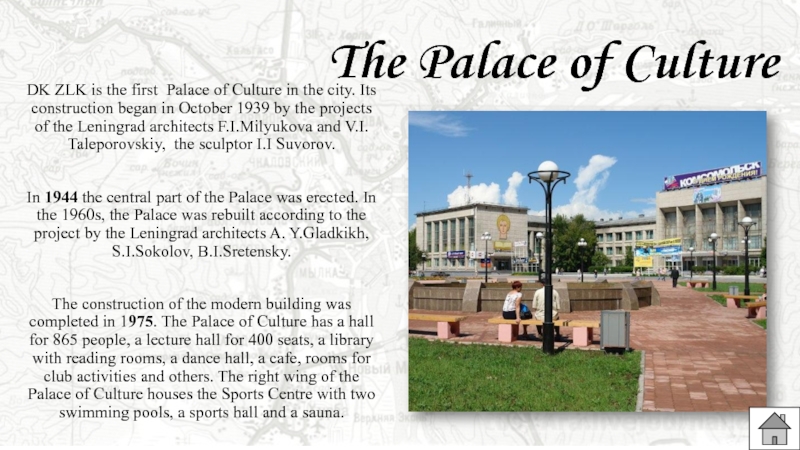 The Palace of Culture

DK ZLK is the first Palace of Culture in the city. Its construction began in October 1939 by the projects of the Leningrad architects F.I.Milyukova and V.I. Taleporovskiy, the sculptor I.I Suvorov.

In 1944 the central part of the Palace was erected. In the 1960s, the Palace was rebuilt according to the project by the Leningrad architects A. Y.Gladkikh, S.I.Sokolov, B.I.Sretensky.

The construction of the modern building was completed in 1975. The Palace of Culture has a hall for 865 people, a lecture hall for 400 seats, a library with reading rooms, a dance hall, a cafe, rooms for club activities and others. The right wing of the Palace of Culture houses the Sports Centre with two swimming pools, a sports hall and a sauna. 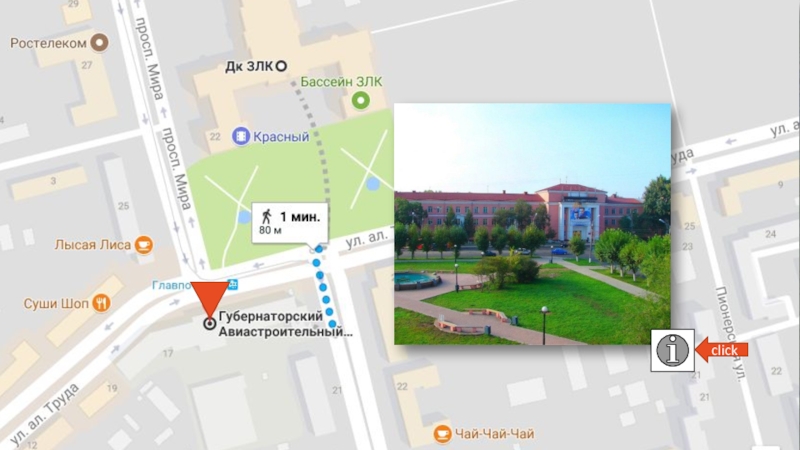 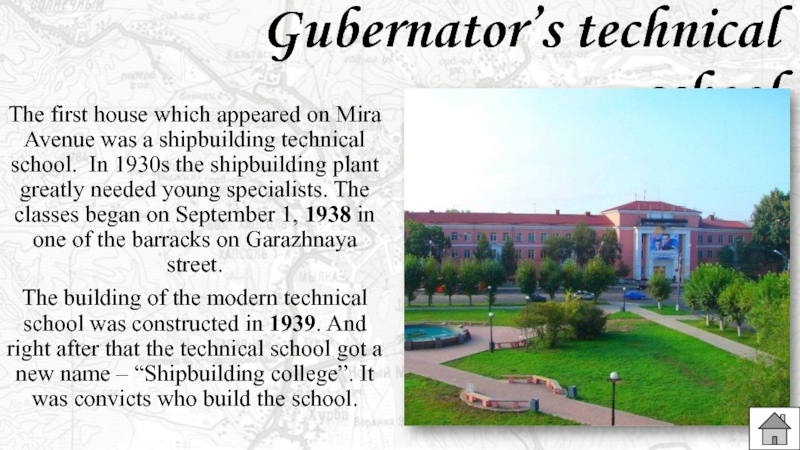 The first house which appeared on Mira Avenue was a shipbuilding technical school. In 1930s the shipbuilding plant greatly needed young specialists. The classes began on September 1, 1938 in one of the barracks on Garazhnaya street.
The building of the modern technical school was constructed in 1939. And right after that the technical school got a new name – “Shipbuilding college”. It was convicts who build the school.

The first city library was opened in 1936 in a wooden house on the embankment of the Amur river. The library moved to the new building in 1973. In front of the library there is a memorial sign to Nikolai Ostrovsky.
N.Ostrovsky is a Soviet writer, the author of the novel “How the Steel Was Tempered”.
The sculpture is made of copper and is 3.80 meters high. The height of the pedestal, covered with red marble is 4 meters. 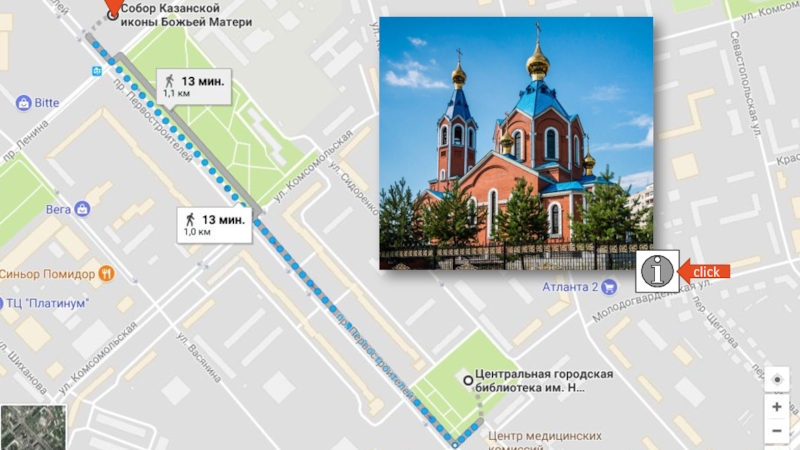 Orthodox cathedral of the Kazan Icon of the God’s Mother

The opening of the temple was held on November 4, 2001 on the day of the celebration of the Kazan Icon of the God’s Mother.

The Cathedral with a cross is 29 meters long, 19 meters wide and 28 meters high. 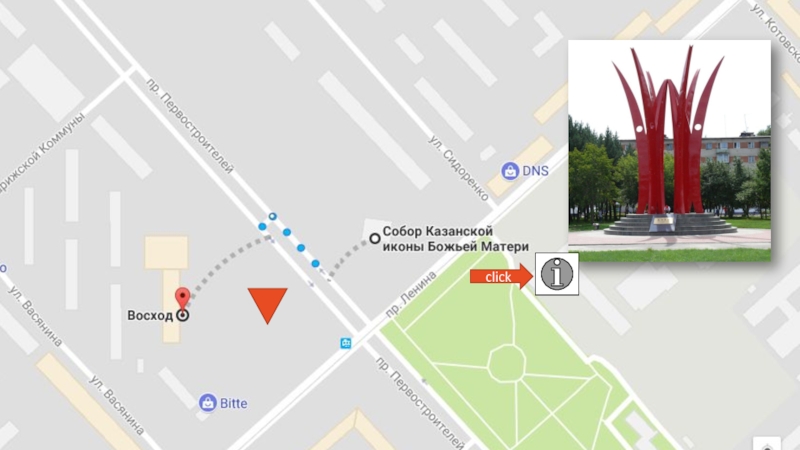 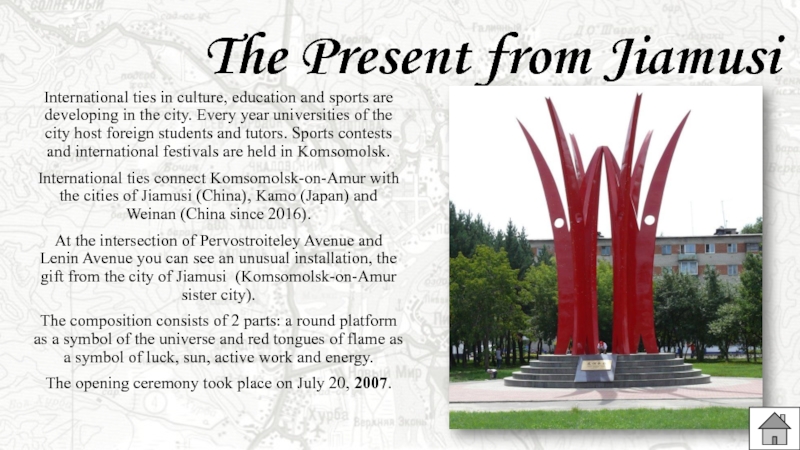 The Present from Jiamusi

International ties in culture, education and sports are developing in the city. Every year universities of the city host foreign students and tutors. Sports contests and international festivals are held in Komsomolsk.
International ties connect Komsomolsk-on-Amur with the cities of Jiamusi (China), Kamo (Japan) and Weinan (China since 2016).
At the intersection of Pervostroiteley Avenue and Lenin Avenue you can see an unusual installation, the gift from the city of Jiamusi (Komsomolsk-on-Amur sister city).
The composition consists of 2 parts: a round platform as a symbol of the universe and red tongues of flame as a symbol of luck, sun, active work and energy.
The opening ceremony took place on July 20, 2007. 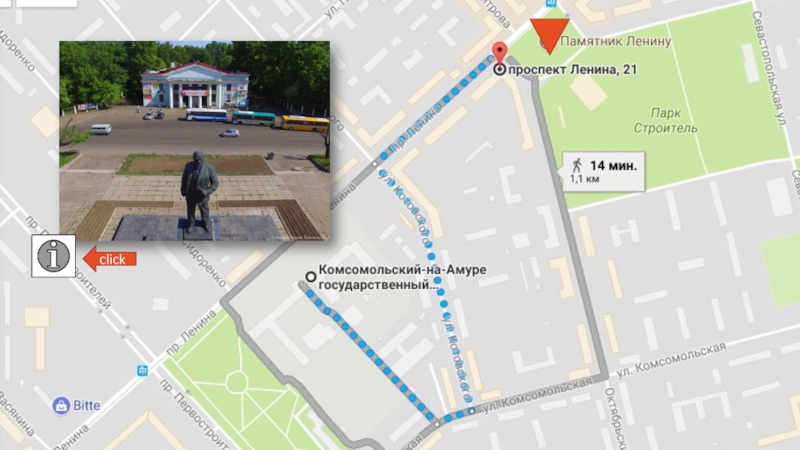 The first square with the completed architectural ensemble is the square named after Vladimir Ilyich Lenin. The grand opening was held on June 15, 1957. 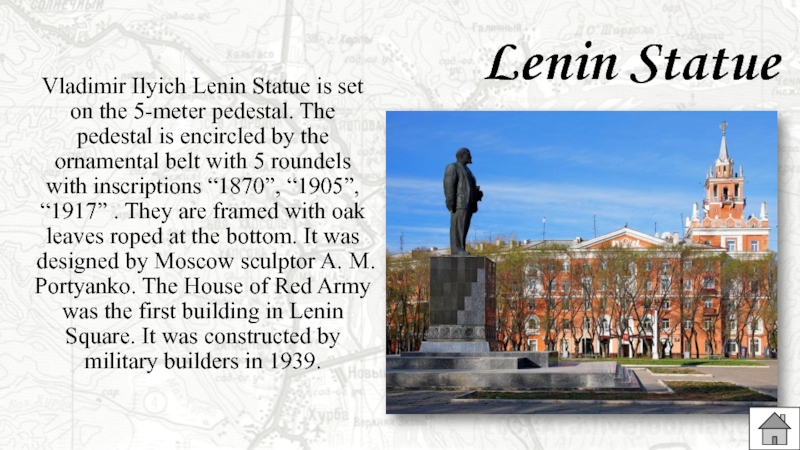 Vladimir Ilyich Lenin Statue is set on the 5-meter pedestal. The pedestal is encircled by the ornamental belt with 5 roundels with inscriptions “1870”, “1905”, “1917” . They are framed with oak leaves roped at the bottom. It was designed by Moscow sculptor A. M. Portyanko. The House of Red Army was the first building in Lenin Square. It was constructed by military builders in 1939. 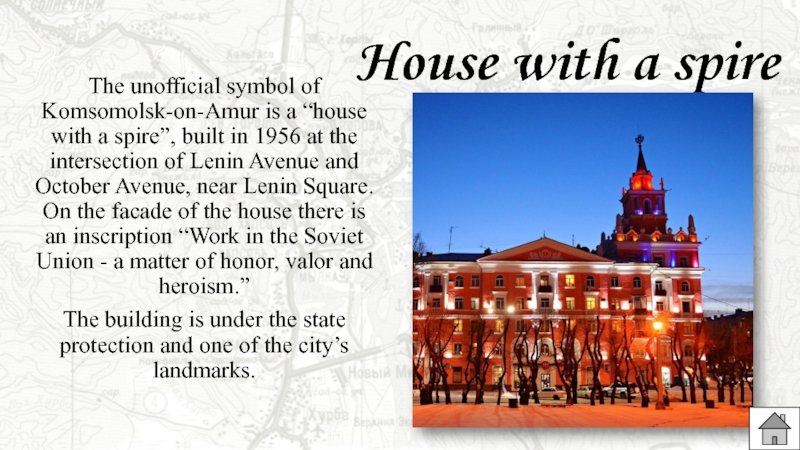 House with a spire

The unofficial symbol of Komsomolsk-on-Amur is a “house with a spire”, built in 1956 at the intersection of Lenin Avenue and October Avenue, near Lenin Square. On the facade of the house there is an inscription “Work in the Soviet Union - a matter of honor, valor and heroism.”
The building is under the state protection and one of the city’s landmarks. 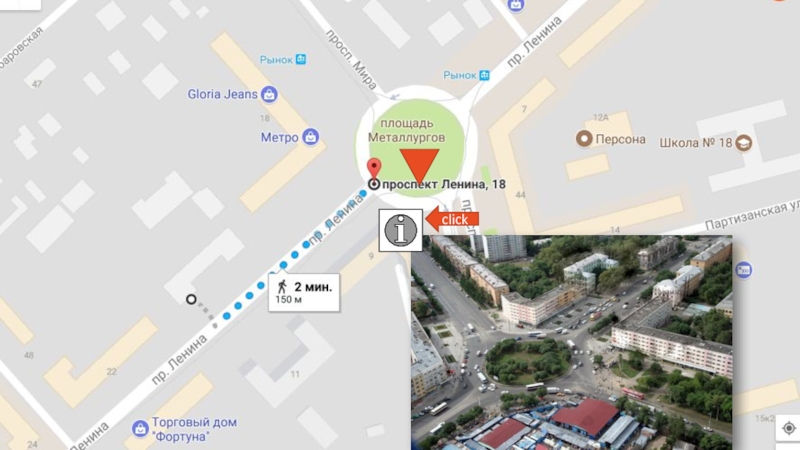 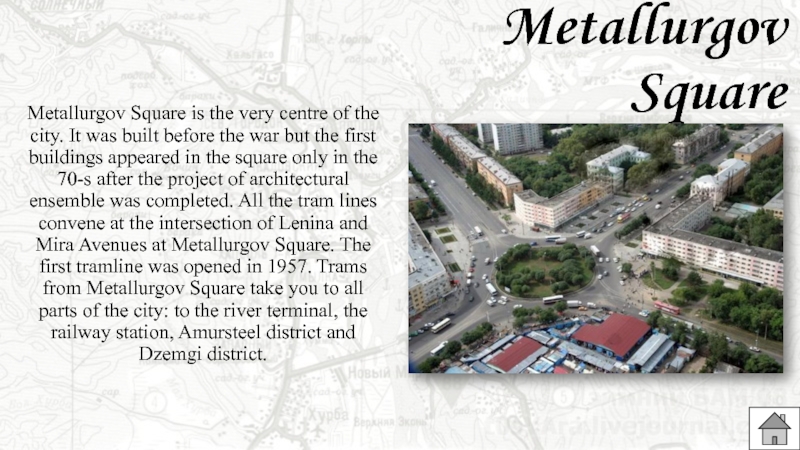 Metallurgov Square is the very centre of the city. It was built before the war but the first buildings appeared in the square only in the 70-s after the project of architectural ensemble was completed. All the tram lines convene at the intersection of Lenina and Mira Avenues at Metallurgov Square. The first tramline was opened in 1957. Trams from Metallurgov Square take you to all parts of the city: to the river terminal, the railway station, Amursteel district and Dzemgi district. 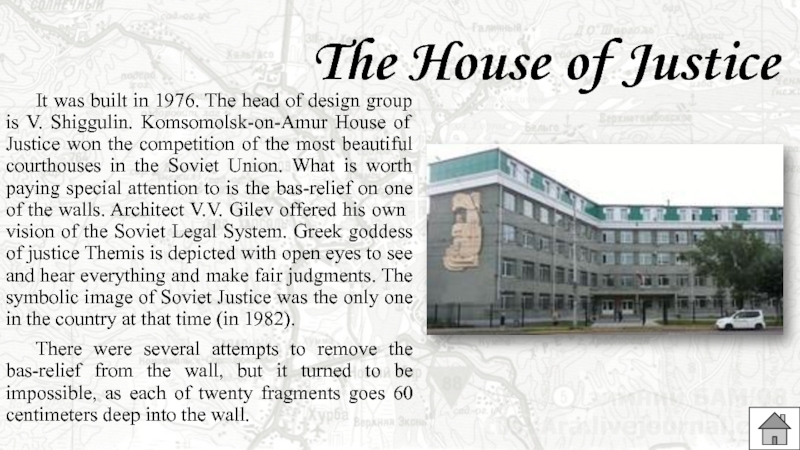 The House of Justice

It was built in 1976. The head of design group is V. Shiggulin. Komsomolsk-on-Amur House of Justice won the competition of the most beautiful courthouses in the Soviet Union. What is worth paying special attention to is the bas-relief on one of the walls. Architect V.V. Gilev offered his own vision of the Soviet Legal System. Greek goddess of justice Themis is depicted with open eyes to see and hear everything and make fair judgments. The symbolic image of Soviet Justice was the only one in the country at that time (in 1982).
There were several attempts to remove the bas-relief from the wall, but it turned to be impossible, as each of twenty fragments goes 60 centimeters deep into the wall. 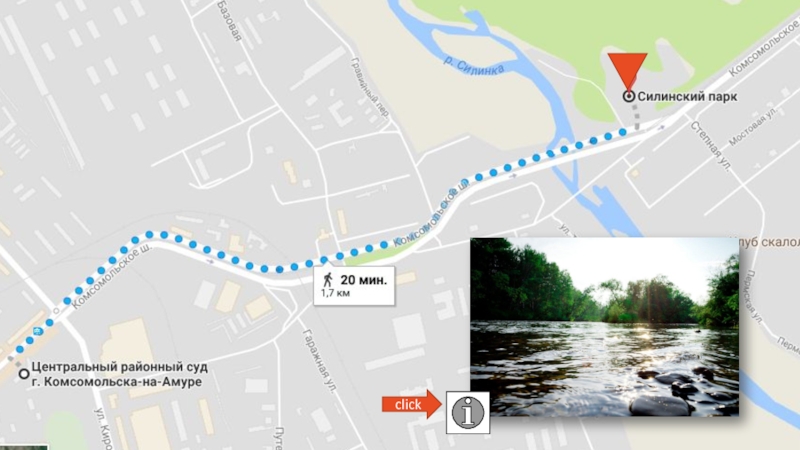 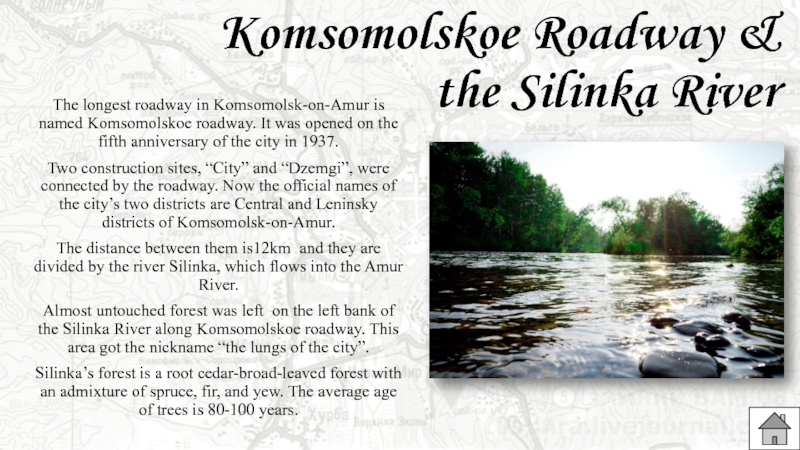 The longest roadway in Komsomolsk-on-Amur is named Komsomolskoe roadway. It was opened on the fifth anniversary of the city in 1937.
Two construction sites, “City” and “Dzemgi”, were connected by the roadway. Now the official names of the city’s two districts are Central and Leninsky districts of Komsomolsk-on-Amur.
The distance between them is12km and they are divided by the river Silinka, which flows into the Amur River.
Almost untouched forest was left on the left bank of the Silinka River along Komsomolskoe roadway. This area got the nickname “the lungs of the city”.
Silinka’s forest is a root cedar-broad-leaved forest with an admixture of spruce, fir, and yew. The average age of trees is 80-100 years.

In December1985 Odesskaya Street in Lenin District was renamed as Pobedy Avenue. The author of the avenue is the Komsomolsk architect T. Pashkova
The Victory Memorial on Pobedy Avenue was opened on May7th, 2005. There is an inscription on the memorial plaque fixed on the Steles: " In honor of  the 60th anniversary of the victory in the Great Patriotic War (1941-1945)
(from Komsomolsk-on-Amur organizations and enterprises)“. 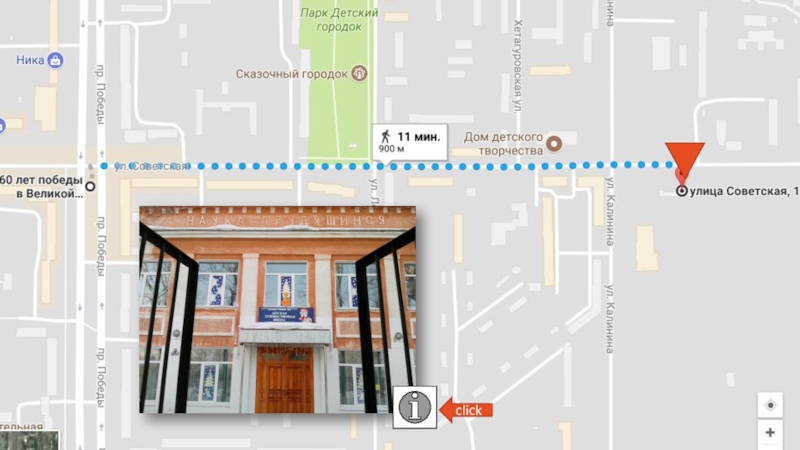 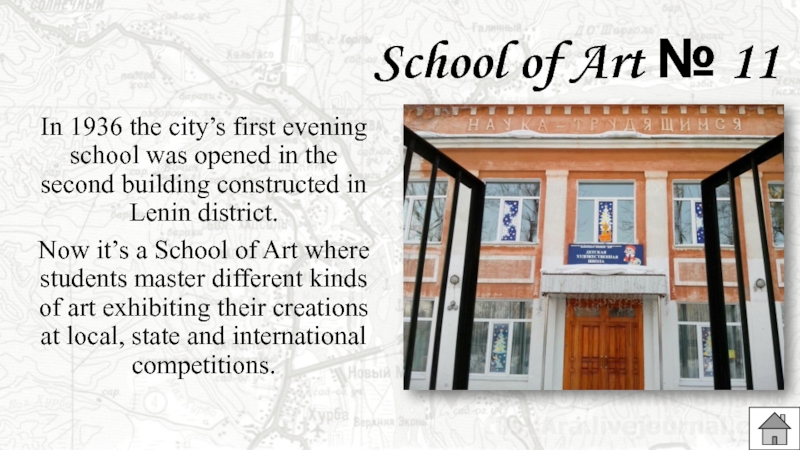 In 1936 the city’s first evening school was opened in the second building constructed in Lenin district.
Now it’s a School of Art where students master different kinds of art exhibiting their creations at local, state and international competitions.