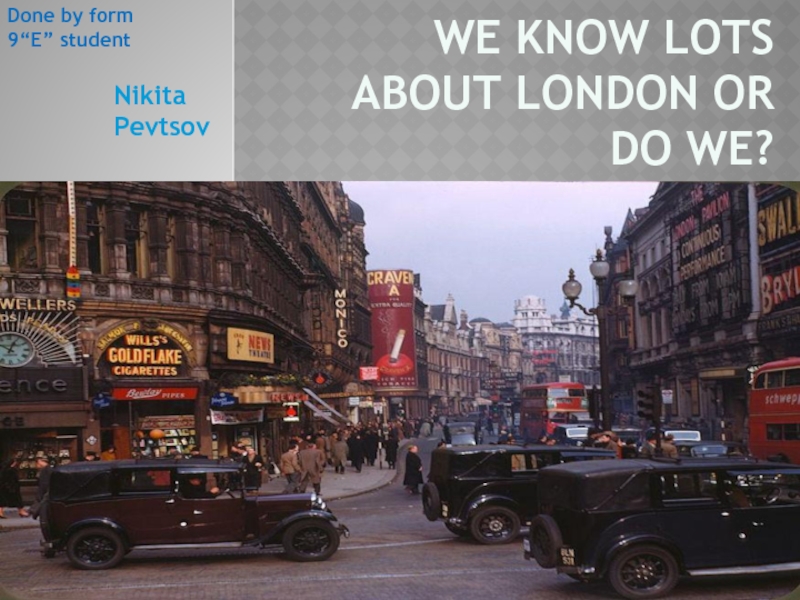 WE KNOW LOTS ABOUT LONDON OR DO WE? 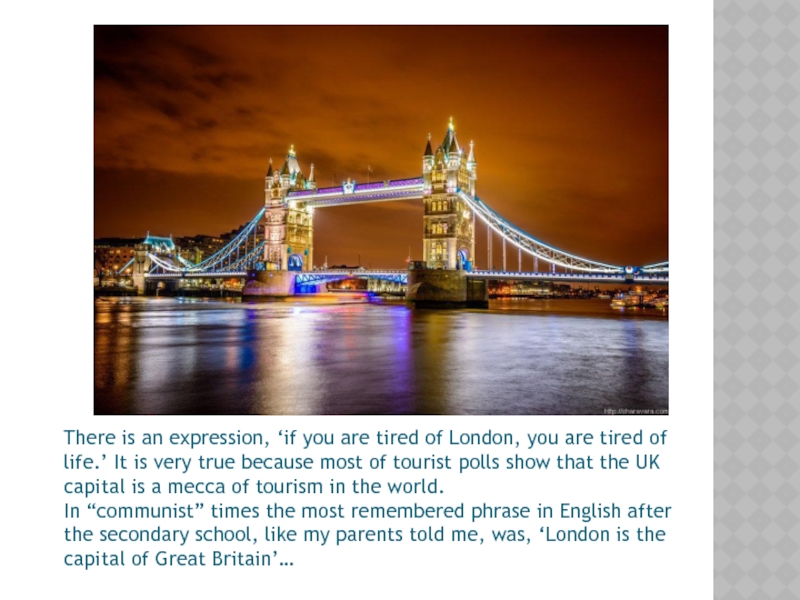 There is an expression, ‘if you are tired of London, you are tired of life.’ It is very true because most of tourist polls show that the UK capital is a mecca of tourism in the world.
In “communist” times the most remembered phrase in English after the secondary school, like my parents told me, was, ‘London is the capital of Great Britain’… 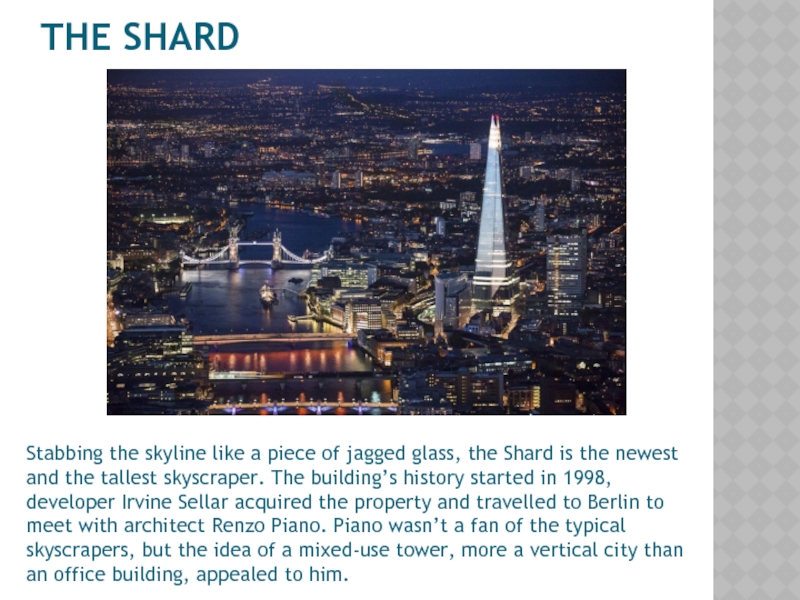 Stabbing the skyline like a piece of jagged glass, the Shard is the newest and the tallest skyscraper. The building’s history started in 1998, developer Irvine Sellar acquired the property and travelled to Berlin to meet with architect Renzo Piano. Piano wasn’t a fan of the typical skyscrapers, but the idea of a mixed-use tower, more a vertical city than an office building, appealed to him. 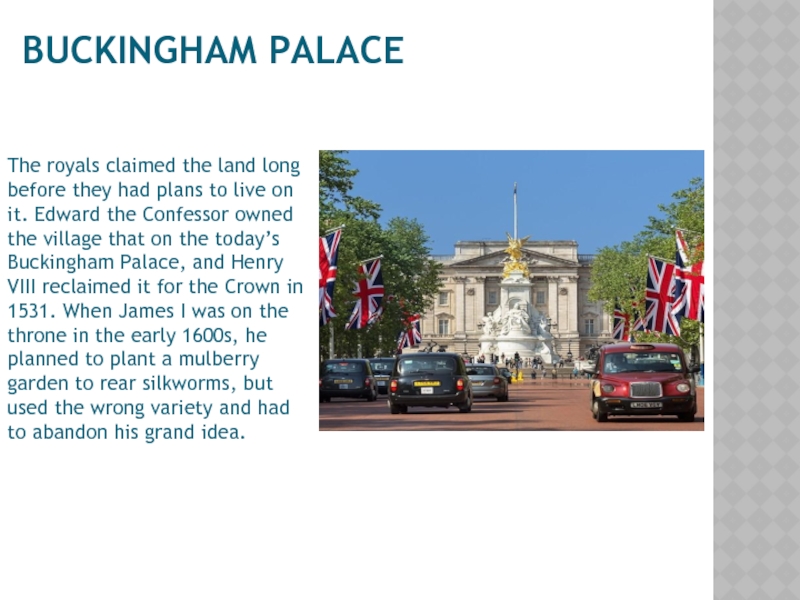 The royals claimed the land long before they had plans to live on it. Edward the Confessor owned the village that on the today’s Buckingham Palace, and Henry VIII reclaimed it for the Crown in 1531. When James I was on the throne in the early 1600s, he planned to plant a mulberry garden to rear silkworms, but used the wrong variety and had to abandon his grand idea. 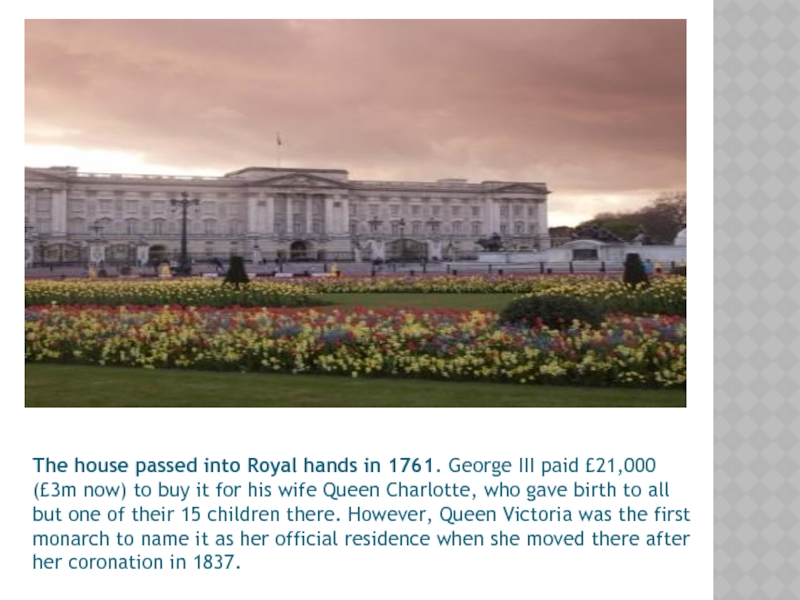 The house passed into Royal hands in 1761. George III paid £21,000 (£3m now) to buy it for his wife Queen Charlotte, who gave birth to all but one of their 15 children there. However, Queen Victoria was the first monarch to name it as her official residence when she moved there after her coronation in 1837. 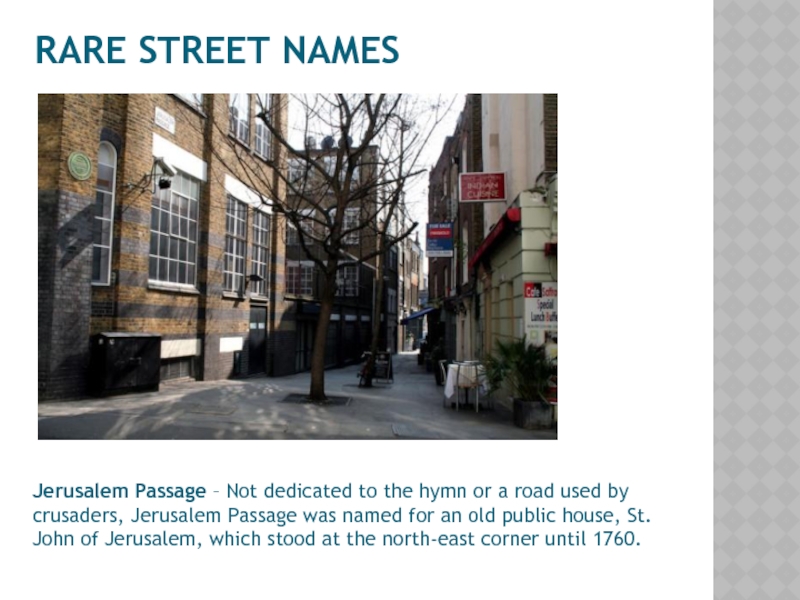 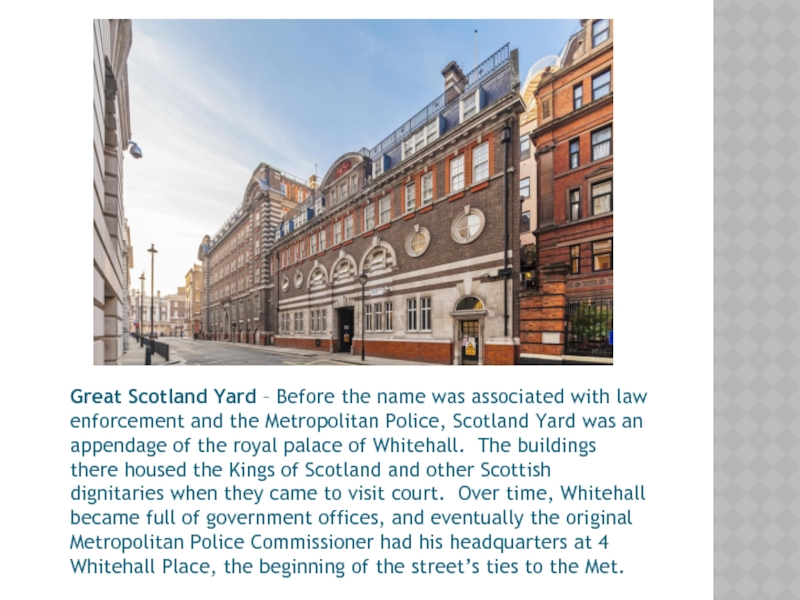 Great Scotland Yard – Before the name was associated with law enforcement and the Metropolitan Police, Scotland Yard was an appendage of the royal palace of Whitehall.  The buildings there housed the Kings of Scotland and other Scottish dignitaries when they came to visit court.  Over time, Whitehall became full of government offices, and eventually the original Metropolitan Police Commissioner had his headquarters at 4 Whitehall Place, the beginning of the street’s ties to the Met. 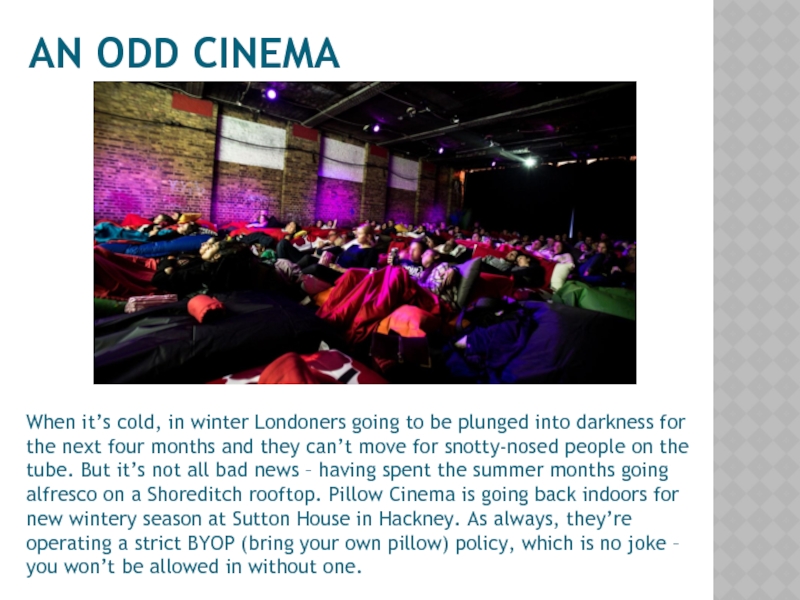 When it’s cold, in winter Londoners going to be plunged into darkness for the next four months and they can’t move for snotty-nosed people on the tube. But it’s not all bad news – having spent the summer months going alfresco on a Shoreditch rooftop. Pillow Cinema is going back indoors for new wintery season at Sutton House in Hackney. As always, they’re operating a strict BYOP (bring your own pillow) policy, which is no joke – you won’t be allowed in without one. 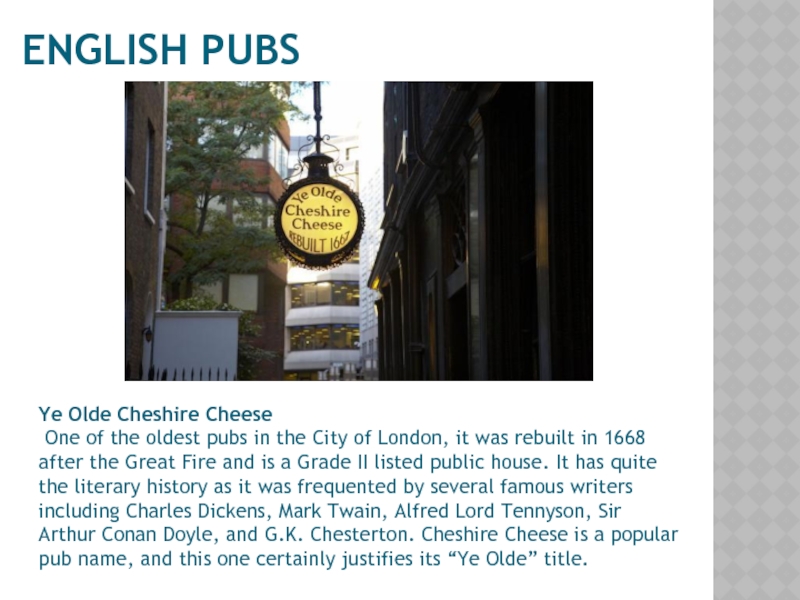 Ye Olde Cheshire Cheese
One of the oldest pubs in the City of London, it was rebuilt in 1668 after the Great Fire and is a Grade II listed public house. It has quite the literary history as it was frequented by several famous writers including Charles Dickens, Mark Twain, Alfred Lord Tennyson, Sir Arthur Conan Doyle, and G.K. Chesterton. Cheshire Cheese is a popular pub name, and this one certainly justifies its “Ye Olde” title. 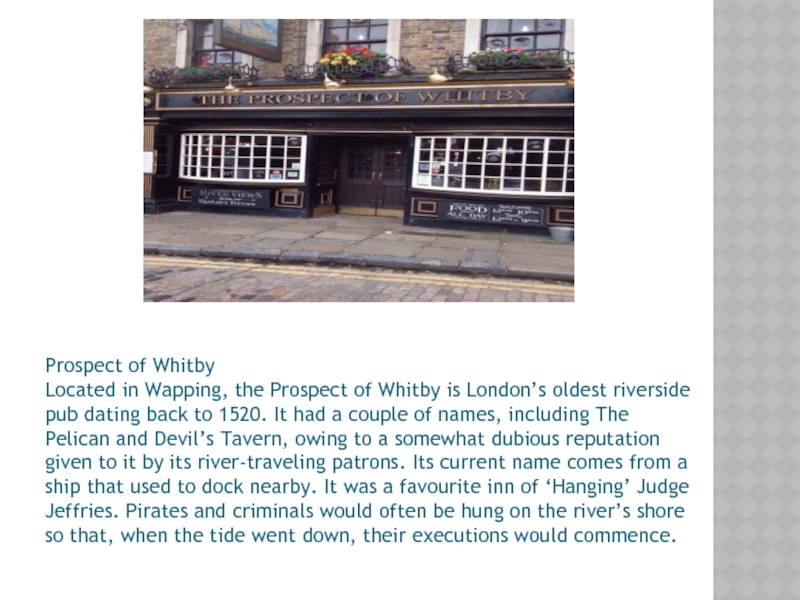 Prospect of Whitby
Located in Wapping, the Prospect of Whitby is London’s oldest riverside pub dating back to 1520. It had a couple of names, including The Pelican and Devil’s Tavern, owing to a somewhat dubious reputation given to it by its river-traveling patrons. Its current name comes from a ship that used to dock nearby. It was a favourite inn of ‘Hanging’ Judge Jeffries. Pirates and criminals would often be hung on the river’s shore so that, when the tide went down, their executions would commence. 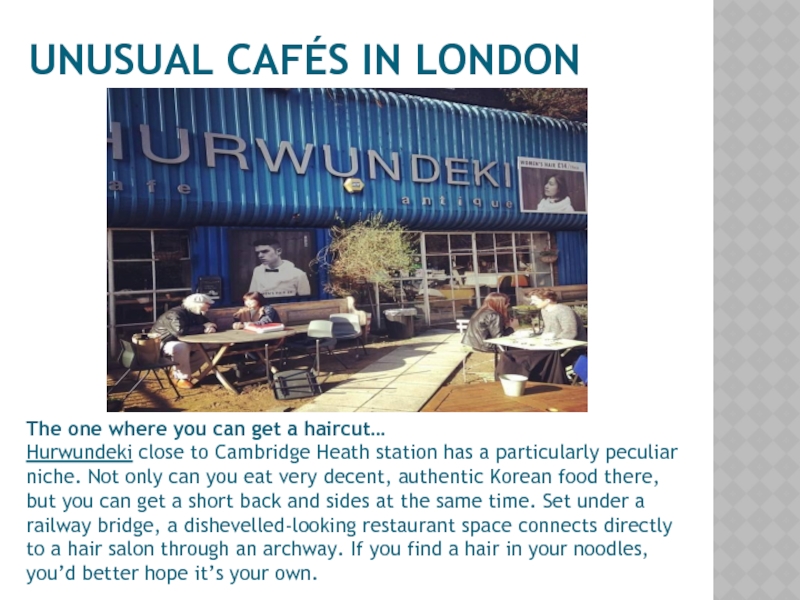 The one where you can get a haircut…
Hurwundeki close to Cambridge Heath station has a particularly peculiar niche. Not only can you eat very decent, authentic Korean food there, but you can get a short back and sides at the same time. Set under a railway bridge, a dishevelled-looking restaurant space connects directly to a hair salon through an archway. If you find a hair in your noodles, you’d better hope it’s your own. 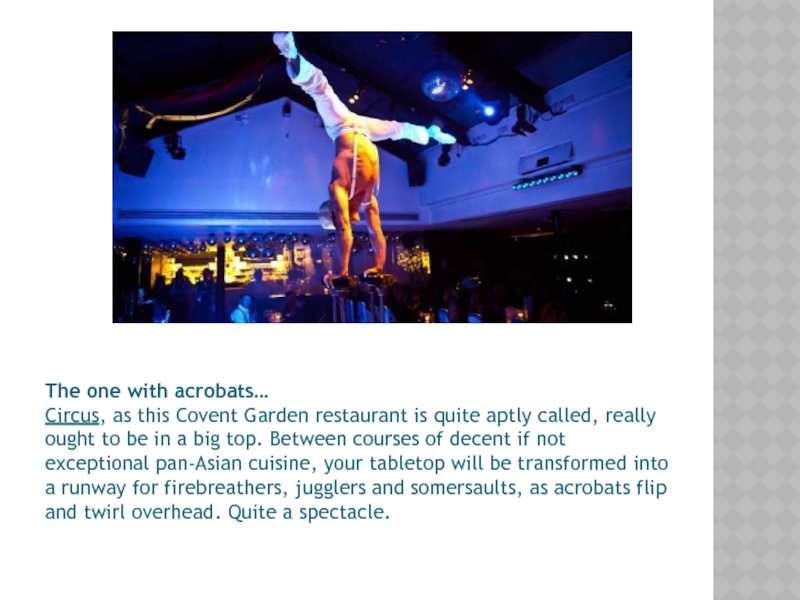 The one with acrobats…
Circus, as this Covent Garden restaurant is quite aptly called, really ought to be in a big top. Between courses of decent if not exceptional pan-Asian cuisine, your tabletop will be transformed into a runway for firebreathers, jugglers and somersaults, as acrobats flip and twirl overhead. Quite a spectacle. 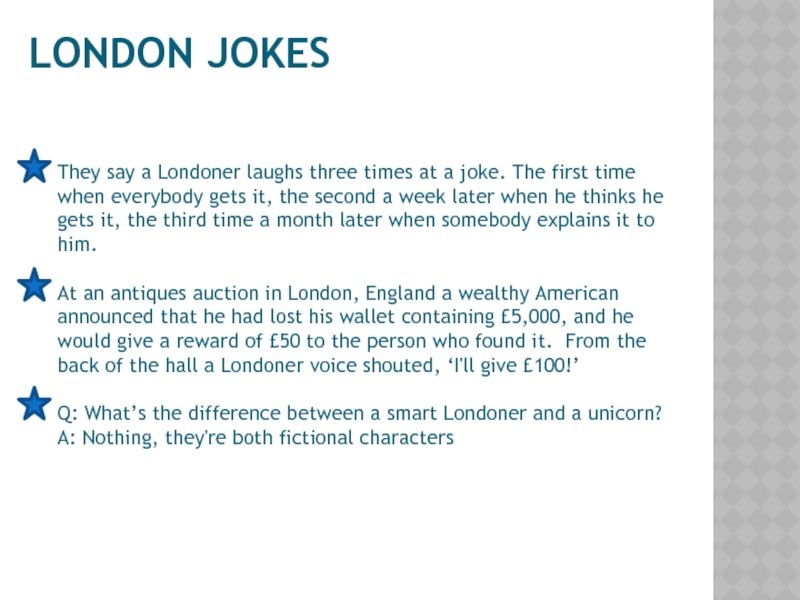 They say a Londoner laughs three times at a joke. The first time when everybody gets it, the second a week later when he thinks he gets it, the third time a month later when somebody explains it to him.

At an antiques auction in London, England a wealthy American announced that he had lost his wallet containing £5,000, and he would give a reward of £50 to the person who found it.  From the back of the hall a Londoner voice shouted, ‘I'll give £100!’

Q: What’s the difference between a smart Londoner and a unicorn?
A: Nothing, they're both fictional characters 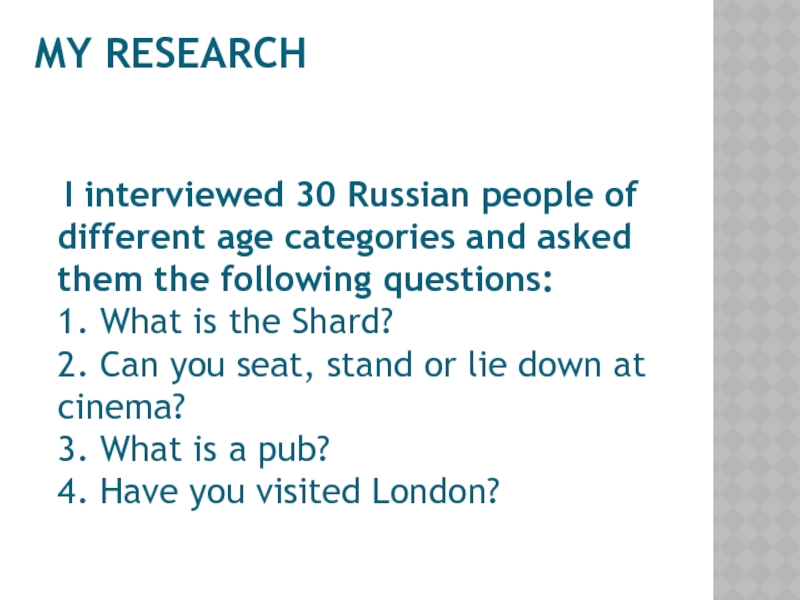 I interviewed 30 Russian people of different age categories and asked them the following questions:
1. What is the Shard?
2. Can you seat, stand or lie down at cinema?
3. What is a pub?
4. Have you visited London? 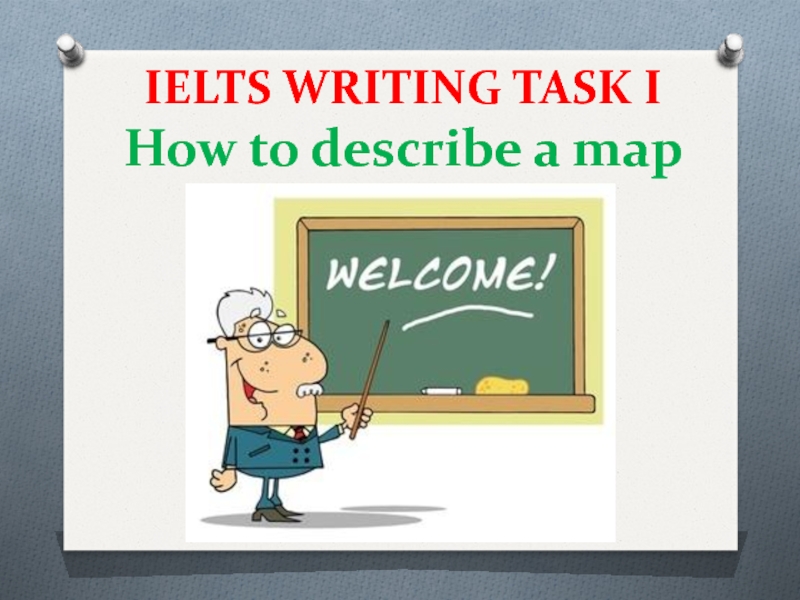 Ielts writing task I. How to describe a map 224 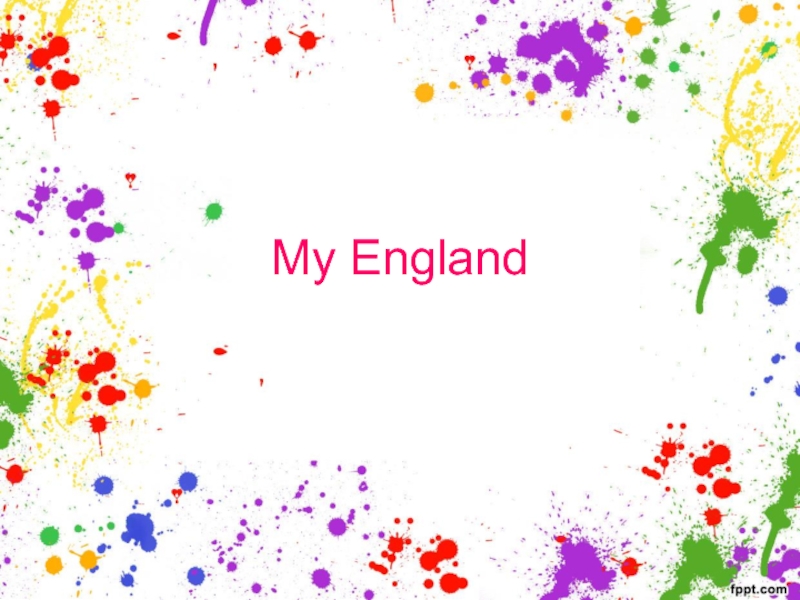 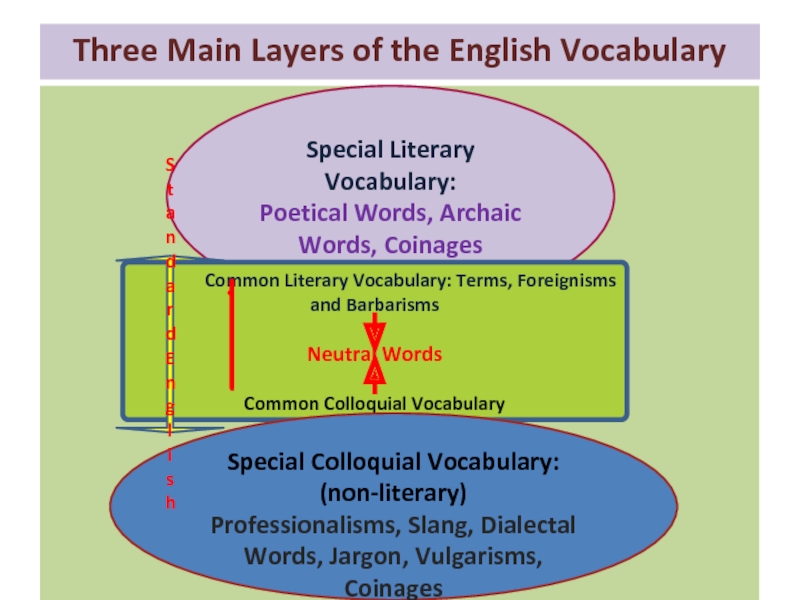 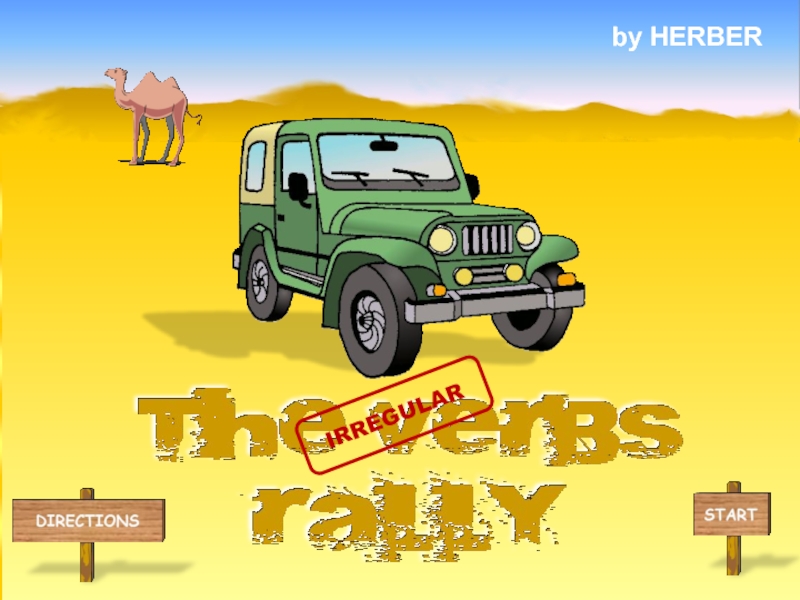 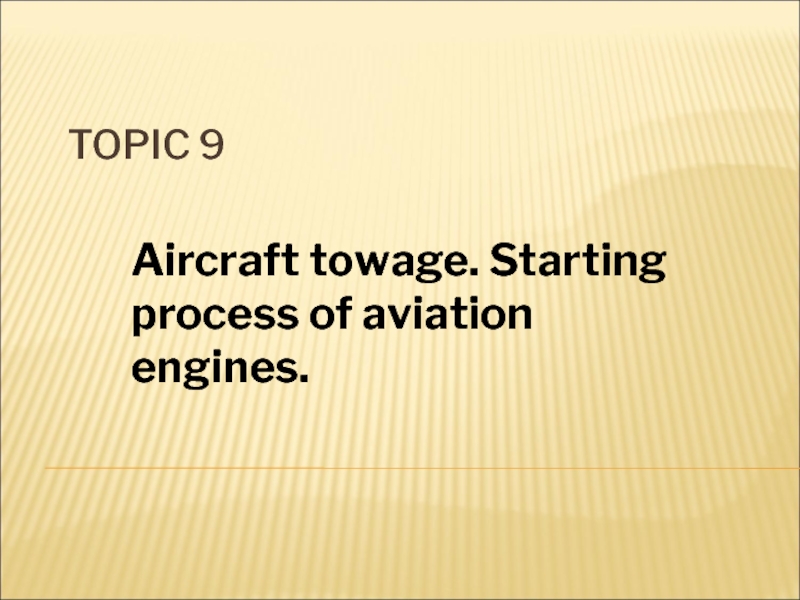 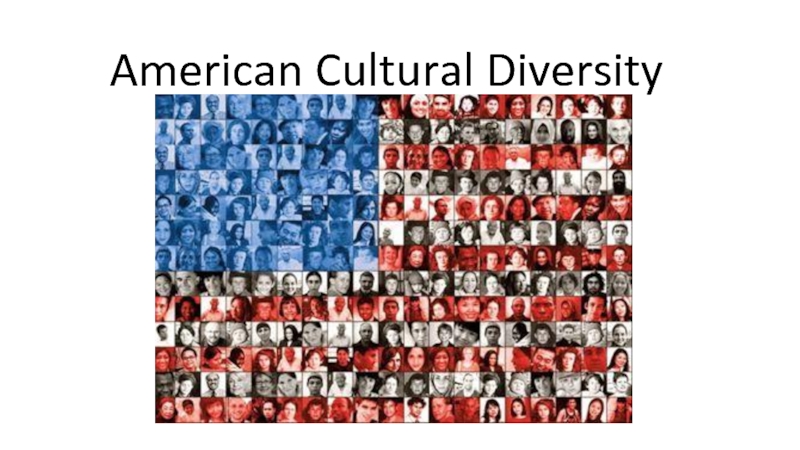