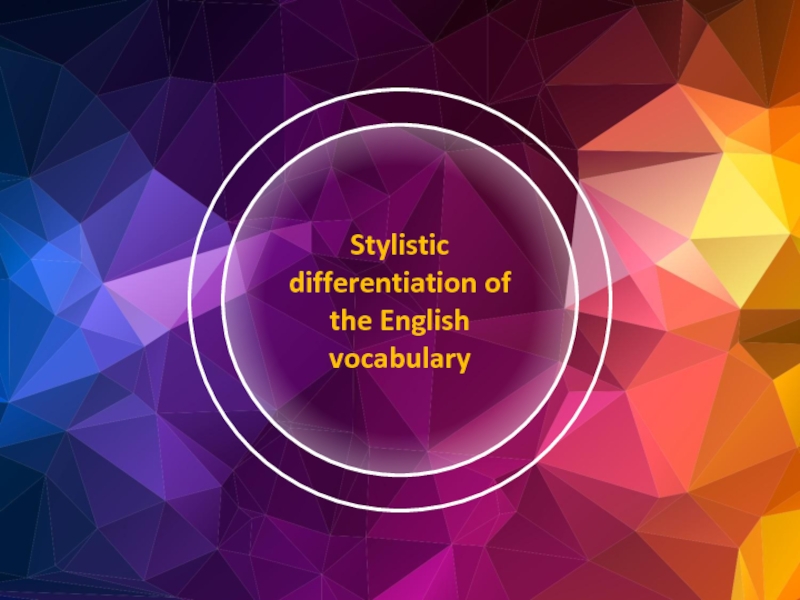 Stylistic differentiation of the English vocabulary 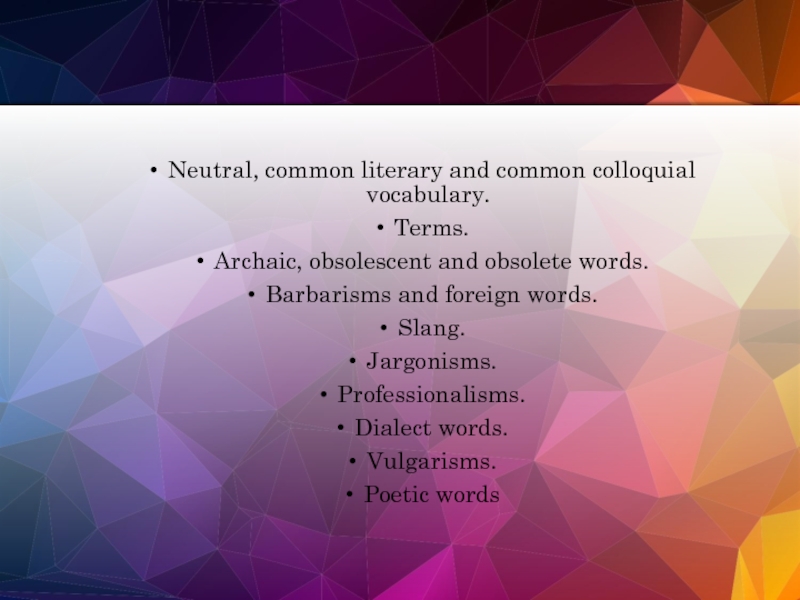 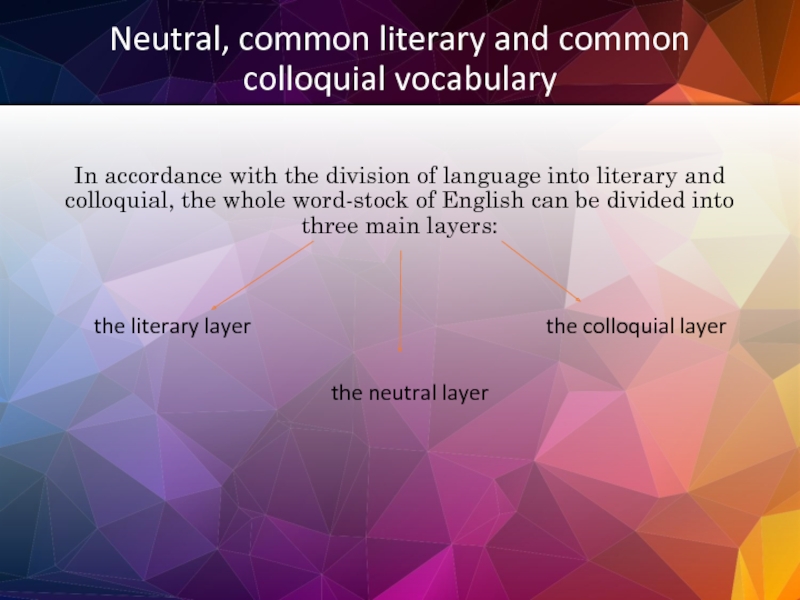 In accordance with the division of language into literary and colloquial, the whole word-stock of English can be divided into three main layers:


the literary layer the colloquial layer 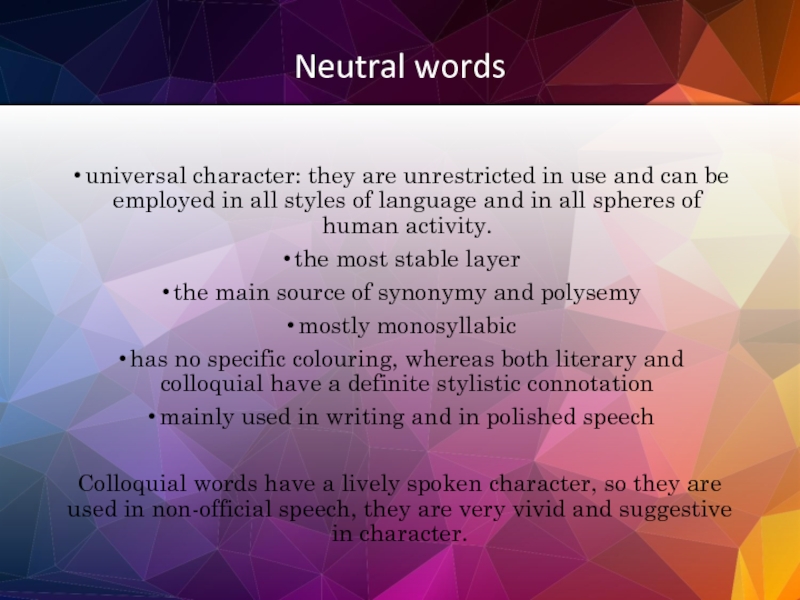 universal character: they are unrestricted in use and can be employed in all styles of language and in all spheres of human activity.
the most stable layer
the main source of synonymy and polysemy
mostly monosyllabic
has no specific colouring, whereas both literary and colloquial have a definite stylistic connotation
mainly used in writing and in polished speech

Colloquial words have a lively spoken character, so they are used in non-official speech, they are very vivid and suggestive in character. 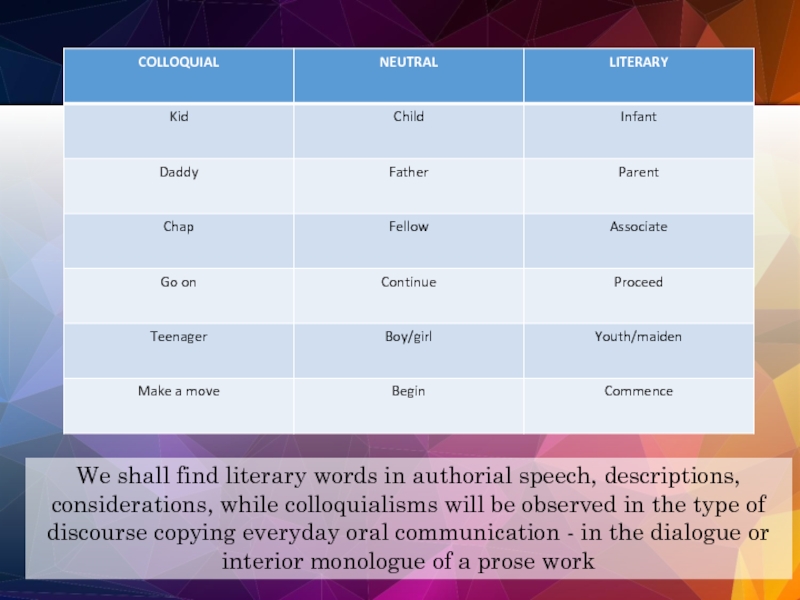 We shall find literary words in authorial speech, descriptions, considerations, while colloquialisms will be observed in the type of discourse copying everyday oral communication - in the dialogue or interior monologue of a prose work 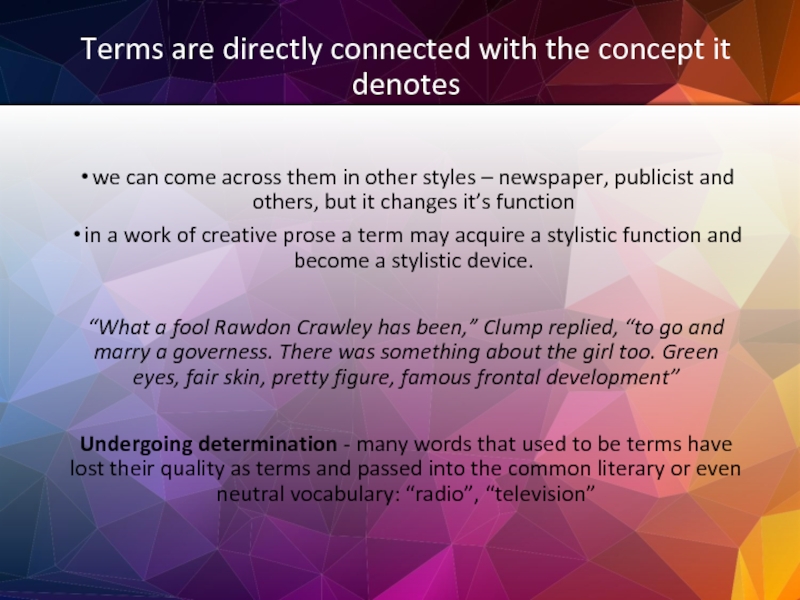 Terms are directly connected with the concept it denotes

we can come across them in other styles – newspaper, publicist and others, but it changes it’s function
in a work of creative prose a term may acquire a stylistic function and become a stylistic device.

“What a fool Rawdon Crawley has been,” Clump replied, “to go and marry a governess. There was something about the girl too. Green eyes, fair skin, pretty figure, famous frontal development”

Undergoing determination - many words that used to be terms have lost their quality as terms and passed into the common literary or even neutral vocabulary: “radio”, “television” 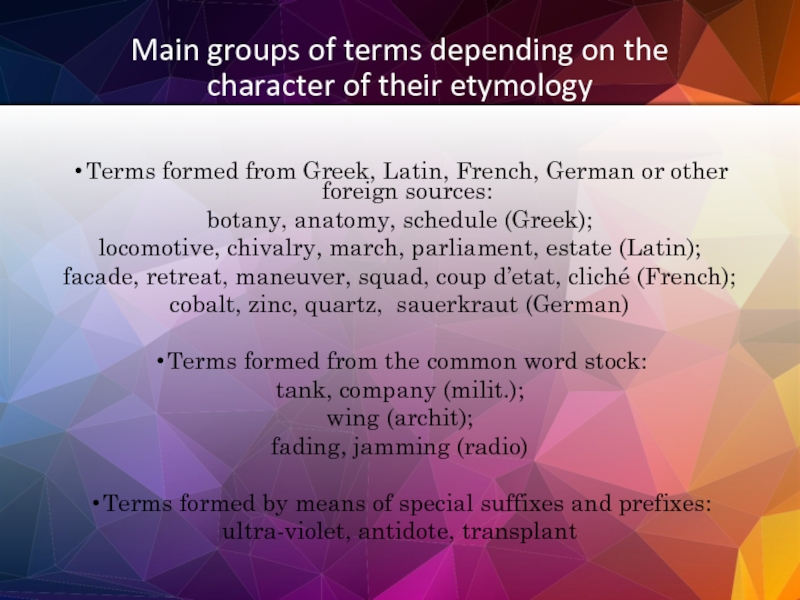 Main groups of terms depending on the character of their etymology 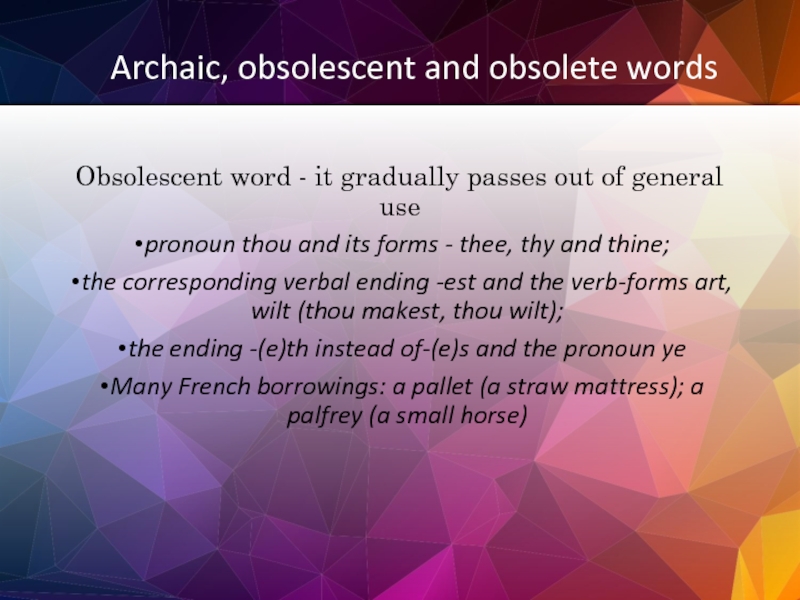 Obsolescent word - it gradually passes out of general use
pronoun thou and its forms - thee, thy and thine;
the corresponding verbal ending -est and the verb-forms art, wilt (thou makest, thou wilt);
the ending -(e)th instead of-(e)s and the pronoun ye
Many French borrowings: a pallet (a straw mattress); a palfrey (a small horse) 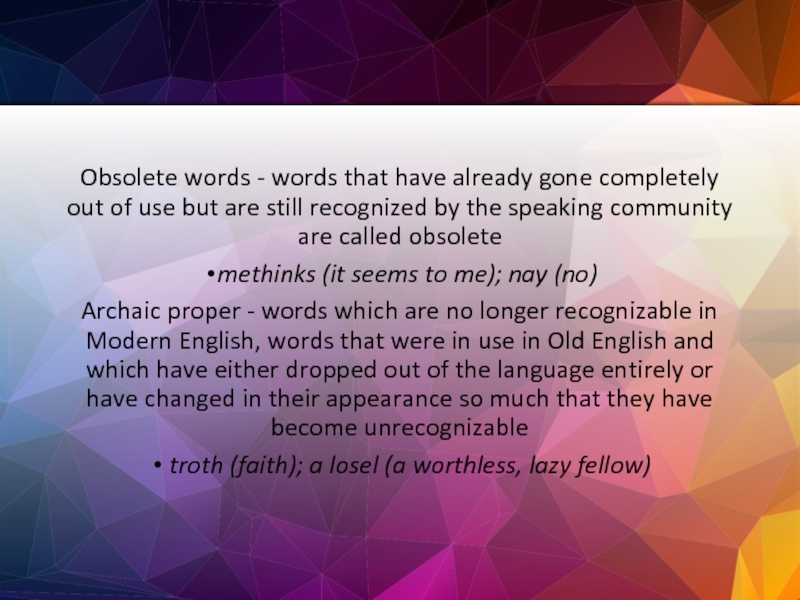 Obsolete words - words that have already gone completely out of use but are still recognized by the speaking community are called obsolete
methinks (it seems to me); nay (no)
Archaic proper - words which are no longer recognizable in Modern English, words that were in use in Old English and which have either dropped out of the language entirely or have changed in their appearance so much that they have become unrecog­nizable
troth (faith); a losel (a worthless, lazy fellow) 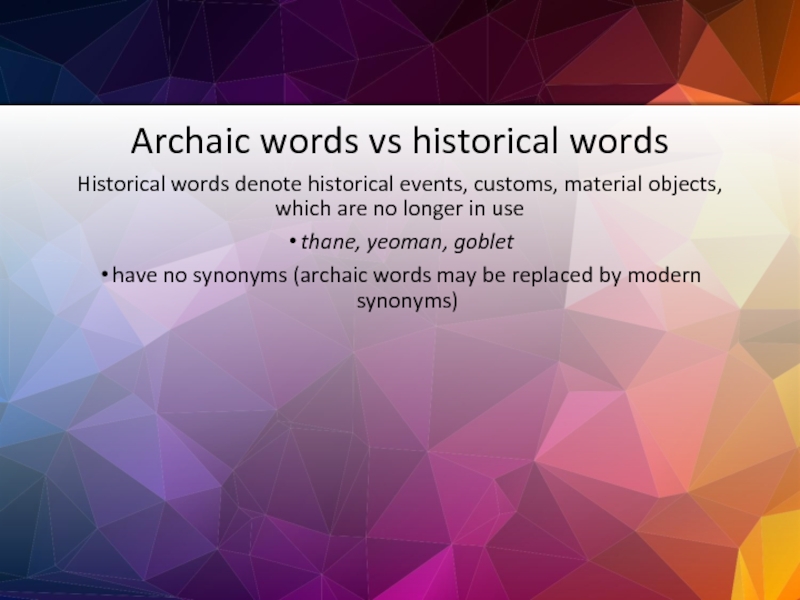 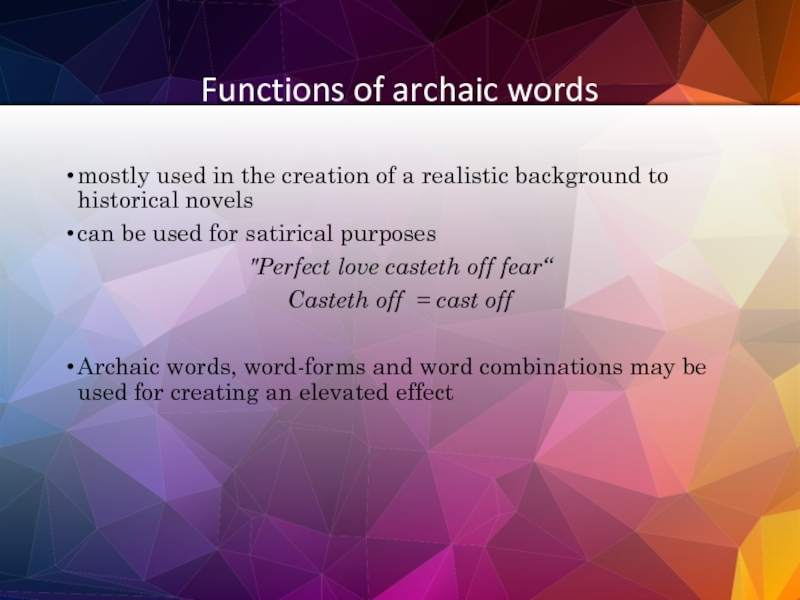 Archaic words, word-forms and word combinations may be used for creating an elevated effect 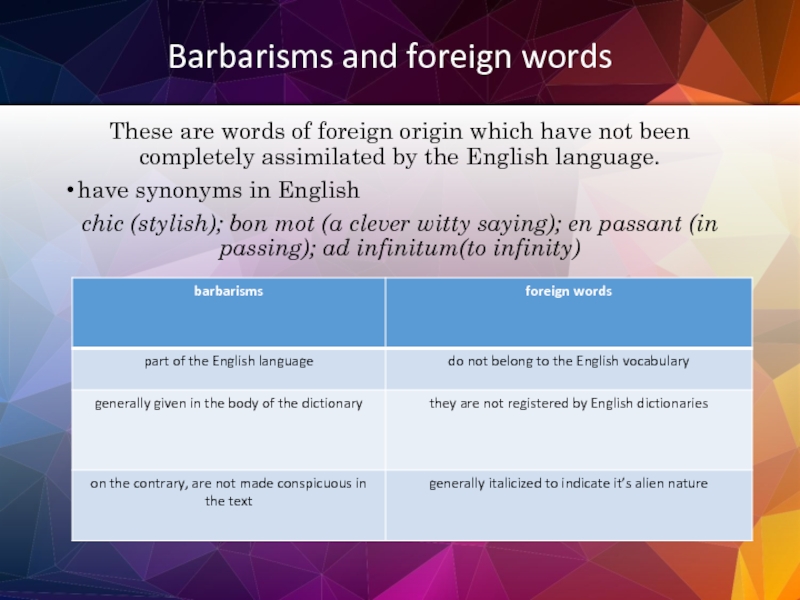 These are words of foreign origin which have not been completely assimilated by the English language.
have synonyms in English
chic (stylish); bon mot (a clever witty saying); en passant (in passing); ad infinitum(to infinity) 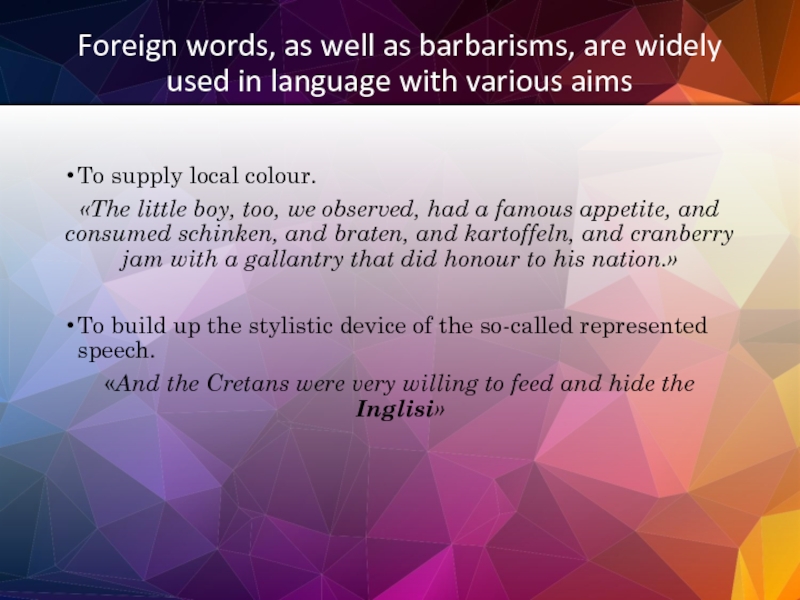 Foreign words, as well as barbarisms, are widely used in language with various aims

To supply local colour.
«The little boy, too, we observed, had a famous appetite, and consumed schinken, and braten, and kartoffeln, and cranberry jam with a gallantry that did honour to his nation.»

To build up the stylistic device of the so-called represented speech.
«And the Cretans were very willing to feed and hide the Inglisi» 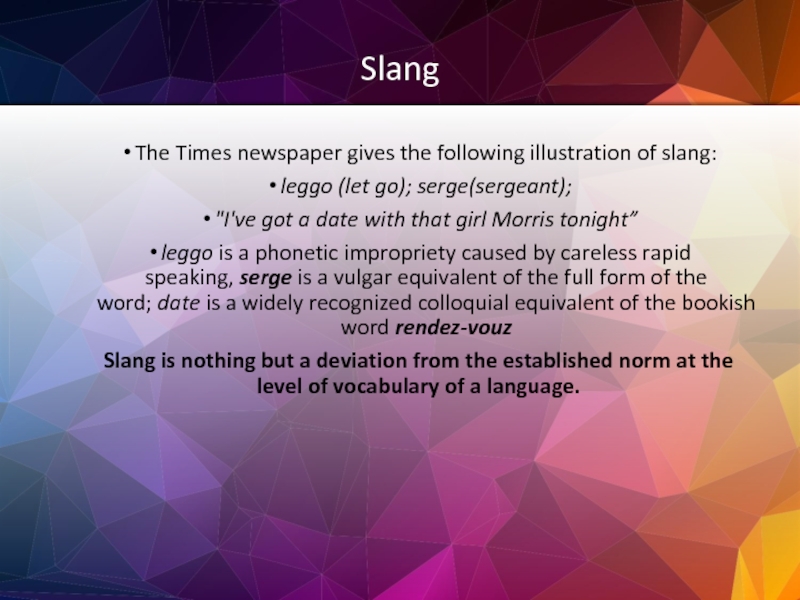 The Times newspaper gives the following illustration of slang:
leggo (let go); serge(sergeant);
"I've got a date with that girl Morris tonight”
leggo is a phonetic impropriety caused by careless rapid speaking, serge is a vulgar equivalent of the full form of the word; date is a widely recognized colloquial equivalent of the bookish word rendez-vouz
Slang is nothing but a deviation from the established norm at the level of vocabulary of a language. 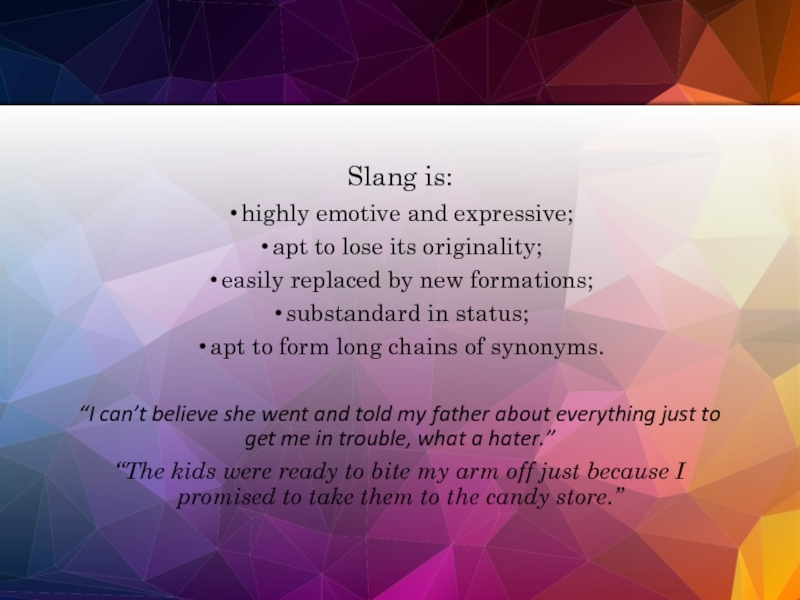 Slang is:
highly emotive and expressive;
apt to lose its originality;
easily replaced by new formations;
substandard in status;
apt to form long chains of synonyms.

“I can’t believe she went and told my father about everything just to get me in trouble, what a hater.”
“The kids were ready to bite my arm off just because I promised to take them to the candy store.” 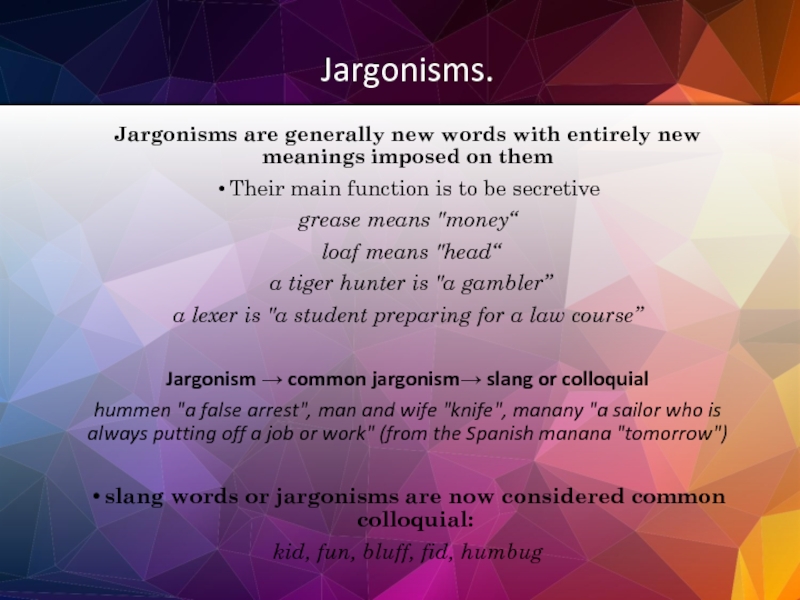 Jargonism → common jargonism→ slang or colloquial
hummen "a false arrest", man and wife "knife", manany "a sailor who is always putting off a job or work" (from the Spanish manana "tomorrow") 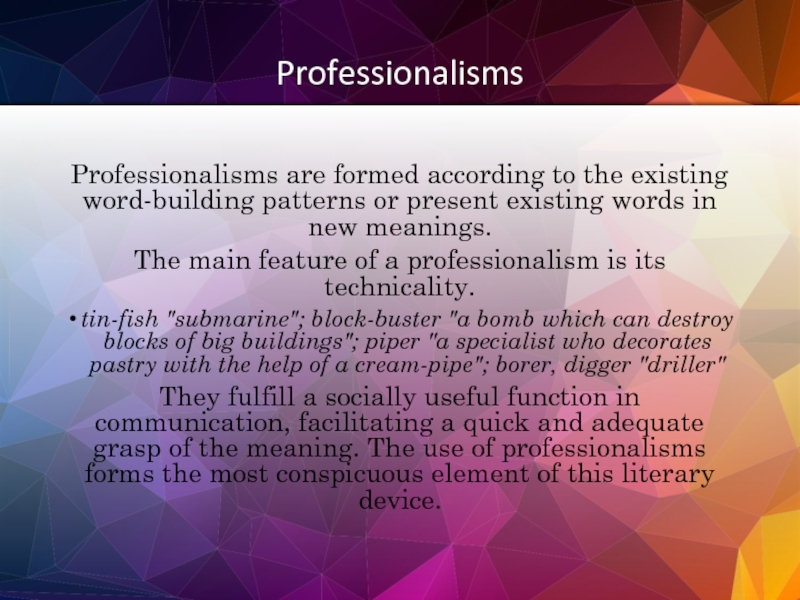 Professionalisms are formed according to the existing word-building patterns or present existing words in new meanings.
The main feature of a professionalism is its technicality.
tin-fish "submarine"; block-buster "a bomb which can destroy blocks of big buildings"; piper "a specialist who decorates pastry with the help of a cream-pipe"; borer, digger "driller"
They fulfill a socially useful function in communication, facilitating a quick and adequate grasp of the meaning. The use of professionalisms forms the most conspicuous element of this literary device. 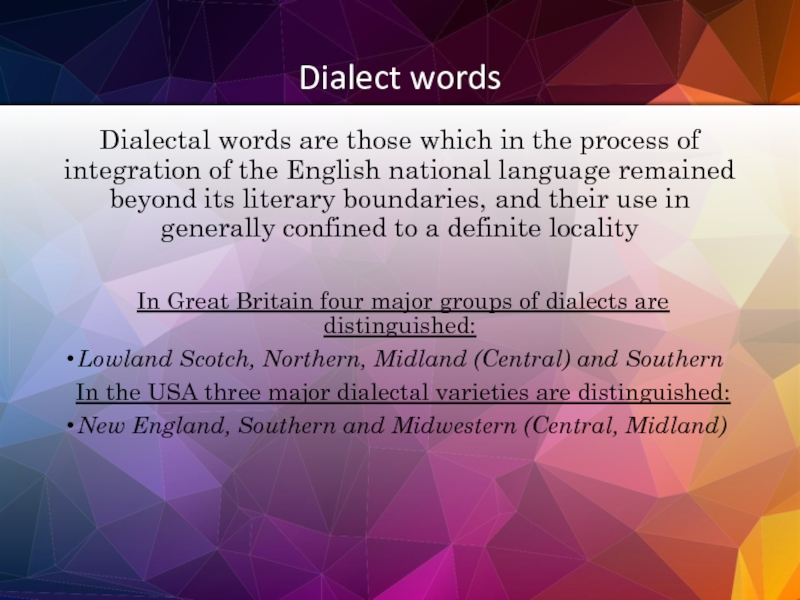 Dialectal words are those which in the process of integration of the English national language remained beyond its literary boundaries, and their use in generally confined to a definite locality 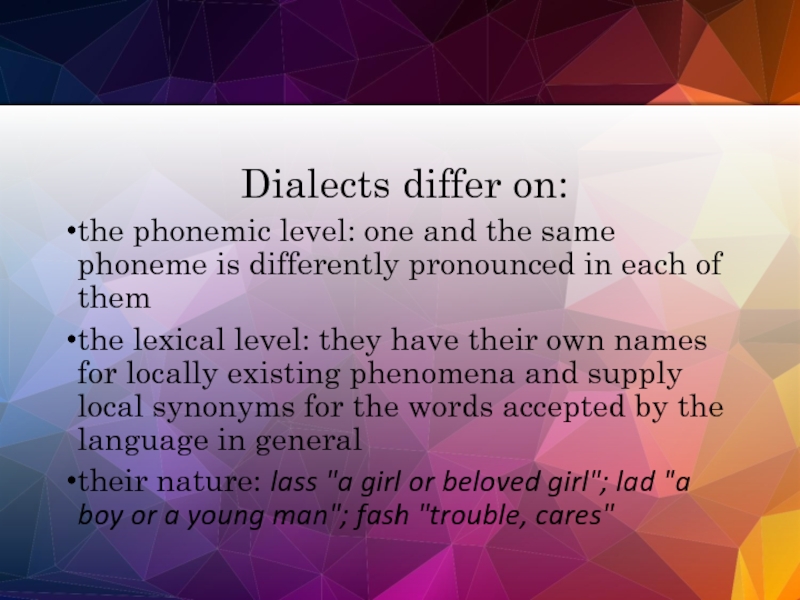 Dialects differ on:
the phonemic level: one and the same phoneme is differently pronounced in each of them
the lexical level: they have their own names for locally existing phenomena and supply local synonyms for the words accepted by the language in general
their nature: lass "a girl or beloved girl"; lad "a boy or a young man"; fash "trouble, cares" 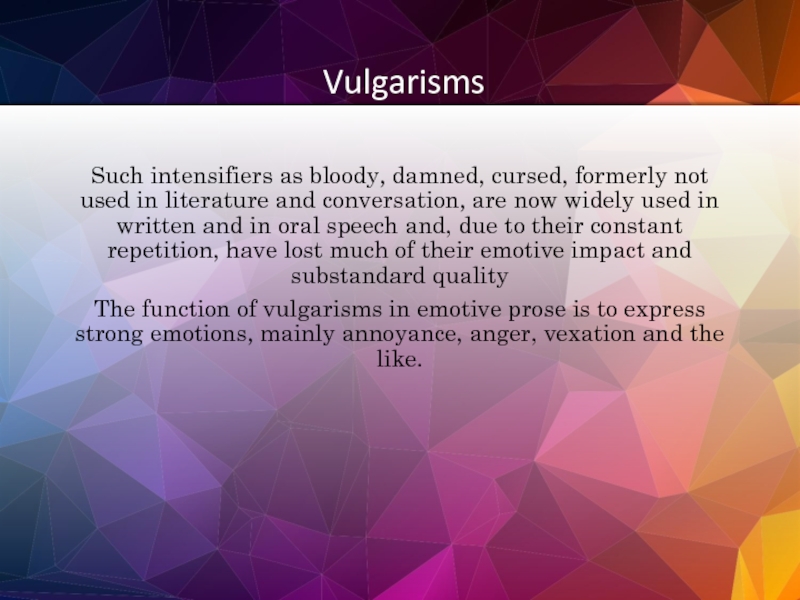 Such intensifiers as bloody, damned, cursed, formerly not used in literature and conversation, are now widely used in written and in oral speech and, due to their constant repetition, have lost much of their emotive impact and substandard quality
The function of vulgarisms in emotive prose is to express strong emotions, mainly annoyance, anger, vexation and the like. 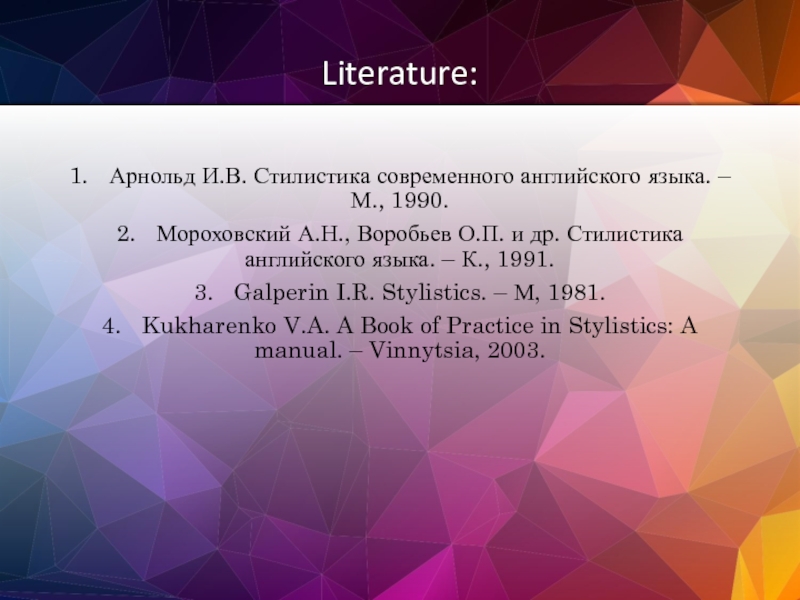 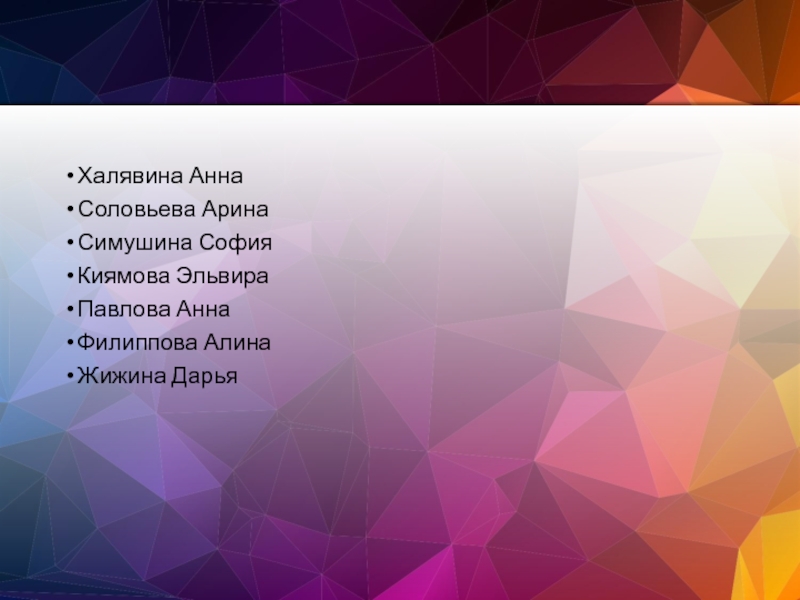 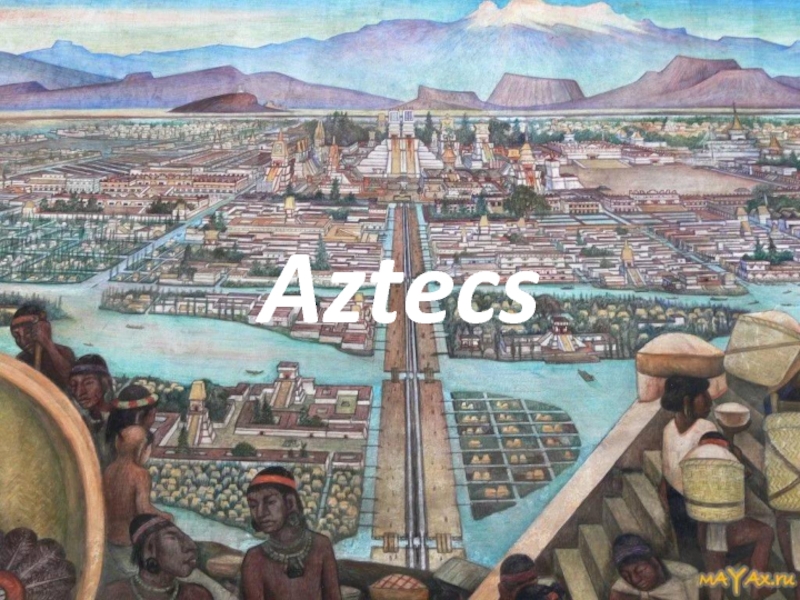 Aztecs. The Aztecs lived in Mexico 159 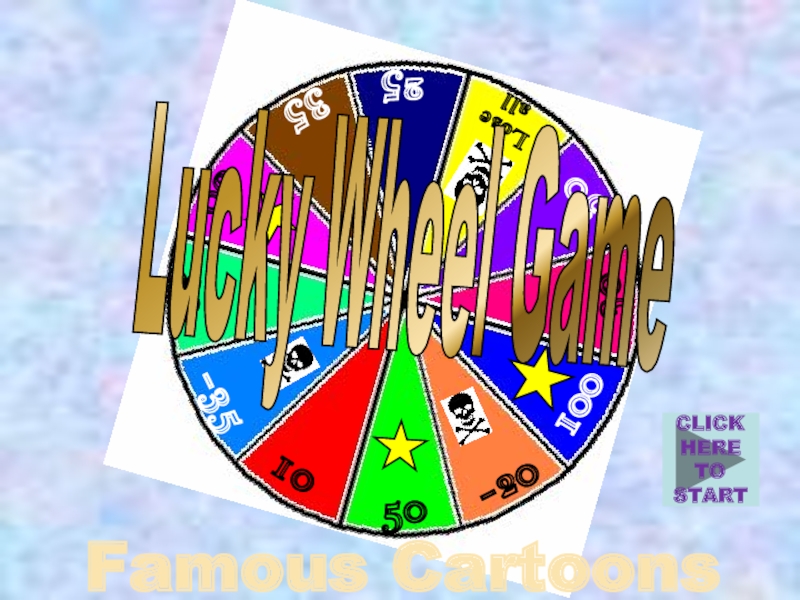 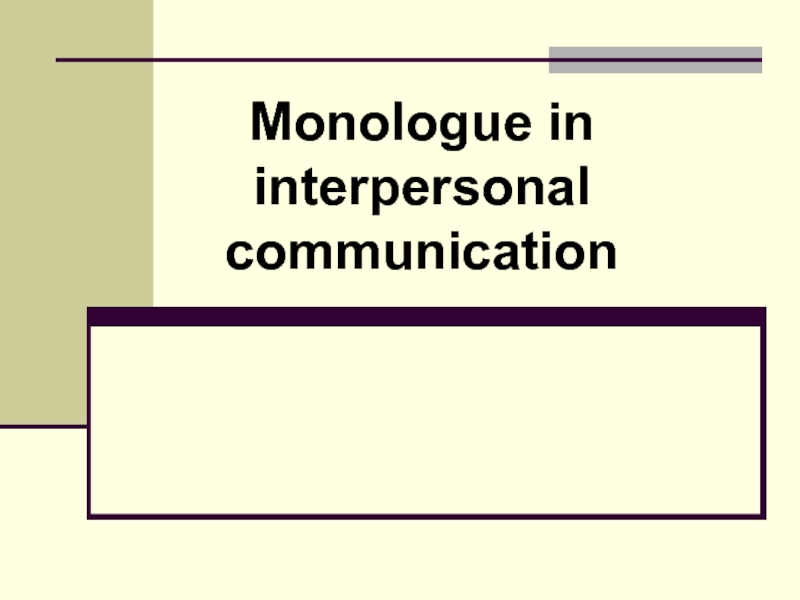 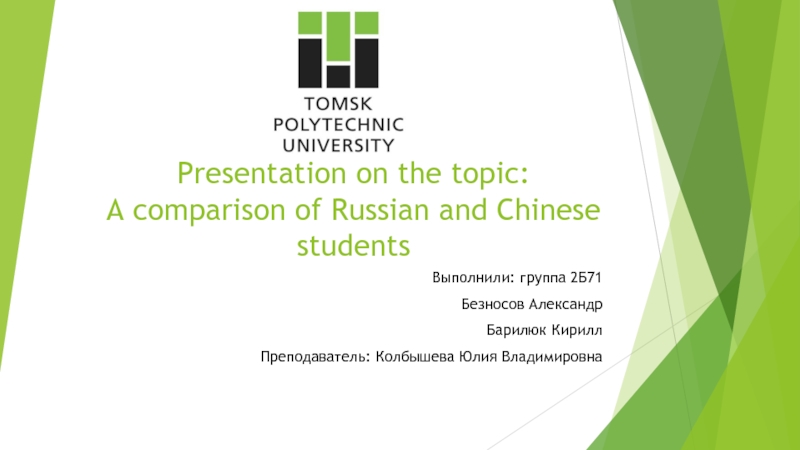 A comparison of Russian and Chinese students 174 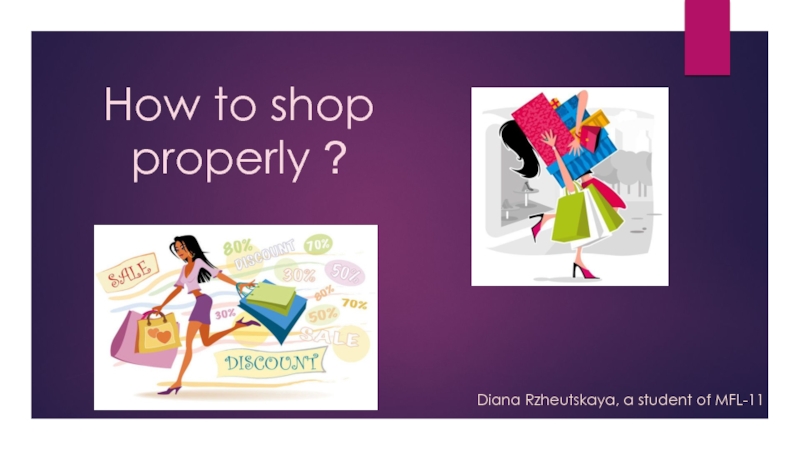 How to shop properly 140 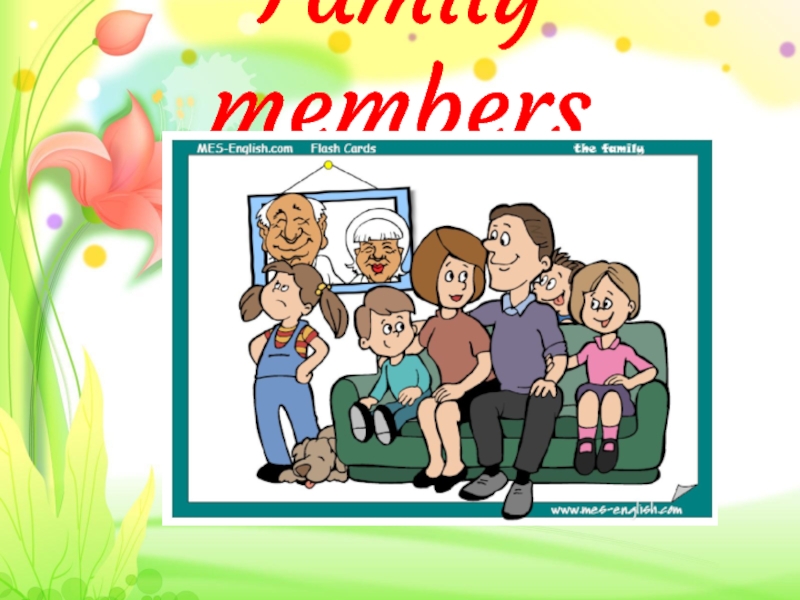