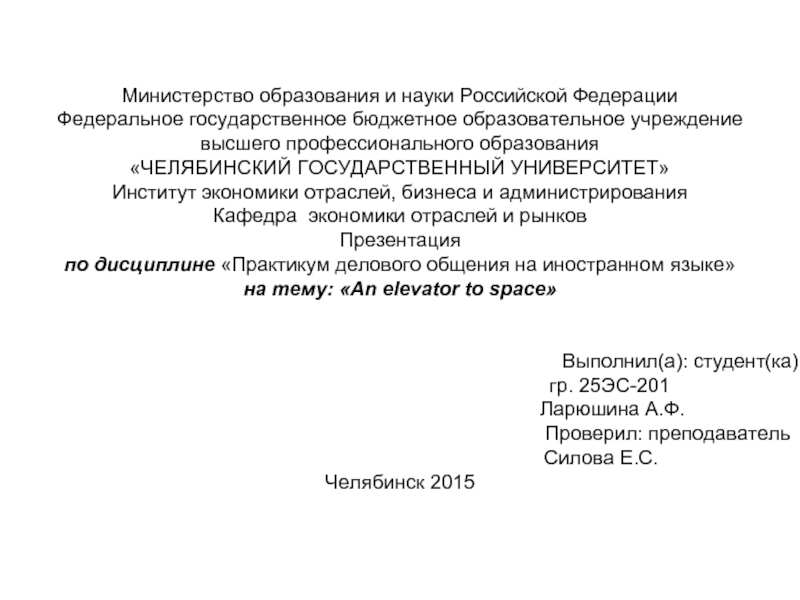 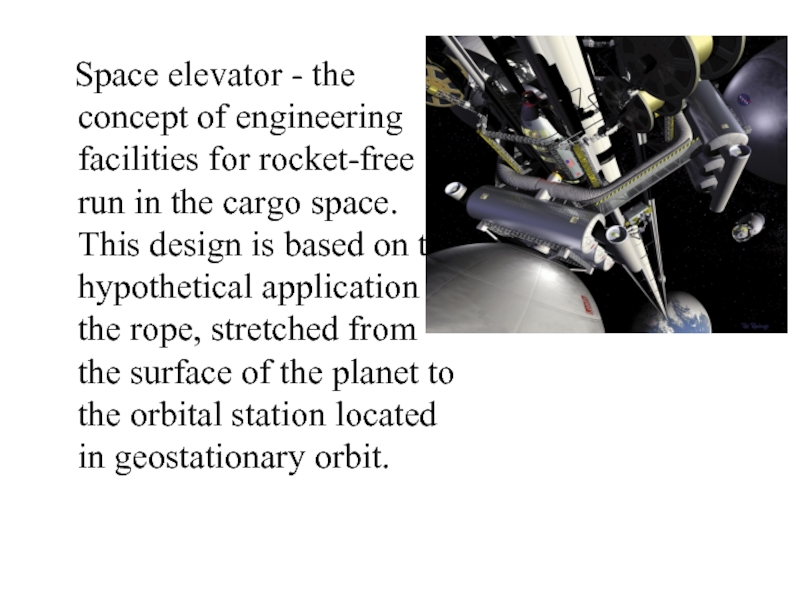 Space elevator - the concept of engineering facilities for rocket-free run in the cargo space. This design is based on the hypothetical application of the rope, stretched from the surface of the planet to the orbital station located in geostationary orbit. 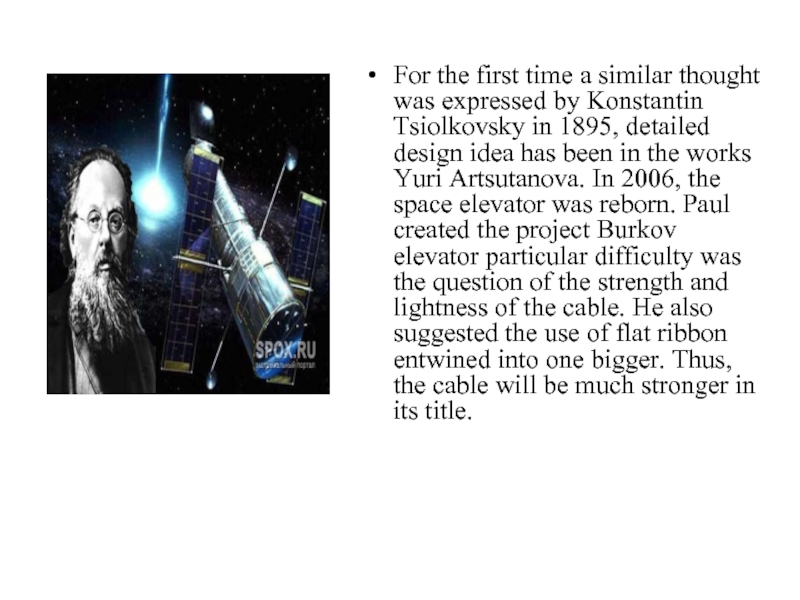 For the first time a similar thought was expressed by Konstantin Tsiolkovsky in 1895, detailed design idea has been in the works Yuri Artsutanova. In 2006, the space elevator was reborn. Paul created the project Burkov elevator particular difficulty was the question of the strength and lightness of the cable. He also suggested the use of flat ribbon entwined into one bigger. Thus, the cable will be much stronger in its title. 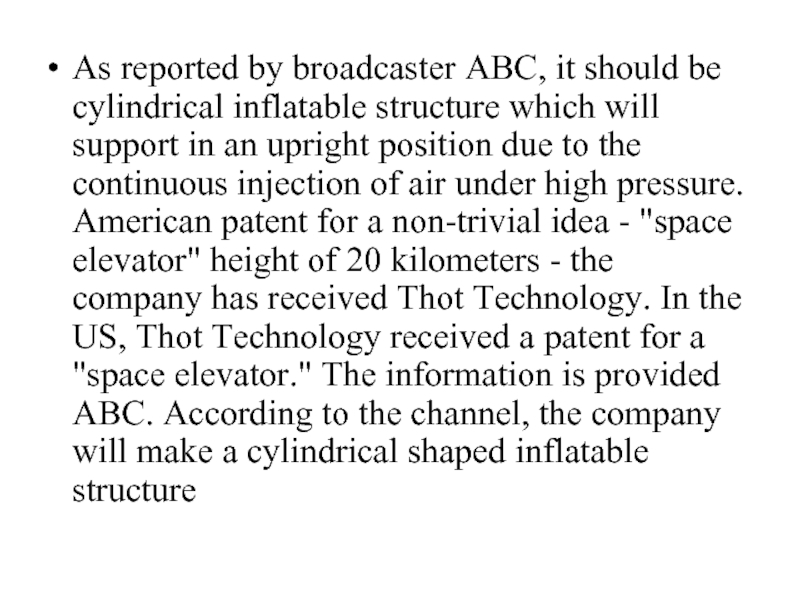 As reported by broadcaster ABC, it should be cylindrical inflatable structure which will support in an upright position due to the continuous injection of air under high pressure. American patent for a non-trivial idea - "space elevator" height of 20 kilometers - the company has received Thot Technology. In the US, Thot Technology received a patent for a "space elevator." The information is provided ABC. According to the channel, the company will make a cylindrical shaped inflatable structure 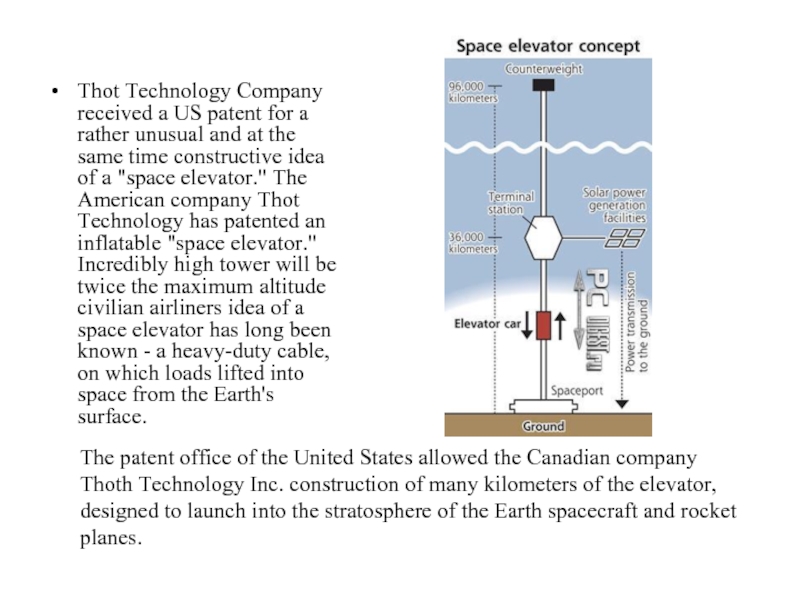 The patent office of the United States allowed the Canadian company Thoth Technology Inc. construction of many kilometers of the elevator, designed to launch into the stratosphere of the Earth spacecraft and rocket planes.

Three years ago, the Japanese engineers announced that they will build a space elevator in 2050. He will deliver the goods to a height of 96 kilometers. Enthusiasts believe that they could weave the cable out of nanotubes. US firms Thoth Technology Inc. issued US patent for the creation of a space elevator, which aims - the launch into orbit of ships and rocket planes, according to russia-on.rg. According to the creators, the lift height of 20 kilometers. 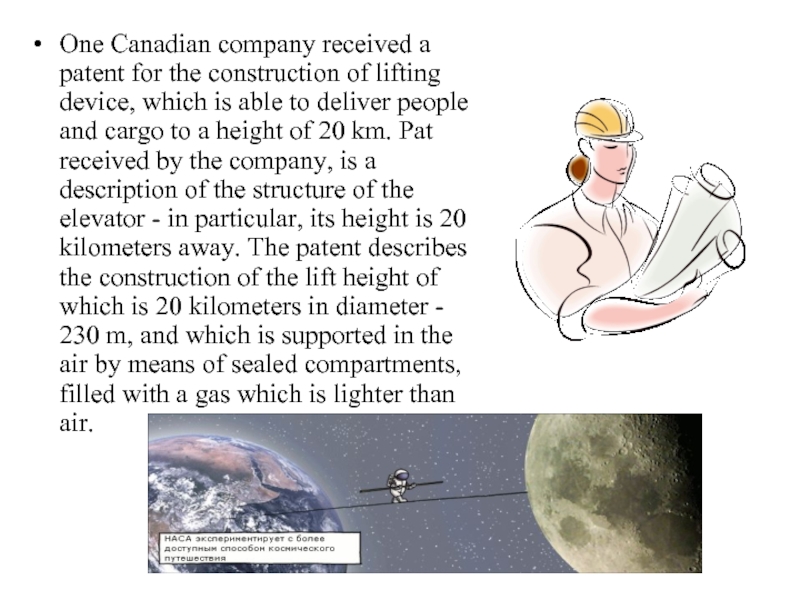 One Canadian company received a patent for the construction of lifting device, which is able to deliver people and cargo to a height of 20 km. Pat received by the company, is a description of the structure of the elevator - in particular, its height is 20 kilometers away. The patent describes the construction of the lift height of which is 20 kilometers in diameter - 230 m, and which is supported in the air by means of sealed compartments, filled with a gas which is lighter than air. 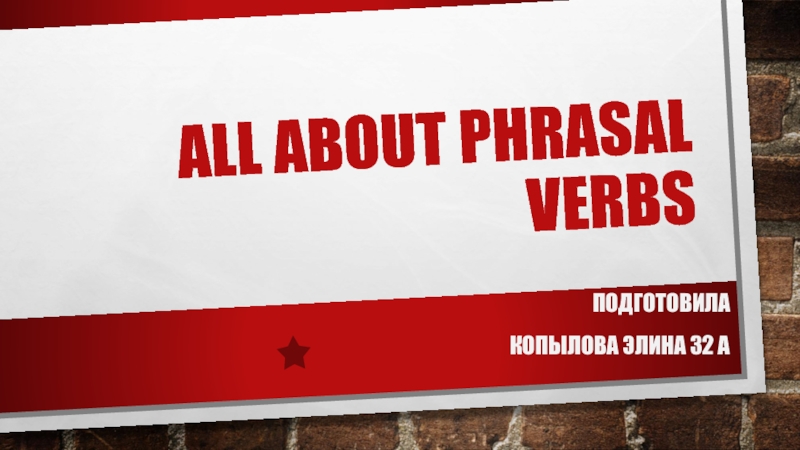 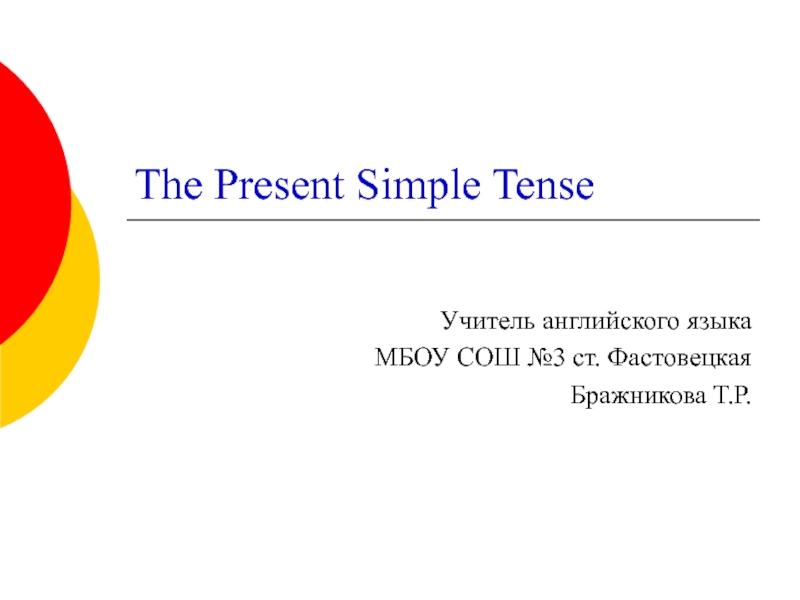 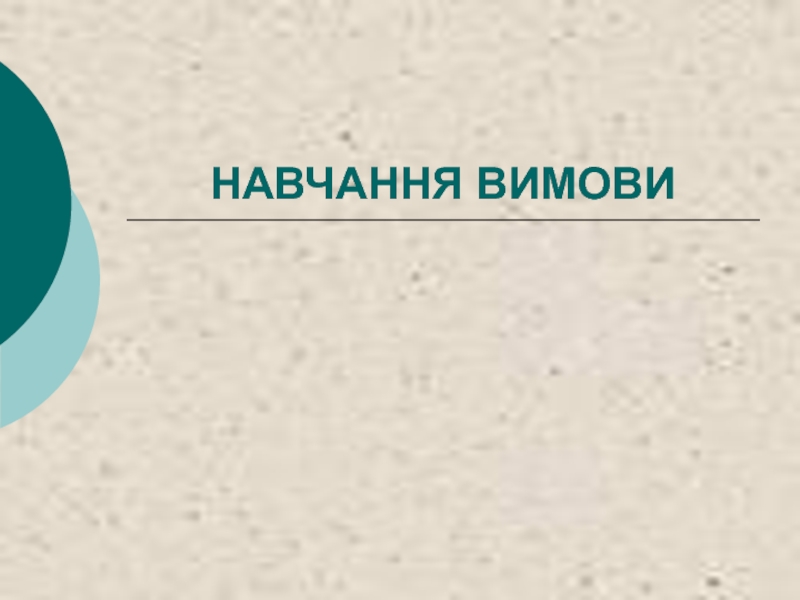 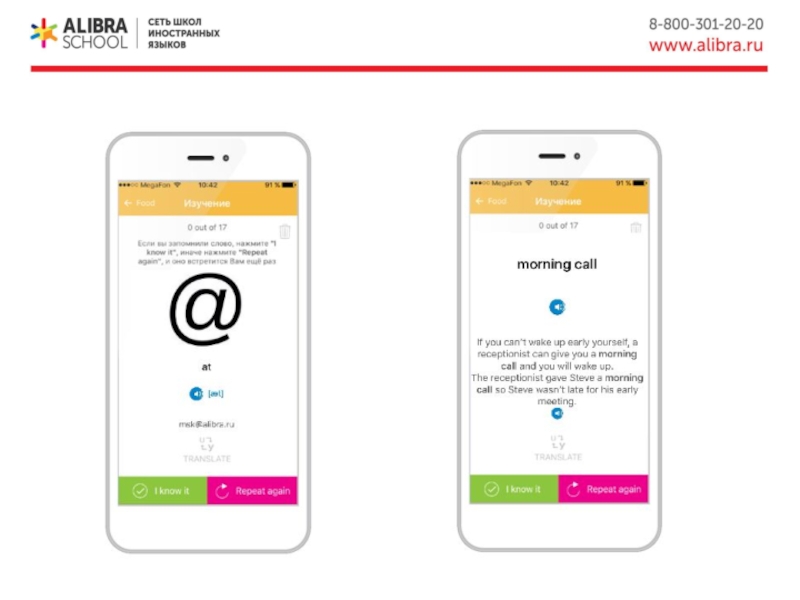 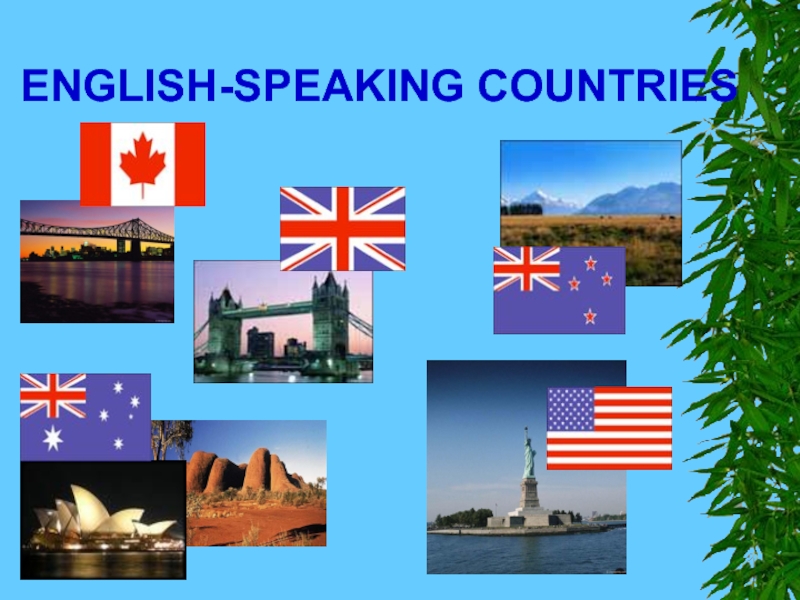 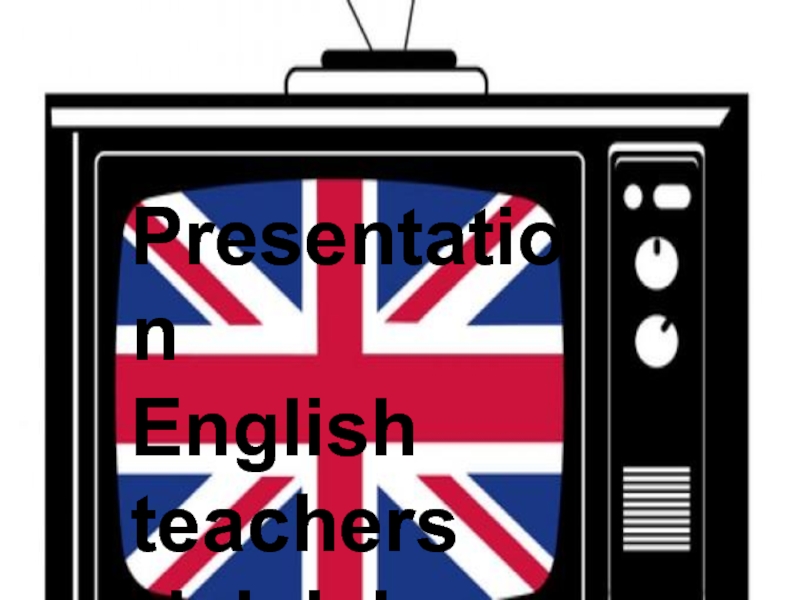