Lin Dan (born October 14, 1983) is a Chinese professional badminton player. He is a two-time Olympic champion, five-time World champion, as well as a six-time All England champion. 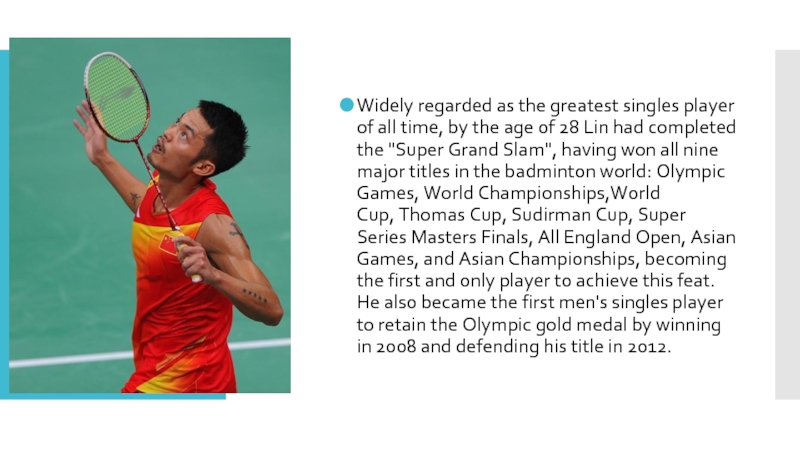 Widely regarded as the greatest singles player of all time, by the age of 28 Lin had completed the "Super Grand Slam", having won all nine major titles in the badminton world: Olympic Games, World Championships,World Cup, Thomas Cup, Sudirman Cup, Super Series Masters Finals, All England Open, Asian Games, and Asian Championships, becoming the first and only player to achieve this feat. He also became the first men's singles player to retain the Olympic gold medal by winning in 2008 and defending his title in 2012. 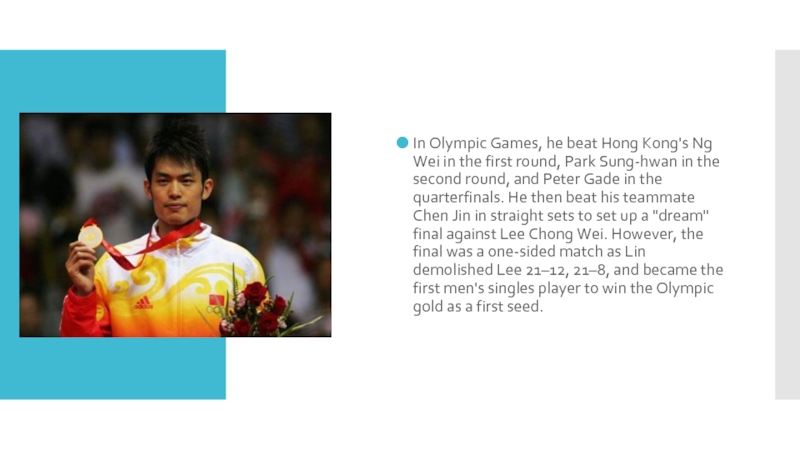 In Olympic Games, he beat Hong Kong's Ng Wei in the first round, Park Sung-hwan in the second round, and Peter Gade in the quarterfinals. He then beat his teammate Chen Jin in straight sets to set up a "dream" final against Lee Chong Wei. However, the final was a one-sided match as Lin demolished Lee 21–12, 21–8, and became the first men's singles player to win the Olympic gold as a first seed.

Lin won the Eddie Choong Player of the Year award for two consecutive years in 2006 and 2007. He also secured the BWF Best Male Player of the Year in 2008.[186] Lin was votedMost Valuable Player (MVP) during the 2010 Asian Games in Guangzhou, China. On January 16, 2011, he was voted as the 2010 best male athlete in CCTV Sports Personality of the Year for his clean sweep in major badminton titles.