1)WHAT IS LANGUAGE? 2)WHAT IS A LANGUAGE?

Origin: The English word “language” is derived from a Latin word “lingua” meaning "language; tongue”. Answers to the first question will give some characterization of language as a human capacity, or as a means of communication etc. , while with the second question we want to know what characterizes and distinguishes individual languages such as Azerbaijani, English or Turkish etc. 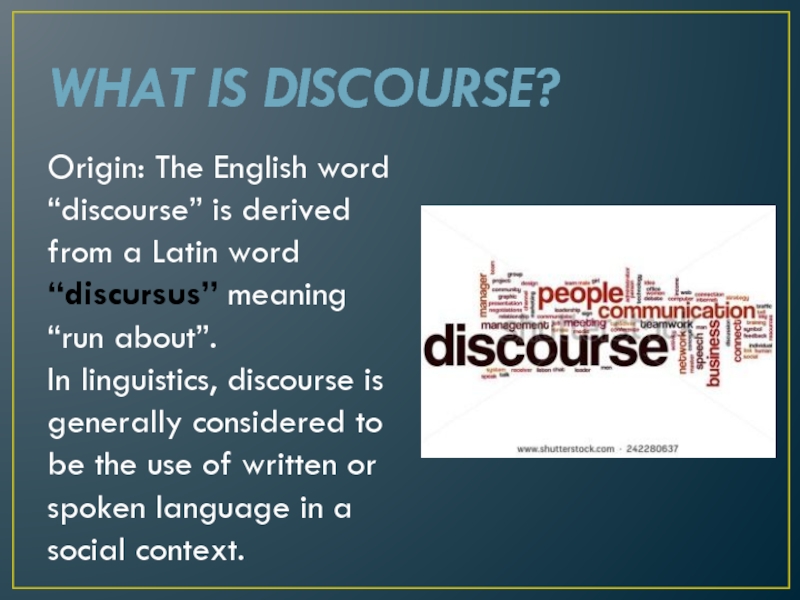 Origin: The English word “discourse” is derived from a Latin word “discursus” meaning “run about”. In linguistics, discourse is generally considered to be the use of written or spoken language in a social context.

Origin: The English word “culture” is derived from a Latin word “cultura” meaning “place tilled” (firstly used as an agricultural metaphor). Culture is the social behavior and norms found in human societies. Some aspects of human behavior, social practices such as culture, expressive forms such as art, music, dance, ritual, and religion, and technologies such as tool usage, cooking, shelter, and clothing are said to be cultural universals, found in all human societies.

Most people agree that language and culture are tightly connected. Some people also say “language is culture” or “culture is language”. However, such very general statements are not very helpful – what do they mean? If culture and language were simply the same, why would we need two different labels? Not all expressions of culture require language, and not all aspects of language are culture-dependent. It would be better to say a language is a part of a culture and a culture is a part of a language.

RELATIONSHIP BETWEEN LANGUAGE AND CULTURE

The language expresses facts, ideas or events that are communicable because they refer to a stock of knowledge about the world that other people share. People of different cultures can refer to different things while using the same language forms. For example, when one says lunch, an Englishman may be referring to hamburger or pizza, but a Chinese man will most probably be referring to steamed bread or rice. In a word the language is the mirror of culture, in the sense people can see a culture through its language. 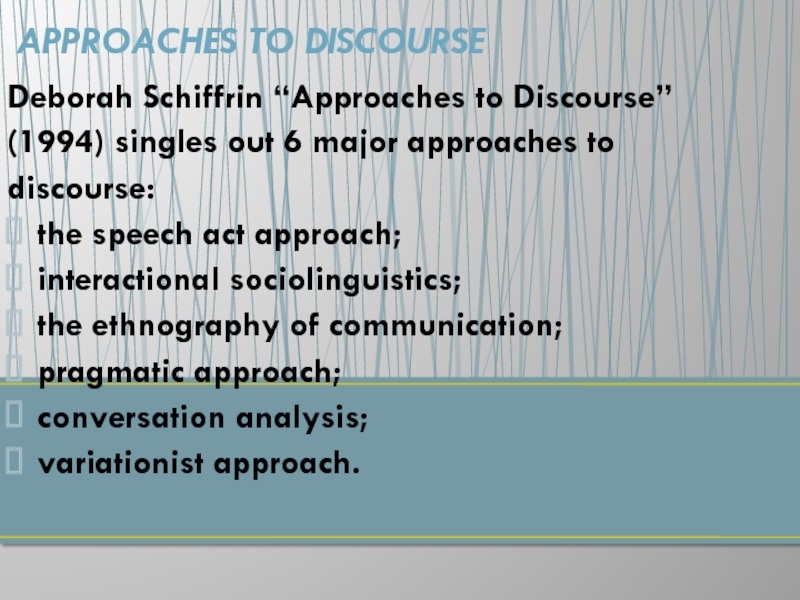 THE ETHNOGRAPHY OF COMMUNICATION (1)

The most influential approach to discourse and culture studies is known as the ‘ethnography of communication’. It was founded by Dell Hymes (1962). This was a time when linguistic theorizing was dominated by Chomsky’s concepts of grammar and of linguistic competence, notions focused on the structural aspects of language rather than on language in use. Hymes emphasized that to be a competent speaker calls for much more than grammatical knowledge. It means knowing how to speak in culturally appropriate ways to different people about different things in different settings. He coined the term ‘communicative competence’ to take in all these things, along with the knowledge of language structure. As a way of studying communicative competence, Hymes suggested research should focus on what he called the ‘speech events’ of different cultures. These are culturally recognized activities involving speech; for instance, in English, a gossip session, a sermon, a job-interview, or a crossexamination in court. 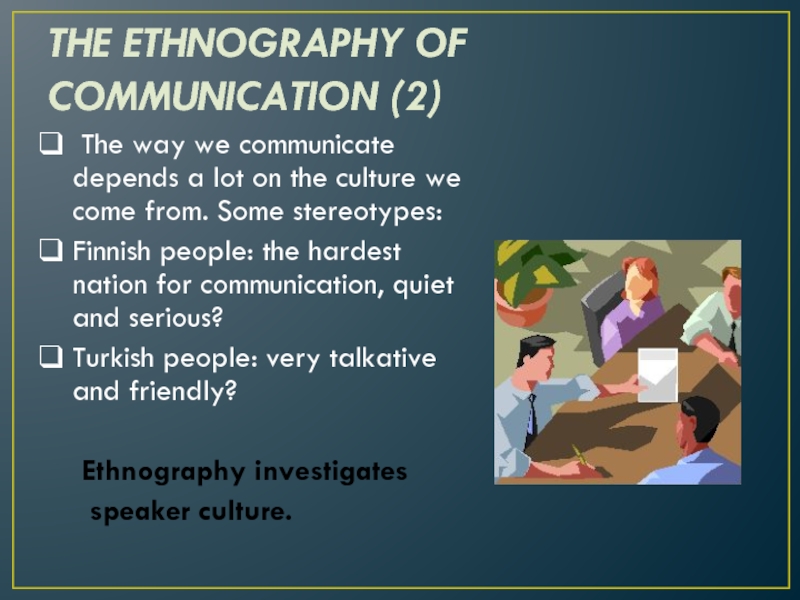 THE ETHNOGRAPHY OF COMMUNICATION (2)

The way we communicate depends a lot on the culture we come from. Some stereotypes:
Finnish people: the hardest nation for communication, quiet and serious?
Turkish people: very talkative and friendly?

TWO FURTHER APPROACHES TO STUDYING THE CULTURAL ASPECTS OF DISCOURSE ARE :

Linguistic anthropology is conducted within the discipline of anthropology. It is directed toward understanding how language use fits in with, and indeed helps to constitute, the larger culture. This work often looks at cultural practices in superb detail, as for instance, in the works in Watson-Gegeo and White (1990) on conflict resolution in the Pacific, or those in Schieffelin and Ochs (1986) on socialization strategies.

Intercultural studies and cultural commentaries (for example, Mitzutani and Mitzutani, 1987) usually focus on national-level societies such as Japan or China, comparing them with mainstream Anglo-American culture. Often the motivation is a desire to reduce culturally based misunderstandings in business or international relations. 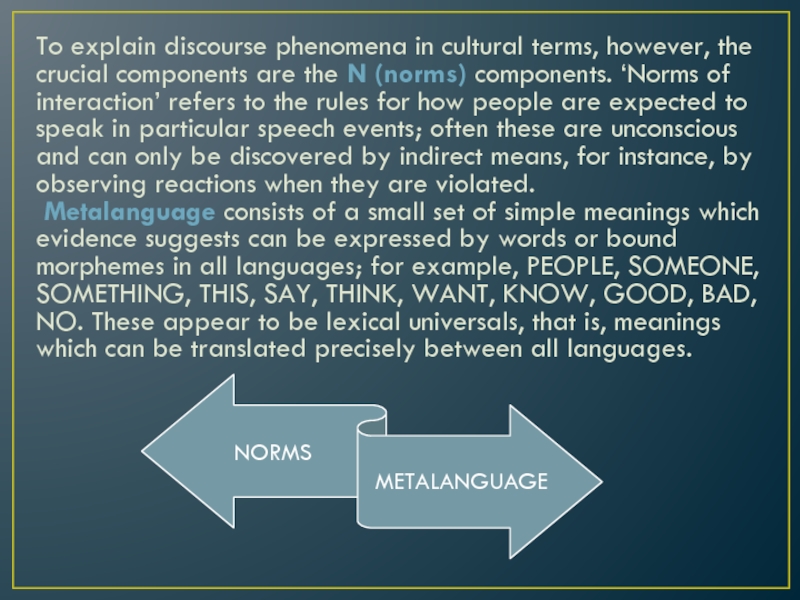 To explain discourse phenomena in cultural terms, however, the crucial components are the N (norms) components. ‘Norms of interaction’ refers to the rules for how people are expected to speak in particular speech events; often these are unconscious and can only be discovered by indirect means, for instance, by observing reactions when they are violated. Metalanguage consists of a small set of simple meanings which evidence suggests can be expressed by words or bound morphemes in all languages; for example, PEOPLE, SOMEONE, SOMETHING, THIS, SAY, THINK, WANT, KNOW, GOOD, BAD, NO. These appear to be lexical universals, that is, meanings which can be translated precisely between all languages. 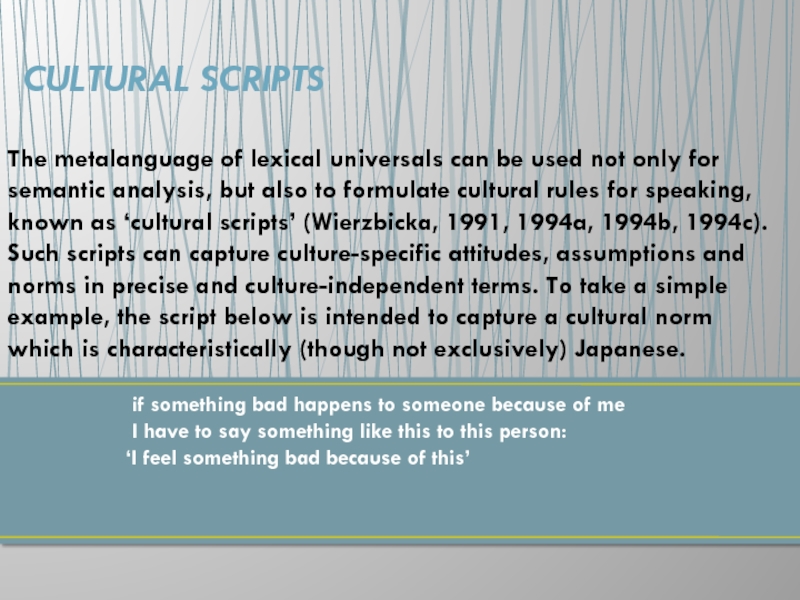 The metalanguage of lexical universals can be used not only for semantic analysis, but also to formulate cultural rules for speaking, known as ‘cultural scripts’ (Wierzbicka, 1991, 1994a, 1994b, 1994c). Such scripts can capture culture-specific attitudes, assumptions and norms in precise and culture-independent terms. To take a simple example, the script below is intended to capture a cultural norm which is characteristically (though not exclusively) Japanese. if something bad happens to someone because of me I have to say something like this to this person: ‘I feel something bad because of this’ 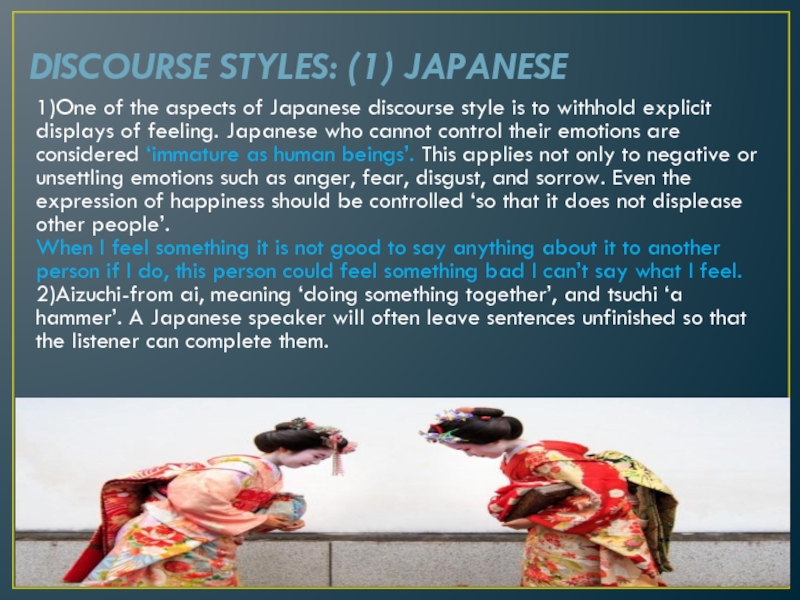 1)One of the aspects of Japanese discourse style is to withhold explicit displays of feeling. Japanese who cannot control their emotions are considered ‘immature as human beings’. This applies not only to negative or unsettling emotions such as anger, fear, disgust, and sorrow. Even the expression of happiness should be controlled ‘so that it does not displease other people’. When I feel something it is not good to say anything about it to another person if I do, this person could feel something bad I can’t say what I feel. 2)Aizuchi-from ai, meaning ‘doing something together’, and tsuchi ‘a hammer’. A Japanese speaker will often leave sentences unfinished so that the listener can complete them. 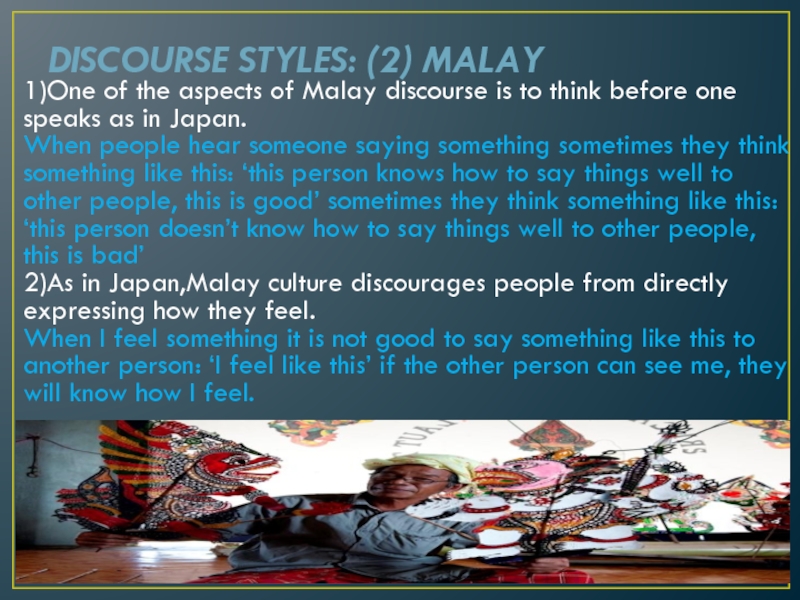 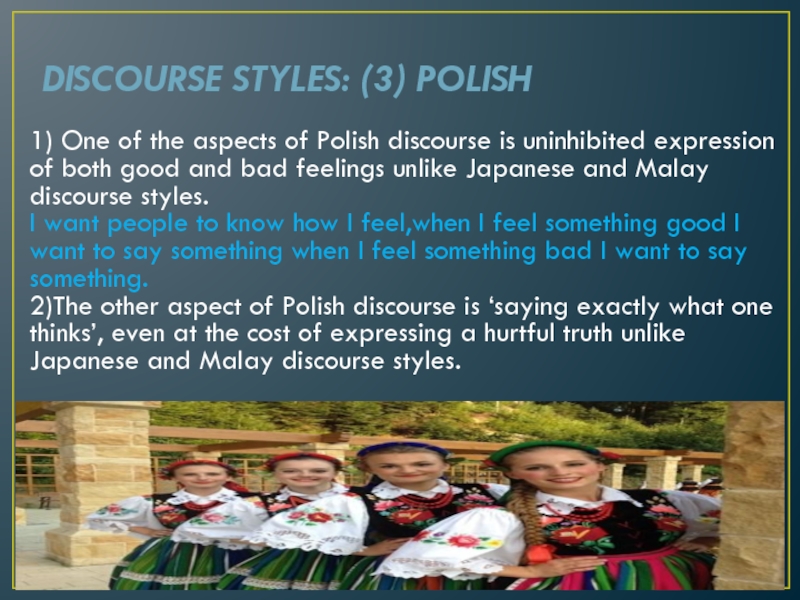 1) One of the aspects of Polish discourse is uninhibited expression of both good and bad feelings unlike Japanese and Malay discourse styles. I want people to know how I feel,when I feel something good I want to say something when I feel something bad I want to say something. 2)The other aspect of Polish discourse is ‘saying exactly what one thinks’, even at the cost of expressing a hurtful truth unlike Japanese and Malay discourse styles. 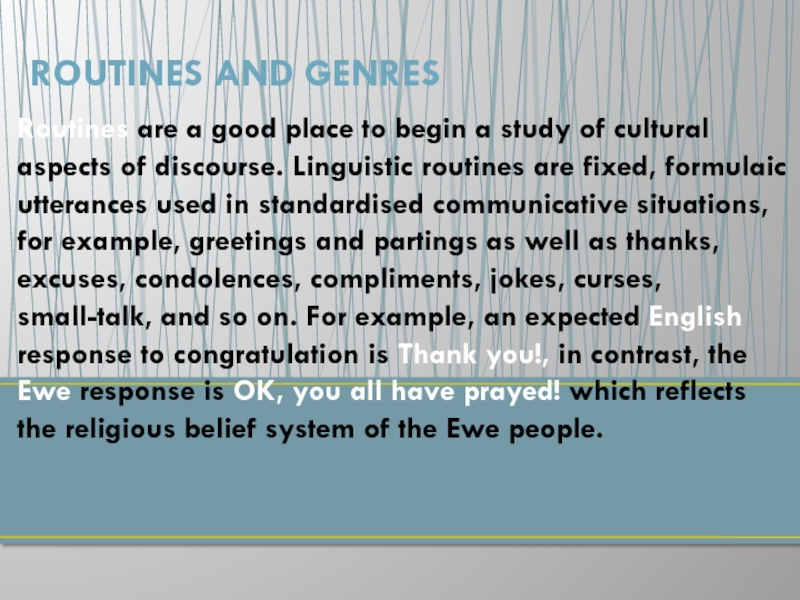 Routines are a good place to begin a study of cultural aspects of discourse. Linguistic routines are fixed, formulaic utterances used in standardised communicative situations, for example, greetings and partings as well as thanks, excuses, condolences, compliments, jokes, curses, small-talk, and so on. For example, an expected English response to congratulation is Thank you!, in contrast, the Ewe response is OK, you all have prayed! which reflects the religious belief system of the Ewe people.

Like English ‘jokes’, however, kawaty are intended to promote pleasant togetherness,the implication is: I can tell you, but there are people who I couldn’t tell. Podanie is a special, written communication between an ordinary person and the ‘authorities’, in which the author asks for favours and presents him or herself as dependent on their goodwill. Needless to say, the very existence of this genre reflects the dominance over ordinary people of a communist bureaucracy . The podanie typically starts with such phrases as ‘I ask politely’ or ‘hereby I address you politely to request a favour’, which would be quite out of place in an ‘application’.

1)For communication with foreign people
2)For reading and understanding foreign literature 3)For translators,who have to convey the exact meaning of the linguistic realities,for example-Gretna Green marriage, etc. 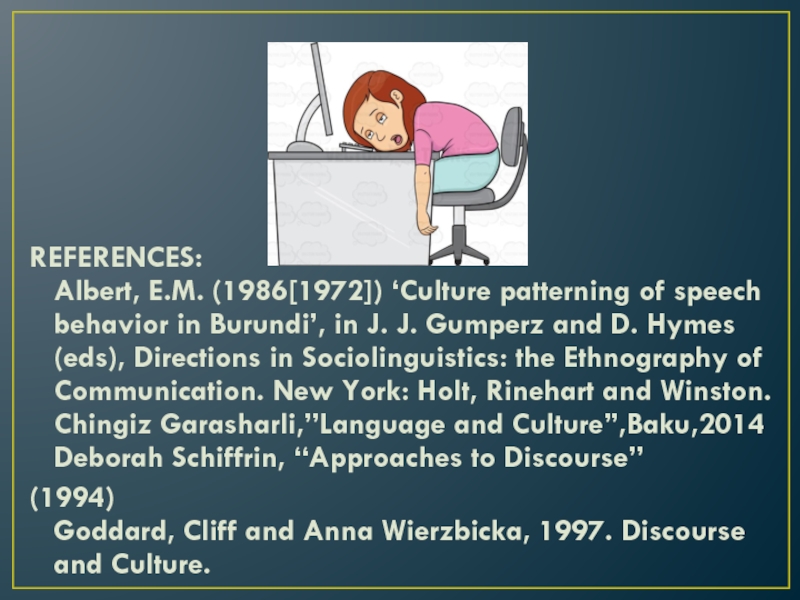 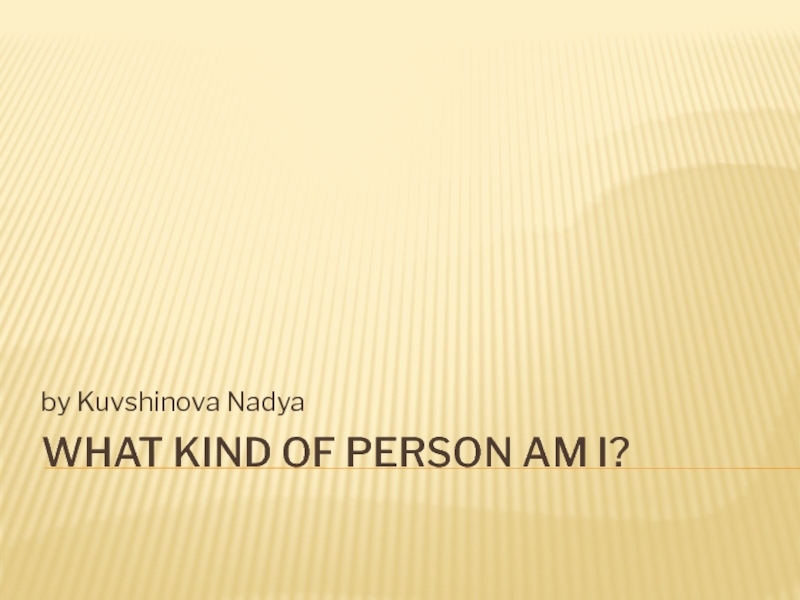 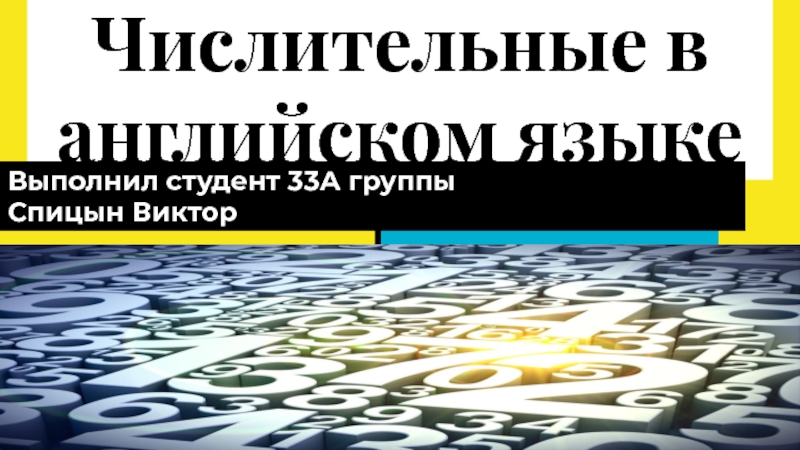